How A No-Touch Thermometer Detects A Fever

How A No-Touch Thermometer Detects A Fever 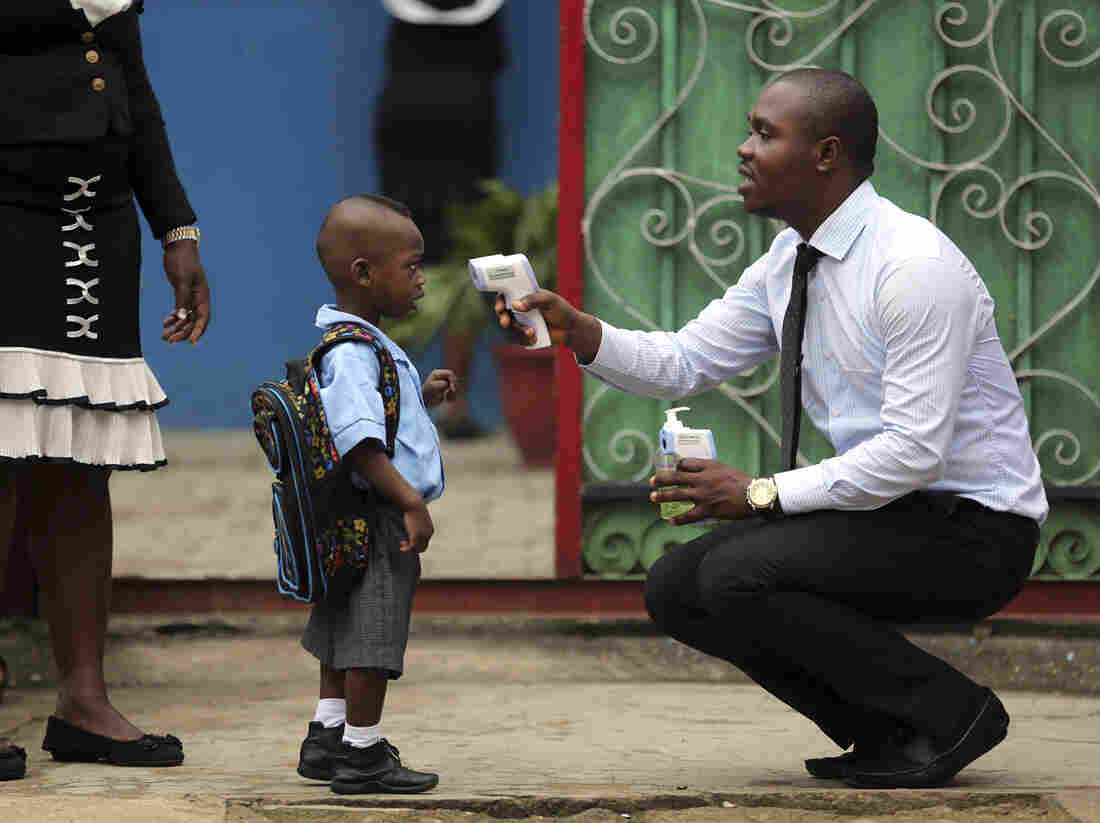 A school official shows a pupil an infrared digital laser thermometer before taking his temperature in Lagos, Nigeria, in September. Starting this week, similar hand-held devices are checking foreheads for fever at some U.S. airports. Akintunde Akinleye/Reuters/Landov hide caption 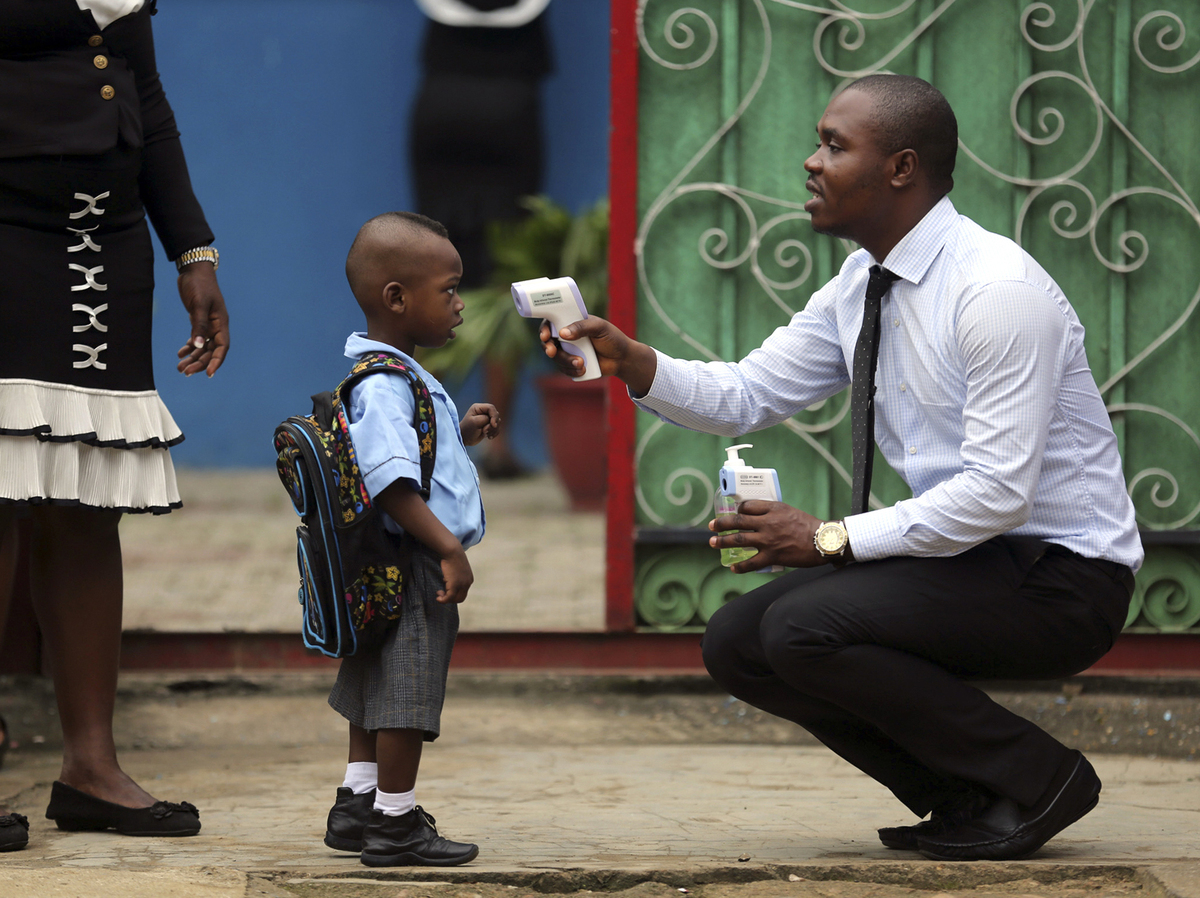 A school official shows a pupil an infrared digital laser thermometer before taking his temperature in Lagos, Nigeria, in September. Starting this week, similar hand-held devices are checking foreheads for fever at some U.S. airports.

In the battle to stop Ebola's spread, health officials worldwide have been deploying thermometers in hopes of detecting the earliest symptoms among people who might be sick. The no-contact thermometer, already broadly used in some airports in Africa, has come to U.S. airports this week — now at New York's John F. Kennedy Airport, and, starting Thursday, at D.C.'s Dulles, Chicago's O'Hare, Atlanta's Hartsfield-Jackson, and Newark's Liberty.

The goal is to detect fever; for public screening purposes, according to guidance from the Centers for Disease Control and Prevention, an elevated temperature higher than 100.4 Fahrenheit (if you have reason to think you might have been exposed to Ebola) merits follow-up.

Of course, lots of illnesses — many that are mild and others that are severe — can cause fever, and checking for fever at airports didn't start with Ebola. In 2003, some Asian airports used thermometers as part of their screening of passengers for symptoms of severe acute respiratory syndrome, or SARS. And in 2009, with prompting from the World Health Organization, airports checked the temperature of some travelers, looking for symptoms of H1N1 flu.

As the NPR blog Goats & Soda reported previously, there are pros and cons to different types of temperature-taking devices, from the fairly common ear gun thermometer to the full-body scanner. 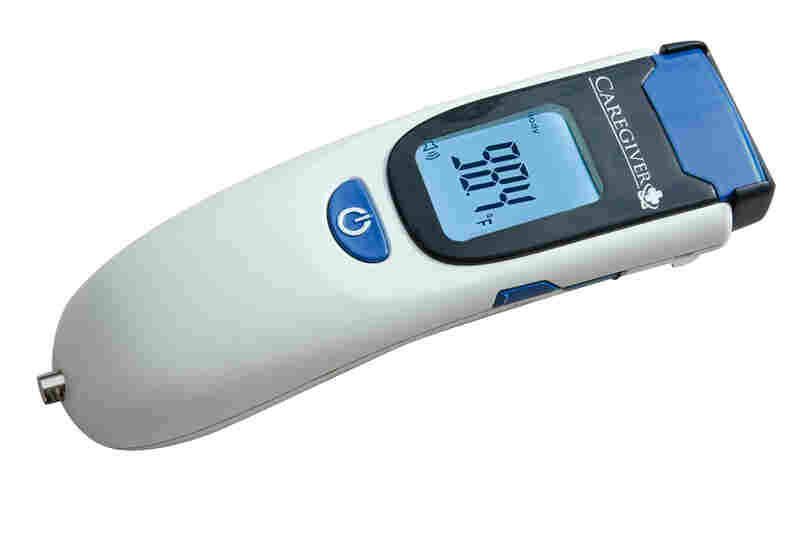 The CDC rush-ordered 80 Caregiver thermometers this week to five airports around the U.S., according to the manufacturer. Thermomedics hide caption 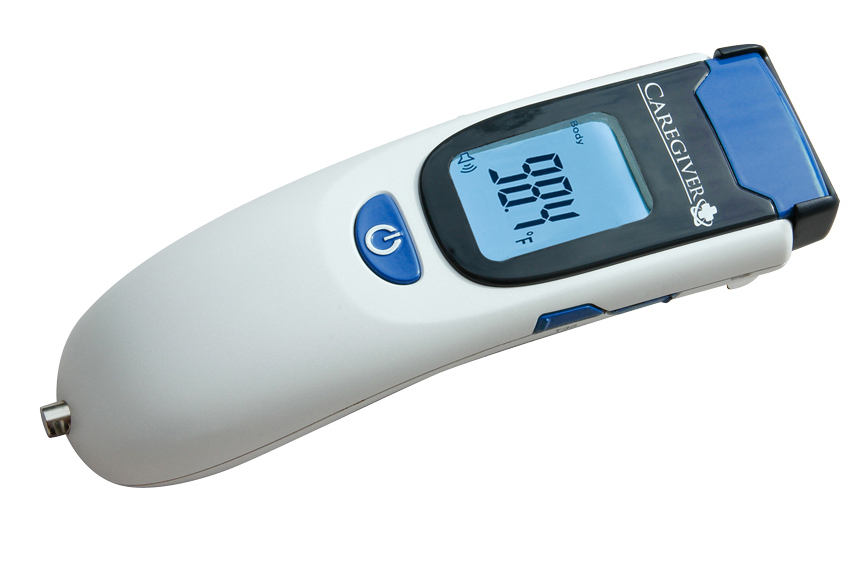 The CDC rush-ordered 80 Caregiver thermometers this week to five airports around the U.S., according to the manufacturer.

The hand-held, no-touch thermometer seems to have emerged as the most popular for Ebola screenings, doctors say, because it's fast, easy to use, noninvasive, pretty accurate, relatively inexpensive, and minimizes the chance of spreading illness.

No-touch thermometers were originally used in industry, from manufacturing to firefighting, and they're a trusted resource, says physiologist Dr. Benjamin Levine at the University of Texas Southwestern Medical Center.

"It's very accurate at measuring whatever it's pointed at," Levine tells Shots. In this case, that's a forehead, which doesn't precisely reflect the human body's internal temperature, but is a close enough match for the rough purposes of screening, Levine says. "It's a quantitative way of having your mother put her hands or lips against your forehead."

The thermometer tells how hot a person is by measuring the infrared energy coming off the body. "Human skin is a very good — or very efficient — emitter of infrared energy," says Gary O'Hara, chief technology officer for Sanomedics, which manufactures CareGiver, the brand of thermometer now being used in some airports.

CareGiver captures that energy coming off the body, and the device is calibrated to translate that energy reading into the temperature of an object. A sensor relies on a silicon lens to focus the infrared energy so the reading isn't "of the wall, or of your hair," says O'Hara, "We want to read the temperature of a precise spot on your forehead." That's part of what differentiates a human no-touch thermometer from an industrial one, he says — the narrow field of view. The other difference is the algorithm the machine uses in its translation.

"That's our special sauce," says Keith Houlihan, CEO of Sanomedics. CareGiver's algorithm is based on data from clinical studies of patients, some with fevers and some without. "We crunch that data and put it into a mathematical algorithm so that it converts the temperature taken from the forehead into this oral equivalent," says O'Hara. The result, he says, is a thermometer that matches an oral thermometer typically within two-tenths of a degree and ASTM International's thermometer standard to within four-tenths of a degree.

No-touch thermometers are useful, in part, because they're unlikely to pass infection from person to person, according to the Centers for Disease Control and Prevention. However, the CDC also notes that this particular type of fever detector is most accurate when measuring the temperature of dry skin, in a draft-free room.

"If someone is sweating or has been in front of a fan and the forehead skin has become cool," he could register at a normal temperature when he is actually running hot, says Levine. And, of course, aspirin and some other pain relievers can reduce body temperature, too, and mask a low fever. No thermometer is perfect.

But for the fast pace of airport screenings, health officials say, if the goal is to pick up symptoms in some people before they even realize they're sick, no-touch thermometers are the best bet.