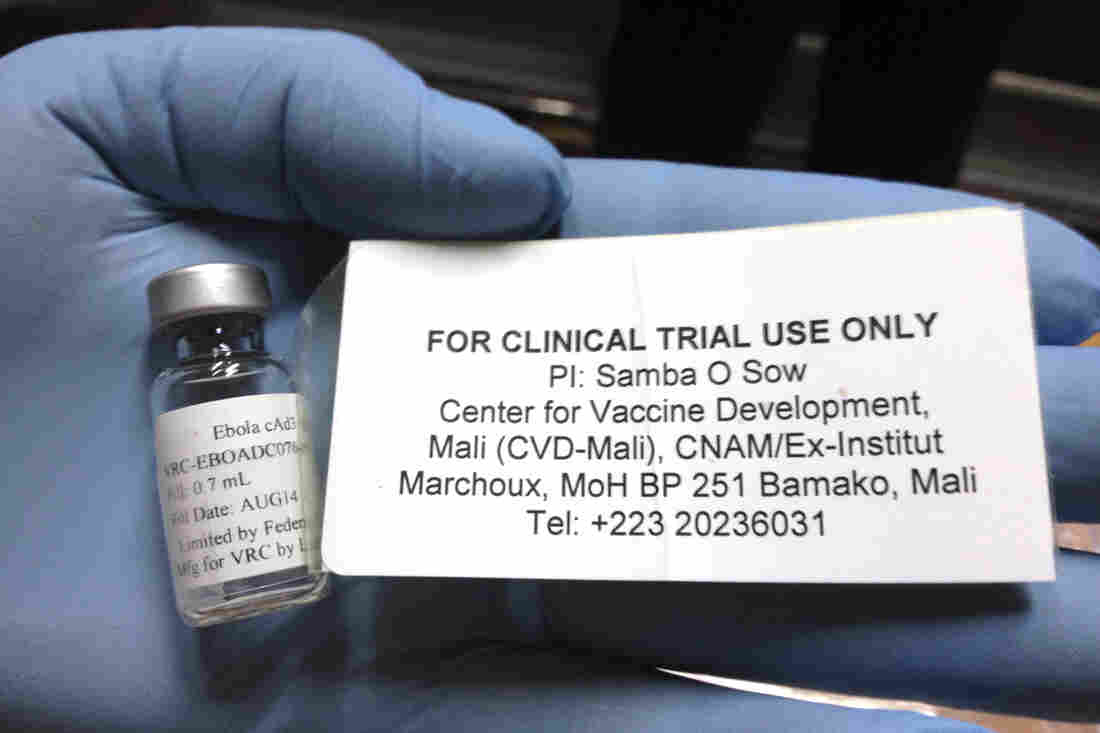 This experimental Ebola vaccine, developed by the U.S. government, is just one of several undergoing small-scale, preliminary testing. University of Maryland School of Medicine/AP hide caption 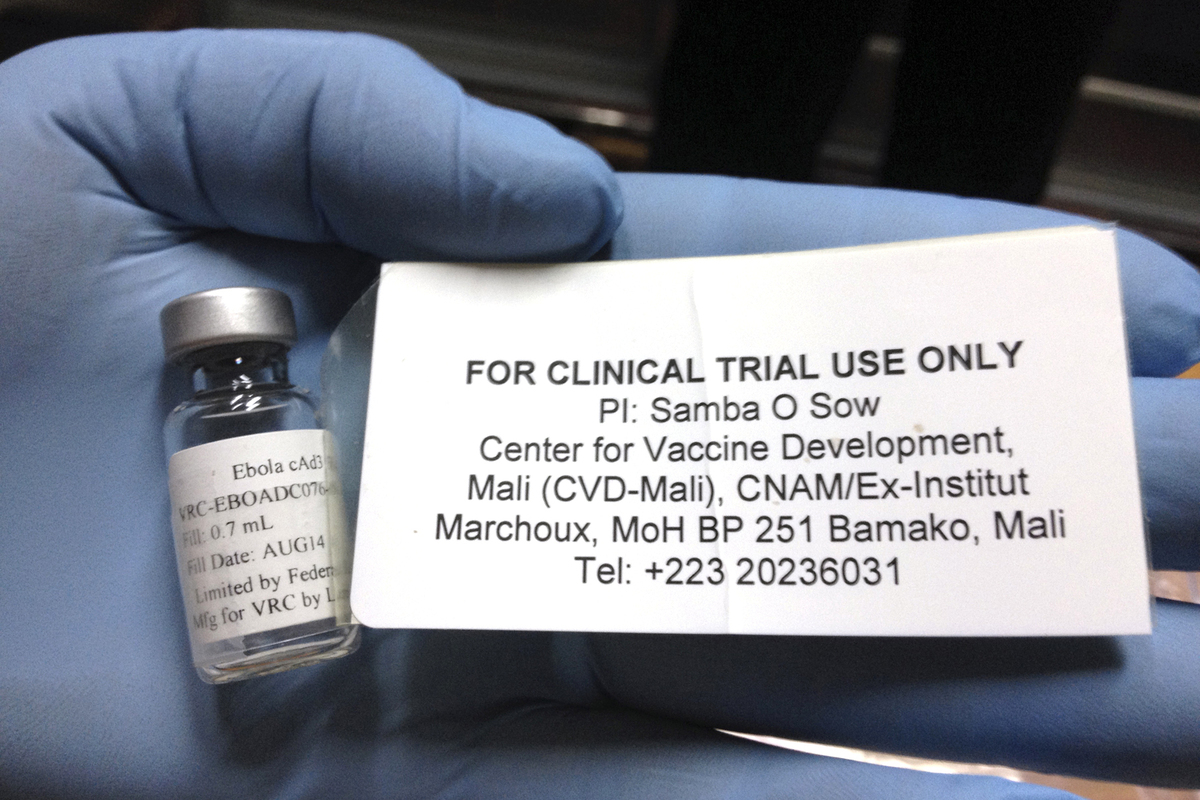 This experimental Ebola vaccine, developed by the U.S. government, is just one of several undergoing small-scale, preliminary testing.

University of Maryland School of Medicine/AP

The World Health Organization says that efforts are on track to distribute an experimental Ebola vaccine in West Africa in January.

Two potential vaccines are now being tested for safety in people, and Russia is developing another one. While quantities will be limited, scientists say even a relatively small supply of vaccine can help bring the epidemic under control.

Some vaccines are also in development in Russia. So we are in contact with Russians to see when they could be available for testing in Africa.

There's no guarantee that any vaccine will be effective, so it's good that several are in the pipeline. That includes an Ebola vaccine being developed by GlaxoSmithKline, which has already been tested in a small number of volunteers in the U.S., Europe and Africa.

Marie-Paule Kieny, assistant director-general for health systems and innovation at the World Health Organization, says a Canadian vaccine licensed to NewLink Genetics in Ames, Iowa, is now being tested in people as well, at the Walter Reed National Military Medical Center and the National Institutes of Health, near Washington, D.C.

Next month, those trials will be expanded to include several hundred volunteers in Europe. Those tests will involve 250 doses of each of these two front-running vaccine candidates, "and these data are absolutely crucial to allow decision-making on what dose level should go into the testing in Africa," Kieny says.

That's a critical question at the moment, because nobody now knows whether a tiny dose or a large dose would be required to protect someone from the Ebola virus. The largest dose in these tests will be nearly 1,000 times larger than the smallest dose.

"Everybody would like to have the lowest dose because, of course, you could have so much more vaccine than if it's the highest dose," Kieny says.

Health officials are hoping to have tens of thousands of doses available starting in January. But that could present a major manufacturing challenge, especially if each shot needed to contain a huge dose of the vaccine.

And while these two potential vaccines are the farthest along, they aren't alone. Three others are in earlier development stages at U.S. companies, and "some vaccines are also in development in Russia," Kieny told a WHO news conference in Geneva on Tuesday. "So we are in contact with Russians to see when they could be available for testing in Africa, and what type of doses, in terms of quantity, could be available in the months to come."

She says it's not clear whether the Russian scientists have already started safety testing in people.

Until quite recently, public health officials figured that a vaccine would come along too late to be of any use in controlling the current Ebola outbreak. But that attitude is changing.

"We could use a strategy similar to the ring vaccination strategy that was used in the smallpox eradication program," says Stephen Morse, an epidemiologist at Columbia University's Mailman School of Public Health. 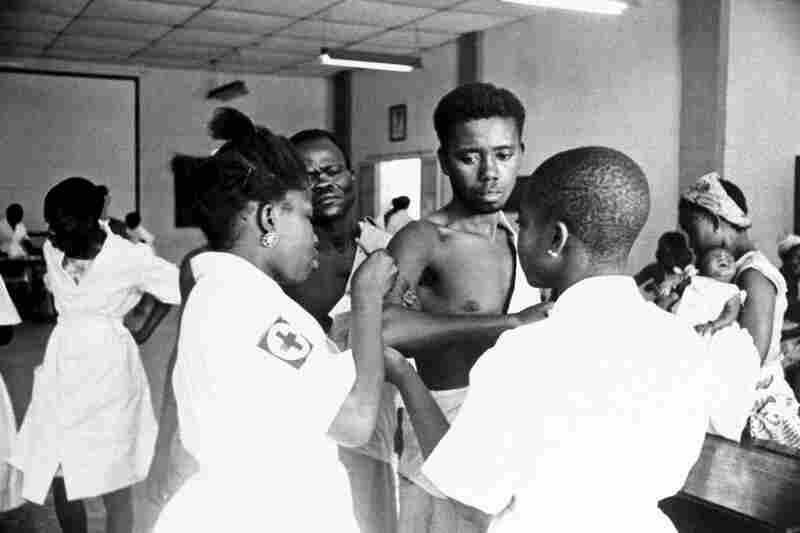 Patients in a clinic line up to get a smallpox shot on Feb. 24, 1962, in Leopoldville, Congo. Health workers used vaccination campaigns to finally eradicate smallpox by 1980. AP hide caption 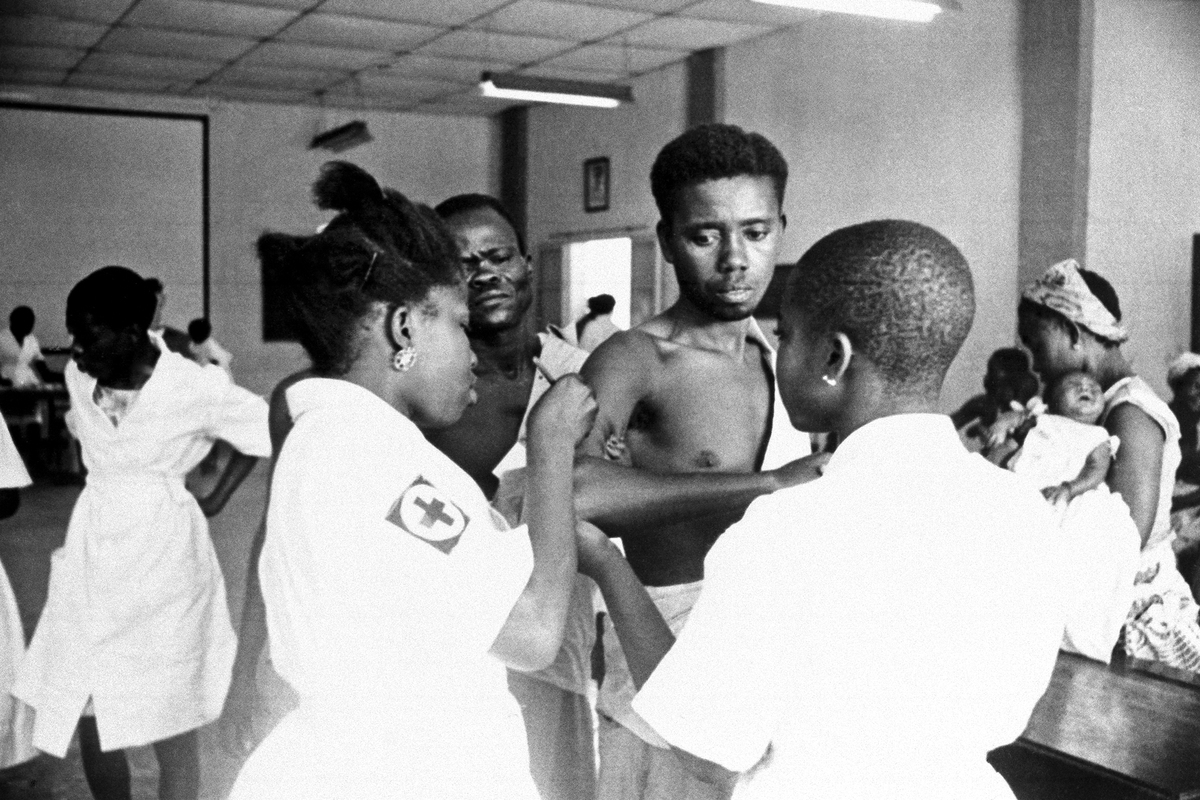 Patients in a clinic line up to get a smallpox shot on Feb. 24, 1962, in Leopoldville, Congo. Health workers used vaccination campaigns to finally eradicate smallpox by 1980.

The concept of ring vaccination is that you wouldn't need to immunize the many millions of residents in the affected West African countries. Instead, if health officials can see where the disease is heading next, they can focus on immunizing people who will soon be in harm's way.

That of course includes health care workers, who are at highest risk right now.

"That would not require large amounts of vaccine," Morse says, "but it probably would limit the spread of the epidemic considerably."

Using this strategy, the vaccine wouldn't have to be perfectly effective, and you wouldn't even need to vaccinate all people who are at risk in order to put brakes on the epidemic.

Drugs to treat Ebola would help as well.

Kieny says the French government plans to test a Japanese antiviral drug called Favipiravir in Guinea. And there's an international partnership coordinated by England's Oxford University to bring a half-dozen other potential drugs into the region as well.

She says the partnership is now visiting sites in the three African countries to identify which treatment centers would be adequate and would also be willing to participate in the testing of drugs.

Of course, public health officials responsible for stopping Ebola are still relying most heavily on the tried-and-true method: finding people who are sick and isolating them so the disease stops spreading.