Accessibility links
In The Hospital, A Bad Translation Can Destroy A Life : Shots - Health News When patient and doctor don't speak the same language, it's not enough to have an ad hoc interpreter. You need an adult fluent in both languages — who can also cut through medical jargon. 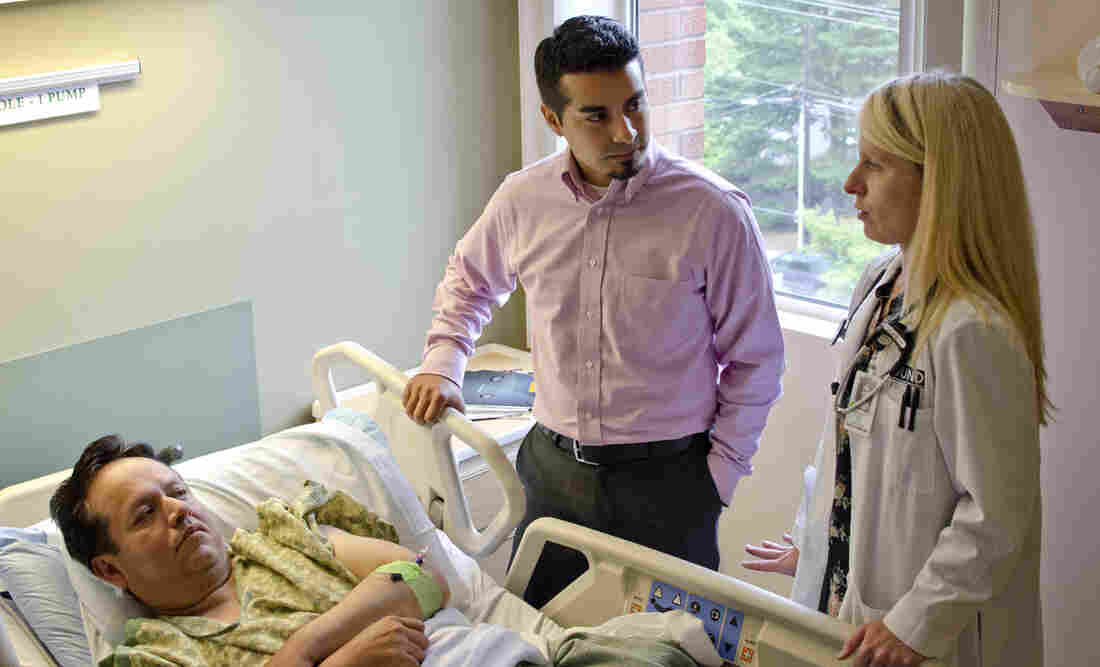 Dr. Angela Alday talks with Isidro Hernandes, via a Spanish-speaking interpreter, Armando Jimenez. Both patient and doctor say they much prefer an in-person interpreter to one on the phone. Jeff Schilling/Courtesy of Tuality Healthcare hide caption

Translating from one language to another is a tricky business, and when it comes to interpreting between a doctor and patient, the stakes are even higher.

In 1980, Ramirez was taken to a South Florida hospital in a coma, says Helen Eby, a certified medical interpreter in Oregon. "His family apparently used the word 'intoxicado' to talk about this person," she says. "Well, 'intoxicado' in Spanish just means that you ingested something. It could be food; it could be a drug; it could be anything that has made you sick."

The family thought something Ramirez had eaten might have caused his symptoms. But the interpreter translated their Spanish as "intoxicated."

One problem that I run into with the translator phone is a lot of our elderly patients seem to be kind of confused by it. You know, some of them don't hear very well.

"So the doctor immediately made a diagnosis of drug overdose," Eby says. A couple of days later, the health team figured out that Ramirez's problem was actually bleeding in his brain. But by then he'd suffered lasting damage. "The guy ended up quadriplegic," Eby says.

In medical situations, doctors and hospitals often turn to family members for help with interpreting, but that can be problematic, she says.

"You know, you've got a 10-year-old in a gynecology appointment," she says. "Is this where you would normally take a 10-year-old? Not likely. Or [you'll] have a child — an adult child even — interpret a parent's cancer diagnosis. That's got to be highly traumatic." And the chance that important medical details will be misunderstood increases significantly.

Thirteen years ago, the state of Oregon recognized the problem and required doctors and hospitals to start using professional interpreters. The Affordable Care Act also has expanded the kinds of materials that hospitals and insurers are required to translate for people who don't speak English.

But more than a decade after its state law passed, Oregon still has trouble getting all patients the medical interpretation help they need.

For example, many hospitals and doctors turned to a phone service, where they can quickly get help in several languages. But the people who work for those language services often aren't certified medical interpreters — so aren't necessarily conversant in medical terminology — and are working at a distance, which can lead to other problems.

Using The Wisdom Of Crowds To Translate Language

Dr. Angela Alday, an internist at Tuality Healthcare, a community hospital in Hillsboro, Ore., says that up to 20 percent of her patients require an interpreter.

"One problem that I run into with the translator phone is a lot of our elderly patients seem to be kind of confused by it," Alday says. "You know, some of them don't hear very well, so that can be a problem with the phone translator. And then, particularly if the patient has dementia, sometimes using the telephone translator is confusing. They don't know what's going on."

Isidro Hernandes, a 48-year-old landscaper in Oregon's fertile Willamette Valley, says (via medical interpreter Armando Jimenez) that he, too, prefers an in-person interpreter to one on the phone. Hernandes, who speaks primarily Spanish, landed in Tuality hospital for treatment of heart problems after feeling tightness in his chest at work.

"A lot of times the over-the-phone interpreter can't see what you're doing, can't describe or relay that message," Hernandes says via Jimenez. "And sometimes they might have errors or mistakes in communications."

Gerry Ewing, the director of corporate communications at Tuality, says the hospital has largely been relying on qualified phone interpreters, but it plans to use more in-person interpreters.

"We're trying to reflect the demographics of our community, which is changing rapidly," Ewing says. "Washington County is around 25 percent Hispanic, so we need to reflect that in the services we provide our patients."

Alday says she's pleased that the hospital is planning to use more in-person interpreters. In the meantime, she says, she often relies on phone interpreters, but also sometimes will turn to a family member for particularly touchy issues. "I feel like if there's a family member standing there beside them, then they understand more what's happening," she says.

Oregon has about 3,500 medical interpreters. But Eby says only about 100 of those have the right qualifications. "So, you have a 3 percent chance of getting a qualified or certified interpreter in Oregon right now," she says. "That's pretty low, in my opinion."

She says it takes a long time and costs a lot of money to become certified. And after going through all that training, a person may find that he or she can make more money and have a more stable lifestyle in another career — like being a translator for court reporting. That's because medical interpreters tend to be consultants and don't get paid to travel. The hours can also be sparse and sporadic.

But Eby remains hopeful. Now that the Affordable Care Act is penalizing hospitals for readmissions, reducing medical errors should be more of a priority than ever, she says — it's better for patients and it can save hospitals money.

A study by the American College of Emergency Physicians in 2012 analyzed interpreter errors that had clinical consequences, and found that the error rate was significantly lower for professional interpreters than for ad hoc interpreters — 12 percent as opposed to 22 percent. And for professionals with more than 100 hours of training, errors dropped to 2 percent.

To help ease the shortage of interpreters in Oregon, the state's Office of Equity and Inclusion reports that it is trying to increase training and add 150 new interpreters over the next couple of years.