Accessibility links
Seeing Red During Breast Cancer Awareness Month : Shots - Health News Decades of effort to raise awareness of breast cancer hasn't helped to reduce the death toll once it spreads. One woman living with metastatic breast cancer says it's way past time for a change. 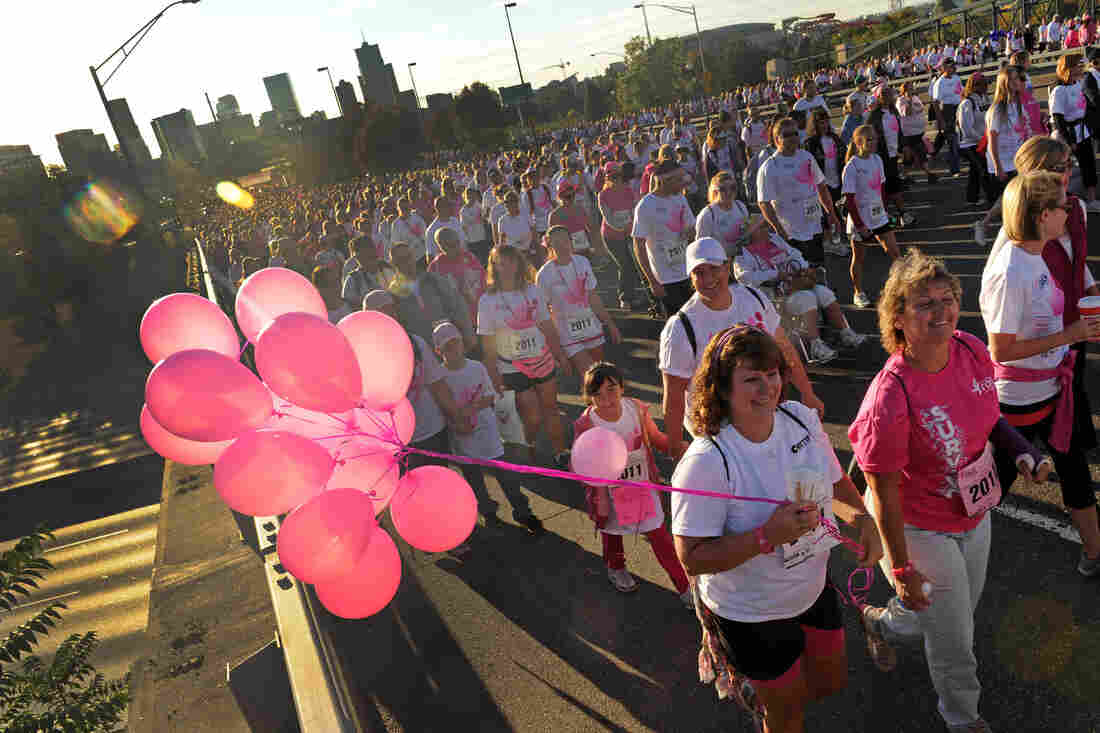 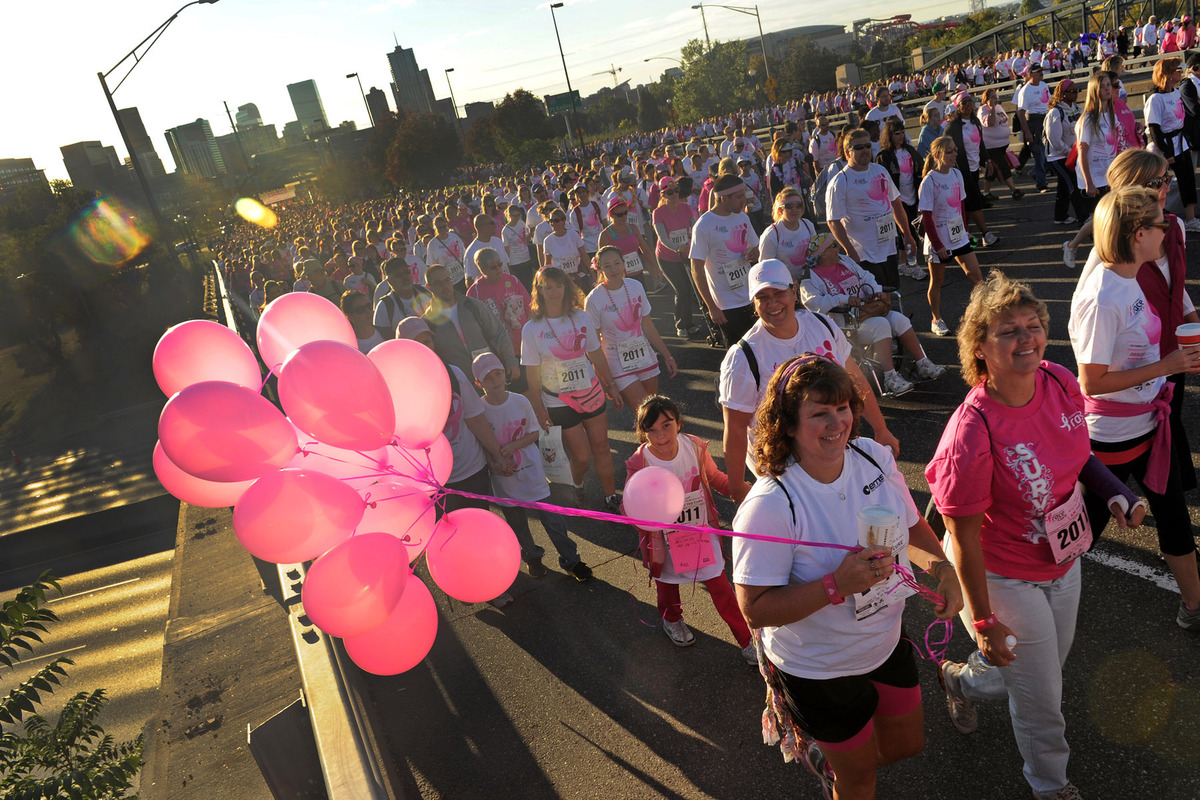 Women participate in a breast cancer fund-raising in Denver in 2011. Despite decades of awareness campaigns, the survival rate for women with metastatic breast cancer hasn't improved.

To many young women, a small lump like that wouldn't be cause for alarm because most breast lumps are benign. But there's a long history of breast cancer in my family, so I immediately consulted a renowned breast surgeon. "It's nothing to worry about," she said. My mammogram was completely normal. She thought the lump was merely normal breast tissue.

But four years later I was diagnosed with early stage breast cancer.

No doctor ever mentioned symptoms to watch out for such as bone pain or a chronic cough — tip-offs that the cancer might have returned.

My treatment was among the most aggressive available: surgery (a double mastectomy), chemotherapy and five years of hormonal therapy to keep my hormone-sensitive breast cancer quiescent.

Since there was no further sign of my cancer after my surgery, I hoped that my hard-hitting trio of treatment had succeeded in blasting every last cancer cell. And whenever I made my annual visit to my oncologist, I was comforted by his reassuring words: "There's no sign of your disease."

In 2007, I developed a chronic dry cough which my oncologist dismissed, and which other physicians believed was caused either by a kind of chronic heartburn called GERD, postnasal drip, or asthma.

Unbeknownst to me then, up to 30 percent of those diagnosed with early stage breast cancer will eventually develop metastatic breast cancer, which carries a 98 percent mortality rate.

Four years later I lost my voice, and an observant doctor noticed that my vocal cord was paralyzed. After further testing, a thoracic surgeon discovered with a biopsy that I had extensive metastatic breast cancer in my lungs, a full 18 years after my early stage breast cancer diagnosis.

Between my initial breast cancer occurrence and my subsequent relapse, my breast cancer had been misdiagnosed for a total of eight years.

Unbeknownst to me then, up to 30 percent of those diagnosed with early stage breast cancer will eventually develop metastatic breast cancer, which carries a 98 percent mortality rate.

No doctor ever mentioned symptoms to watch out for such as bone pain or a chronic cough — tip-offs that my cancer might have returned.

When I consulted my longtime oncologist for treatment, he burst into tears. I stayed calm and reviewed my options with him. He recommended a chemotherapy clinical trial, but I felt uneasy about it. I got a second opinion that led to hormonal therapy, which I've gratefully been on ever since.

While I've tried to be patient and thankful, I sometimes feel outraged about how little has changed since my first diagnosis. Despite decades of awareness months, survival has remained depressingly flat.

There's no doubt that so far I'm one of the lucky ones: no chemo, pain-free and able to do everything I did prior to my recurrence. I also realize that eventually it's likely that my luck will run out.

While I've tried to be patient and thankful, I sometimes feel outraged about how little has changed since my first diagnosis. Despite decades of awareness months, survival has remained depressingly flat. The fact is, each year over 40,000 women and 400 men die of metastatic breast cancer, and the median survival is only two to three years.

In my view, the public has often been misled by pink ribbon messages that exaggerate prevention and cures for breast cancer.

With all the money flowing to breast cancer research, which is admittedly one of the better-funded cancers, I would have hoped for more dramatic reductions in the number of people diagnosed with and dying from the disease.

Another point that makes me see red, especially in October, is that the results of so many large clinical trials never get published in scientific journals. I and many others with metastatic breast cancer would support a requirement that all breast cancer trials be published.

Finally, I'm saddened by the limitations and toxicity of drugs for people like me. I'd like to see better use of the Food and Drug Administration's programs for speeding up drug approvals, as well as expanded access to experimental drugs for compassionate use.

Yet I believe there is hope for change. Just this month, the newly formed Metastatic Breast Cancer Alliance, a consortium of 29 organizations dedicated to improving the lives of those with MBC, published a detailed analysis laying out the needs of those living with the disease. The group will next look for ways to fill those gaps, a momentous task that I believe they're in the right position to fulfill.

I hope to live long enough to witness a drop in breast cancer mortality. For that to happen, fundamental shifts are required in how we assess, address and ultimately prevent metastatic breast cancer so that fewer people will follow me on my unwanted journey.

Anne Loeser is a retired software development project manager who resides in Salt Lake City with her husband and parrot.