Accessibility links
Transgender Men Who Become Pregnant Face Social, Health Challenges : Shots - Health News Getting prenatal care can be a struggle, transgender men report in what may be the first study of its kind. And their feelings on once again appearing more female varied greatly. 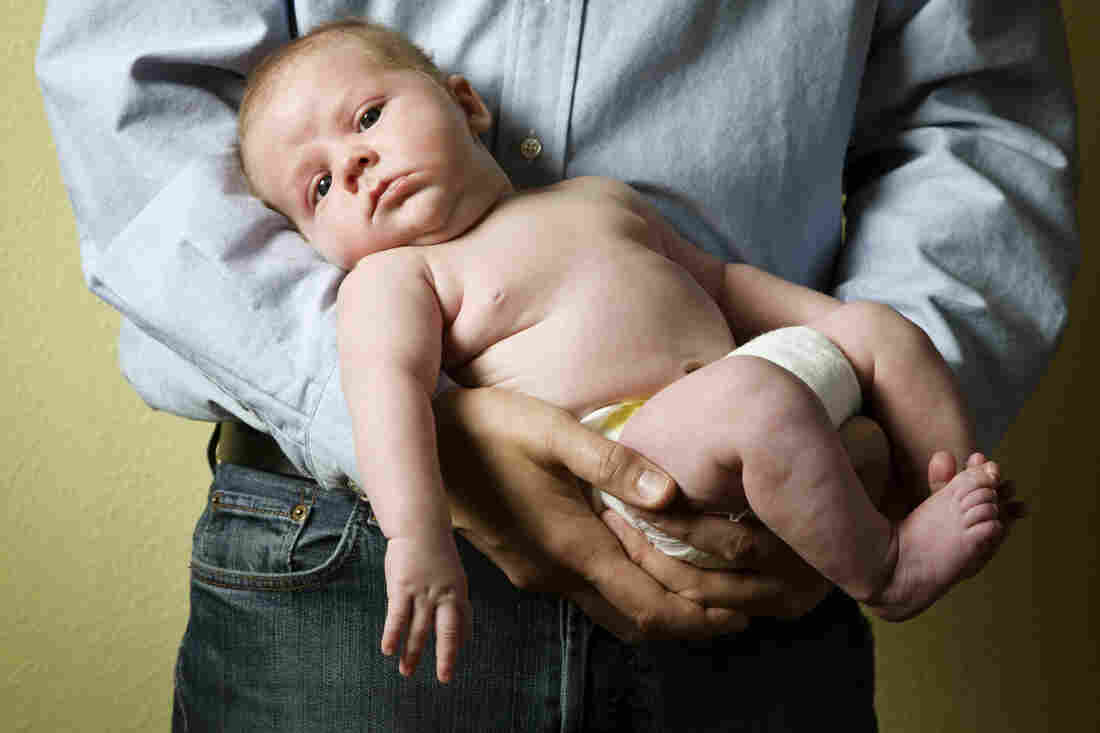 When Dad is the one who gets pregnant, the whole process of pregnancy and childbirth gets a lot more complicated. Inti St. Clair/Ocean/Corbis hide caption 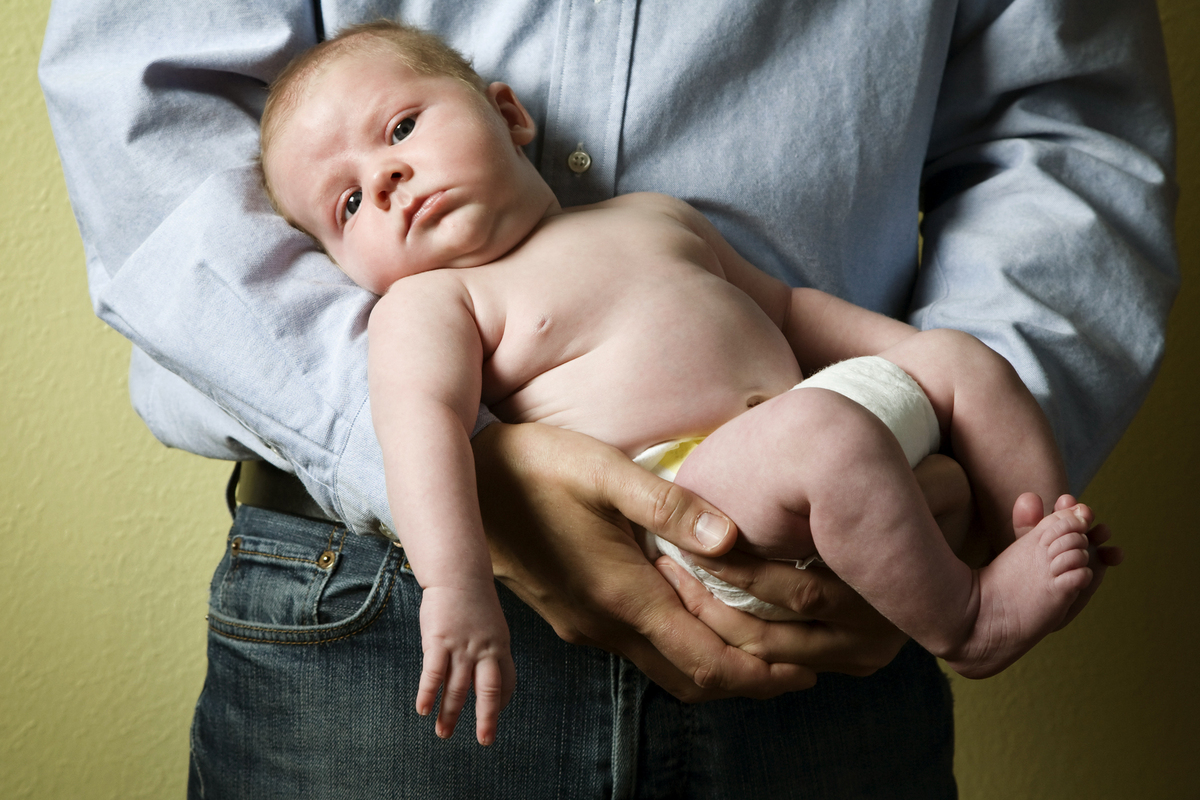 When Dad is the one who gets pregnant, the whole process of pregnancy and childbirth gets a lot more complicated.

"Pregnancy and childbirth were very male experiences for me," said a 29-year-old respondent in a study reported Friday in Obstetrics and Gynecology. "When I birthed my children, I was born into fatherhood."

If this statement at first seems perplexing, it's less so when you realize the person talking is a transgender man – someone who has transitioned from a female identity to a male or masculine identity.

He is one of 41 participants in a study of how it feels to be male and pregnant, a study the authors think may be the first of its kind.

Pregnancy as a transgender man is unlike any other kind. No one expects a man to be pregnant, and the study participants said they were often greeted with double-takes, suspicion and even hostility from strangers and health care providers. "Child Protective Services was alerted to the fact that a 'tranny' had a baby," one participant reported.

There were plenty of insensitive comments and harsh experiences that troubled these men, both in and out of the health care setting, ranging from inappropriate use of pronouns (about three-quarters of the respondents preferred to be called "he," while a handful preferred "she," "they," "ey," or in one case, no pronoun at all), to actually turning them away and denying them prenatal care.

"They just feel a lot of isolation from the health care community," said Dr. Jennifer Kerns, an assistant professor of obstetrics, gynecology and reproductive sciences at the University of California, San Francisco and the senior author. "And we have some indication from our qualitative results that depression might be exacerbated for folks who are transgender, both during pregnancy and after."

The study came about because a medical student working with Kerns, Alexis Light, found herself fielding questions from transgender male friends about whether they'd be able to conceive and what pregnancy would be like.

Light, now a first-year resident in obstetrics and gynecology at Washington Hospital Center in D.C., didn't know the answer and couldn't find it in the medical literature. So she asked Kerns to help her design a research project to find out. Kerns recognized it as a cutting-edge subject, with a recent opinion paper from the American College of Obstetricians and Gynecologists highlighting the need for high-quality health care for transgender individuals.

With such a small survey, it's impossible draw any firm conclusions; Kerns and Light both emphasize that more research is needed. But one thing they did learn was that prior testosterone use didn't seem to affect pregnancy outcome. Some transgender men use testosterone to look and sound more masculine.

Twenty-five of the survey participants had taken testosterone before becoming pregnant; 16 had not. But the researchers found no difference in pregnancy, delivery, or birth outcomes between the two groups.

"My friends were asking me be if they should delay starting testosterone if they had an interest in maintaining future fertility," Light said. Based on the experience of these 25 transgender men, she can tell them there's no need to delay — though they will need to discontinue testosterone when they decide to conceive, and stay off it throughout the pregnancy.

One complication unique to transgender male pregnancy is the re-emergence of gender dysphoria, the feeling that one's psychological gender identity is different from one's biological sex. "Heavy time, having a baby, not passing as male," wrote a 35-year-old respondent, "all the changes and a society telling me to just be happy."

The author of the new graphic memoir Pregnant Butch, a masculine-looking woman named by A.K. Summers, said one of the worst parts of her pregnancy was that it exaggerated the most female aspects of her body, enlarging her breasts and filling out her hips. "All of the things that I thought that made me feel attractive were lacking in the pregnancy," Summers said recently on the public radio podcast "The Longest Shortest Time." She was most comfortable, she said, during the period early in pregnancy when she could just "pass as a fat man."

But changes in gender dysphoria can work both ways, the investigators found. In some of the transgender men in the study, gender dysphoria actually declined with pregnancy. These people said they were, for the first time in their lives, pleased with their bodies, which were finally helping them do something they valued that a typical male body could not do. As one respondent put it, "it was relieving to feel comfortable in the body I'd been born with."

More work is needed to find out how many transgender men get pregnant every year — it could easily be in the thousands, Kerns guessed — and to see how many more might be trying to get pregnant and failing. The men in this small study had little trouble conceiving — one-third hadn't even planned their pregnancies, and just 7 percent said they took fertility drugs — and the majority were able to get pregnant using their own eggs and their partner's sperm. But it's impossible to draw any inferences from that, since the only people recruited for the study were transgender men who had successfully had at least one child.

One thing the study highlights is that, as Light put it, "gender identity is a spectrum." And that building rapport with patients anywhere along that spectrum begins with the simplest step: with the physician finding out which pronoun the patient prefers, and using it.