Accessibility links
Broken Hips: Preventing A Fall Can Save Your Life : Shots - Health News Twenty percent of people who fall and break a hip after age 50 die within a year, and women are at greatest risk. But you can reduce the odds of falling. Here's how. 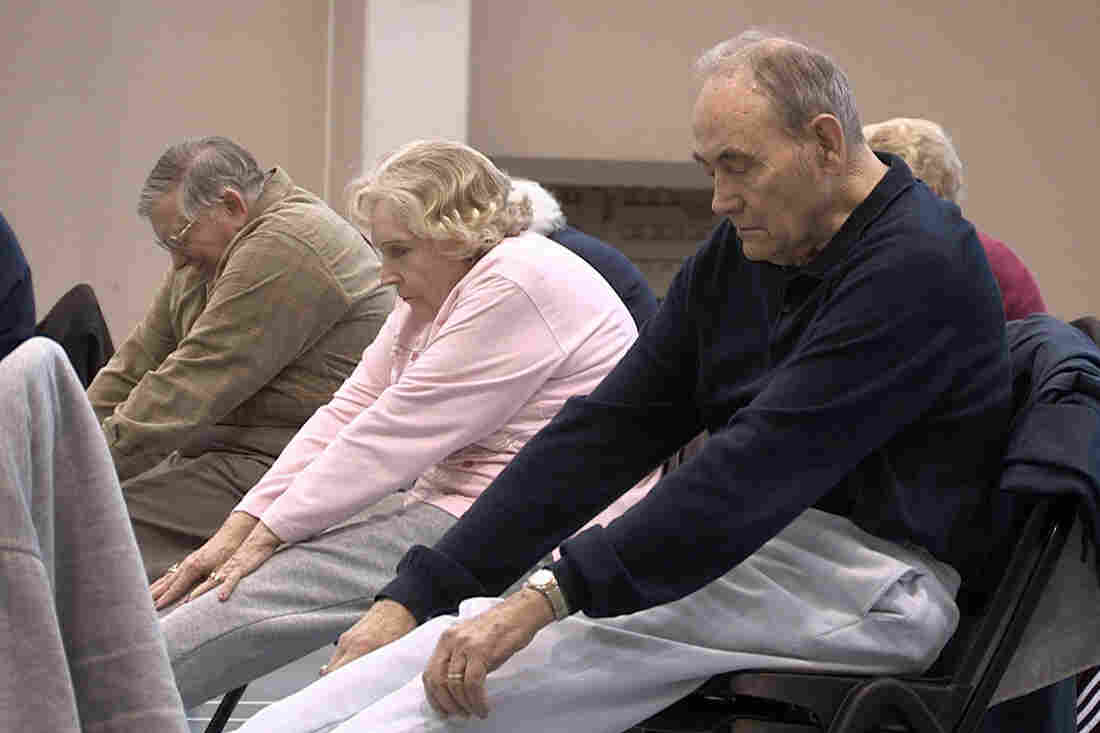 Joyce Powell, 80, attends an exercise class at UT-Arlington with her husband, Thomas (right). Powell says she feels more confident in getting around and traveling since taking the classes. Dane Walters/KERA hide caption 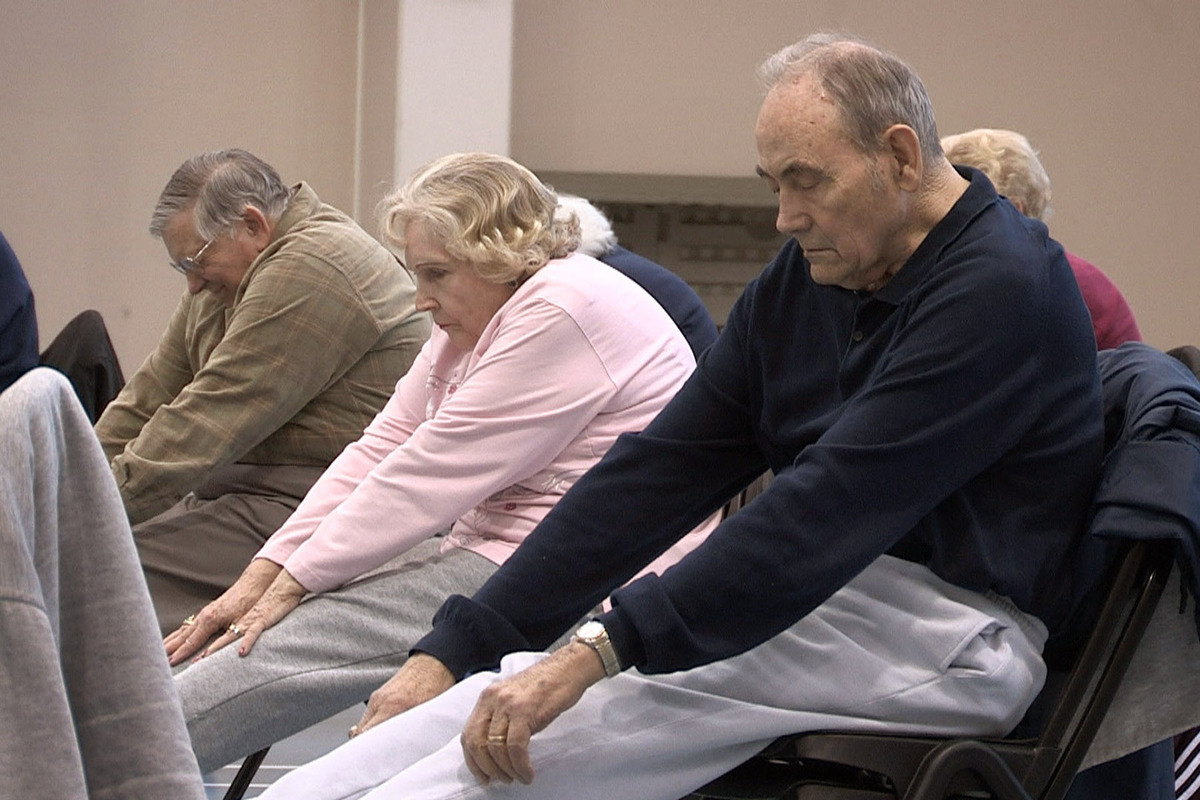 Joyce Powell, 80, attends an exercise class at UT-Arlington with her husband, Thomas (right). Powell says she feels more confident in getting around and traveling since taking the classes.

Last October, Jeanette Mariani was an independent 87-year-old, living alone in Dallas and getting around with a walker. Then one night she switched off the light and tried to make her way into bed. A chair was in the way. And she fell.

"There I was, lying on the floor," she recalled. "I pulled down one of my pillows. I didn't reach very high, just pulled it down, put my head down on it and thought: 'Well, I'll wait until morning.' "

The next day, she called for help. 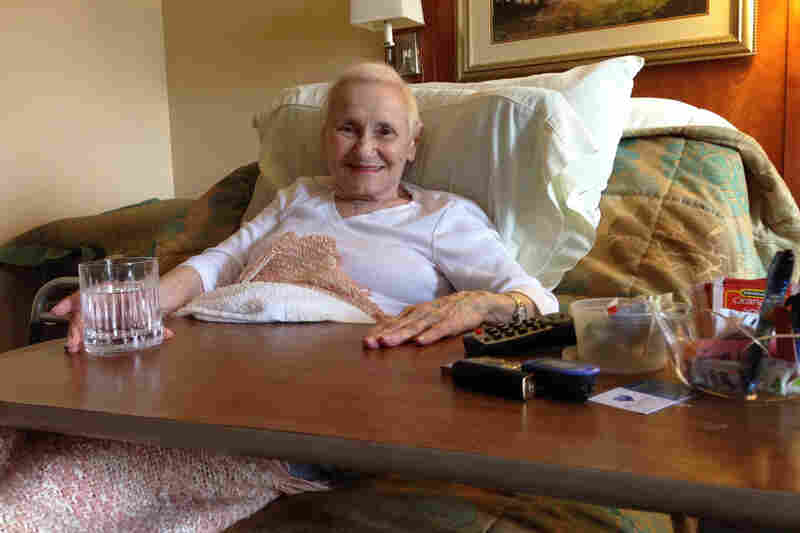 Jeanette Mariani landed in a Dallas rehabilitation facility after she fell and broke her hip last October. She died a month after leaving the hospital. Lauren Silverman/KERA hide caption 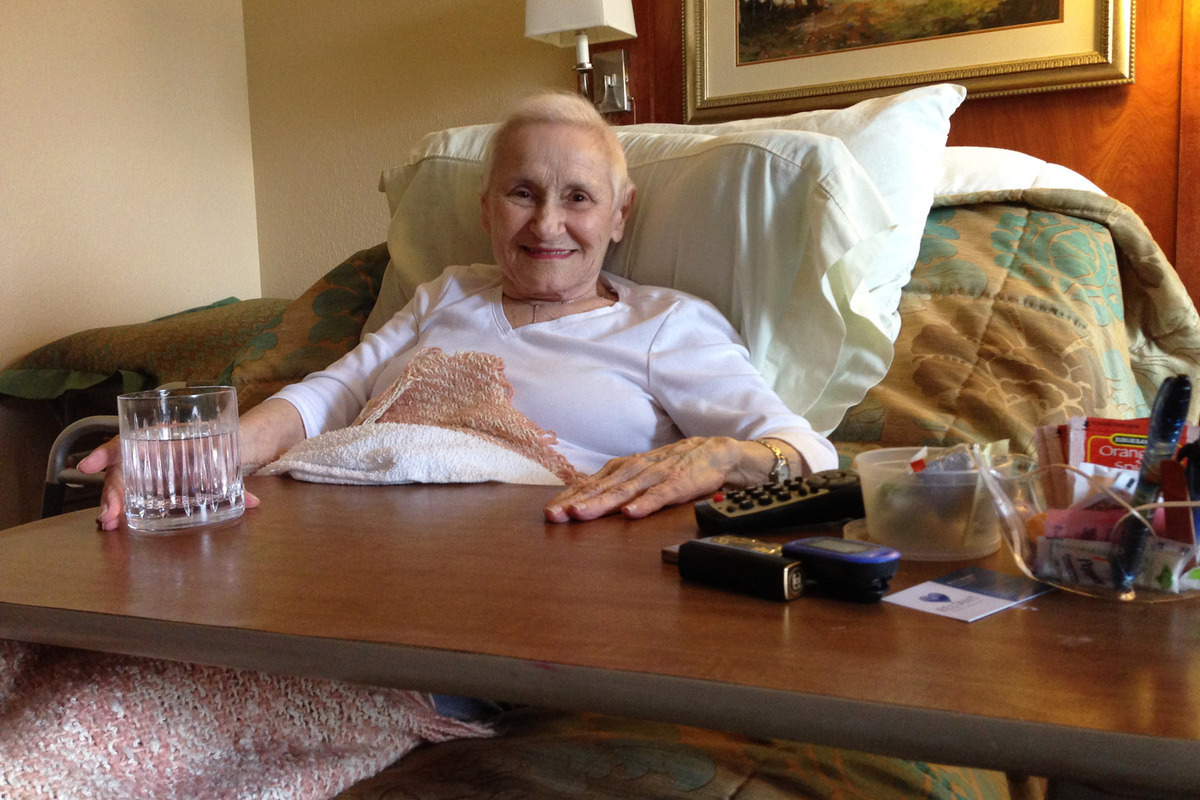 Jeanette Mariani landed in a Dallas rehabilitation facility after she fell and broke her hip last October. She died a month after leaving the hospital.

A fall from a chair or a bed may not seem like a death sentence — but for an older person it can be. Falls are the leading cause of death from an injury for older Americans. For women, it's especially bad: Three quarters of those with hip fractures are women. For many, the broken hip starts a chain reaction — usually because older people also suffer from underlying conditions such as diabetes, arthritis, hypertension or dementia.

Every moment counts after a fall, says Dr. Amy Moss, an assistant professor of geriatrics at the University of North Texas Health Science Center in Fort Worth. When you're bedridden or hospitalized, your odds of developing everything from bed sores to pneumonia increase dramatically.

Studies show that delaying surgery after a fracture for just 24 hours increases the chance of complications and death. "The most common scenario is they die of pneumonia after a hip fracture," Moss says.

After spending the night on the floor, Jeannette Mariani called her daughter Janet, who took her to the hospital.

"After her fall, I knew that she was going to decline," Janet said. "You had that sixth sense, you know."

That sixth sense is backed up by real numbers. Almost 1 out of 10 people over the age of 50 will die within a month of surgery for a broken hip. That rises to 1 in 5 if the patient already has an acute medical problem.

Jeanette worked hard in rehab to become stronger, but underlying health problems caught up with her. Previous lung problems got worse, and her lymphoma returned.

"After she left the hospital, she died within a month," Janet said.

The greatest predictor of a future fall is a previous fall.

More than 90 percent of hip fractures are caused by falls. But falls can be prevented. Common-sense steps like removing rugs, installing better lighting, and getting an updated prescription for your glasses are a good start. So is addressing the physical and psychological side to falls. It might sound silly, but it turns out that people who are afraid of falling are actually more likely to fall.

Nine years ago, Joyce Powell was in hospital, on her way to the bathroom, when she fell and broke her hip. She recovered, but she hasn't gotten over the fear of falling.

"It stays with you," says Powell, who is 80 and lives in Arlington, Texas. "You're aware that you can't function like you once did."

That's why Powell attends a fall-prevention class at the University of Texas, Arlington — not just to get stronger but also to face her demons. Participants are in their 70s, 80s and 90s, and their workouts involve everything from balancing on exercise balls to playing Wii games.

"The greatest predictor of a future fall is a previous fall," says Chris Ray, director of the Center for Healthy Living and Longevity at UT-Arlington.

One of the keys to preventing a fall is improving balance. As we age, Ray says, natural changes make it hard to stay upright: changes in hearing, vision and proprioception — the awareness of where one's body is in space. If seniors can learn to use these senses better, they will be less likely to fall.

Sit More, And You're More Likely To Be Disabled After Age 60

To help them learn, Ray tests them using something that looks like a photo booth at an amusement park. The machine assesses how well someone can use the senses to maintain balance. The walls shift, the screen changes, and the floor tilts.

"In daily life, when we see seniors who fall, it's usually during multitasking," Ray explains. "We pipe in loud noises, city sound or music, pipe in visual distractors on the screen or a test on the screen, as they're trying to maintain their postural control while the walls are moving in concert."

The goal, Ray explains, is to identify the best intervention for each individual. For some, a regimen of tai chi might be enough. For others, it might be weightlifting or even practicing walking with their eyes closed.

For Joyce Powell, the exercise classes have made her more confident in getting around and traveling. Still, she's cautious. "When I walk, I look to see where I am, particularly if I'm on uneven ground," she says.

Freedom from falls is never guaranteed. But dedication to an exercise program can help seniors keep their balance without giving up the activities they love.

"It's one of the things I've learned you just have to do in order to protect yourself to remain upright," Powell says. "I guess I could use a walker to do it, but I don't want to. I want to be free."

In the audio of this story, as in a previous Web version, we refer to proprioception as what you feel in your hands and toes. It's actually the body's sense of where it is in space.