Accessibility links
Health Law's Big Tent Still Leaves Some People Out : Shots - Health News About 10 million more people in the U.S. now have health insurance than did this time last year. But some immigrants, low-income adults and others are still falling through the gaps. 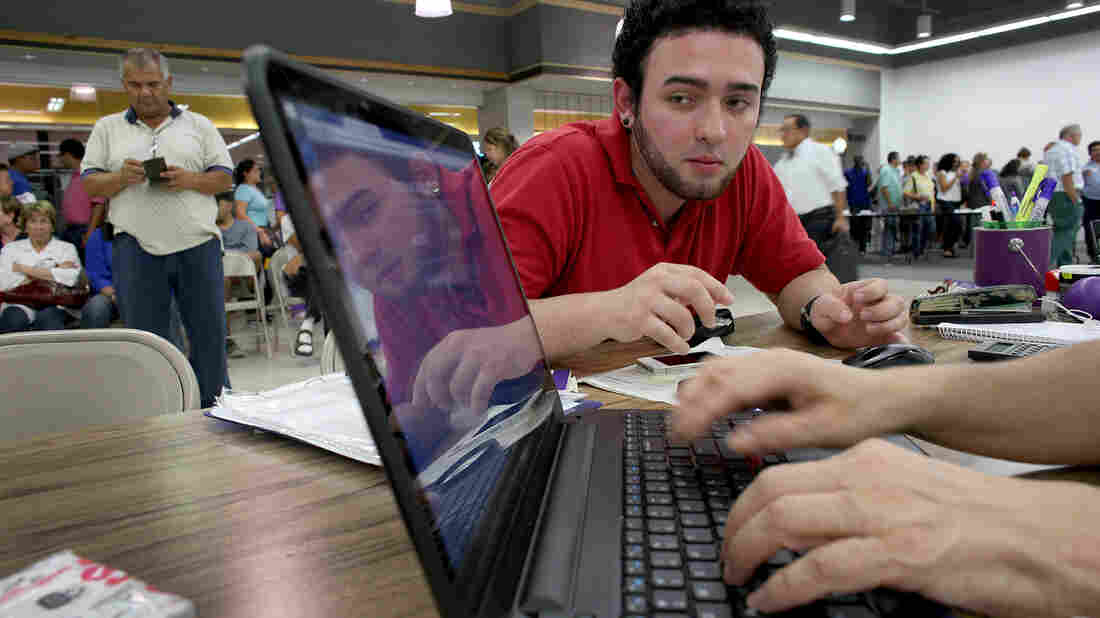 Andres Cuartas got help from an agent last March when he signed up for health insurance at a Miami mall. In the last year, the percentage of women who are uninsured has dropped more than the percentage of uninsured men. Joe Raedle/Getty Images hide caption 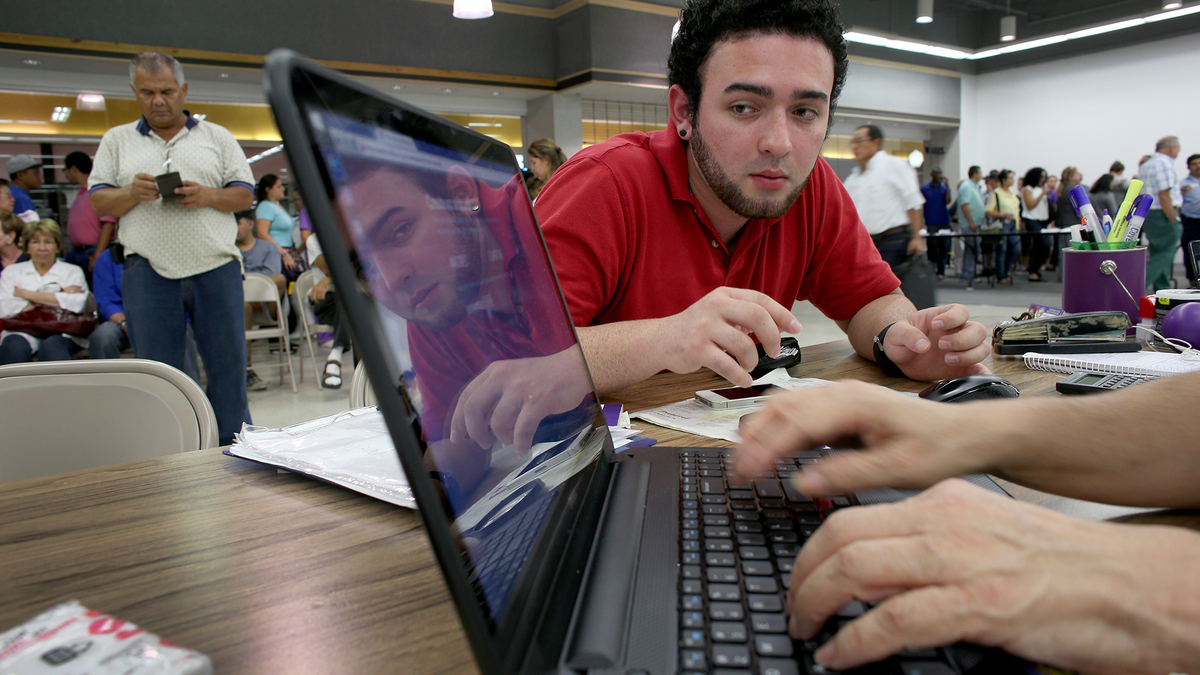 A Shots post earlier this week by NPR's John Ydstie detailed the "family glitch" in the Affordable Care Act. That's where people who can't afford their insurance at work aren't eligible for help in the new insurance exchanges. Many of these Americans, most of whom make middling incomes, will remain uninsured.

That story got us wondering: Who else is getting left out by health law? And who is getting coverage?

Obamacare 'Glitch' Puts Subsidies Out Of Reach For Many Families

Official government statistics won't be out until next year, but several other surveys, including one out just this week from the Urban Institute, all agree that between September 2013 and September 2014, the percentage of adults who are uninsured dropped by about by about a third. That translates into about 10 million more people getting health insurance during the year.

That number is considerably larger than the just under 7 million or so people reported to have bought coverage at a health exchange. The difference arises because some customers buying from an exchange were people who previously bought their own insurance. They weren't uninsured, but their plans might have been newly canceled, or they shopped in the exchanges to get a subsidy. There were also several million who got coverage through the Medicaid program in states that opted to expand it. And some people picked up job-based coverage as the economy continued to improve.

A series of surveys looking at who got coverage found that the biggest gains have come among groups that had the lowest rates of insurance. These groups include young adults, who are just starting out in the job market, people of color, people in states that expanded their Medicaid programs, people with lower incomes, and people in rural areas.

Another interesting trend is that the uninsured rate fell more for women than for men. That's a little unexpected because the Medicaid expansion allows low-income men who aren't parents to qualify for the first time. Women who are pregnant or mothers of young children have long been eligible, so there was a bigger pool of uninsured men who could gain coverage.

Who does this leave out?

Several diverse groups. The biggest is probably undocumented immigrants. They are not eligible, by law, to purchase coverage in the health exchanges and, in most cases, they're not eligible for Medicaid. It's also worth mentioning that President Obama's executive order from last month didn't make any new immigrants eligible for health benefits under the Affordable Care Act.

The next big group is adults with low incomes who aren't disabled and aren't parents and who live in the 23 states that haven't expanded the Medicaid program. The law was written to extend Medicaid to all low-income people, so you're not eligible to buy coverage on the exchanges if your income is under the federal poverty line, which is about $11,700 for an individual this year.

In 2012 the Supreme Court ruled that the Medicaid expansion was optional; a little under half the states have opted to decline the federal government's offer to pay nearly all the cost of that expansion. Those states — including Texas, Florida, and Georgia — have, all told, several million residents in the Medicaid gap.

Then there are the people who fall into the so-called family glitch. They can theoretically afford their own, individual coverage, but find that insuring the rest of the family is too expensive. Yet, because of the way the law is written, those family members aren't eligible for subsidies in the exchanges.

And, finally, there are people who don't want coverage (and particularly don't want to be required by the government to buy it), and other people who still don't know that if they don't get health insurance one way or another, they may have to pay a fine next year.

In fact, many of those who remain uncovered won't have to pay any fines. There are lots of exceptions to the rules for who will have to pay tax penalties for not having coverage. People who are undocumented are exempt, as are people who don't earn enough to have to file federal income taxes. Also you're exempt if the least expensive insurance would cost more than 8 percent of your income. And there are other case-by-case exemptions for people who can claim financial hardships.

The bottom line is this: Framers of the health law never expected it to cover everyone. Instead, their aim continues to be to get the insured rate up to around 90 percent.

This story is part of an NPR partnership with Kaiser Health News.