Accessibility links
Doctors Lag In Adopting Cheaper, Faster Radiation For Breast Cancer : Shots - Health News Three weeks of radiation works just as well as six weeks for most women with early stage breast cancer. But doctors have been slow to make that switch. Money may be one big reason why, a study says. 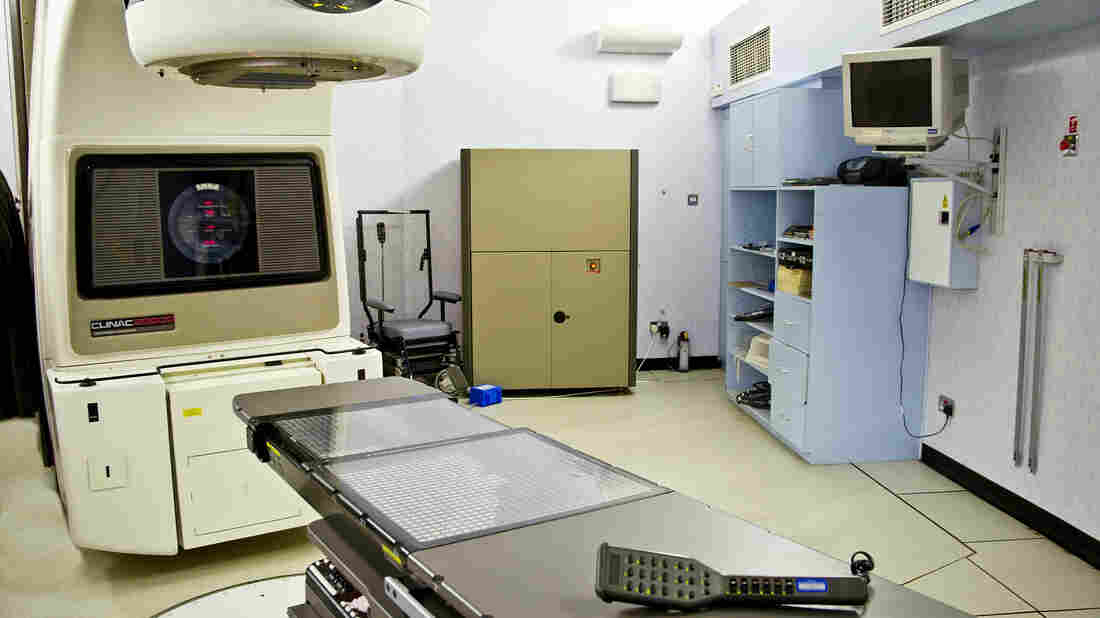 Radiation treatment for breast cancer could take less time and cost less for many women, but doctors aren't putting that knowledge into practice, a study finds.

And one reason is that the doctors in charge of radiation treatment will make less money, according to Dr. Ezekiel Emanuel, a study author and chairman of the Department of Medical Ethics and Health Policy at the University of Pennsylvania.

"For women as patients it's much better to have the shorter course," Emanuel told Shots. "They get done with radiation four weeks early, and for society it's less expensive. The only person it's not good for is the radiation oncologist. I think it's a challenge for them."

I think patients and breast cancer advocates need to take a stand on this. It's better for patients, and docs need to put their patients first.

Radiation is a standard treatment for women with early stage breast cancer who have had a lumpectomy; it's good at killing cancer cells missed by surgery. It typically takes five weeks to seven weeks, five days a week.

But clinical trials of using fewer treatments but higher doses in each visit found it to be just as effective. That typically takes three weeks.

In 2011 the American Society for Radiation Oncology endorsed the shorter course, saying it's "equally effective for in-breast tumor control and comparable in long-term side effects" with the conventional treatment, especially for women over 50 who haven't had chemotherapy or lymph node involvement.

And last year, the society made considering shorter treatment schedules its No. 1 priority as part of the Choosing Wisely campaign to reduce unnecessary medical treatments.

That has worked. Since 2008, the number of women getting the shorter course of radiation (called hypofractionated whole breast irradiation) has risen from about 11 percent to 36 percent in women over 50, the study finds. It was published Wednesday in JAMA, the journal of the American Medical Association. The share of women doing shorter treatments who weren't in that group also rose, from 8 percent to 21 percent.

Not bad, you might think. But other countries have embraced short-course radiation much more rapidly, with 70 to 80 percent of eligible women getting the accelerated treatments.

That may be because those countries have a shortage of radiation facilities. "If they have to use the machine less for particular patients, they can take in more patients in a timely way," he says. "Whereas here we have an oversupply of radiation oncology facilities."

And those facilities need to make money. In the JAMA paper, Emanuel and his colleagues found that insurers paid $4,338 more for radiation treatment for women who had conventional radiation, an average of $16,961 compared with $12,622. "That's not a trivial amount of money per patient," Emanuel says.

Patients' out-of-pocket expenses were about the same.

Doctors Are Slow To Adopt Changes In Breast Cancer Treatment

Radiation oncologists have worried that getting the same amount of radiation in a compressed time frame may have long-term toxic effects, but four randomized trials with at least 10 years of follow-up have found similar cancer control and cosmetic benefit. And a 2008 survey of women found them twice as likely to prefer the shorter treatment. Other studies have found that radiation treatments can be difficult for low-income women to manage because of the need to take time off from work and for child care.

Having the radiation oncologists' professional society say that the shorter course should be the default option would help speed the transition, Emanuel says. So would having private insurers and Medicare switch to a bundled or reference payment, so they're not automatically paying more for the longer course.

"I think patients and breast cancer advocates need to take a stand on this," Emanuel says. "It's better for patients, and docs need to put their patients first."