Accessibility links
At Last, I Meet My Microbes : Shots - Health News At 31, a woman had the bacteria in her gut catalogued as part of scientific project that aims to characterize the creatures that live inside us and affect our health. Here's what she found out.

At Last, I Meet My Microbes

At Last, I Meet My Microbes 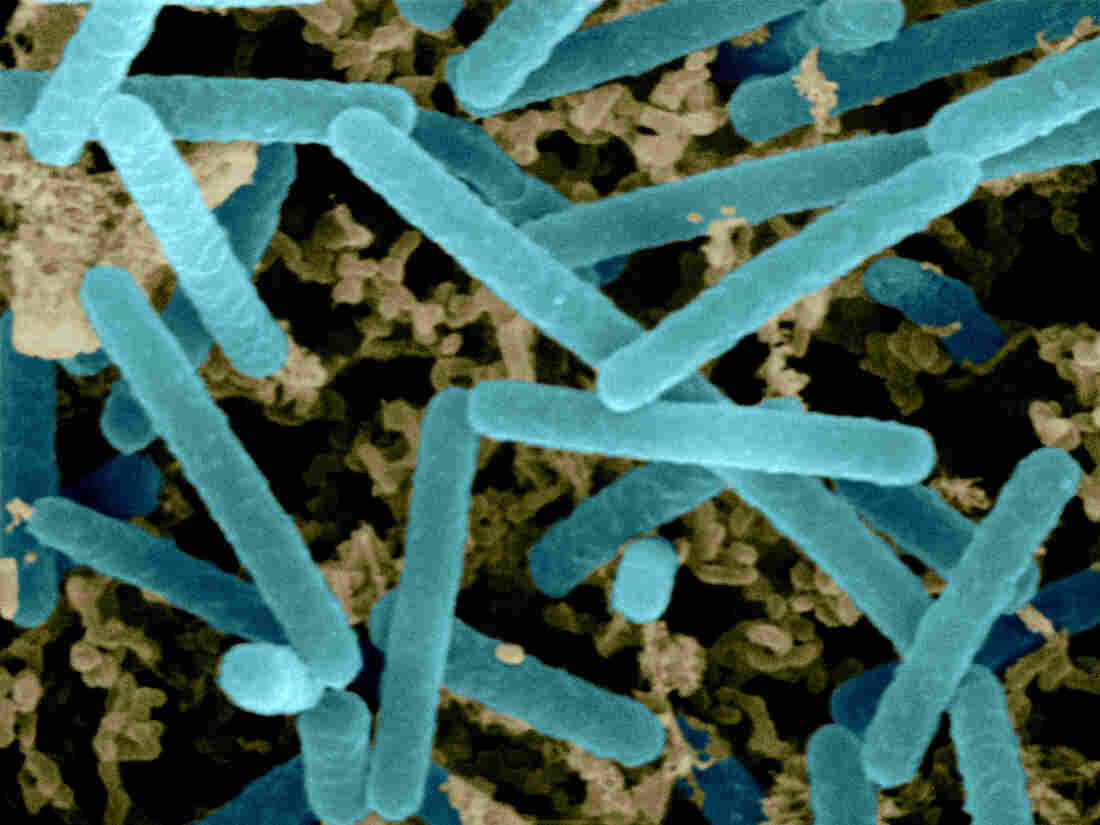 Lactobacillus acidophilus, which is one variety of the genus Lactobacillus is one of the common active cultures found in yogurt and in the human gut. Scimat Scimat/Getty Images/Photo Researchers hide caption

A veritable jungle of organisms is helping keep each of us alive. But we've been rather negligent hosts. For starters, we don't even know who has shown up for the party.

When I signed myself, my husband, our dog and my mother up for the American Gut Project to have our gut microbes analyzed last year, I had no idea what the results would turn up. And based on current research even Rob Knight, who helps run the project, couldn't predict whether I would share more microbes with my mom or with my husband.

So we waited for results. And waited. And waited. It turns out that being part of new research — no matter how well-planned — is an experience that requires a lot of patience.

Months after dropping off our samples at the post office, I got an email with a colorful, graphic display of my very own gut microbial communities. There were bar graphs, scatter plots and lots of unfamiliar names. 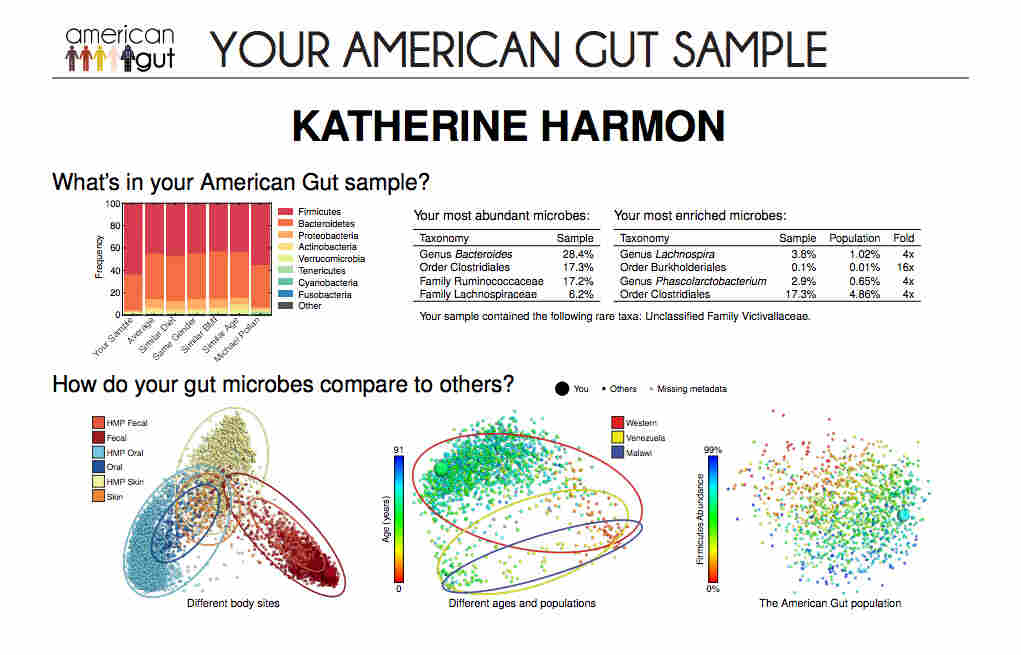 Katherine Harmon Courage's microbiome results. The distribution of major groups can be compared with others, including author Michael Pollan, in the top left graph. The chart on the top right lists some of the most common and the most unusual microbes found in her gut. The scatter plots below locate her particular sample against other populations. Katherine Harmon Courage for NPR hide caption 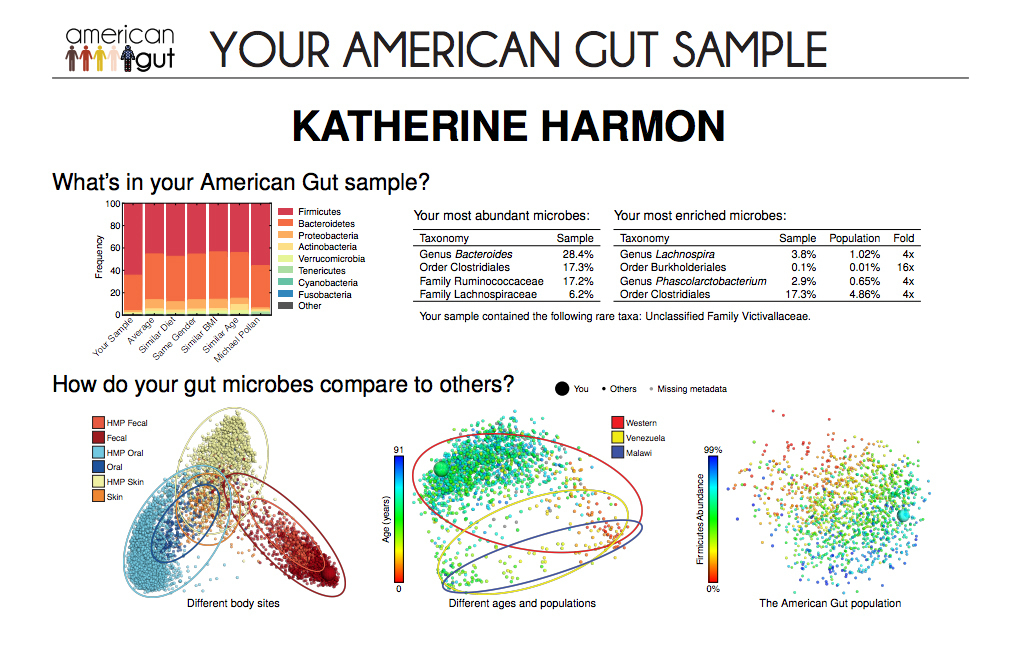 Katherine Harmon Courage's microbiome results. The distribution of major groups can be compared with others, including author Michael Pollan, in the top left graph. The chart on the top right lists some of the most common and the most unusual microbes found in her gut. The scatter plots below locate her particular sample against other populations.

So, after 31 years — and a few extra months of waiting — it was finally time to meet my microbes.

My gut is full of different species of Firmicutes, a whole phylum of bacteria. These can be incredibly diverse and include those in the order Lactobacillales (familiar to many from its member Lactobacillus, one kind of the bacteria that's active in some yogurts). I had many more of these bacteria than the average person, which was surprising. They've been linked to obesity, and I've always been lean.

The second most common were Bacteroidetes species (primarily in the Bacteroides genus), which help us mammals digest food. These guys indicate, according to a 2011 study in Science that Knight co-authored, that my diet is heavier on animal proteins and fats than on carbohydrates.

Poo And You: A Journey Into The Guts Of A Microbiome

I didn't expect that because at the time I, um, collected the samples I was eating a mostly plant-based diet. But perhaps the occasional pulled-pork sandwich or milkshake was enough to sway my bacterial profile. Although a different diet could change a person's microbe makeup within 24 hours, even a week on a different diet didn't entirely alter the profiles from long-term dietary patterns, the same study said.

So maybe my relative levels were due to my generally meat-and-potatoes upbringing — or my birth by cesarean section. Research published last year found that infants born by C-section had lower levels of Bacteroides (as I had) than did babies born vaginally.

Even the researchers who have been practically swimming in gut samples couldn't yet tell me exactly what my sample said about me — or about my health.

"We don't have a good handle on the bounds for what a healthy gut looks like in the larger population, or how lifestyle and diet drive the gut," says Daniel McDonald, a graduate student working on the project and studying quantitative biology and computer science.

And what about the other guts in our family? The sample from our pooch, Raz, is still (yes, still) awaiting enough fellow pet entrants to be analyzed.

As for the humans, the beasties living in my gut were not much of a match to those in my mother's — despite quite a bit of research hinting at mothers' microbial influence.

She had about similar abundances of Bacteroides and Firmicutes, as well as 13 rare species that didn't even register on my chart.

Even though my diet mirrored hers for the majority of my life, in recent years it has shifted to a more vegetarian mix, away from meat and dairy.

Maybe 20 years ago, there would have been a more obvious overlap between Mom's microbiome and mine. And perhaps having been born via C-section sent my microbiome on its own trajectory.

Still, when compared with the rest of the study population, we clustered closer together than an average stranger, most of whom had a majority of Firmicutes.

My gut microbes were much more similar to my husband's. He and I both had higher Bacteroides and lower Firmicutes and four times the average of some genus called Lachnospira.

As McDonald notes, "cohabitating is the likely driver of similarity." But, he cautions, "there is a large amount of day-to-day variation within an individual." And that means "multiple samples are necessary to begin to assess if there is a significant similarity." That's probably not what my husband wanted to hear.

Once there are more samples gathered consecutively from the same people, Knight says, he and his team might be able to make predictions about how specific changes in the gut, say an overabundance of Bacteroidetes or the presence of a little known species, might affect health.

But, as in the early days of the human genome, we are still very much in the process of mapping this uncharted intestinal territory. Researchers are just starting to gather enough points of microbial and human data to decide what a sea of Firmicutes, for example, might mean for health and whether or not people with particular disorders have similar microbial maps.

Some of these designations, such as Firmicutes, are as broad as an entire phylum, which can contain organisms as far apart on the tree of life as humans and conger eels. So to truly start to get an estimate on the closeness of two people's microbes, researchers must calculate the evolutionary distance between different samples, adding yet another time-consuming step.

And we also still don't have the concrete knowledge to translate microbiome analyses into advice for people to get healthier. "That's why we started the study — to be able to make these recommendations," Knight tells me. For now, however, they're just trying to find a few meaningful patterns in the vast microbial ocean of thousands of fecal samples.

The gut is just part of the picture. Microbes live all over our skin, in our nose and mouth, on our pets, in the soil and even in the air.

And until we know more about these mysterious microbes, perhaps we should sit back and marvel at the jungles of life that we really are. And do our best to keep our beneficial beasties happy.

This is the final story in a four-part series.

Katherine Harmon Courage is a freelance health and science writer in Colorado. She is the author of Octopus! The Most Mysterious Creature In the Sea, now available in paperback.