Accessibility links
Would You Like Health Insurance With Those Stocking Stuffers? : Shots - Health News While shoppers rush to the mall to pick up the last neckties and Transformers for Christmas, health officials are trying to pitch them on an unconventional gift this holiday season: health insurance.

Would You Like Health Insurance With Those Stocking Stuffers?

Would You Like Health Insurance With Those Stocking Stuffers? 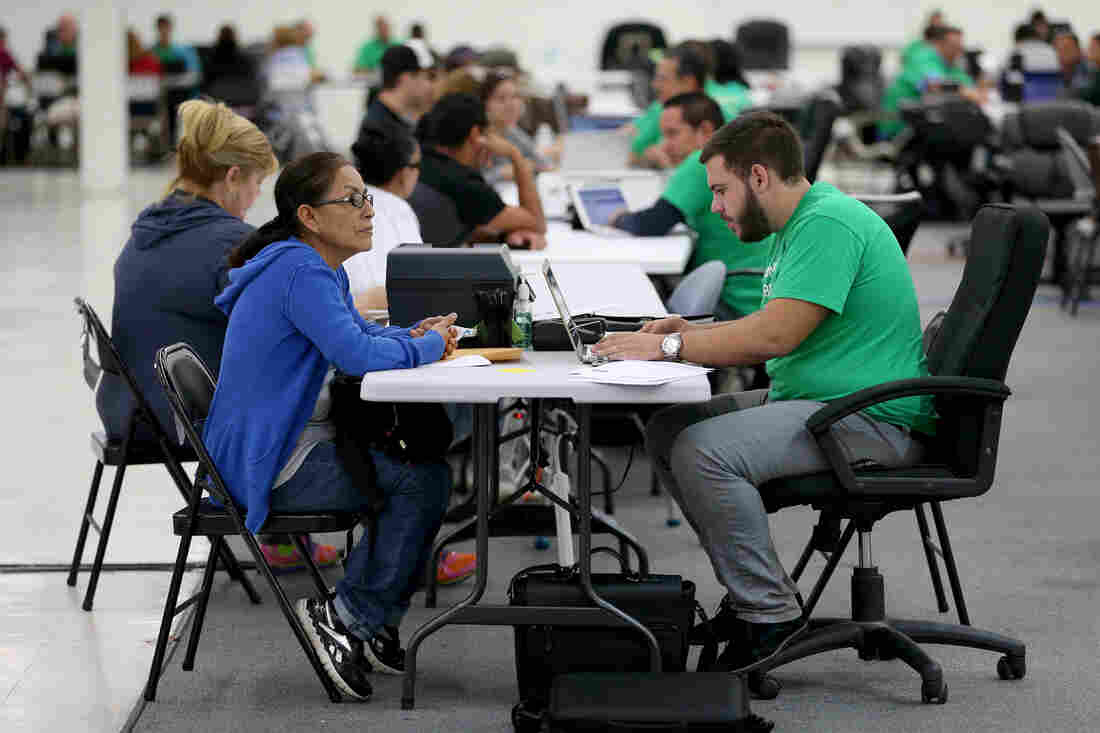 Need a gift for a 20-something kid about to age out of the family's health plan? Juana Rivera (left) discusses insurance options with Fabrizzio Russi, an agent from Sunshine Life and Health Advisors, at the Mall of the Americas in Miami. Joe Raedle/Getty Images hide caption 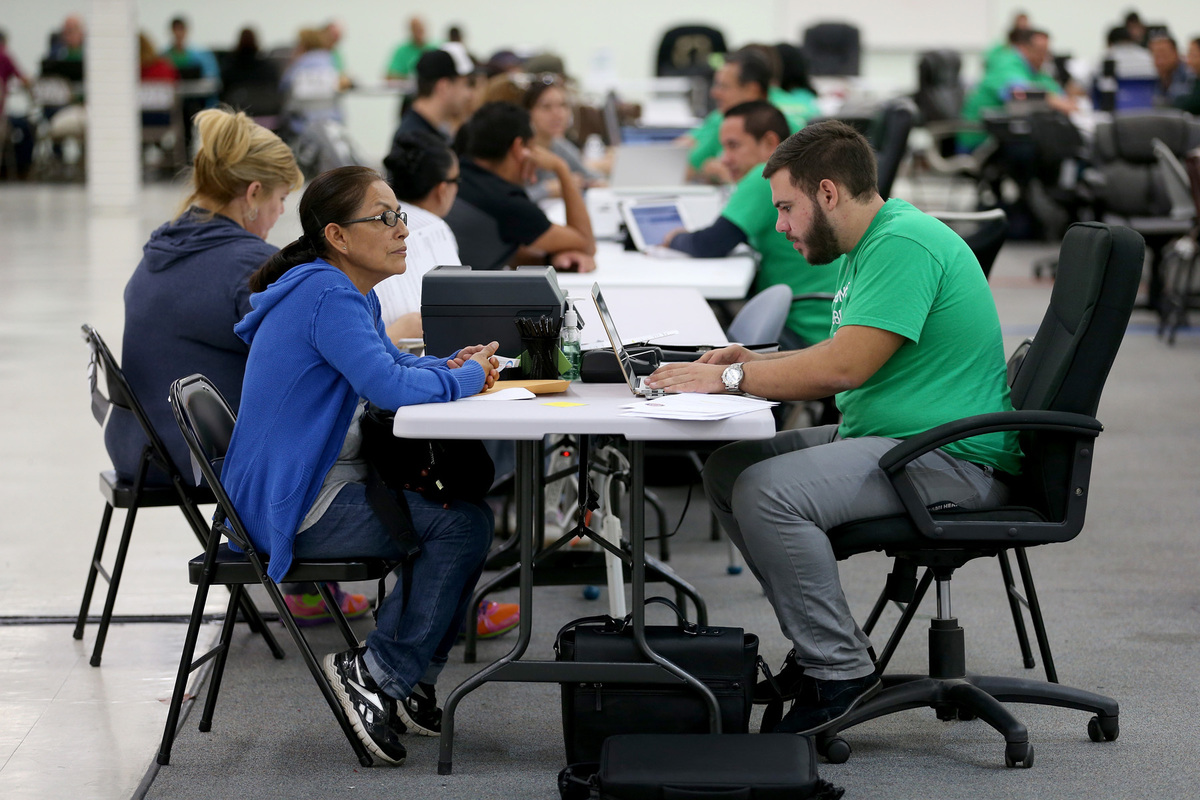 Need a gift for a 20-something kid about to age out of the family's health plan? Juana Rivera (left) discusses insurance options with Fabrizzio Russi, an agent from Sunshine Life and Health Advisors, at the Mall of the Americas in Miami.

California's health insurance marketplace, Covered California, has supported the development of more than 200 new storefronts at or near shopping centers across the state this year, each tasked with explaining the ins and outs of different health plans to holiday (and everyday) shoppers. 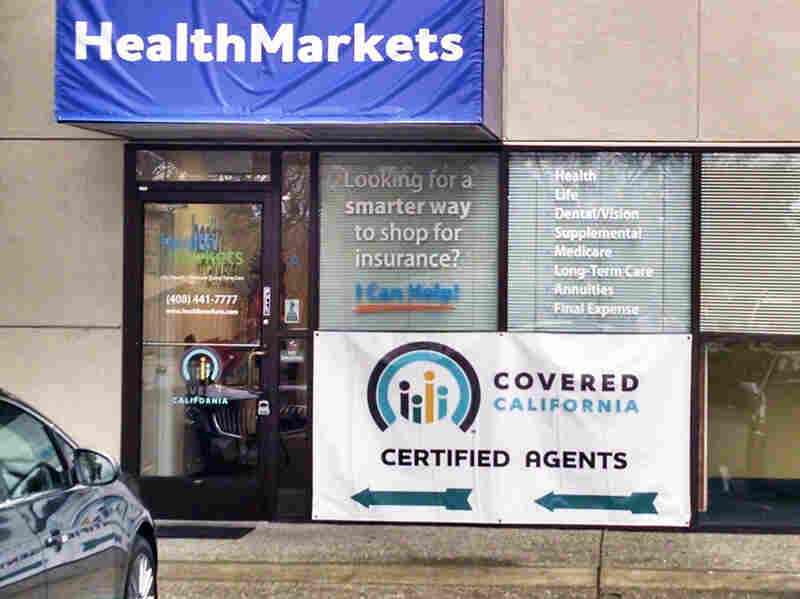 Storefronts like this one in Pleasant Hill, Calif., capture a lot of walk-in traffic for health insurance. Marc Protenic/HealthMarkets hide caption

"Especially during this time of year, malls have incredible foot traffic," says James Scullary, a Covered California spokesperson. "You may have someone who is running an errand or picking someone up who passes one of these facilities, and it passes in their mind: This is something they need to take care of."

Connecticut opened up storefronts in 2013 to great success, and the idea is being echoed across the country. The federal government has forged a partnership with Westfield Shopping Centers to set up kiosks in malls where people can talk to an enrollment counselor, in between visits to Macy's and Toys R Us. Officials have even suggested that health insurance could make a nice gift, especially for young adults who will soon age out of their parents' plan.

It's a new concept for many holiday shoppers.

"Health insurance? That's weird," says Irvin Barboza, who recently took his three kids to get their picture taken with Santa Claus at the Sunvalley Shopping Center in Concord, 30 miles east of San Francisco. "But I mean, I guess it's a good pitch. While everyone's shopping, might as well shop for health insurance, right?"

Agents with HealthMarkets, a national independent insurance agency, opened a storefront just down the block from the mall a couple of months ago, in time for the holiday shopping season. They planted several Covered California signs on the lawn to catch people driving by. About half their customers are walk-ins.

"A lot of them are going to the mall to buy Christmas presents and they see the sign and go, 'Oh my God, I have to do that,' " says Marc Protenic, head of sales.

He says this is a lesson learned from last year. Covered California pushed people to sign up online or over the phone. But it turned out many people preferred to get in-person help.

Customers Rush To Retail Store In Connecticut To Buy Obamacare

"What we discovered was that a storefront was better," Protenic says.

Covered California also realized that people often had several interactions with an agent, or visited the website several times, before they finally signed up, says Scullary.

"People wanted and needed several touch points before they would make a decision and pick a plan," he says, adding that establishing more storefronts was one way of creating more opportunities for this. "Being in the community, where people work or where they shop. It's just being where people are."

Many of the storefronts will close when the open enrollment period ends Feb. 15, Scullary says. But some, like the HealthMarkets shop near the Concord mall, plan to stay open year-round to help people with other insurance questions that arise in the off season.