Accessibility links
Your Online Avatar May Reveal More About You Than You'd Think : Shots - Health News Even if your avatar for games and social media doesn't look at all like you, it still says a lot about your personality, a study finds. Want to look friendly? Skip the shades; wear a sweater.

Your Online Avatar May Reveal More About You Than You'd Think

Your Online Avatar May Reveal More About You Than You'd Think

My Nintendo Wii character, my Mii, looks a lot like me. She has the same haircut, the same skin tone and even the same eyebrow shape. And while my Mii plays tennis slightly better than I do, I designed her to be a real, virtual me (albeit with balls for hands).

But it turns out I might not have needed to mimic my appearance to let people know what I'm like. 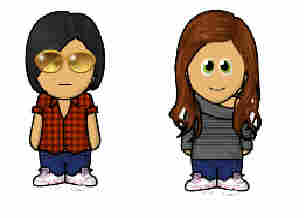 Wanna be friends? Two of the avatars that people created for the study. Katrina Fong hide caption 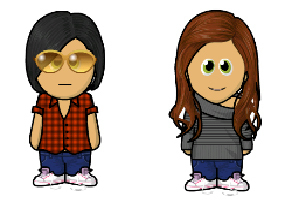 Wanna be friends? Two of the avatars that people created for the study.

Your digital avatar gives away more hints about your personality than you might think, according to a study published Friday in the Personality and Social Psychology Bulletin. And that's true even if you craft your avatar to look completely different from you.

"Despite avatars being whatever an individual wants them to be ... that person's personality can come through and be communicated accurately to others," Katrina Fong, a Ph.D. student in psychology at York University and lead author of the study, tells Shots. "Who we are in real life does to some extent drive our choices in deciding how to represent ourselves online."

For example, those high on agreeableness are more likely to give their avatars features that would prompt others to befriend them, Fong found. People who reported themselves as more extroverted, more agreeable and more conscientious were more likely to be accurately predicted based on their avatar, while people who said they were more neurotic garnered less accurate predictions.

A different group of 209 students was then asked to examine the avatars and rate what they thought of the creator's personality, based on the same five traits, and if they would want to be friends with the creator.

Can Losing Weight In Your 'Second Life' Help In Your First?

The raters accurately identified the creator's extroversion, agreeableness and neuroticism based on their avatar, even if the avatar didn't physically resemble the person. They couldn't, however, discern the person's openness or conscientiousness.

While it sounds surprising, it makes sense that an avatar can accurately convey someone's personality, says Kristine Nowak, an associate professor of communication at the University of Connecticut who was unaffiliated with the study. After all, it's something the user chose, as opposed to the body that they were born with and (short of major surgery) can't change.

Part of the reason raters could discern personality traits was due to certain features that creators gave their avatars, like open eyes.

When you meet someone in a crowded room at a party, you look at their eyes to determine their intentions, says Fong. Similarly, avatars with open eyes were more likely to be found agreeable and to make the rater want to be the creator's friend.

However, a neutral expression or any expression but a smile was less likely to make the rater want to be friends.

Other traits, like an oval face, brown hair or a sweater, were also more likely to make the rater want to be friends. And if you're looking to make friends, black hair, short hair, a hat and sunglasses are all no-nos.

The avatar's sex also played a role in how the creator was perceived. Male avatars were viewed as less conscientious and less open to experience than female avatars.

Overall, the perceptions mirrored how we make assessments of people IRL (in real life). "You look at an avatar and ask, 'Who do you think is more likely to be friendly?' " says Fong.

"People pick up on just these little subtle cues. It's almost like in poker — you have a tell," says Robert Andrew Dunn, an assistant professor of communication at East Tennessee State University who studies avatars and identity.

Using avatars or images to represent a person is only becoming more and more popular with the rise of social media, says Dunn. And we're making judgments about them all the time. "When you go on Twitter and you see somebody that still has that egg avatar, what does that tell you about that person?"

All of which leads me to believe that while I may not be able to pick a winning doubles player based on his or her Mii, I can probably pick out the one who wants to be my friend.