It was a heck of a Christmas for David Fairchild and his wife, Clara Peterson. They found out they were about to lose their new health insurance.

"Clara was listening to the news on Iowa Public Radio and that's how we found out," Fairchild says. They went to their health plan's website that night. "No information. We still haven't gotten a letter about it from them." 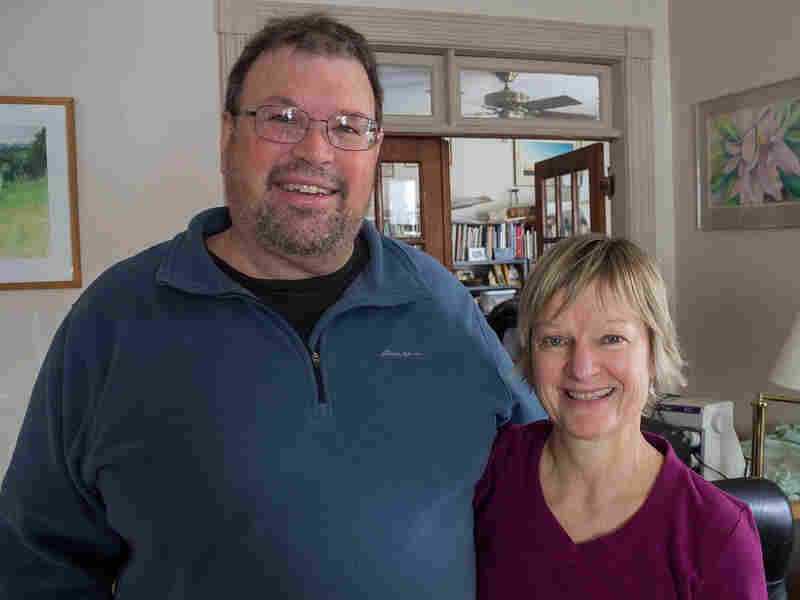 David Fairchild and Clara Peterson own a small cleaning business in Iowa. The couple had health insurance via CoOportunity Health before the co-op faltered. Clay Masters/Iowa Public Radio hide caption

The two are the sole employees of a cleaning service and work nights. Fairchild has chronic leukemia but treats it with expensive medicine. Last year they saved hundreds of dollars switching from the insurer Wellmark to a plan run by CoOportunity Health. For the first time in a long time, Fairchild says, they felt like they had room to breathe.

"Basically it covered our office visits; covered exams," he says. "It covered all but $40 of the medicine every four weeks. It was just marvelous. It probably was too good to be true."

It was for them. CoOportunity Health has failed. The Affordable Care Act set aside funding for health care co-ops, to enable the organizations to compete in places where there aren't many insurers. CoOportunity Health was the second- largest co-op in the country in terms of membership, and one of the largest in terms of the federal funding it received.

But then CoOportunity hit a kind of perfect storm, says Peter Damiano, director of the University of Iowa's public policy center. First, the co-op had to pay a lot more medical bills than those in charge expected.

"CoOportunity Health's pool of people was larger than expected, was sicker than expected," Damiano says. "So their risk became much greater than the funds that were available."

The reason the co-op's customers were sicker has a lot to do with what the insurance market looked like in Iowa before Obamacare. The largest insurer by far in the state was and still is Wellmark. But Wellmark decided not to offer any plans on Iowa's health exchange, leaving just CoOportunity and one other insurer — Coventry — offering plans on the exchange throughout the state.

On top of that, when the Obama administration in late 2013 allowed people to keep the insurance plan they already had, many customers happy with Wellmark stayed put. Damiano says this meant many of the customers who flocked to CoOportunity tended to be like Fairchild — people with expensive health problems who'd had trouble paying for insurance before, in the market Wellmark dominated. 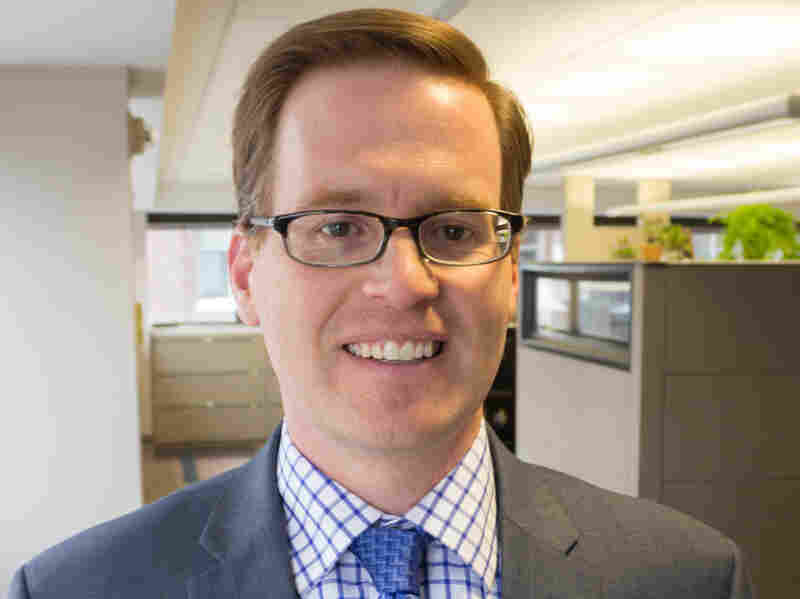 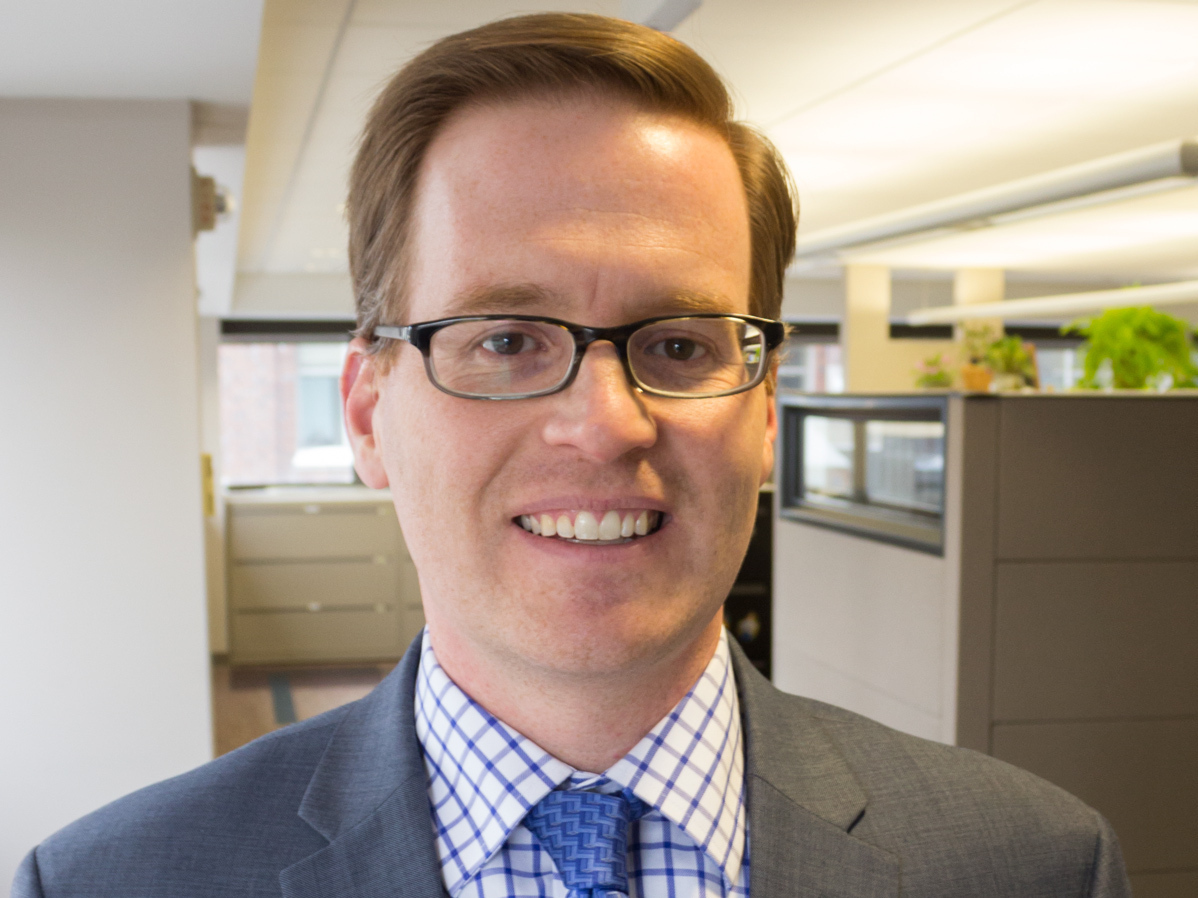 Iowa Insurance Commissioner Nick Gerhart urges clients of CoOportunity Health to move their coverage to another carrier as soon as possible.

"It was always going to be a challenging market to try to reach," says Damiano, "and on top of that, the whole idea of co-ops was relatively new and experimental. But it was to try to create competition, on that private sector approach," says Damiano.

Not only were the patients sicker, but CoOportunity's leaders initially thought they would enroll about 12,000 people in Iowa and Nebraska. They got about 10 times that, according to Nick Gerhart, Iowa's insurance commissioner.

Also, Gerhart says, the co-op thought it was going to get more federal money.

"On Dec. 16 around 4 o'clock we were informed they weren't going to get any further funding," he says. "Nothing was pulled — it just wasn't extended further."

Gerhart is now essentially the CEO of the co-op because the state has taken it over. He likens the situation to a small business suddenly having its credit shut off by the bank. Even though CoOportunity is not officially dead yet, Gerhart is telling its customers to switch insurers.

He says it's too early to make predictions about the fate for all co-ops.

"Ours was the second-largest in the country, so you've got to look at it that way," Gerhart says. "If the second-largest can't make it, how viable are the other ones? I don't know. But at the end of the day they didn't have enough capital to support 120,000 members."

In a written statement, Dr. Martin Hickey, chairman of the board of the National Alliance of State Health Co-Ops, said, "The news about CoOportunity Health is not a statement on the health insurance co-op program or the co-op concept. It's a reflection on the fact that all insurers — not just co-ops — are operating in unique markets with unique business plans and varying state regulations. The circumstances for CoOportunity Health in Iowa are not the same as those in the 23 other states in which co-ops are currently operating."

But the co-op's failure in Iowa has left Fairchild and Peterson scratching their heads.

"I mean the whole Affordable Care Act is [about] competition between insurance companies, and now we're back down to what?" says Peterson.

For them, only one option: Coventry. They've already applied through HealthCare.gov and now they're now waiting for approval for a plan that will cover a lot less of Fairchild's medicine expenses.

This story is part of a partnership between NPR and Kaiser Health News.