Accessibility links
Finding Crime Clues In What Insects Had For Dinner : Shots - Health News Forensic scientists can find crime-solving evidence in the tiniest details, such as the insects that arrive at the scene to feed on the decomposing corpse. 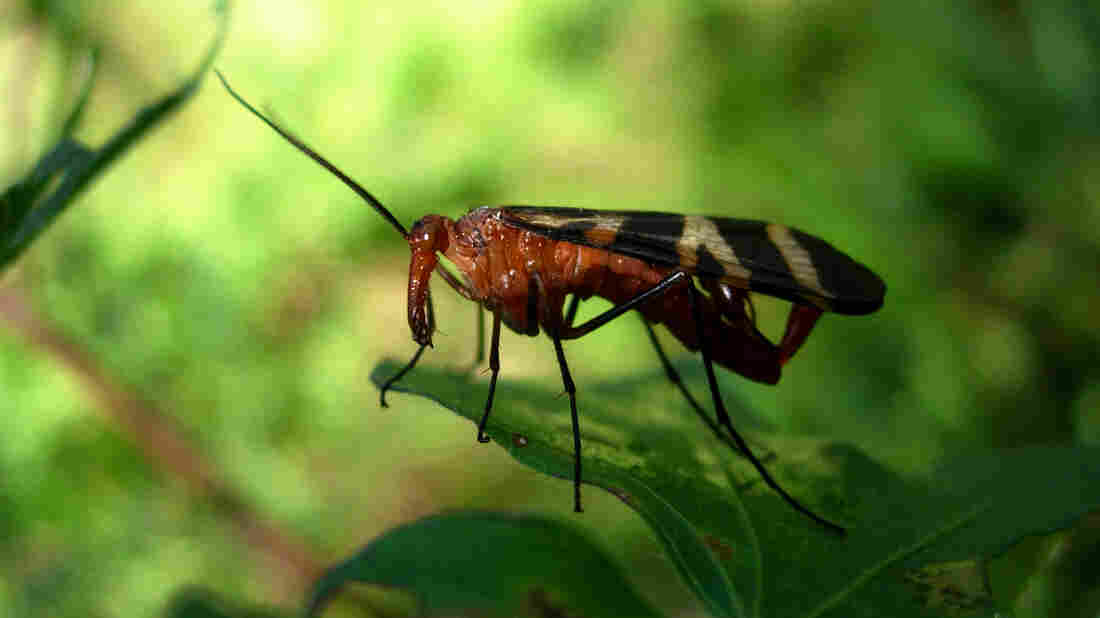 A scorpion fly perches on a leaf at the research farm where Lindgren studied the decomposition of human remains. Scorpion flies are among the first insects to visit a corpse. Courtesy of Natalie Lindgren hide caption 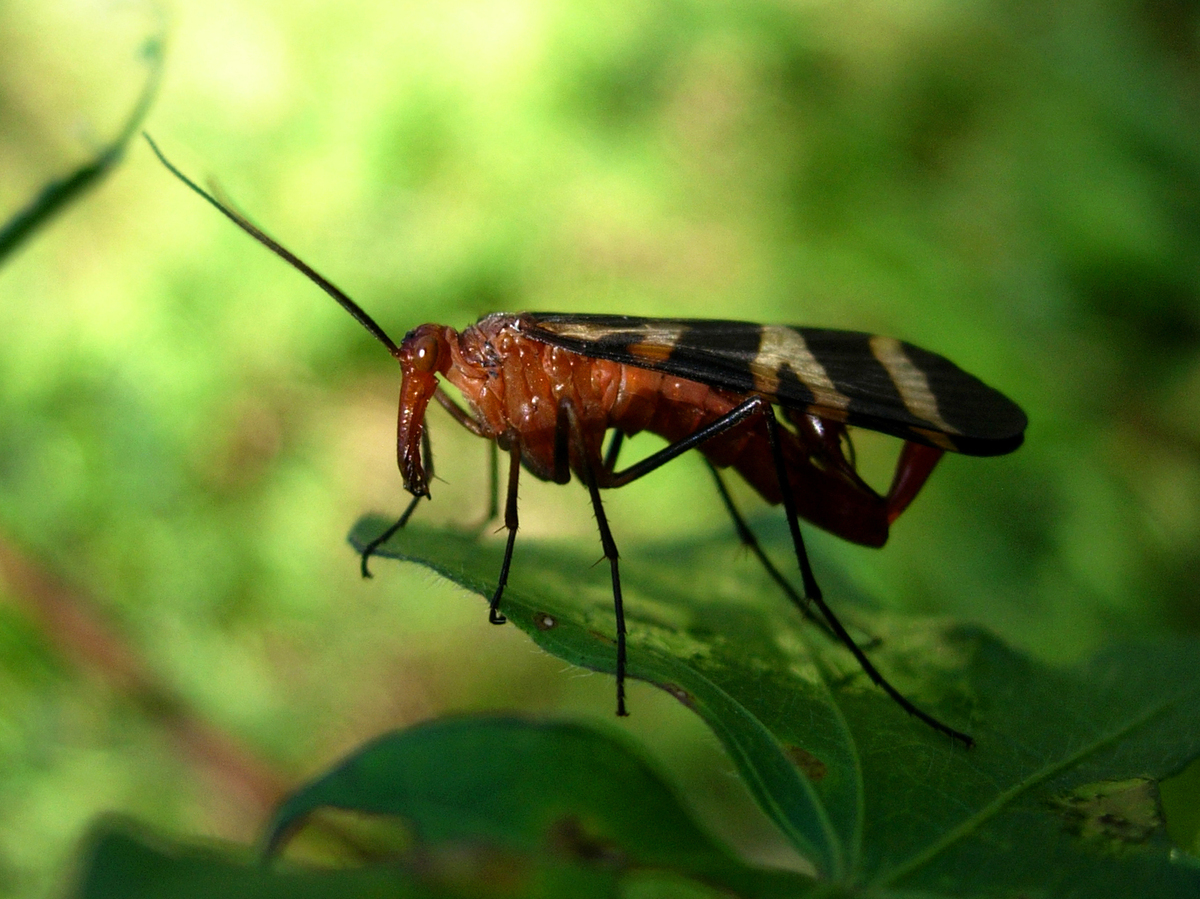 A scorpion fly perches on a leaf at the research farm where Lindgren studied the decomposition of human remains. Scorpion flies are among the first insects to visit a corpse.

As any CSI enthusiast understands, the tiniest details can help forensic scientists figure out how and when people died. These days, investigators are taking advantage of information about microbes that live on human bodies and the insects that come to feed on corpses to crack cases.

Entomologist Natalie Lindgren spent a year watching human remains decompose at the Southeast Texas Applied Forensic Science Facility, just outside Huntsville, Texas. She set up a lawn chair and monitored corpses for insects that would feed on the tissue. Several times a day, she would visit the bodies, collect any insects she saw and document the decomposition with photographs.

Lindgren specializes in forensic entomology — using insects and their arthropod relatives (think spiders and ticks) to uncover the truth at crime scenes.

The field is actually much broader than human decay. For example, a forensic entomologist might investigate how furniture got damaged and find a warehouse infested with wood-eating beetles.

As far as corpses go, researchers recognize a few common visitors. There are maggots, the larval forms of blowflies. And dermestid beetles, sometimes called skin beetles, are the same family of bugs that taxidermists use to scour flesh from bones.

Yet much of the field still focuses on two basic questions. What kinds of insects visit bodies, and what kind of evidence do the bugs leave behind? While working on her master's thesis, Lindgren tied a few more species of insects to human decomposition and showed the marks they might leave behind.

First to the scene were scorpion flies, which Lindgren said she didn't think had ever been associated with human remains. "We really care about who shows up first," Lindgren told Shots. The order of arrival for different insects can help establish how long a person has been dead. Lindgren said she was surprised when the scorpion flies hung around for at least a day and a half, outnumbering the flies she had expected to find. Now, if a forensic scientist sees scorpion flies at a crime scene, they know that the body is fresh. 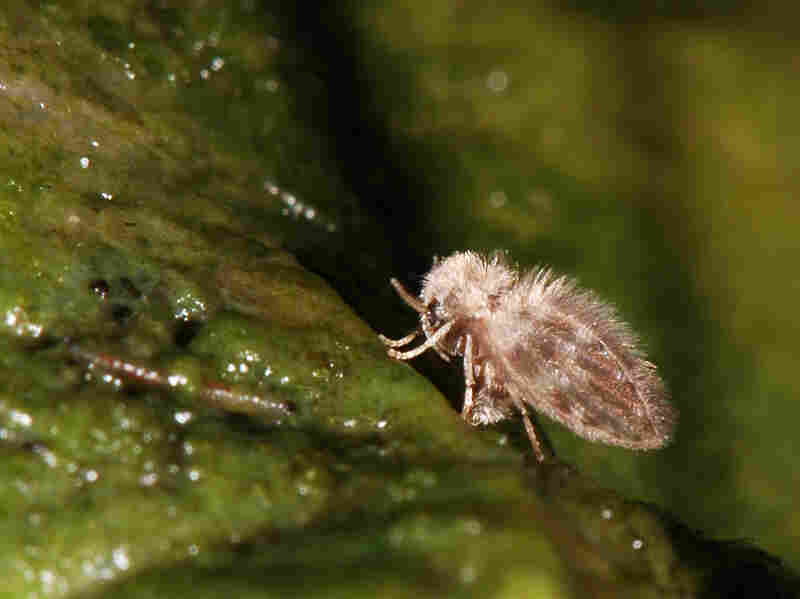 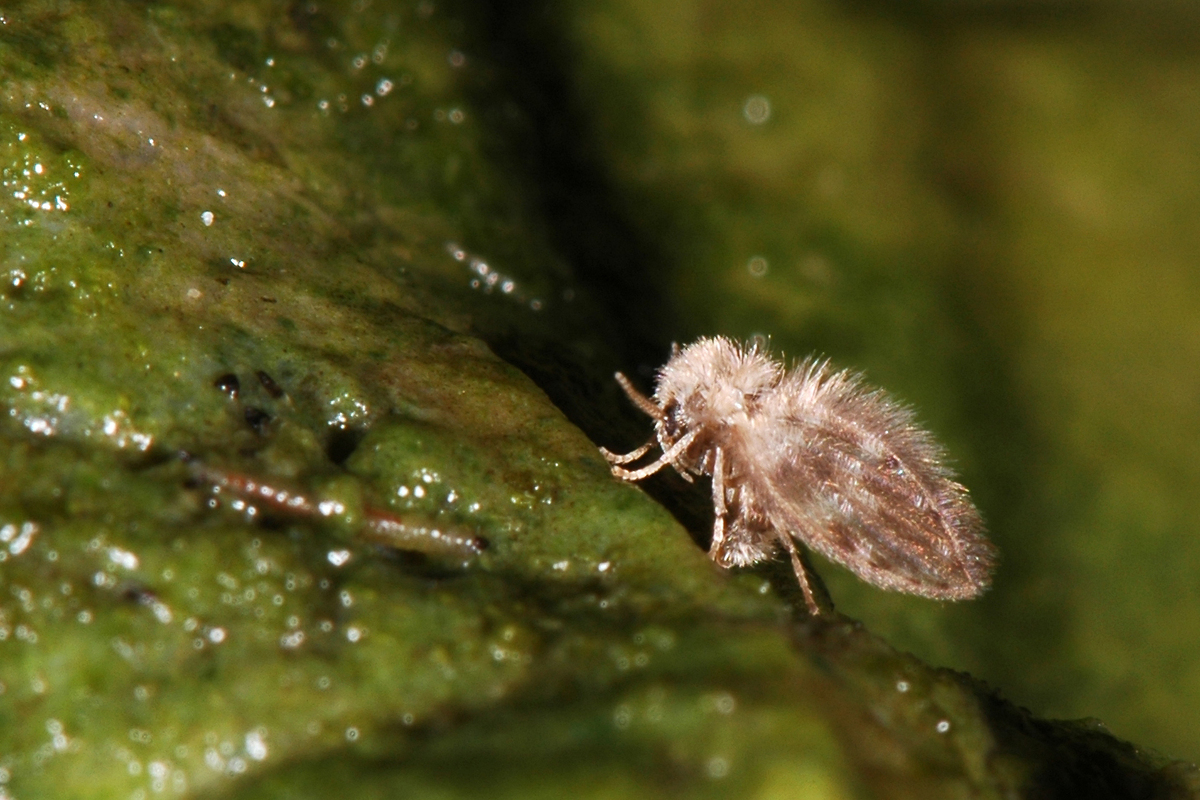 A moth fly eats the algae growing on a corpse recently removed from water. Adult moth flies also mated and deposited eggs on this body.

A chance discovery proved to be her most exciting finding. An unknown animal pulled off a cadaver's toenails, and blood had pooled where the toenails had been. "It looked like the cadaver had brightly painted toenails, and you couldn't help but look at the toes of this cadaver whenever you walked by," she said

One day, when she passed by this cadaver, she discovered that a caterpillar had moved in for a nibble. "It started chewing on the flakes of skin where the toenail once was," Lindgren said. Knowing that a cadaver might be missing a few bites is particularly important, because insect damage can start to look like a serious wound. Depending on how the body decomposes, Lindgren said, "these bite marks might not look anything like bite marks."

Mistaking something as small as insect bite marks for more serious evidence happens quite frequently. According to Jason Byrd, president-elect of the North American Forensic Entomology Association, it's very easy to confuse postmortem insect damage with an injury that could be crime-related. "A lot of the postmortem feeding of arthropods mimics abrasions," Byrd told Shots. "You may have a very small gunshot wound that starts to look like a very large gunshot wound." Byrd recalled one occasion when it appeared that a victim had been Tasered, and another occasion when law enforcement thought that the perpetrator had removed the victim's skin. In both cases, the damage had occurred after the victim was dead, and insects — not humans — were to blame.

For Lindgren, the toughest part of the research wasn't keeping company with corpses, but instead having to wait so long for the clues to develop. "I had so many questions," she said. "It was painful to be collecting so much data and to not have it be worked out at the time that I was collecting it."

There are plenty more questions to be answered. Every forensic entomology study is different because no two bodies are the same. "Every cadaver is an individual," Lindgren said, explaining that there are differences related to sex, fat content and cause of death. And after so much time around the dead, Lindgren is used to people who think what she studies is a bit revolting. "I think of the cadavers as people, and people aren't disgusting," she said. "We're all going to end up as cadavers one day."

Lindgren and her research colleagues wrote about their findings in the Journal of Medical Entomology.