Accessibility links
Obama's Big Bid To Change Sick-Leave Laws May Hinge On Small Business : Shots - Health News The president's call for mandatory paid sick days starred in his State of the Union address. But forget the big speech: It may be small businesses — and state lawmakers — that decide this debate. 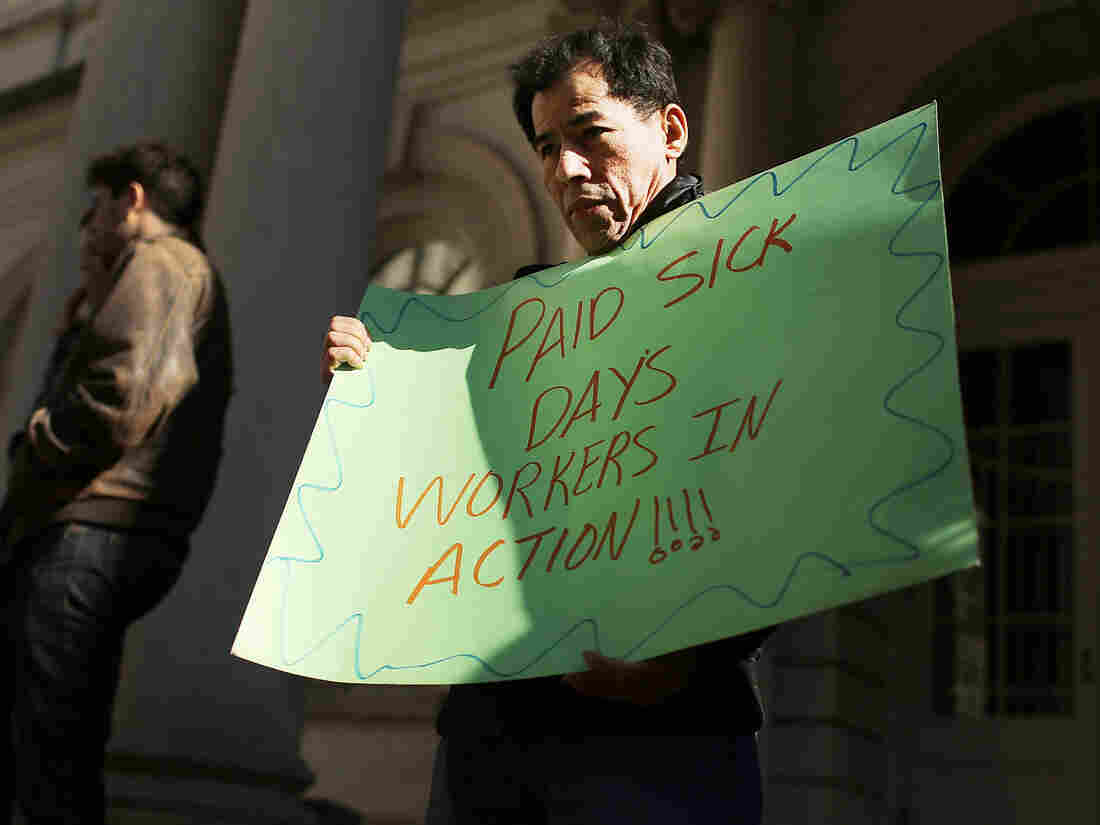 One demonstrator advocates for paid sick leave at a 2013 rally outside New York's city hall. The city is now one of several in the U.S. to have passed a measure mandating paid sick days. Spencer Platt/Getty Images hide caption 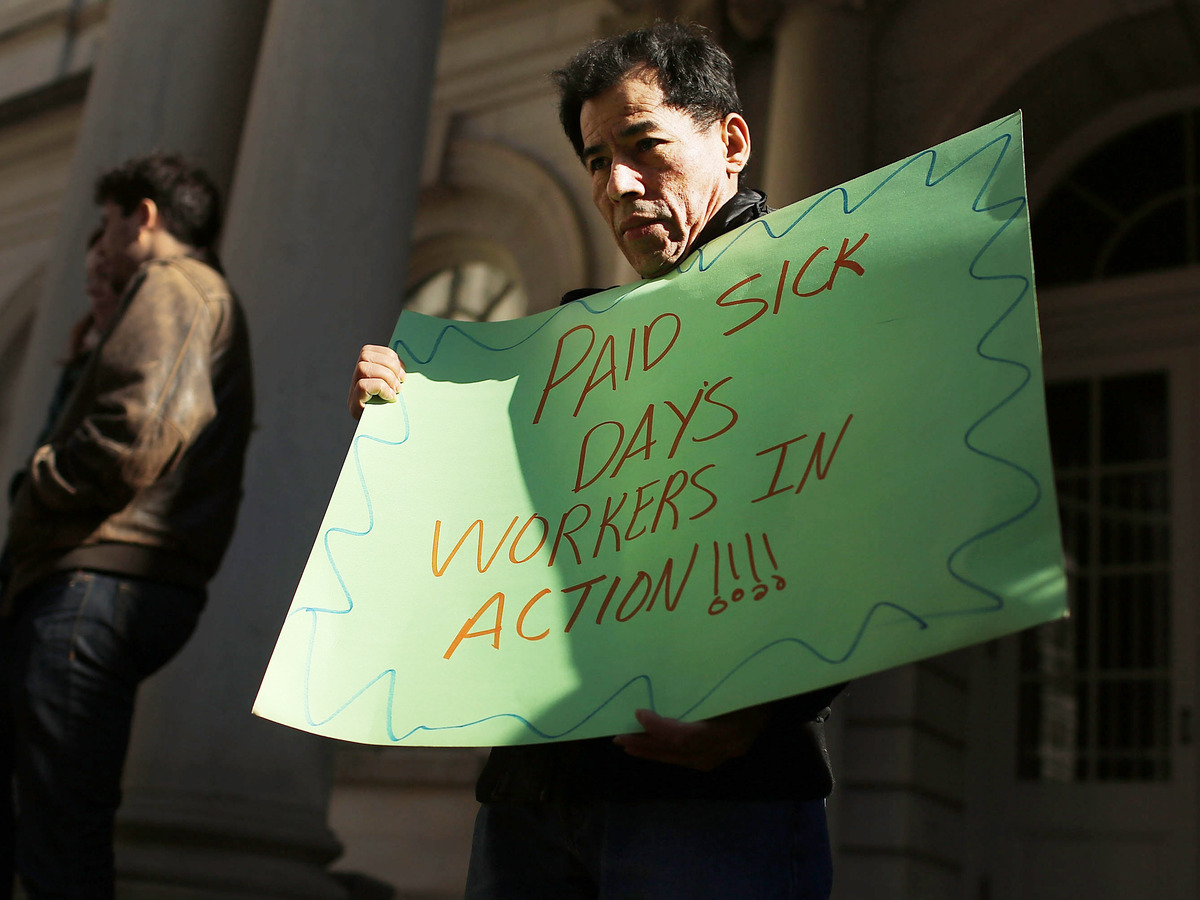 One demonstrator advocates for paid sick leave at a 2013 rally outside New York's city hall. The city is now one of several in the U.S. to have passed a measure mandating paid sick days.

In his State of the Union speech earlier this week, President Obama pitched a plan to boost what he called "middle-class economics." He asked Congress to help him make community college free, cut taxes for the middle class — and also do this:

"Send me a bill that gives every worker in America the opportunity to earn seven days of paid sick leave," Obama said. "It's the right thing to do."

Many in the business lobby aren't likely to agree with that. Lisa Horn, a lobbyist with the Society for Human Resource Management, says that businesses would prefer flexibility for workers to choose how to spend their leave — whether that means sick time or vacation. Horn asserts that the effect of a federal paid sick leave rule would be that businesses will cut back on other benefits.

"For all employers, regardless of size, they have a finite amount of resources that are dedicated to their total rewards package," she says.

Jack Mozloom, spokesman for the National Federation of Independent Business, agrees. He says the proposed mandate would create costs — not to mention some losers, too. Big firms can at least absorb the blow, he says. These companies have giant pools of workers they can shuffle around when workers don't show up. But small businesses don't have that advantage.

About 40 million workers, most of whom work part-time or in lower-wage jobs, don't earn paid sick leave. But state and local laws have been gaining ground since San Francisco mandated paid sick leave in 2006. Since then, 15 more cities and three states have passed similar measures — including Louis Lista's home state of Connecticut, in 2011.

Lista owns the Pond House Cafe, which employs fewer than 50 workers and doesn't fall under the state's new statute. Nevertheless, he has offered paid sick time for a decade.

"I don't think we've seen a huge cost impact," Lista says. "I think it's helped us a lot with the retention rate."

Besides the obvious benefit of keeping workers from infecting food or their co-workers, he says, the policy on paid sick leave also helps prevent competitors from poaching his people as easily.

State Of The Union Primer: What President Obama Proposed

Chibuzo Njeze owns Springview Pharmacy in Irvington, N.J., where local lawmakers also recently passed a bill. Njeze says he has offered the benefit for at least 16 years, and many of his employees have stayed at least that long, which saves him both time and customers.

"In the pharmacy, customers are usually cantankerous," Njeze says. "They're not happy to be there; they want to go home quickly. So if you have to keep training technicians, that slows you down considerably."

This observation is typical, says Ruth Milkman. She is a sociologist at The Graduate Center, City University of New York, where she studies both sick leave and family leave.

"With paid family leave, there was all this same sort of alarmist rhetoric about how this was going to be a disaster, especially for small businesses," Milkman says. "Actually, in that study we found that small businesses were more positive than the larger ones about the program."

Regardless, given the political divisions, the Republican-led Congress is highly unlikely to take up the issue. On this matter, both opponents and supporters of paid sick leave agree.

But Dan Cantor says that's almost beside the point. Cantor is director of the Working Families Party, a political group that campaigns on progressive issues. He says sick leave measures are not just being addressed at the federal level; they're also gaining support in state legislatures, including in Maryland, New Jersey and Oregon.

"The fight is at the state level," Cantor says. "That's why the president putting his voice behind this is so valuable. It just raises the stature of the issue tremendously."