Accessibility links
VA Steps Up Programs As More Veterans Enter Hospice Care : Shots - Health News As the generation that served in World War II and Korea grows older, the demand on the Department of Veterans Affairs for end-of-life care is growing with them. Now, the VA is trying new ways to help. 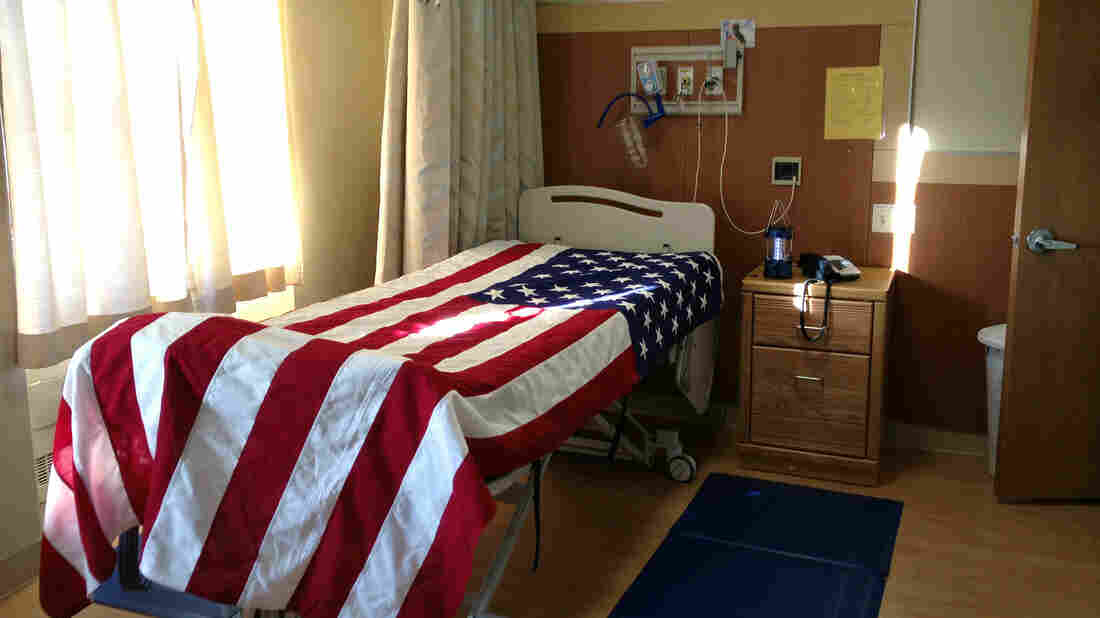 A hospital bed is draped with a flag after a veteran died in the hospice ward at St. Albans VA in Queens, N.Y. Quil Lawrence/NPR hide caption 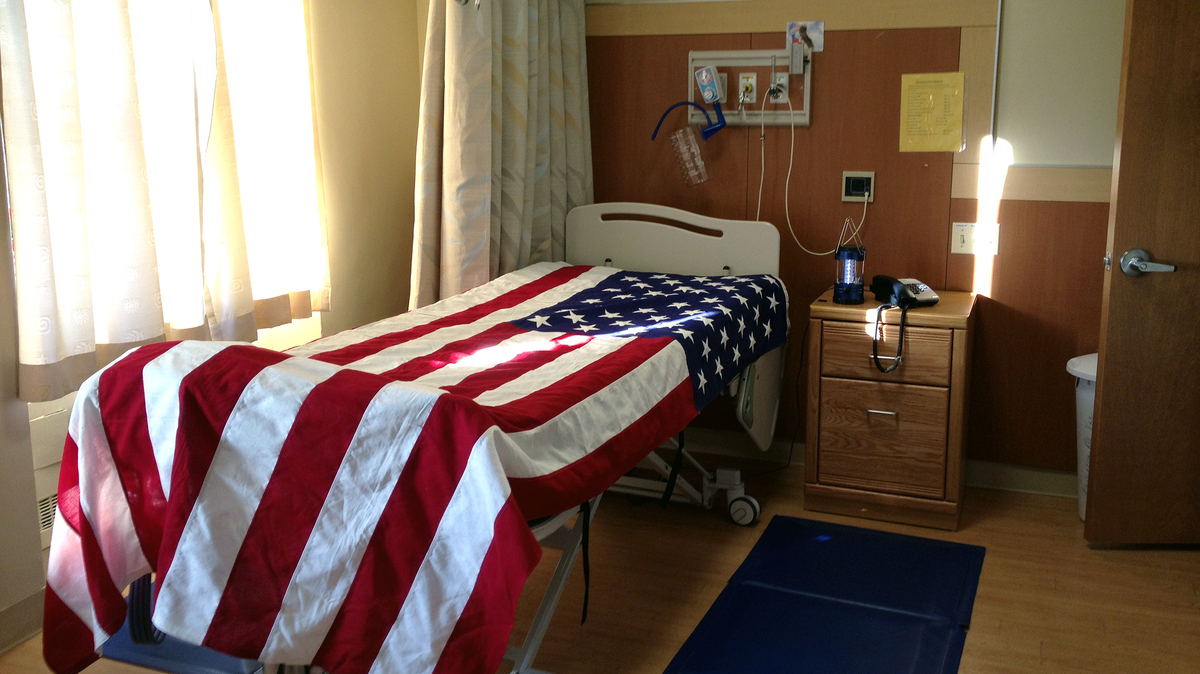 A hospital bed is draped with a flag after a veteran died in the hospice ward at St. Albans VA in Queens, N.Y.

Ask Americans if someone in their family served in the military, and the answer is probably no. After all, fewer than 1 percent of Americans serve these days.

But ask if one of their grandfathers served, and you'll likely get a different answer. Between World War II and the wars in Korea and Vietnam, millions of men were drafted into service — and both men and women volunteered.

Now, that generation of veterans is getting older. And as many of them near the end of their lives, aging into their 80s and 90s, the demand for hospice care has been growing with them. That means that the Department of Veterans Affairs is spending a lot more on what's known as end-of-life care.

"I think they call it end-of-life care," notes Thomas O'Neill, a 68-year-old resident at the St. Albans VA hospital in Queens, N.Y. "But whatever it is ... they treat you like gold. If you're going to be sick, this is the place to be."

O'Neill served a year in Vietnam, from 1966 to 1967, at a time when the war was killing more Americans in a year than the total U.S. casualties from Iraq and Afghanistan combined.

"The only good thing was the nighttime, because you knew another day closer to coming home," he says. "To be honest with you, I was scared. I was very scared the whole year — and I don't think I was the only one."

When he came home, he didn't talk to anyone about the war. O'Neill says he nearly drank himself into the grave. In 2011, he finally went to the VA to treat the post-traumatic stress disorder he'd been enduring for 40 years. Last year, he learned he has terminal cancer.

Coming to terms with the end of life can be a bit different for veterans, says Dr. Alice Beal, who directs VA palliative care for most of New York City.

"If a veteran's been in combat, a veteran's likely to have killed," Beal says. "I think no matter what your culture is, when you meet your maker — even if it's been to save your buddy, to save your life, to save your country — it's just a burden the rest of us haven't even thought of."

Sometimes that means vets want to tell their stories at the end of life, Beal says. Sometimes the stories come unbidden.

"If you've had blood on your hands, it comes up," she says. "People who have PTSD, maybe have not had it unmasked their whole life, but as they're dying, all of a suddenly they get flashbacks."

Beal says the goal in hospice is to make life as good as it can be for as long as possible; that usually means focusing on relieving pain for the last weeks or months of life.

The hospice ward is a contradiction: It's brightly decorated, and at the entrance there's a fish tank and an electric fireplace. But there's also usually a room recently vacated, with an American flag draped on the bed and a lantern on the nightstand honoring a veteran who passed on.

"It's a real tossup between respect and release. Around here we tend to be full of life," Beal says. "But you don't want to be too joyful in the presence of a family who is grieving."

All VA facilities now have a palliative care team, but only a fraction of veterans enter VA hospice, according to Dr. Scott Shreve, who directs VA hospice care nationwide. Shreve says the vast majority prefer to stay in their communities and near family instead.

The VA and the National Hospice and Palliative Care Organization are collaborating on a project called We Honor Veterans, to help civilian hospice workers ask the right questions.

Volunteers with We Honor Veterans sometimes show up to find elderly veterans who haven't mentioned much about serving in the military to their family or community, like 92-year-old Florence Keliher, in Hallowell, Maine.

"I served during World War II in the Army Nurse Corps. I was on Tinian, the little island in the South Pacific," Keliher says. "We had a ward full of patients — airplane crashes and things like that. They flew from Tinian to Japan to bomb. Some had trouble taking off sometimes."

Keliher's son, Pat, who lives up the road, says he never heard much about his mother's time at war until a grandchild asked to type up some of Keliher's stories:

"The patients we nursed in the wards on afternoon duty broke our hearts. It sounds like a cliche, but they were so young. Malaria, horrible burns. ... I was only 23 years old, but I felt much older than the patients I tended, some of whom called for their mothers in their distress."

Besides Keliher's kids and grandchildren, a volunteer with Beacon Hospice also visits her regularly as part of the We Honor Veterans campaign. They play cribbage and swap stories.

Shreve says only half the community hospices nationwide are taking advantage of the We Honor Veterans program, which is free. He'd like to see more of them get on board. That's because half a million veterans will be needing end-of-life care each year for the next five years.