Accessibility links
Measles Outbreak Sparks Bid To Strengthen Calif. Vaccine Law : Shots - Health News California lawmakers are proposing new limits on the ability of parents to opt out of vaccinations. It's a response to a measles outbreak that originated in that state. 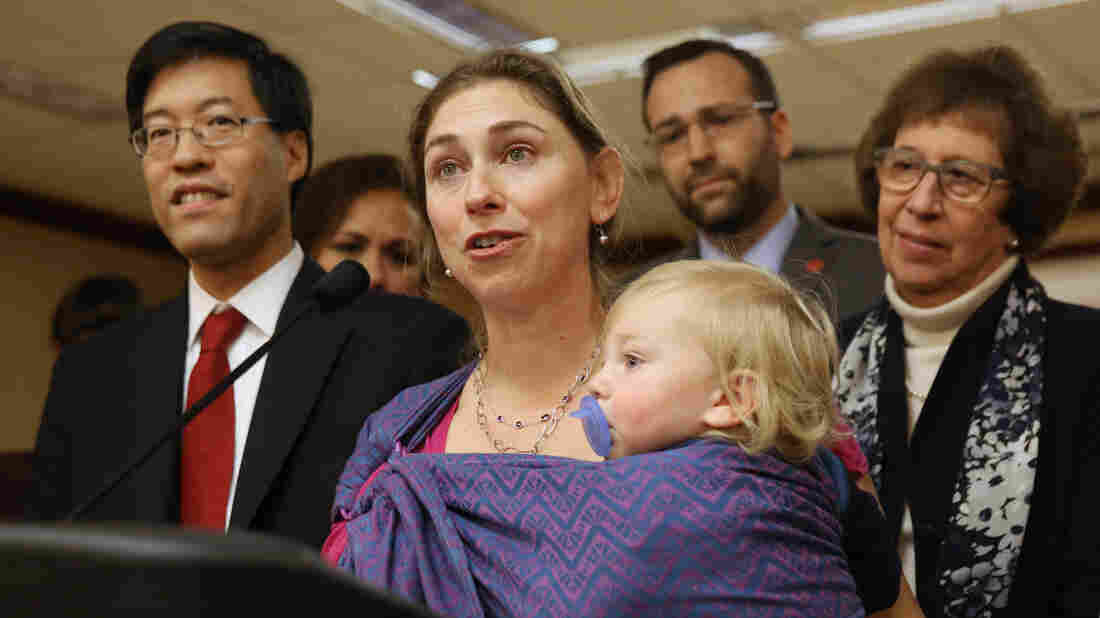 Leah Russin, of Palo Alto, Calif., holds her son, Leo, 16 months, as she speaks Wednesday at a news conference in support of proposed state legislation that would require parents to vaccinate all school children. Rich Pedroncelli/AP hide caption 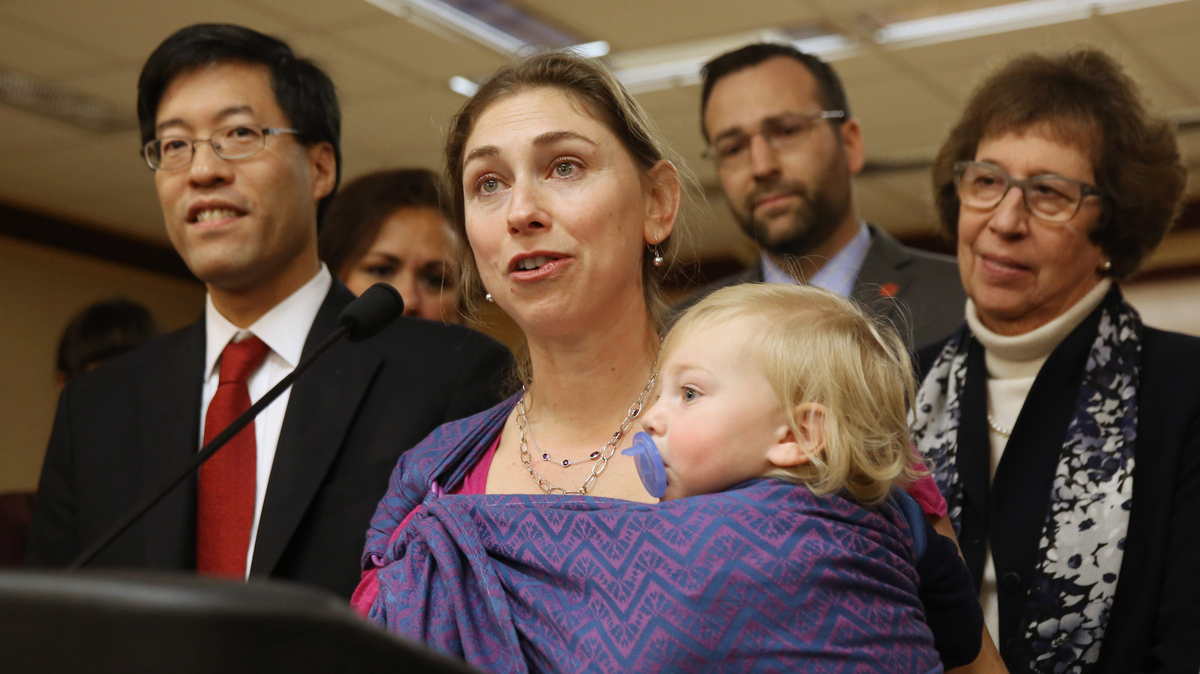 Leah Russin, of Palo Alto, Calif., holds her son, Leo, 16 months, as she speaks Wednesday at a news conference in support of proposed state legislation that would require parents to vaccinate all school children.

State lawmakers in California introduced legislation Wednesday that would require children to be fully vaccinated before going to school, a response to a measles outbreak that started in Southern California and has reached 107 cases in 14 states.

California is one of 19 states that allows parents to enroll their children in school unvaccinated through a "personal belief exemption" to public health laws. The outbreak of measles that began in December in Anaheim's Disneyland amusement park has spread more quickly in communities where many parents claim the exemption.

"Every year that goes by we are adding to the number of unvaccinated people and so that's putting everyone at greater risk," said Pan, who is also a pediatrician. "We shouldn't have to wait until someone sickens and dies to act."

The exemption isn't new — it's been around since the 1960s. But the number of parents taking the exemption went way up in the past decade. In some schools in California, more than half of children have an exemption.

If their law passes, all of those children would be required to get fully vaccinated in order to go to school. Pan says the most parents in the state would support that.

"People are speaking out, and they are calling my office and saying, 'Please help us by getting children immunized, so my children can be safe,' " he said.

Dorit Reiss, a law professor at the University of California-Hastings in San Francisco, supports adding further restrictions to personal belief exemptions, but she worries that the bill may go too far. She says a small minority of parents, who remain anti-vaccine despite the scientific evidence that inoculations are safe and life-preserving, may just try to skirt the new law.

"They'll fake vaccination by finding a doctor willing to sign something saying the child is vaccinated when he isn't," said Reiss.

If a school doesn't know who isn't vaccinated, they don't know who to send home in case there's an outbreak.

Reiss also worries that some particularly fearful parents might try to "detox" their children after vaccination with methods such as chelation, which has been linked to the deaths of children. Others might choose to homeschool their children.

The legislation will almost certainly face opposition from families who don't want to vaccinate their children. It is not yet clear how likely it is that the bill will pass, but both houses of the California legislature are Democratic, as is Gov. Jerry Brown.

"While a small number of children cannot be vaccinated due to an underlying medical condition, we believe there should be no such thing as a philosophical or personal belief exemption, since everyone uses public spaces," Senators Boxer and Feinstein wrote. "As we have learned in the past month, parents who refuse to vaccinate their children not only put their own family at risk, but they also endanger other families who choose to vaccinate."