Accessibility links
Being With People Like You Offers Comfort Against Death's Chill : Shots - Health News Iggy Ignatius bet that immigrants from India would long to live with other Indians in his Florida condos. He was right. Psychologists say intimations of mortality make us want to be with our own kind. 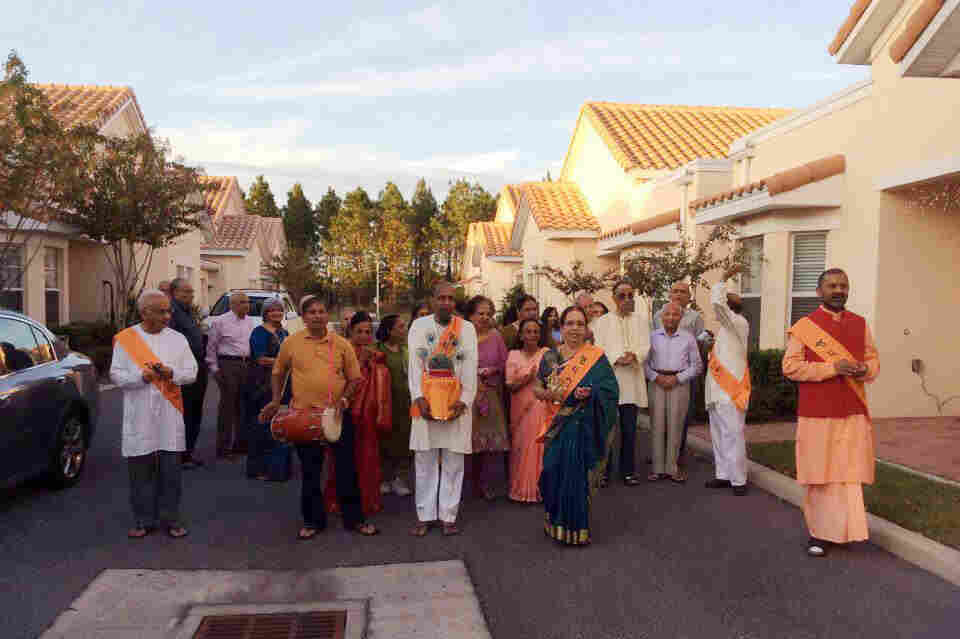 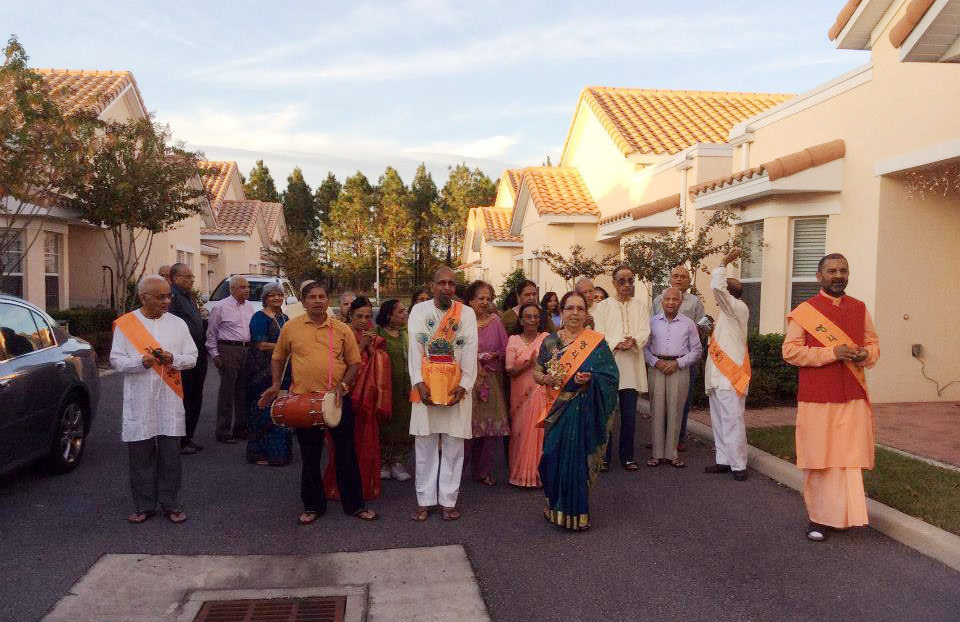 Residents of ShantiNiketan, a retirement community near Orlando, Fla., walk in a Hindu religious procession.

Iggy Ignatius was born in India. Even though he moved to the States in his 20s, he still felt that India was the place he belonged. He always thought he'd retire there. But when the time approached, there was a problem.

"My daughters, my son, my grandchildren are all like chains that do not allow you to leave for India," Ignatius says.

He couldn't imagine leaving them to go to the place he belonged. He was torn. And then one day it hit him. What if he built an Indian retirement community — in Florida? 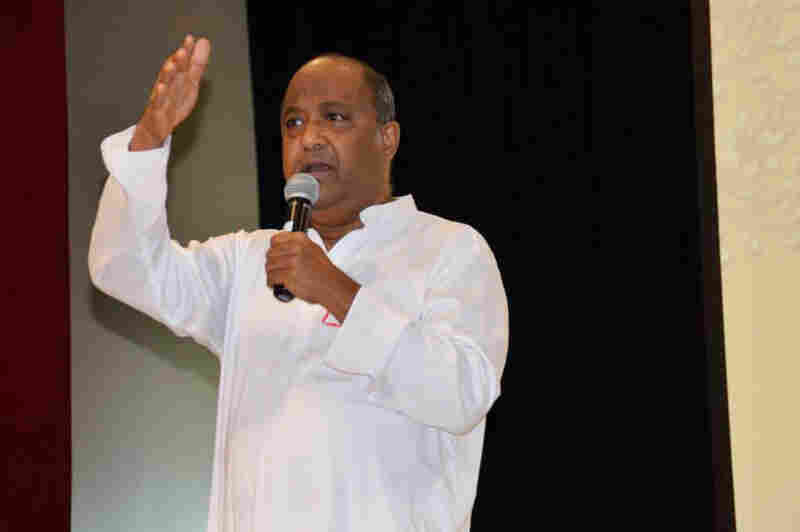 Iggy Ignatius speaks at a meeting in California in November 2014. Courtesy of ShantiNiketan Inc. hide caption 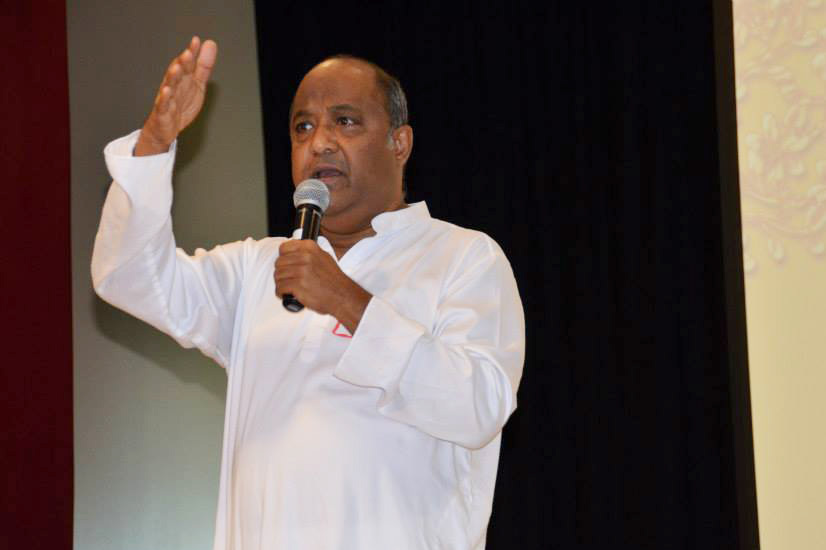 Iggy Ignatius speaks at a meeting in California in November 2014.

It would look just like an Indian village, with low buildings and a big courtyard. There would be palm trees. Greenery. He'd serve Indian food — curry, rice, homemade yogurt. There would be yoga. Bollywood movies. But most of all, other Indians.

Looking around ShantiNiketan, the community in Tavares, Fla., that Ignatius created, you'd never know you weren't in India.

He started the project in August 2008. And just one month later, the stock market crashed. Iggy thought ShantiNiketan was doomed. He was trying to sell two-bedroom condos for $130,000, and across the street you could get a four-bedroom, single-family house for $100,000.

But, it turned out, the fact that Florida was in the worst housing crisis in the history of the state was not a problem at all. He sold out an entire wing of condos instantly.

That got us wondering, what had Iggy tapped into? What human impulse is more compelling than money?

"It's a gated community where you will be living with people of your own cultural background," Iggy says in one of the YouTube advertisements for the complex.

So I went down to Florida to find out if the people had bought out of some primal desire to stick with their own. And if so, was that OK? What if you flipped this and this is like one of those country clubs that only let in white men? 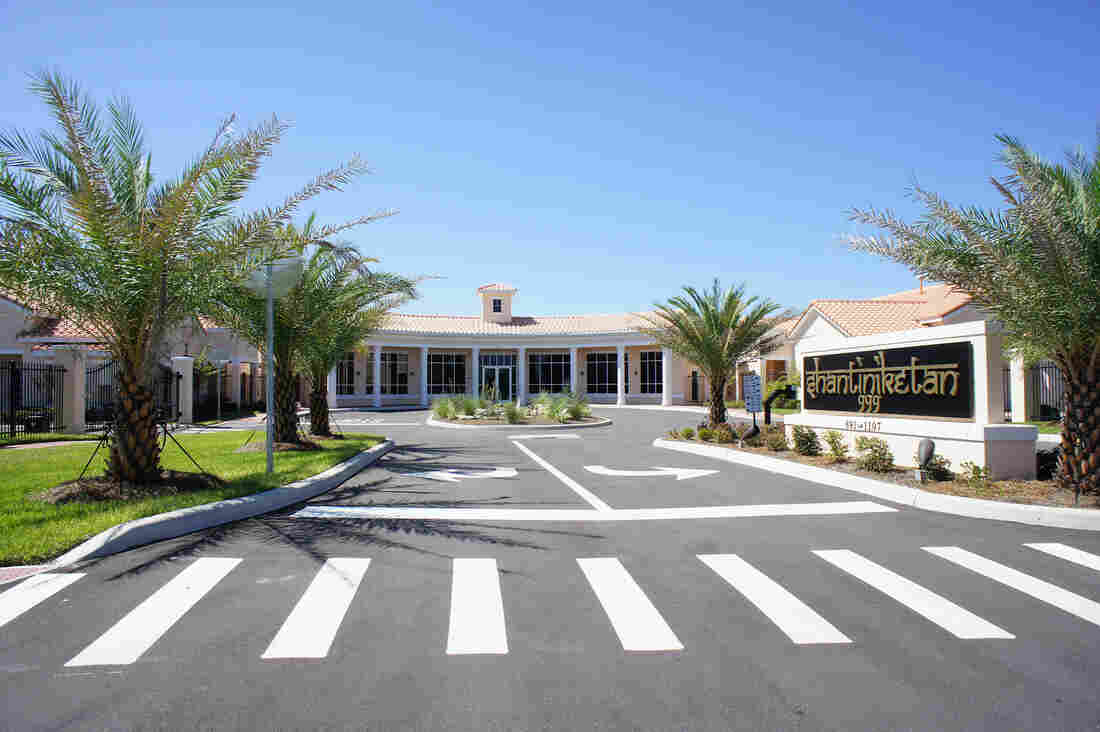 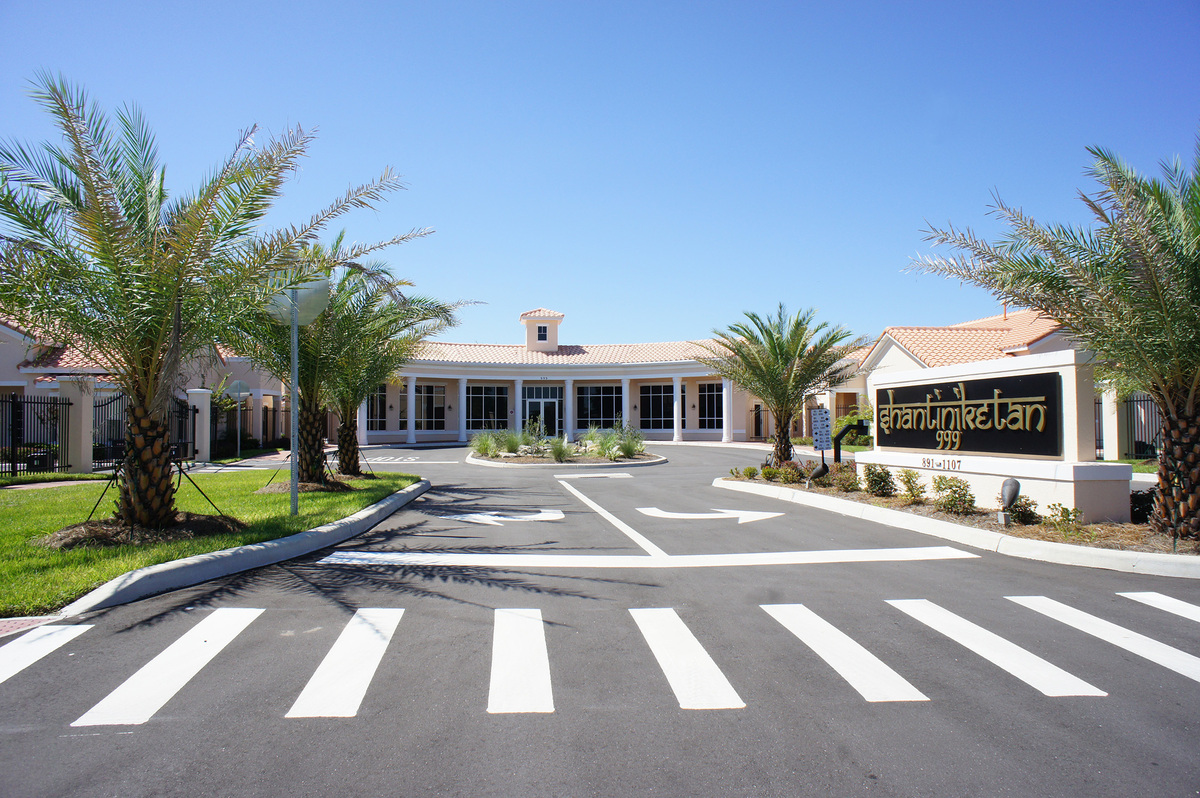 That comparison is unfair, Ignatius says. "We would let anybody in."

But no one at ShantiNiketan was shy about admitting that part of what everyone was paying for was being around people like them.

It can be exhausting to live in a culture as an outsider, Garimella and others say, a place where people don't understand your accent or your beliefs.

"You know I would dread to go through the drive-through to even buy a cup of coffee," Ignatius says, "because when I ask her for a coffee, she just wouldn't understand. 'What? What do you want?' "

So the return to a community of people just like you is a relief. "Life is just better here," Garimella says.

But there's a dark side to this homogenous heaven, its founder says. "I don't want my children or grandchildren to live in a community like this," Ignatius says. "Retirement communities are places where people go waiting to die."

And at that time, he thinks, it's beyond your control. No matter who you are, you'll experience a deep primal desire to withdraw, like a salmon swimming upstream to the place of its birth to spawn and die. "I think that is an animal instinct which we as human beings seem to have."

Iggy is absolutely right, according to Jeff Greenberg, a professor of psychology at the University of Arizona. If you raise the specter of death in a person's mind, he says, Christians like Christians better; Italians like Italians better. Even Germans, who are usually pretty lukewarm about other Germans, if you get them to contemplate their own mortality, suddenly they really like Germans.

"If you interview Germans near a funeral home, they're much more nationalistic," Greenberg says.

And the reverse is also true: We like people outside our group much, much less. "People become more negative toward other cultures," Greenberg says. "Because death haunts us as it does, we have to do something about it."

Greenberg thinks that in this odd way we try to fend off death. He figures that people who are not in your group in some very primal way make you feel invisible.

That's unpleasant at any stage of life, but particularly so when the threat of disappearing is so real.

"And so to manage the terror that we're just these transient creatures," Greenberg says, we shoo away those people who make us disappear.

When we dive deep into our own category, what Greenberg thinks we're actually getting is the lovely illusion that we're significant, and we're enduringly significant.

This week's episode of Invisibilia, NPR's new show about human behavior, explores the idea of categories and how they influence our choices in life. You can hear the program on many public radio stations this weekend. The podcast is available for download on NPR.org and on iTunes.