Accessibility links
Schools Not Keeping Track When Kids Are Behind On Their Shots : Shots - Health News California lets kindergartners start school as long as they've had the first dose of all required vaccines. But some schools aren't tracking whether such kids end up getting all the doses they need. 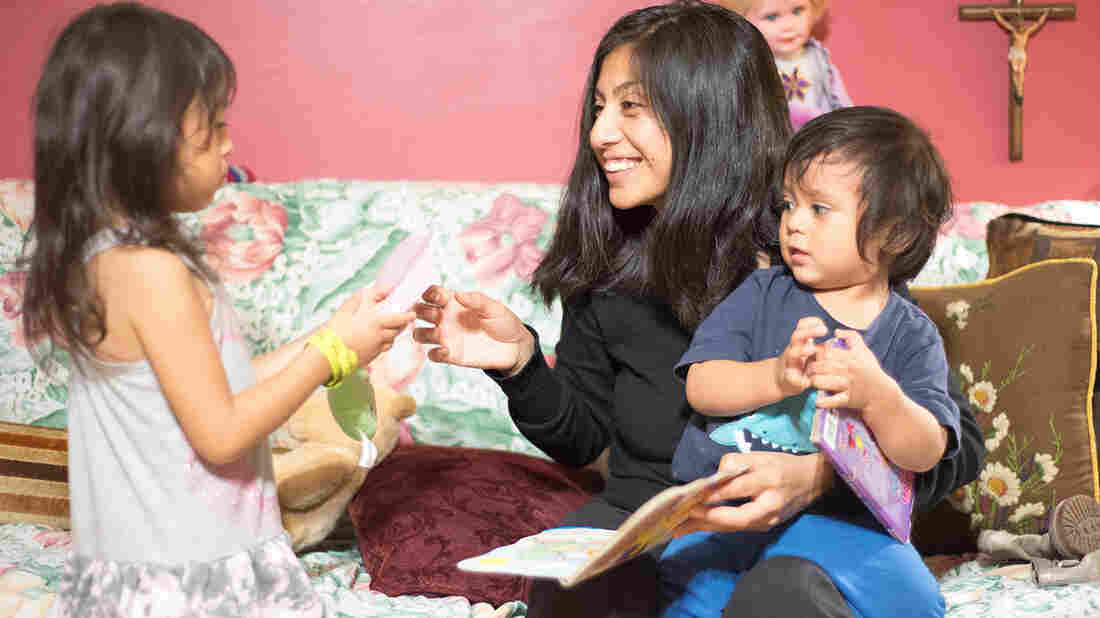 Sara Martín reads bedtime stories with her children. When the kids were younger, she says, staying up to date on their frequent immunizations was tough, because of cost and transportation issues. Lauren M. Whaley/CHCF Center for Health Reporting hide caption 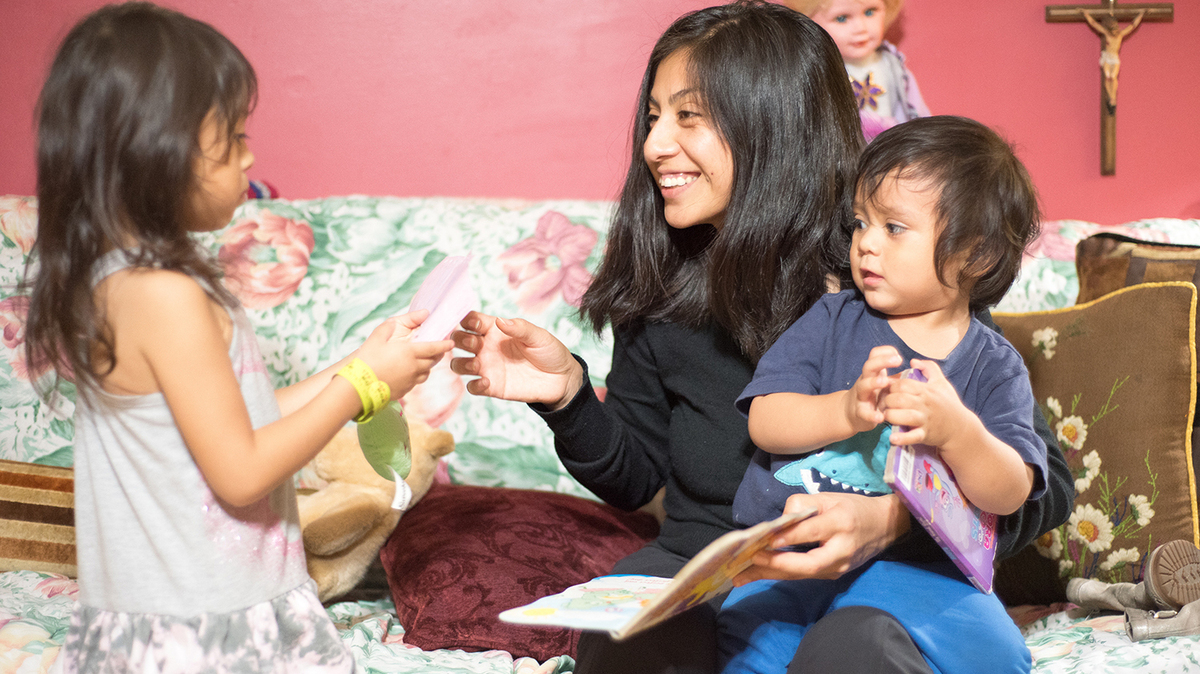 Sara Martín reads bedtime stories with her children. When the kids were younger, she says, staying up to date on their frequent immunizations was tough, because of cost and transportation issues.

When Sara Martín's children were infants, she made sure they got all the recommended immunizations.

"And then somewhere when they became toddlers I started to fall a little behind on the vaccinations," she says. "Not intentionally — just, that's kind of how it happened for me."

Martín is 29 years old and a single mother of two. She says it was a huge chore to travel from her home in East Los Angeles to a community clinic downtown.

"It's not just about paying the fare for the bus — which seems pretty inexpensive, right? Like a dollar and some change," Martin says. It was also a complicated commute. "Maybe two buses there, and two buses back, because it was a long trip."

There was also the challenge, while on food stamps, of feeding the kids throughout that trip.

"I don't want to feel like these are excuses," Martín says. "It was just the reality — these are choices I had to make."

Her kids — 3-year-old Tzintia, and 18-month-old Ricky — eventually got caught up on their shots. There are a lot of children like them who fall behind on their vaccinations simply because the logistics of life get in the way.

California has had at least 103 confirmed cases of measles in the most recent outbreak; the state also experienced a whooping cough epidemic in 2014, with more than 10,000 cases and two infant deaths.

The rise in cases has focused public attention on the state's relatively lenient (and controversial) personal belief exemptions policy, which allows parents to refuse to vaccinate their children.

But experts say under-vaccination may also be a pressing problem.

The state requires kindergartners to have all the recommended immunizations for diphtheria, tetanus and pertussis; measles, mumps and rubella; polio; haemophilus influenza type b; hepatitis B; and chickenpox. For most of these vaccines, full immunization means multiple doses given at specific intervals.

State law allows incoming kindergartners who have received at least one dose of each required vaccine to enroll as what's known as "conditional entrants."

After that, it's up to the school to notify a family when the child's next shot is due. But that follow-up doesn't always happen, says Tonya Ross, a registered nurse and director of nursing services for the Los Angeles Unified School District.

"It's a challenge when, you know, you're busy during the school day, and the days roll by," she says. "And then, three months later you realize you have a student who, you know, you missed notifying them, and the parent forgot."

In a handful of L.A. schools, 60 to 80 percent of incoming kindergartners had not yet completed the full lineup of recommended shots when they enrolled in 2013. The school district says it is unable to report how many of those students ended up fully vaccinated by the end of the school year.

"Once they're in, if there's no nurse there tracking that — it may flag on a system, but there's really no one looking at that," says Ross, citing the lack of school nurses as a barrier for tracking students' immunizations. "So it's very difficult to get those kids the appropriate follow-up."

The state requires schools to report their immunization rates in the fall, but there is no additional reporting requirement (though it randomly audits about 3 percent of kindergartens every third spring). In 2011, the most recent available review, 6 percent of the 286 audited kindergartens were only partially immunized for their initial enrollment; about half of them had received the missing vaccinations by the spring.

The state is not tracking these partially-immunized children, and while state law requires schools to track conditionally-admitted entrants and exclude those who don't get fully vaccinated, schools don't risk any sanctions for failing on either of those fronts.

This issue came as a surprise to L.A. school board member Bennett Kayser. He believes the problem should be easy to solve.

"It shouldn't be difficult to generate a report that says who's needed a booster shot for the longest period of time, and sort the list of students who are still in need of boosters," he says.

The issue also worries Dr. Richard Pan, a pediatrician and state senator (D-Sacramento) who sits on the senate health committee, and who introduced recent legislation that would abolish the personal belief exemption as it pertains to childhood vaccines.

"It certainly is a public health problem, because you have people who are under-vaccinated," says the senator, who plans to introduce more legislation this year to require schools to provide parents with statistics on their students' vaccination status.

The senator says he supports increasing funding for school nurses, so they have the ability to ensure that all kids get vaccinated.

Following up on immunization "is something that's been falling by the wayside," says Pan. "We need to focus on that again."

This story is the result of an NPR collaboration with Southern California Public Radio and Lauren M. Whaley of the California Healthcare Foundation's Center for Health Reporting.