Accessibility links
Playing The Odds With Statins: Heart Disease Or Diabetes? : Shots - Health News Doctors hand out cholesterol-lowering statins like breath mints, but like any drug they come with risks. Less heart disease, sure, a slightly higher risk of diabetes, too. So what's a person to do?

Playing The Odds With Statins: Heart Disease Or Diabetes?

Playing The Odds With Statins: Heart Disease Or Diabetes? 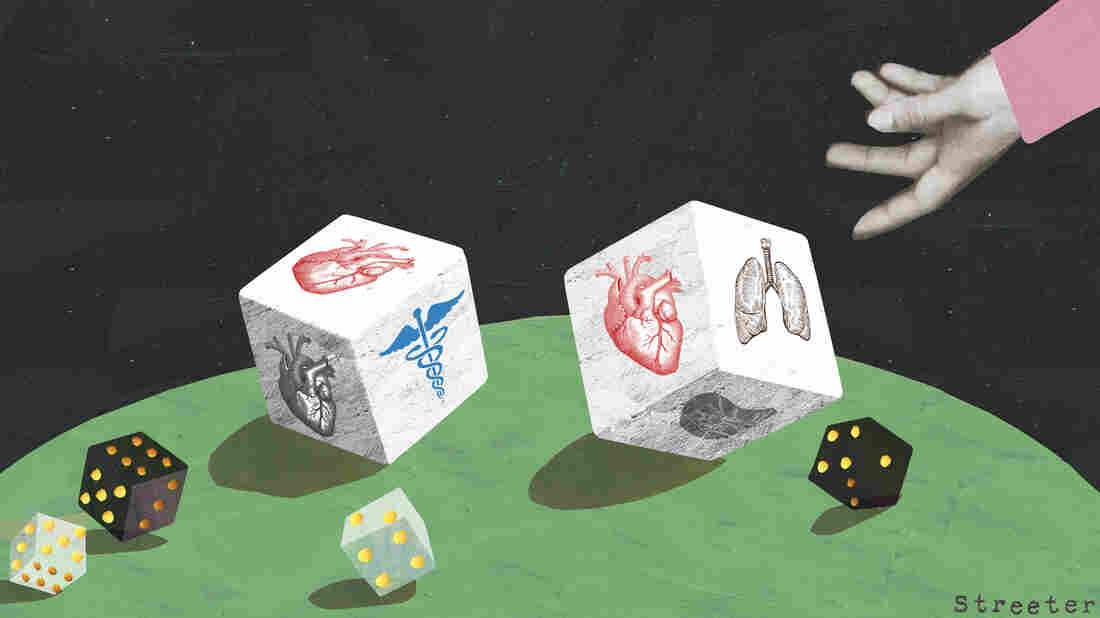 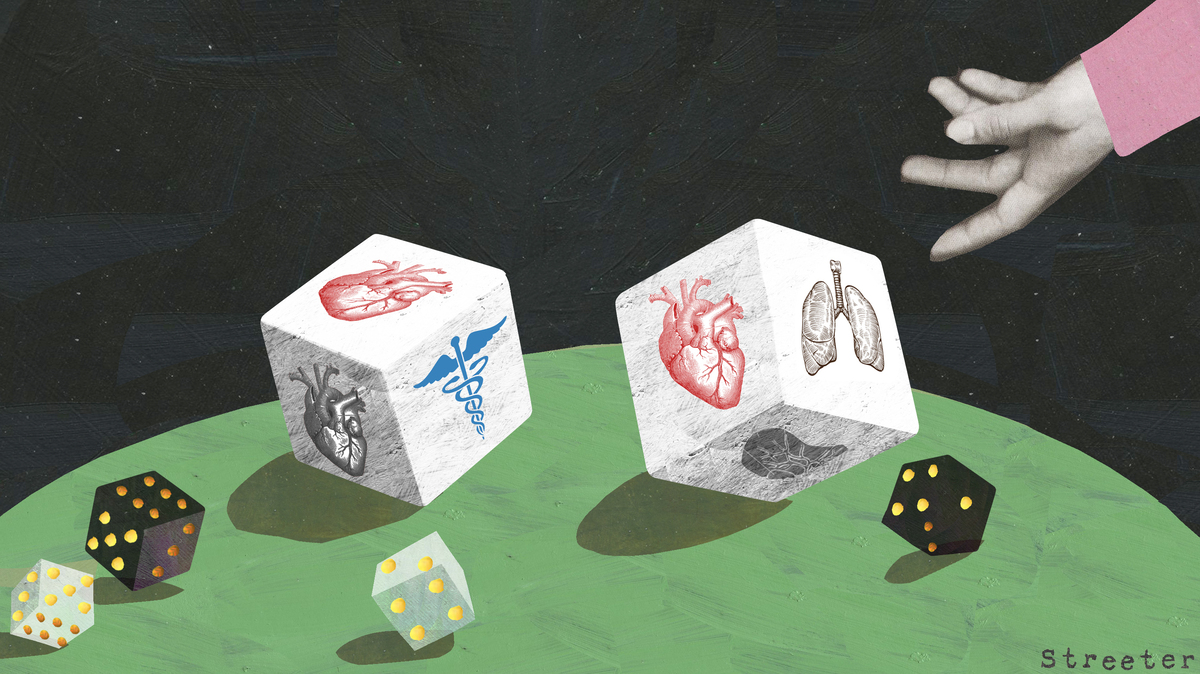 Last year my cholesterol shot up despite living nowhere near a decent barbeque joint. I was totally stressed. I wasn't overweight. But I was pretty sedentary. My doctor prescribed a high dose of Lipitor, a powerful statin.

For women of a certain age, statins are supposedly the best thing since Lycra for keeping wayward bodies in check. Statins interfere with the synthesis of low-density lipoprotein, the "bad" cholesterol. LDL is a prime suspect in heart disease, the top killer of women.

Heart trouble and diabetes run in my family. Was I trading a heart attack for diabetes?

But statins can also increase the risk of developing Type 2 diabetes, muscle and/or liver damage. Heart trouble and diabetes run in my family. Was I trading a heart attack for diabetes?

"We give statins to people with diabetes," was all my doc said.

That didn't answer my question. I knew from an unrelated test that I did not currently have coronary artery disease, so I decided to investigate the statin situation.

In 2012 the Food and Drug Administration slapped a black box warning on statins, saying that they could raise blood glucose levels in people at high risk of Type 2 diabetes. That meant an increase of anywhere from 9 to 27 percent in relative risk – in absolute terms about 0.3 excess cases of diabetes for every 100 people who are treated for a year with high-intensity statins (which lower cholesterol by 50 percent or more) and 0.1 excess cases of diabetes for every 100 people treated with moderate-intensity statins (which lower cholesterol by 30 to 50 percent.)

Because doctors disagree on who should get statins, in 2013 the American College of Cardiology and the American Heart Association issued guidelines advising doctors not to treat to a cholesterol target, but to prescribe statins if patients fit into one of four risk categories and had an estimated 10-year heart disease risk greater than 7.5 percent.

I didn't fit any category, and based on their calculator my 10-year risk of a heart attack was only 2.9 percent. But my father had a heart attack before age 55. That meant medicating was up to my doctor.

Cholesterol Drugs May Raise Risk Of Diabetes A Little

That dumped me right back into the slush pile of uncertainty. Comparing clinical studies was frustrating because populations and measures varied, error margins were squishy and effects were small and murky over large populations.

I hit pay dirt with the Statin Diabetes Safety Task Force 2014 Update, which stated that statins lower the relative risk of heart attack, stroke and death by 25 to 30 percent. They increase diabetes by a relative risk of 10 to 12 percent compared to placebo or usual treatment. So if you are at high risk for diabetes, a statin will get you there faster. Boiled down: one excess case of diabetes in 255 people who took a statin, balanced against 5.4 heart events avoided over an average of 4 years.

Clinicial trials don't give a full picture of risk because they are conducted on a limited population, according to Brian Overstreet, CEO of Adverse Events, a Healdsburg, Calif., data-mining company. Things get far messier in real life. His company cleans up data from FAERS, the FDA Adverse Event Reporting System on consumer-reported side effects, and sells it to health care systems like the one where my doctor practices. In the company's report, out of almost 50,000 consumer-reported complaints of Lipitor side effects, about 4 percent were for diabetes.

For a sanity check, I emailed Dr. Naveed Sattar, a professor of metabolic medicine at the University of Glasgow who writes for Diabetes Update. He tactfully confirmed that my diabetes fears were overblown. Sattar is younger and far fitter than me. He told me that his risk of diabetes is far higher than mine because his immediate family members already have it. But he reassured me that while exercise does not directly lower cholesterol, it helps prevent heart disease in other ways.

Maybe reading all those studies had fanned my incipient hypochondria, but going for a walk was like slogging through mud. Forget running. And my liver was squawking.

After four months on statins, my blood glucose still tested normal, but I was feeling increasingly seedy, wobbly-kneed and weak. Maybe reading all those studies had fanned my incipient hypochondria, but going for a walk was like slogging through mud. Forget running. And my liver was squawking. My liver enzyme level was only a few points above normal, but it had almost tripled since last year.

My husband, an engineer in a semiconductor foundry, observed that that kind of change would shut down the assembly line and require statistical process control. Go for it, I told him.

Using our daughter's pink calculator, The Cartoon Guide to Statistics and study data, we calculated conditional probability scenarios like Las Vegas bookies. Given high cholesterol, my personal probability of getting heart disease in 10 years unmedicated was about 12 percent. Taking a statin, about 10 percent.

So marginal benefit versus a whiff of real side effects; was the statin worth it? I ditched the statin. The weakness evaporated. I could run again.

The correlation between my blood cholesterol level and the chance of getting heart disease was weak, but my personal risk was statistically driven up because 30 percent of American women my age (early 50s) have heart disease.

So marginal benefit versus a whiff of real side effects; was the statin worth it? I ditched the statin. The weakness evaporated. I could run again.

On reflection, maybe the reason I got statins was not medical but economic. My health plan rates its doctors by their efficiency in taming patient numbers. Taking a pill is easy and gets quick results. Regular cardiovascular exercise, repeated blood tests and doctor's visits is more uncertain and expensive.

I finally got in to see my doctor last week. She didn't remember repeatedly insisting that I take the highest dosage of Lipitor, but after I briefly reviewed with her my risks and side effects, based on real research and experience this time, she agreed I could drop the statin.

My victory was in finally figuring out the right questions to ask. I'm still shaken because she had prescribed to formula but not to me as an individual. We both missed things in the risk conversations we should have had. Next time I hope to do better at asking questions like "Why?" and "What happens in people like me?" and "What are the alternatives?"

And of course, "Where can I look this up?"

Wendy Wolfson is a science writer in Orange County, Calif.