Accessibility links
Before The Gas Is Passed, Researchers Aim To Measure It In The Gut : Shots - Health News As people's health waxes or wanes because of stress or disease, their intestinal ecosystems change, too. It may be possible someday to diagnose disease by analyzing the gas the microbes make.

Before The Gas Is Passed, Researchers Aim To Measure It In The Gut

Before The Gas Is Passed, Researchers Aim To Measure It In The Gut

Feces contain digested food residue and a wide variety of microorganisms, mostly bacteria, that are adapted to life in the intestines. The gases the microbes produce could help doctors and scientists track and understand changes related to health. Scimat Scimat/Photo Researchers/Getty Images hide caption

Feces contain digested food residue and a wide variety of microorganisms, mostly bacteria, that are adapted to life in the intestines. The gases the microbes produce could help doctors and scientists track and understand changes related to health.

The jars of fresh poop are instrumental to his research at the Royal Melbourne Institute of Technology in Australia to develop ways to scientifically analyze people's farts, something that the researchers believe could help them more easily track the activity of the human gut microbiome.

Kalantar-Zadeh and his colleagues propose in a paper in Trends in Biotechnology online Thursday two new devices that could keep a vigilant eye, or a nose in this case, on what's going on deep in the gut. He hopes that someday medical doctors could use the devices to diagnose certain gastrointestinal diseases without having to do an invasive procedure like a colonoscopy.

The pill uses a sensor to identify the gas in the gut and beams the information out of the body through a tiny antenna. The pill itself follows a few hours or days later. 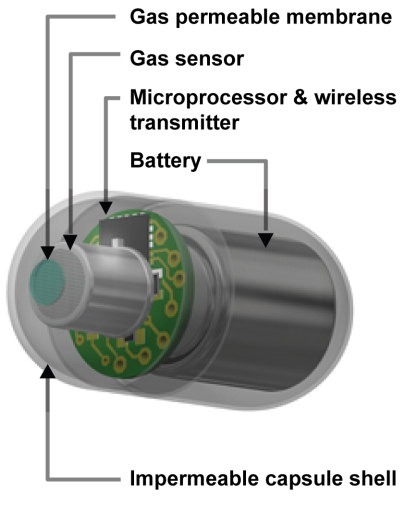 The jar is pretty straightforward. A spoonful of poop goes in and a technician squeezes on a lid containing a sensor that detects the molecules of gas fuming inside and at what concentration. "I love that system," Kalantar-Zadeh says. It's cheap and reusable, but he's most excited about their other invention.

It's a robotic pill that sniffs its way along a craptastic voyage through the gut. As the pill tumbles through, a membrane on the pill lets gasses pass onto a small molecular sensor inside that serves as its nose. The membrane blocks the other stuff sloshing around in the gut.

The pill notes the gasses that gut microbes produce, including oxygen, methane, hydrogen and hydrogen sulfide, which smells like rotten eggs. The pill's sensor figures out how much of each gas is present, and beams the information out of the patient's body through a tiny antenna. The pill itself follows after a few hours or days.

The researchers aim to detect changes in gas content. As people's health waxes or wanes because of stress or disease their intestinal ecosystems change too. Certain microbes may thrive in the new conditions while others struggle. As the populations shift, so will the concentrations of their distinctive gassy waste products. "They're fantastic biomarkers that tell about the state of our health," Kalantar-Zadeh says.

But others aren't quite blown away. "I don't think we know enough about it at this point," says Ilseung Cho, a gastroenterologist at New York University School of Medicine who conducts research on the gut microbiome. "The problem is that you have hundreds of species of bacteria in your gut, and their waste products are all fairly similar."

Cho, who isn't involved in the sensor research, says that changes in methane concentration in people's flatulence have been linked to diseases like irritable bowel syndrome. But it's impossible to tell whether that methane is coming from a disease-causing bacteria or a benign species.

The pill and the sensing jar can't identify the species of bacteria that are present. They only smell the gas. "That's it," Cho says. "That's all the data you have, you don't have any other data to suggest that there's a mechanistic link between this bacteria and that ... gas measurement," Cho says.

Cho says the stool samples are more interesting. By grinding up poop, doctors can run tests that reveal the species of bacteria that are present in the gut and see other bacterial byproducts that aren't gas. But Cho also says that poop contains a mixture of bacteria from each part of the gastrointestinal tract. "We don't know how much comes from the colon versus the small bowel, all the way up to the stomach," he says. The nice thing about the pill is it tests each part of the gut one at a time.

Knowledge about the microbiome's gas could be helpful to patients someday, Cho says, but it will take time. "The field is really young, so there's not much we can bring to the clinical realm right now." He says neither device could be used as a diagnostic tool just yet, unlike the pill camera approved by the Food and Drug Administration as an alternative to endoscopes.

But Cho says people could use them to do research on something like irritable bowel syndrome – maybe. The paper, he's quick to add, is just a concept at this point — not a presentation of results from actual experiments.

The data are coming, Kalantar-Zadeh says. His team already has the jars running with human feces and is testing if there's a link between gas and human health in those. "One of the samples is actually myself," he says. "The results are amazing." They're getting ready to start testing the pill in humans as well, and the intrepid engineer is hungry to try one himself.