Accessibility links
Feds Knew About Medicare Advantage Overcharges Years Ago : Shots - Health News An unpublished government study from 2009 sounded alarm bells about the risk formula used to pay privately run Medicare insurance plans. Since then billions of dollars in waste have been documented. 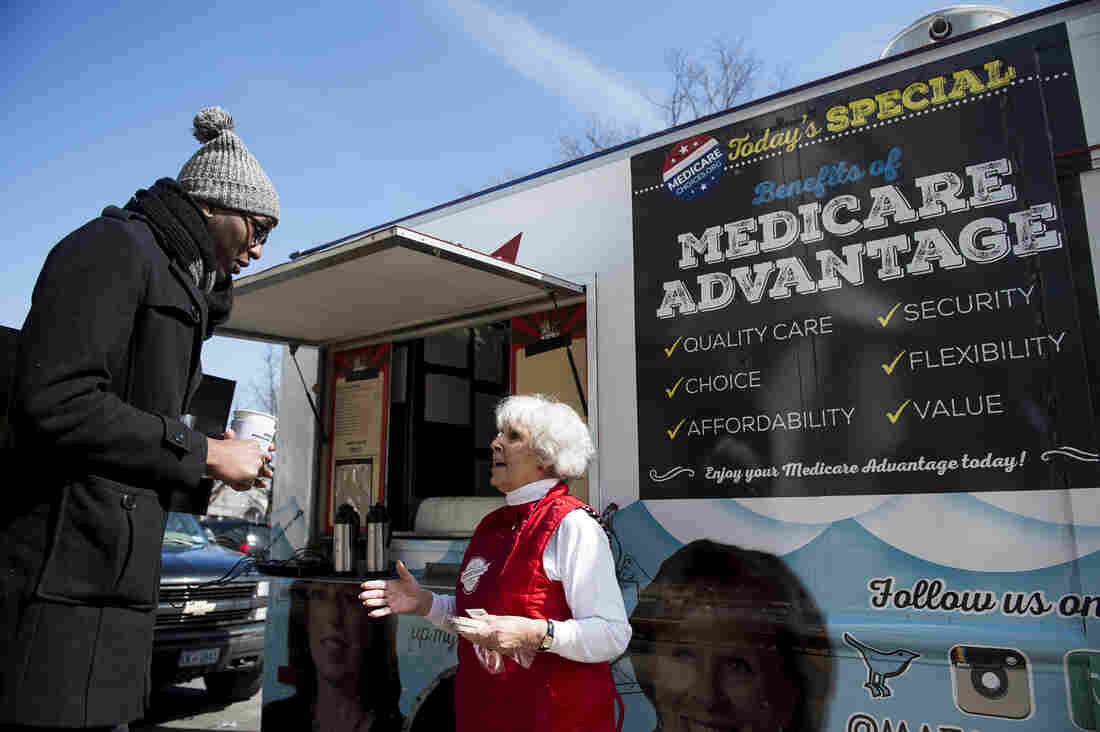 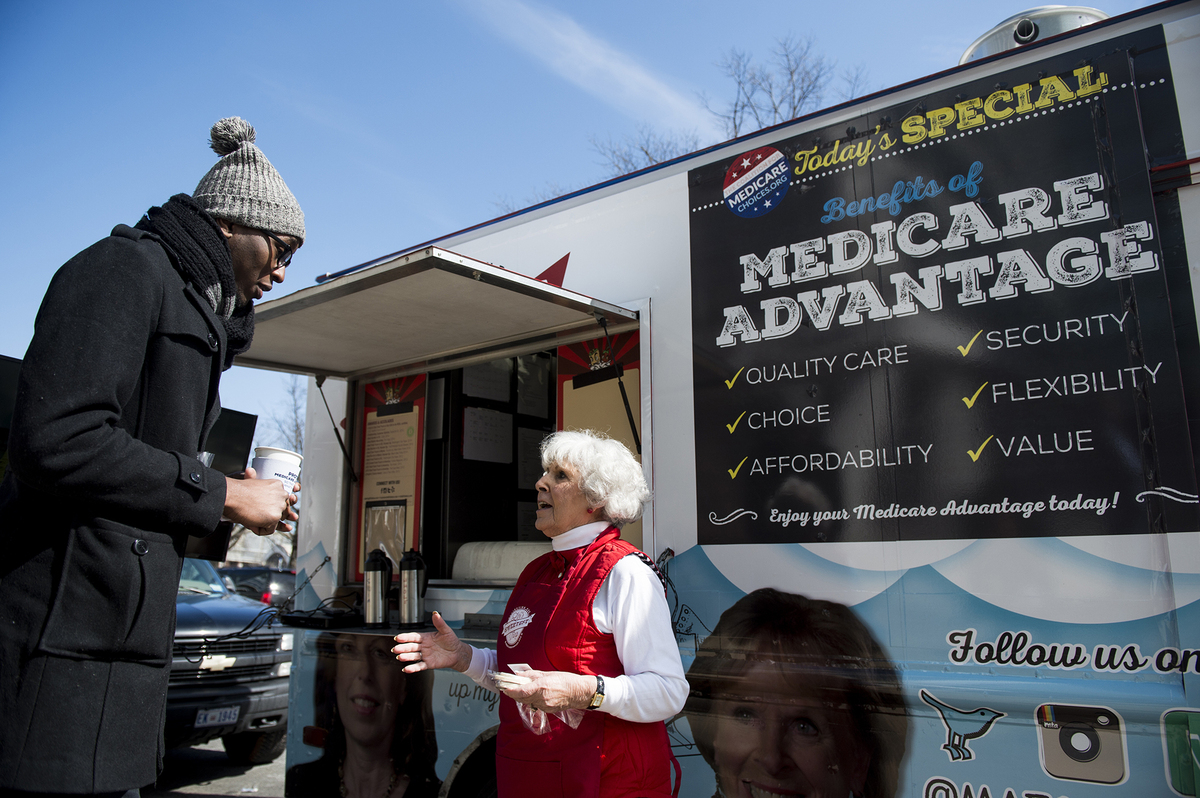 Privately run Medicare Advantage plans offer an alternative to standard Medicare, which pays doctors for each service they render. Under Medicare Advantage, the federal government pays the private health plans a set monthly fee for each patient based on a formula known as a risk score, which is supposed to measure the state of their health. Sicker patients merit higher rates than those in good health.

The program is a good fit for many seniors. Some 16 million people have signed up — about a third of people eligible for Medicare — and more are expected to follow. Supporters argue that Medicare Advantage improves care while costing members less out of pocket than standard Medicare. The Medicare Advantage industry is lobbying hard to block budget cuts sought by the Obama administration.

Medicare Advantage plans are "clearly an important force to be reckoned with when it comes to making public policy," said Dr. Robert Berenson, a former government health official, who is now at the Urban Institute.

But overspending tied to rising risk scores has cost taxpayers billions of dollars in recent years, as the Center for Public Integrity reported in a series of articles published last year. And concerns that some health plans overstate how sick their patients are date back years, according to records recently released to the Center for Public Integrity under the Freedom of Information Act.

The documents include an unpublished study commissioned by the agency that runs Medicare and the Centers for Medicare and Medicaid Services, and dated Sept. 29, 2009; the study tracked growth in risk scores starting in 2004, the year after Congress created the billing tool.

The study found that risk scores for Medicare Advantage enrollees grew twice as fast between 2004 and 2008 as they would have had the same person remained in standard Medicare. The study said it was "extremely unlikely" that people who enrolled in the plans actually got sicker and noted that coding inflation "results in inappropriate payment levels."

The lead author was Richard Kronick, then a researcher at the University of California, San Diego. Kronick now heads the federal Agency for Healthcare Research and Quality, a research arm of the Department of Health and Human Services. He had no comment. Other authors listed included three CMS employees.

A CMS spokesman said on Thursday that the agency sought to publish the findings on a government run research site, but was told it needed to be "substantially shortened" to be considered. "Given competing workload demands we were not able to revise and resubmit the article," the official said in a statement.

The study cited diabetes as an example of the billing problem.

The authors noted that "a number of companies have successfully marketed services to help MA plans increase their risk scores." They also said that the problem was worsening over time.

The study said that a number of large Medicare health plans, which were not named, raised risk scores far above their peers. But the agency chose not to ferret out the worst offenders and discipline them. Instead CMS cut rates industrywide in 2010 by 3.41 percent to offset the jump in risk scores.

Berenson, of the Urban Institute, said cutting rates across the board was a kind of "rough justice."

"It seems to me that they need to identify the plans that are bending the rules," Berenson said. "It's not so easy to focus in on plans that are overly aggressive [in billing]," he said.

Medicare Advantage plans are currently mounting an aggressive lobbying effort to stave off proposed new federal budget cuts. Fifty-three senators signed a recent letter opposing the cuts. The Coalition for Medicare Choices, run by the health insurance industry, even rolled out a "Medicare Advantage"-themed food truck that parceled out free cookies and coffee near the U.S. Capitol. Utah Sen. Orrin Hatch was among those who stopped by.

Separately, an advocacy group called the Better Medicare Alliance on March 10 unveiled a pair of advertisements arguing any cuts would cause seniors to pay more for their medical care.

Clare Krusing, a spokeswoman for America's Health Insurance Plans, said in a statement:

"Seniors enrolled in Medicare Advantage have already faced year-over-year cuts to the coverage they rely on. Now, CMS is proposing another cut at a time when beneficiaries, policymakers, providers are all calling for stability in the program. Preventing any further cuts to Medicare Advantage will ensure seniors can continue to rely on this critical lifeline."

Though Medicare Advantage has built formidable support in Congress, the risk-based payment system has critics in other areas of government.

Earlier this week, the Government Accountability Office, the audit arm of Congress, cited more than $12 billion in improper payments to Medicare Advantage plans among a total of nearly $60 billion in misspent Medicare funds for 2014. A broader GAO audit of how well federal officials have monitored the industry to curb overbilling is underway; it's due to be released later this year.

The industry has a good track record when it comes to building the political support to silence its critics. For instance, an ad campaign run by the industry in 2013 turned a proposed 2 percent cut in rates into a 3 percent rate hike. In backing down, CMS officials said the revised rates would give patients "more value in the care they receive and greater protections against increasing costs."

President Obama's proposed 2016 budget seeks more than $36 billion in Medicare Advantage cuts over the next decade, mainly by taking aim at risk scoring.

A final decision on the payment rates for 2016 is due in April.

This piece comes from the Center for Public Integrity, a nonpartisan, nonprofit investigative news organization. For more, follow the center on Twitter @Publici, or sign up for its newsletter.