Accessibility links
Puberty Suppression Now A Choice For Teens On Medicaid In Oregon : Shots - Health News Medicaid in Oregon now pays for medication to suppress puberty in teens who may want to change their gender. Oregon officials decided the benefits outweigh possible trade-offs of stopping puberty. 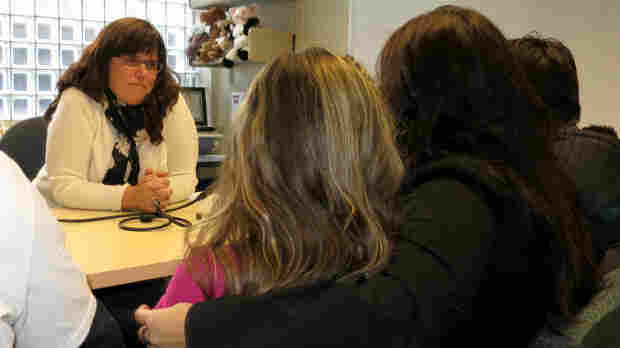 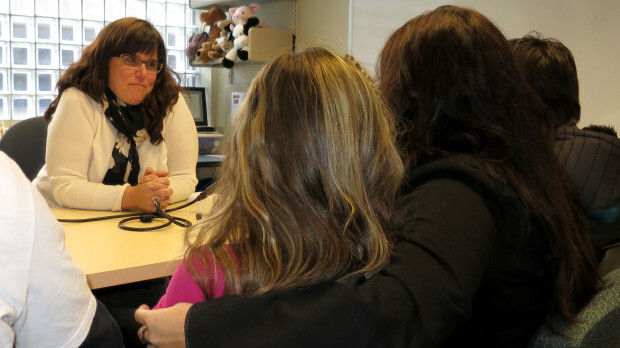 Michaela leans on her mother, Dee, while talking to Dr. Karin Selva about puberty suppression.

Michael was born biologically male 13 years ago on the Grand Ronde Indian Reservation.

Mom, Dee, remembers buying dresses for three nieces when Michael — who now goes by Michaela — was about 6 years old.

To protect her privacy, NPR has agreed not to use Michaela or her mother's real names. That's because some kids didn't respond well when Michaela turned 7 and started experimenting with a more feminine lifestyle and clothes.

Oregon began covering the cost of puberty suppression for transgender people on Medicaid in January. It also covers things like hormone therapy and reassignment surgery.

"She wouldn't wear her pink and purple to school anymore like she used to," Dee says. "She was starting to get teased, which was way too hard for me to take."

Michaela says friends of her older brother Ray teased her.

The family decided to move to Portland when Michaela was 8 so she could live as a girl and attend a school where nobody knew any different.

When she hit puberty at 12, she turned to Karin Selva, a pediatric endocrinologist with Randall Children's Hospital in Portland.

"Any boy who wants to look like a girl can just grow your hair long and put some mascara on, put a dress on and they'll look very female," she says. "But as soon as puberty hits, that's when the body pretty much turns on someone who is transgender."

Michaela wants to transition from male to female — meaning she doesn't want to grow an Adam's apple, facial hair or a heavy male body structure. To stop that process, she now gets an injection once every three months,

Michaela has private insurance. But the medication she gets, which Medicaid in Oregon now covers, is Lupron. It costs about $7,500 for three months. A few states now cover the cost of medical treatment for people who are transgender but Oregon is one of the few that pays for drugs that suppress puberty in children who think they might want to change their gender.

Lupron has been used for years on children with precocious puberty — that is, children who start puberty too early. It's also used to treat prostate cancer and fibroid tumors. The state estimates that about 175 people will use some kind of transgender treatment under the Oregon Health Plan this year, but it doesn't have figures on how many of those people might be seeking puberty suppression.

Selva says it just gives a child more time to come to a decision about their gender identity. And once they've decided, they can start taking the hormones for the gender they'd like to be — or they can stop taking the medication and allow their body to develop unhindered.

Dutch researchers, in a study published in the journal Pediatrics, found that puberty suppression gave transgender youth "the opportunity to develop into well-functioning young adults."

But, says Dr. Megan Bird with Legacy Medical Group in Portland, there are side effects.

"The biggest risk that we talk about is bone deposition," she says.

There's no evidence puberty suppression increases the risk of osteoporosis in later life, but there isn't much research either, and she says there are other concerns too.

"Kids who first start Lupron get headaches and hot flushes sometimes, but those are usually only for a few weeks, and then they go away," she says. "Other issues is that they're out of synch with their peers. So if you delay a kid at 12, and their peers are developing breasts and they're a late bloomer in that sense, that can be disruptive to their life as well."

Teens who completely suppress puberty are also likely to be sterile, but Bird says it's now possible to undergo a temporary puberty. It can last for just long enough to harvest sperm or eggs for later use, but not so long that a teen begins to grow sexual features, like breasts or an Adam's apple.

Dr. Ariel Smits is the medical director of the group that recommended Medicaid pay for transgender treatments in Oregon. She supported it because, she says, the medical literature is clear: hormone therapy, surgeries and puberty suppression help people live happier lives.

"People with gender dysphoria that did not receive treatment had a much higher rate of hospitalizations or ER visits or doctors visits for depression and anxiety, and they had a pretty significantly high suicide rate. Some studies found about 30 percent," she says.

When people get treatment, she says, those rates drop to a level much closer to that of the general population.