Accessibility links
Couples Counseling Catches On With Tech Co-Founders : Shots - Health News Friction between close business partners is the reason many startups fail. But increasingly in Silicon Valley, co-founders of companies are turning to therapists before things go south. 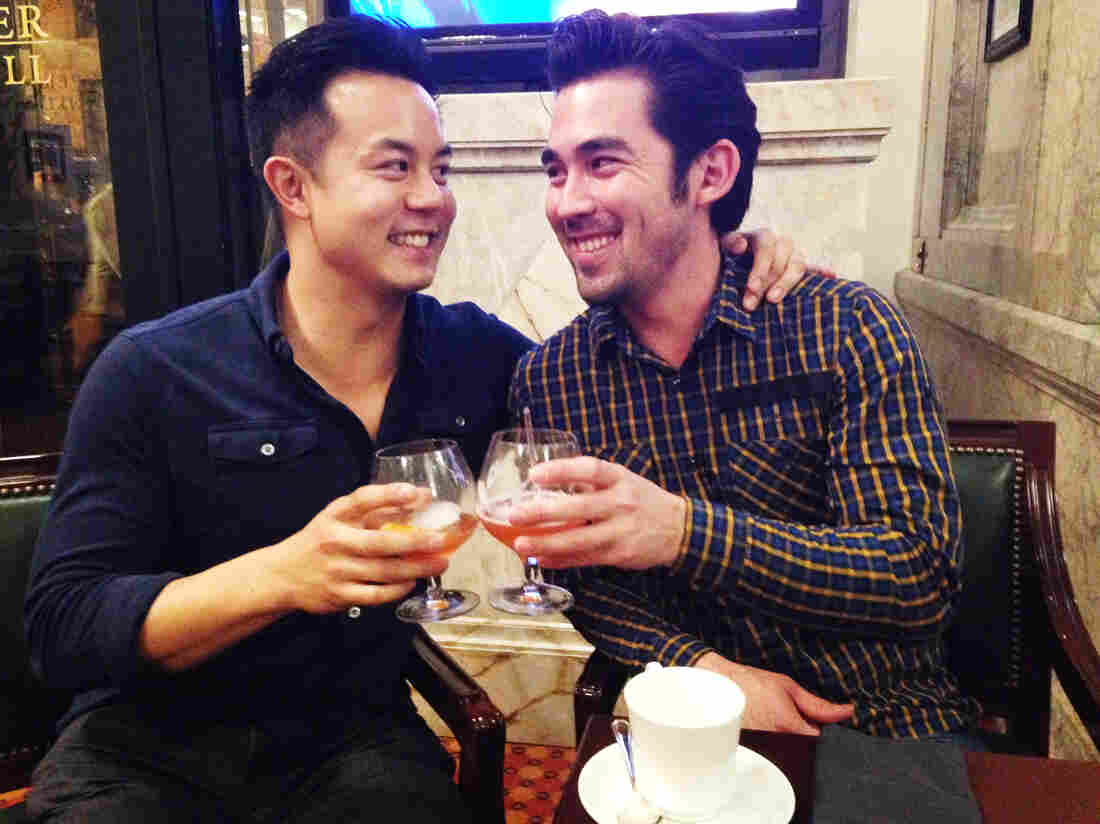 Work partners Jon Chintanaroad (left) and Mike Prestano are all smiles now, but founding a tech startup together threatened their friendship — and their business. April Dembosky/KQED hide caption 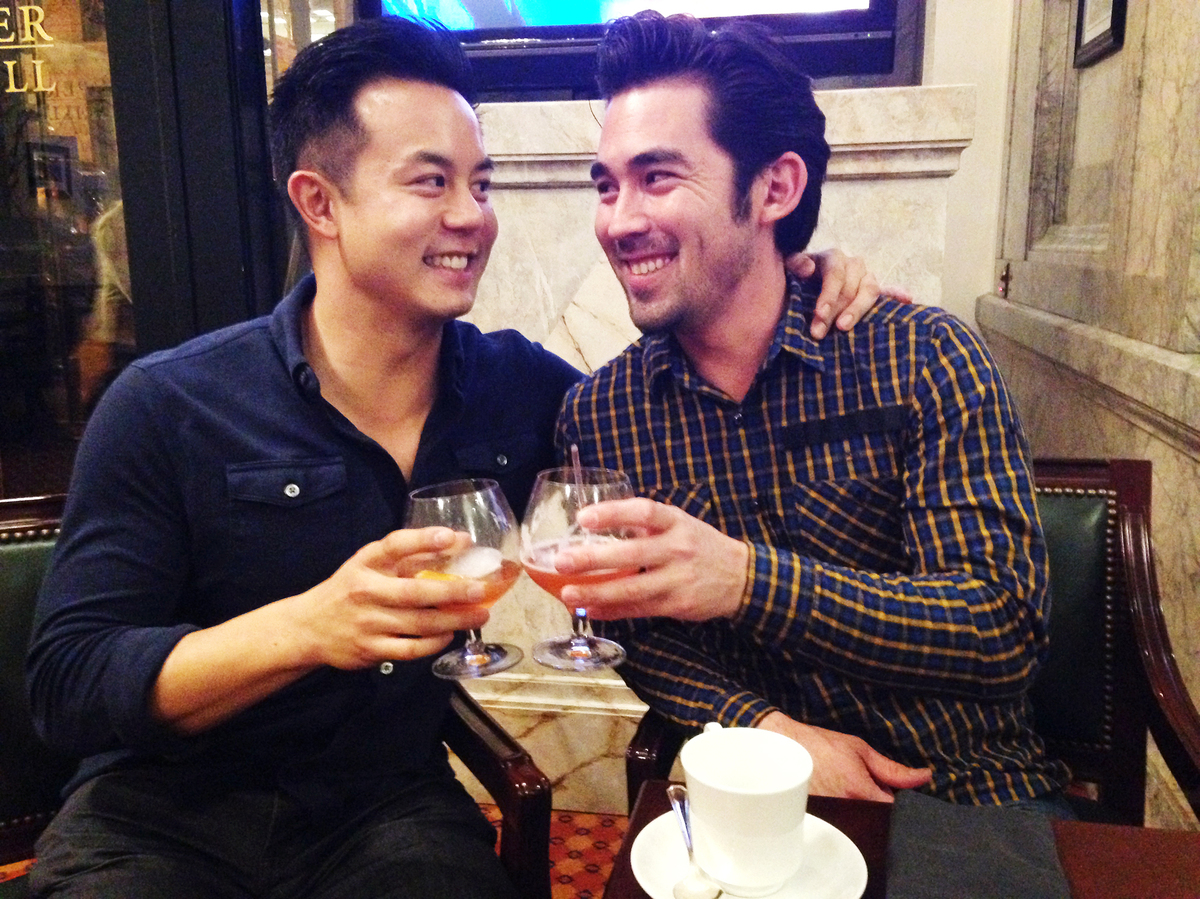 Work partners Jon Chintanaroad (left) and Mike Prestano are all smiles now, but founding a tech startup together threatened their friendship — and their business.

Startups fail for a lot of reasons: bad product, wrong timing. But sometimes, it's just you.

Relationship problems between co-founders are among the biggest reasons companies don't make it. Increasingly in Silicon Valley, business partners are looking for help before things go downhill — they're signing up for couples counseling.

"It's good to do this work while it's actually unfolding in the organizations, and set these things right before they go horribly wrong."

"It felt like a marriage," Jon Chintanaroad says of his business partnership with his friend, Mike Prestano. They launched a tech recruiting startup, Aspire Recruiting, in 2013.

The two were friends for four years before they went into business together. Chintanaroad says their work styles really complemented one another.

"I'm very transactional-based," Chintanaroad says. "I'm kind of a Type-A personality — I just want to get it done, whereas Mike will listen to their whole life story and really cultivate that relationship. When we had both, we started to win over new clients and things went from there."

The business took off right away, and the money came rolling in. But a year into it, they hit some rough patches. They missed some key customer acquisitions. Revenues dipped.

The Spirit Of Innovation

That's when their differences became less complementary and more problematic.

Prestano says they worried the business problems were starting to threaten their friendship.

"I think we both agree ... no matter what happens with the business," Prestano says, "if we keep doing it, or it stops, we still keep our friendship."

They decided to try couples counseling — though most therapists who work with co-founders call it "partnership coaching."

It's something more and more startup founders are doing. Jonathan Horowitz is a psychologist with offices in San Francisco and San Mateo. He says the number of requests he gets for co-founder counseling has doubled in the last year. A lot of times, people call when things have already gotten really ugly.

"The company's dead, something went horribly wrong in the relationship, and they're picking up the pieces afterwards," Horowitz says.

Many startups, especially in the tech industry, are founded by young guys — friends who met in college, got an apartment together and started working on their laptops around-the-clock to get a business off the ground. When things go well, co-founders can suddenly find themselves in complicated business situations with a lot of money — and power — on the line. They have to decide who's going to be CEO. They have to answer to investors. These pressures test the relationship.

Most of the time, it's usually lawyers who get called in to mediate heated disputes or to force one of the founders out of the company. Or to help the partners declare bankruptcy, if the business failed.

"It's good to do this work while it's actually unfolding in the organizations," Horowitz says, "and set these things right before they go horribly wrong."

He says in a lot of business partnerships, there's often one founder who is more dominant, even domineering. "You have the other founder who might not feel like they're being heard or respected. An imbalance like that can be insidious."

In cases like that, good ideas get dismissed; opportunities are lost. Horowitz says his job is to help build trust, communication and empathy.

"All those things are important if you're going to run a business with someone for years and years," he says, "just like [in] a marriage."

It's not just startups that have picked up on the idea. Couples counselors say larger companies like Cisco and Google have hired them to work with managers who aren't getting along. Stanford Business School offers a group therapy course, where required reading includes The Seven Principles for Making Marriage Work. The students call it the "touchy-feely" class.

For Jon Chintanaroad and Mike Prestano, a few sessions with a therapist made them both feel like they had permission to talk about their feelings.

"I think, overall, it resulted in both of us being more aware as people, and balanced," Chintanaroad says.

Chintanaroad worked on listening more. Prestano learned when to speak up if something was bothering him.

"Those things that were bottling up, I talked to Jon about it, expressed how I feel, and he took no offense," Prestano says. "And, actually, he's shown some compassion."

Their tech recruiting business is back on track — and that leaves more energy for social recruiting. After a couple drinks on Friday, Chintanaroad asks Prestano to help him scout for a new girlfriend.

"He can be my wingman," Chintanaroad says.

The sales psychology they use at the office, Prestano says, works just as well at the bar.