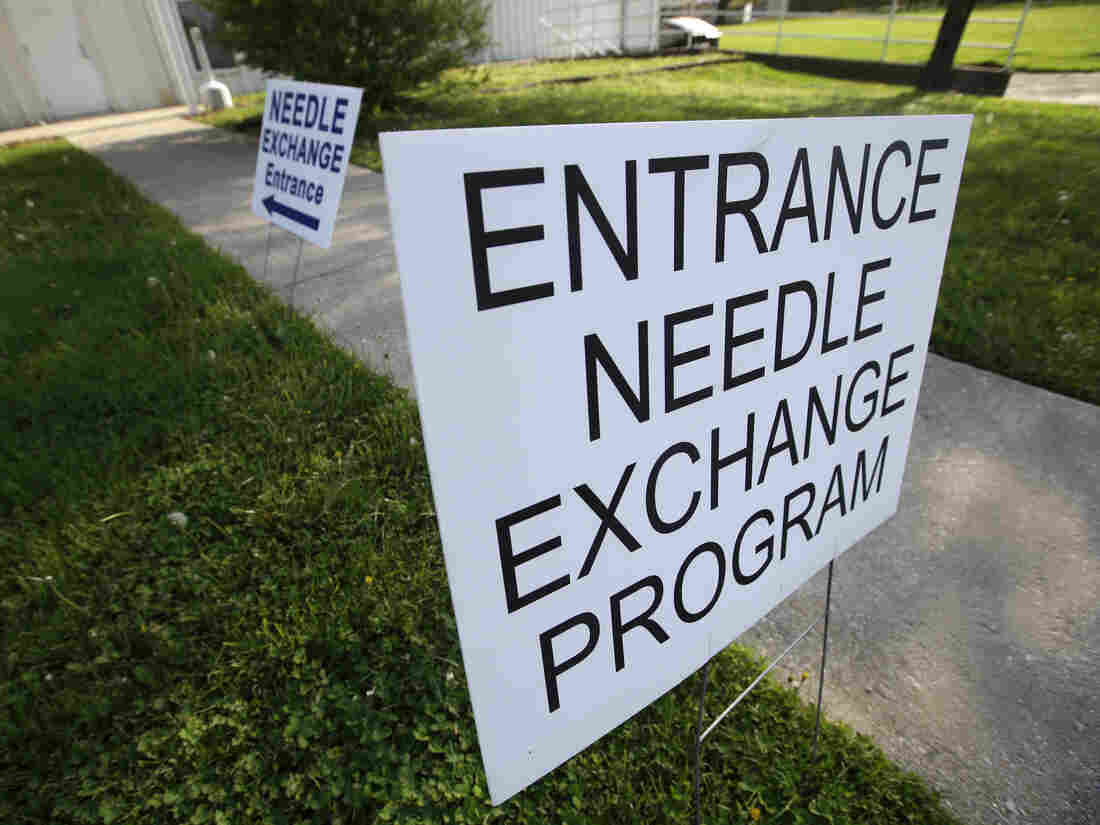 Austin, Indiana's needle exchange program is open for business this week, but health workers worry the program will be tough to quickly replicate in other counties. Darron Cummings/AP hide caption 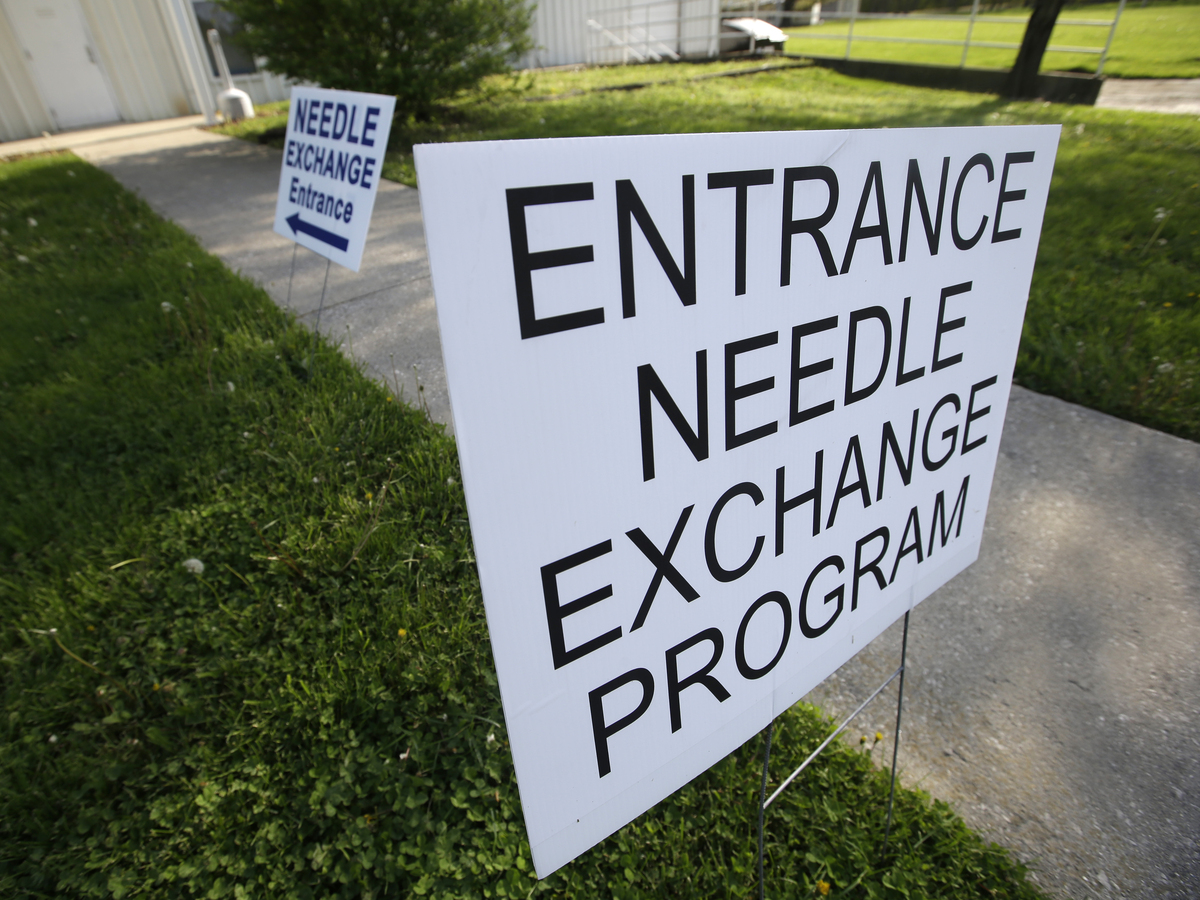 Austin, Indiana's needle exchange program is open for business this week, but health workers worry the program will be tough to quickly replicate in other counties.

In hopes of quelling an HIV outbreak in rural Indiana, the state's legislature this week voted to let any county that can prove it is experiencing a drug-linked outbreak of HIV or Hepatitis C to set up a needle exchange program. Indiana's governor, Mike Pence, says he is "looking forward to signing it into law."

But critics say the measure that passed Wednesday is watered down, and too limited. It also includes so much red tape that counties may have a tough time complying.

"It costs a lot of money to set up a clinic and provide services to that population. Getting messages out to the right people is always the challenge."

Any county or city in the state that wants to set up a needle exchange will have to meet these standards:

A municipality that meets those requirements must then do this:

If the state health commissioner grants that request, the municipality must annually register the program with the state and have a licensed professional, such as a physician, oversee the program.

In effect, critics of the legislation say, only a handful of communities in Indiana are likely to be able to cut through the red tape to launch the sort of programs that federal health officials say are important to stopping the outbreak's spread.

So far, more than 140 people in southeast Indiana's Scott County and neighboring Jackson County have tested positive for HIV. Clyde Polly's son Kevin, in the town of Austin, is one of those people.

Here's what happened, as Clyde Polly sees it: Austin, he explains, "is a town where there's always a lot of drug activity, unfortunately. A lot of people have problems. A lot of people struggle to make ends meet."

Clyde says Kevin had an addiction problem for a long time. He's now in rehab because he got hooked on the prescription painkiller Opana. When taken orally, these opioid pills provide pain relief. But, when ground up and injected, Opana can provide an almost instant feeling of euphoria, say people who use it that way.

"They do it three and four and five times a day," Clyde Polly says. "They can't do it just one time a day. They do the thing one time, and then a little bit later, they'll be looking for another dose."

A few weeks ago, Kevin Polly learned he has HIV, which he likely picked up from sharing a needle with someone already infected.

The outbreak has brought so much unwelcome attention to this town of about 5,000 residents, that Austin officials now tend to answer questions only during a weekly news conference.

Austin's police chief, Donald Spicer, says opioid drug abuse has long been a problem in the community, and his department is overwhelmed.

"According to federal statistics, we have about half the personnel we should have," Spicer says, "and of course that makes your job twice as hard."

Dr. Jonathan Mermin, who heads the CDC's center for HIV/AIDS prevention, says this outbreak is unusual because it's primarily spreading through the sharing of dirty needles.

"This is the first outbreak of HIV among injection drug users injecting an oral opioid in a rural community in recent years," Mermin says.

In March, the governor's office declared a public health emergency in Scott County, allowing for a temporary exchange to be set up there that would allow addicts to get enough clean needles for a week, and then trade them in for new ones. Legislators considered drafting a bill that would expand the needle exchange statewide, mirroring programs that exist in Indiana's neighboring states.

But the bill was controversial; after the final version passed late Wednesday night — 80 to 19 in the Indiana House and 38 to 11 in the state Senate — some people on both sides questioned whether it would be enough to stop the spread of disease.

Lin Montgomery, public health coordinator for Jackson County, says that right now she doesn't even have the funding or staff to test people for HIV.

"It costs a lot of money to set up a clinic and provide services to that population," Montgomery says. "Getting messages out to the right people is always the challenge."

Even as the state expands testing services and needle exchange programs, that alone won't get at the drug problem, says Beth Meyerson, with the Rural Center for HIV/STD Prevention. She wants legislators to go further.

"When the house burns down," Meyerson says, "it's not just time to go out and buy smoke alarms. It's time to ask ourselves, how did this happen? How did we let this happen? What do we need to be and, by the way, how's the rest of the neighborhood?"

But those in charge in Indiana are still at odds over just what that long-term response will look like in small towns like Austin — where there's often only one doctor, and little access to mental health care or substance abuse treatment.

That will have to change, state health officials say. Residents are wondering if it will.