Accessibility links
Staffing An Intensive Care Unit From Miles Away Has Advantages : Shots - Health News Some hospitals are using a remote command center to keep an eye on ICU patients. This brings the expertise of a major medical center to rural hospitals — and may help keep the rural centers open. 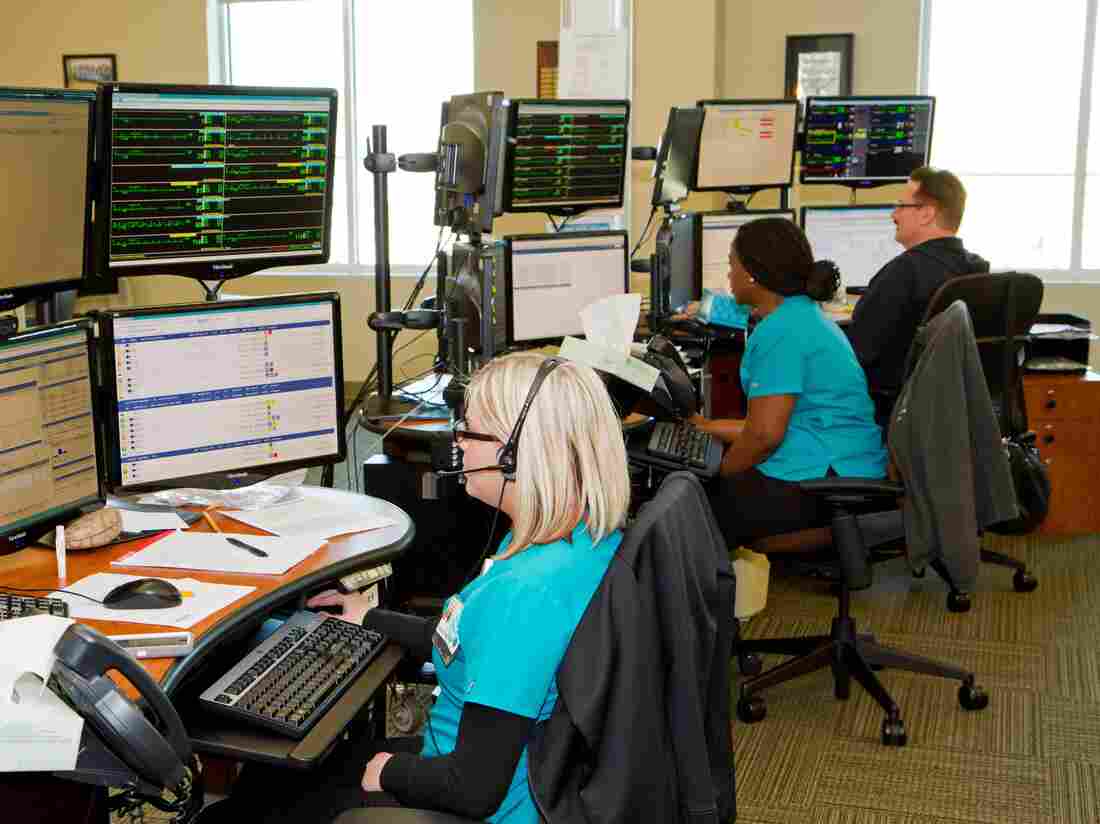 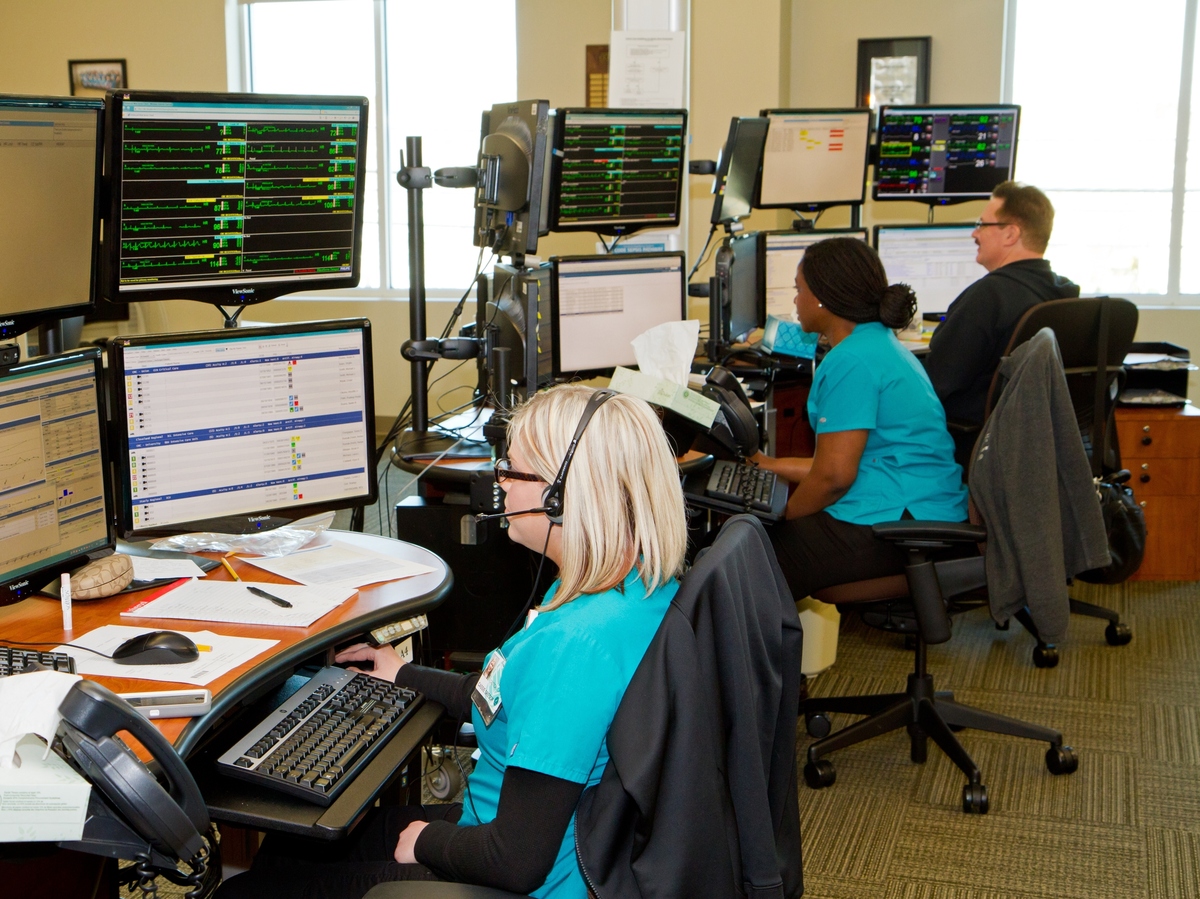 Recovering from pneumonia is an unusual experience in the 10-bed intensive care unit at the Carolinas HealthCare System hospital in rural Lincolnton, N.C. 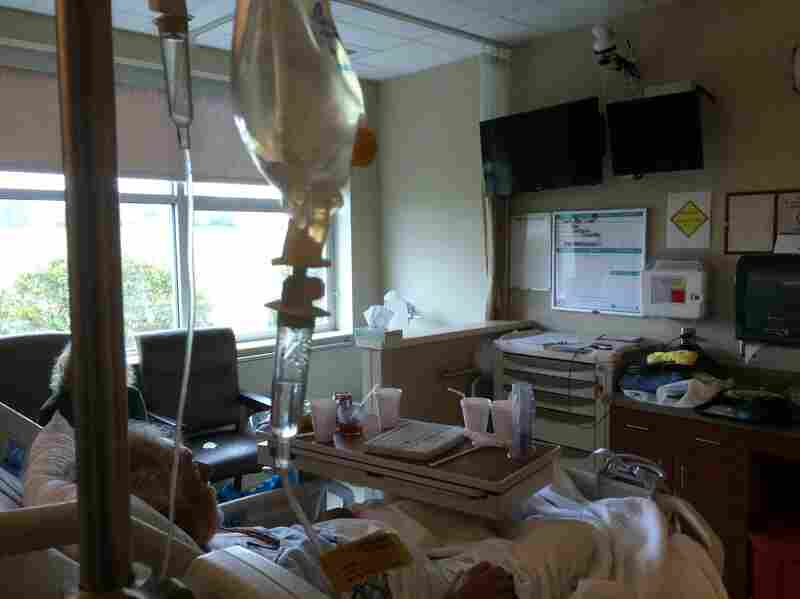 One of the screens in Richard Gilbert's hospital room is a TV. The other is an eICU screen, which lets him see and converse with an extra nurse who checks on his care. Michael Tomsic/WFAE hide caption 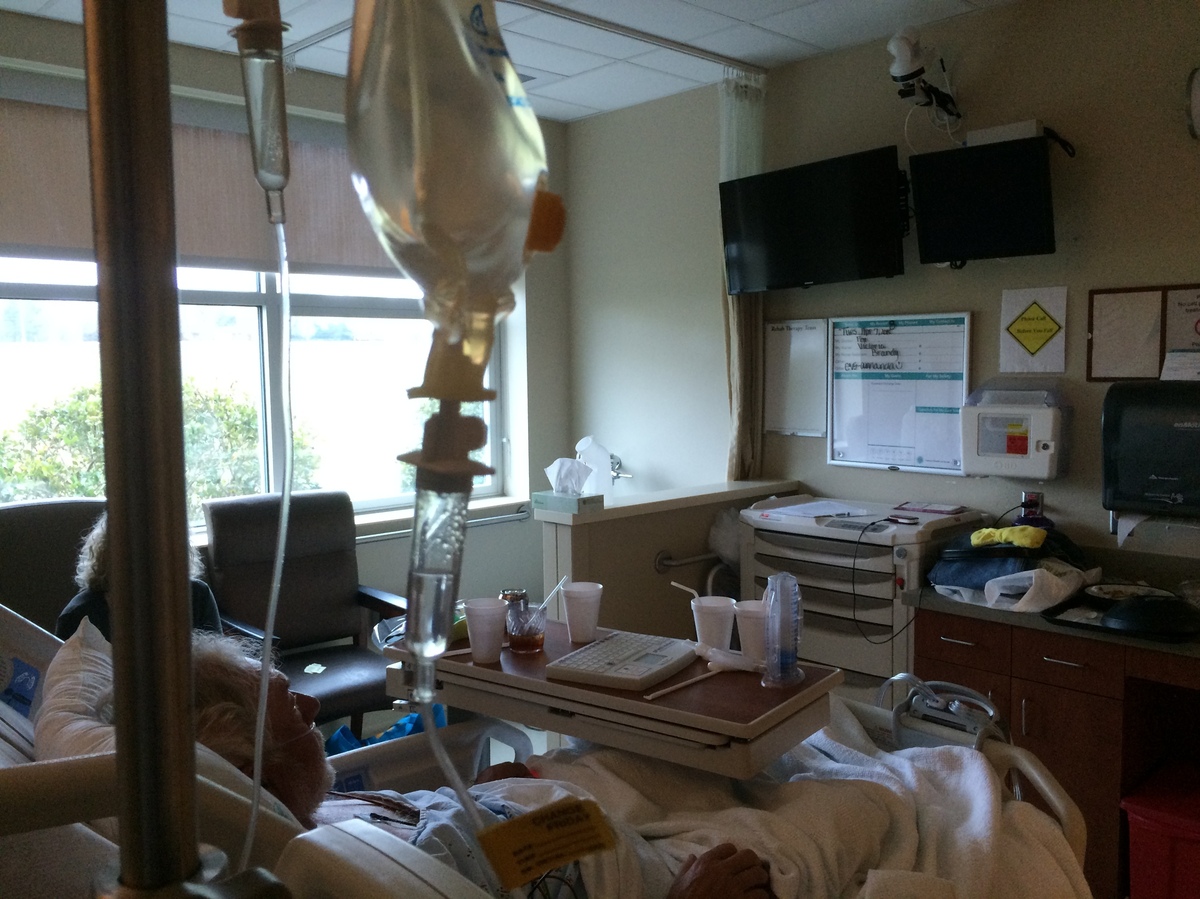 One of the screens in Richard Gilbert's hospital room is a TV. The other is an eICU screen, which lets him see and converse with an extra nurse who checks on his care.

The small hospital has its regular staff, but Richard Gilbert, one of the ICU patients, has an extra nurse who is 45 miles away. That nurse, Cassie Gregor, sits in front of six computer screens in an office building. She wears a headset and comes into Gilbert's room via a computer screen.

A doorbell goes off before the camera turns on, to alert Gilbert that the nurse is looking in. They chitchat as Gregor monitors Gilbert's vital signs, asks how he's feeling and if there's anything he needs.

Carolinas HealthCare System monitors ICUs in 10 of its hospitals from this command center near Charlotte. There are usually seven to nine critical care specialists on hand in the center. Nurses are here around the clock; doctors work nights, and everyone still spends time at the actual hospitals.

Carolinas HealthCare started this project about two years ago and says it's good for staff and patients.

For one thing, because medical staff at the command center can maintain a constant focus on patients, the command center is quiet — none of the bells and whistles going off that most ICUs need to alert nurses and doctors down the hall that they're needed. Dr. Scott Lindblom says it's a nice change of pace.

The peace, he says, "makes it a much more pleasant environment actually to work in than what we're used to — the usual chaos of the ICU."

Qiana Gadson, a nurse at the command center, says the approach has advantages for patient care, too.

"If you were off yesterday as a bedside nurse, and you're on today, you don't have the picture from yesterday," she continues. But the command center staff has easy access to the data on the computer screen, she says, so it's easy to give the bedside staff a heads-up.

Lindblom oversees critical care for Carolinas HealthCare System and says there are clear signs the virtual ICU is working.

"We're taking care of more patients than we were two years ago," he says, "and across the system, our mortality rate is dropping ... and our length of stay is dropping. It's almost the perfect storm of good care."

In Rural Virginia, Truckers Can Stop For Coffee And A Physical

Among the 10 hospitals in the program, ICU mortality is down 5 percent and length of stay is down 6 percent. Lindblom says virtual care doesn't get all the credit. He notes the hospitals have also rolled out a program to better manage sepsis, which is a leading cause of death. But, he says, virtual care helps with that program and nearly everything else in the ICU.

Leah Binder is president of The Leapfrog Group, a national advocate for better hospital care. She said the gold standard is to have critical care doctors on-site, not on-camera.

"However, that's not always possible for every hospital and particularly in rural areas," Binder says, "so second to that is a virtual environment."

As technology leads to better care, she says, it could also lead to lower costs.

In the Midwest, Avera Health estimates its virtual ICU has resulted in $70 million worth of savings over the past 10 years. Deanna Larson, who oversees the project for Avera, says that from one hub in South Dakota, Avera monitors patients as far away as Minnesota and Wyoming.

"I think we quit calculating miles a while back," she says, and laughs. "It's a very vast area of land."

Before virtual care, Larson says, complicated cases were often transferred to major medical centers. Now some of those patients can stay closer to home, and that's good for them, their families and the town's economy.

"Keeping 10 or 12 patients more ... means another nursing job that stays local," Larson says, "maybe another lab tech job. What the technology is really doing is keeping those economics closer to home and helping them maintain viability."

In Lincolnton, Dr. Jessica Fox said her ICU has been much busier.

From his ICU bed, lifelong farmer Gilbert says the more people looking after him, the better.

"That's sort of like me and farming," Gilbert says. "If I've got a five-man job, and I go out there with two people, [I] might miss something." But if you have your whole crew working, he says, "you don't miss anything. You get it done."