There's no getting around the strangeness of a map that shows the most distinctive cause of death in each of our 50 states and the District of Columbia.

In Texas, it's tuberculosis. In Maine, it's the flu. And in Nevada, it's the ominous "legal intervention."

But what does it mean to label a cause of death distinctive? 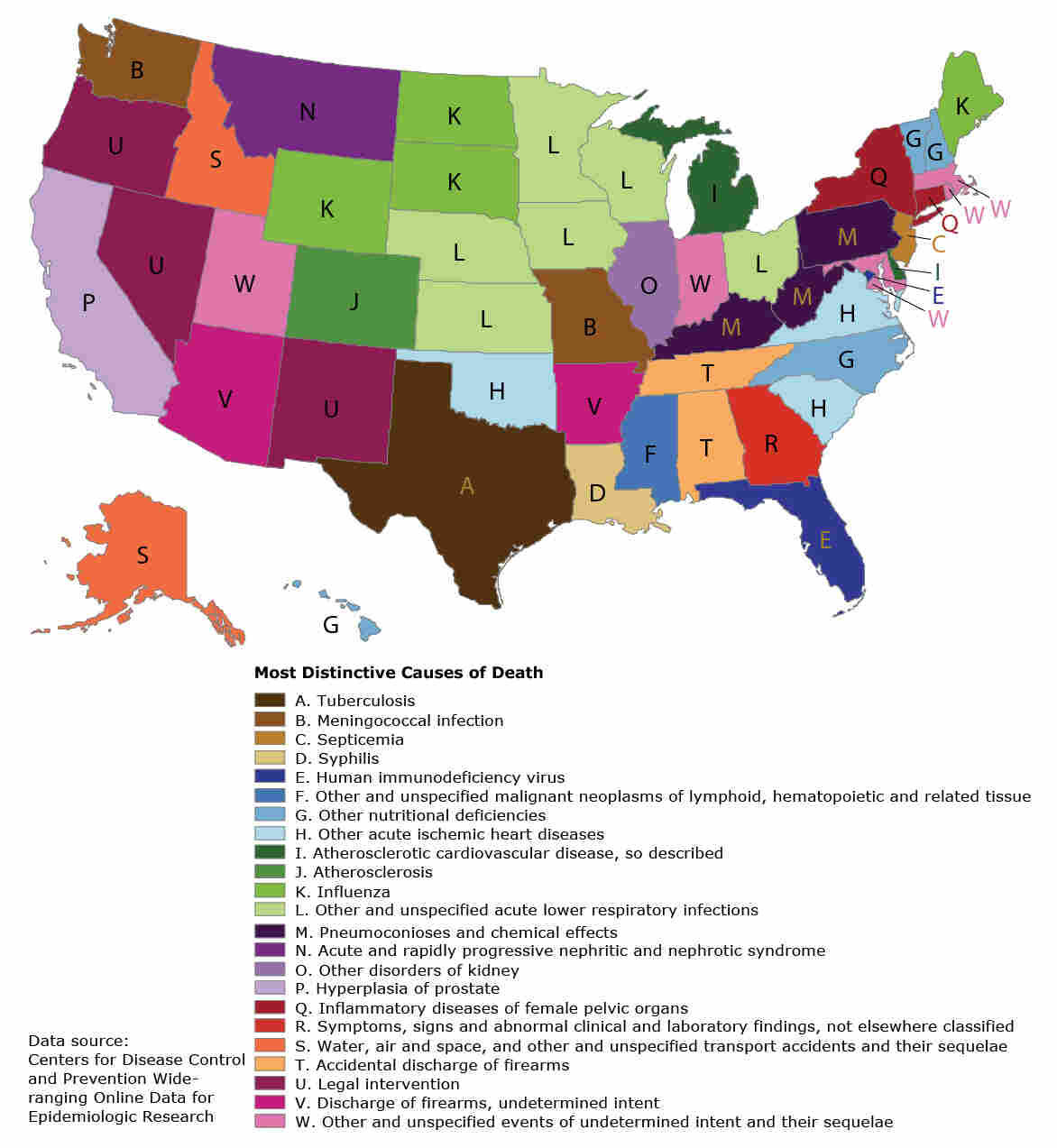 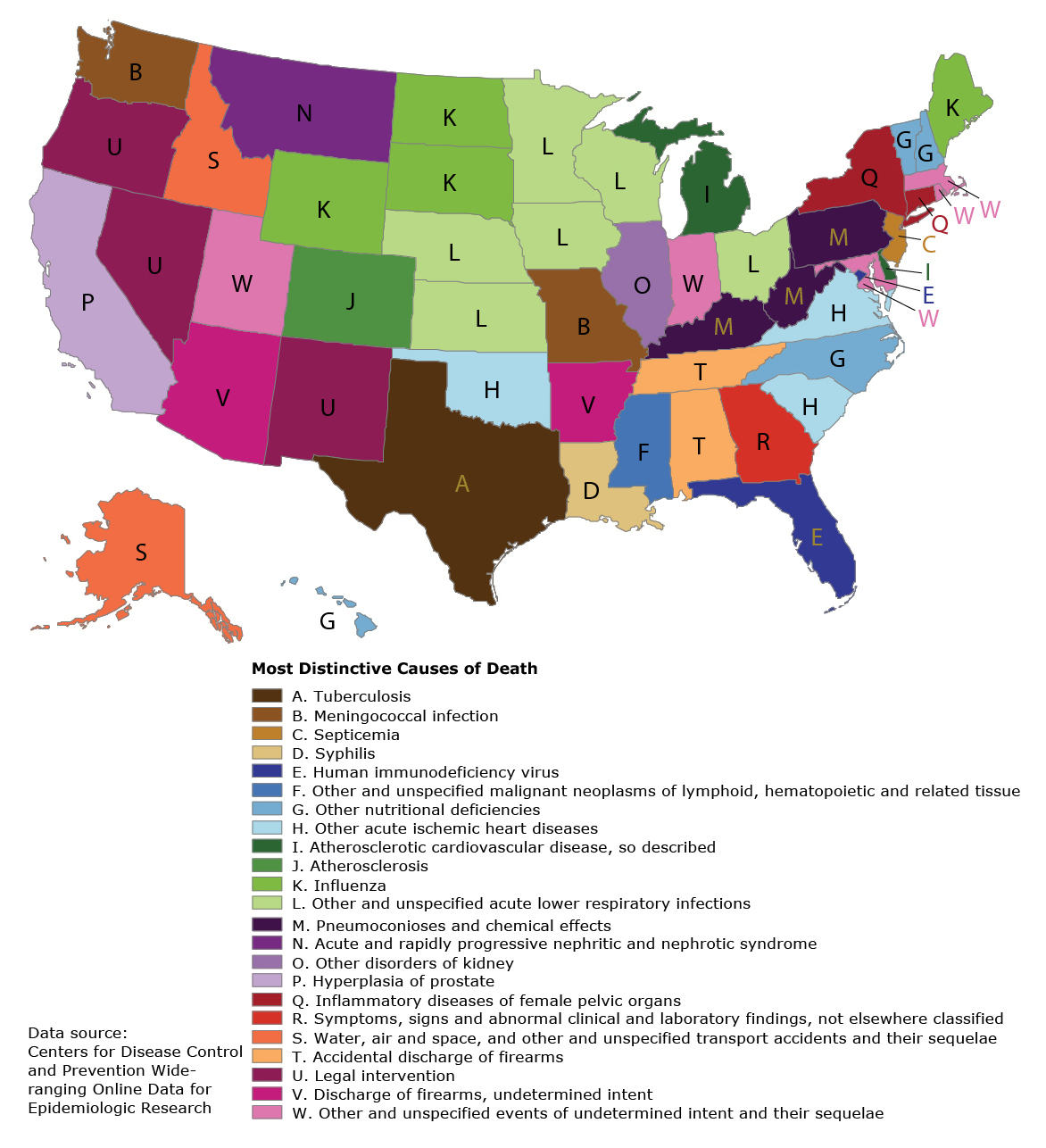 I asked Francis Boscoe, a researcher with the New York State Cancer Registry, who came up with the analysis and the map published last Thursday by Preventing Chronic Disease, an online journal from the Centers for Disease Control and Prevention. Since then, the map has gone, well, viral.

"To be honest, I was seeing these maps about a year ago," he tells Shots. One he points to is a state-by-state map of distinctive musical artists based on the online listening habits of people across the country. In other words, which artist was listened to far more often in one state than the others.

"I wondered what it would look like if you applied this to something more serious, like mortality data," he says. He took advantage of a standardized list of causes of death — 113 in all — that are used across the country and a national database of the underlying causes of death collected between 2001 to 2010.

Boscoe calculated the mortality rates for all 113 causes of death in each state and compared them with the rates for the same causes nationwide. On the map, each state and Washington, D.C., then got labeled with the local cause that was, essentially, the largest multiple of the corresponding national rate.

If you'd like to try it, here's the formula for standardized mortality rate that he used:

The biggest of the outliers was Oklahoma, where the rather vague death cause "other acute ischemic heart diseases" was used 19.4 times more often than it was nationally.

Boscoe says the most distinctive death cause in about half the states, including Oklahoma, says more about how people there are classifying deaths than the actual health of people. There are "a few different flavors of heart disease," Boscoe says. "Oklahoma, for whatever reason, is putting them in the other, unspecified category. If you're interested in heart attacks vs. chronic heart disease, you're not going to get a good read on that there, whereas in most states you would."

Other top causes are clearly on the money, he says, such as tuberculosis in Texas and black lung disease, or pneumoconiosis, in the coal-mining states of West Virginia and Kentucky. Those causes are straightforward to diagnose and make sense in context.

The map has limitations. "Some states deserve to have more than one color," he says, because there are a couple of causes that rise above the rest. In Nevada, for instance, he says, atherosclerosis and legal intervention (which is a death in the context of a crime scene and could be either someone in law enforcement or a civilian) were both quite high.

In general, he says, the most distinctive cause of death in each state is at least double the corresponding national rate. He plans on looking at that doubling rule of thumb in more detail.

Boscoe says the map has already sparked conversations with public health officials in some states about how to improve the classification of deaths. And he's been deluged with calls from reporters interested in the prime causes where they work.

While he acknowledges a certain cartoonishness to the map, he says that he doesn't think the work was frivolous: "It obviously works better than sending out a 16-page report that no one would open."