Accessibility links
How A Claim That A Childhood Vaccine Prevents Leukemia Went Too Far : Shots - Health News It seemed to make sense that the childhood Hib vaccine could cut leukemia risk by keeping the immune system in check. But proving there's cause and effect at work turns out to be a challenge. 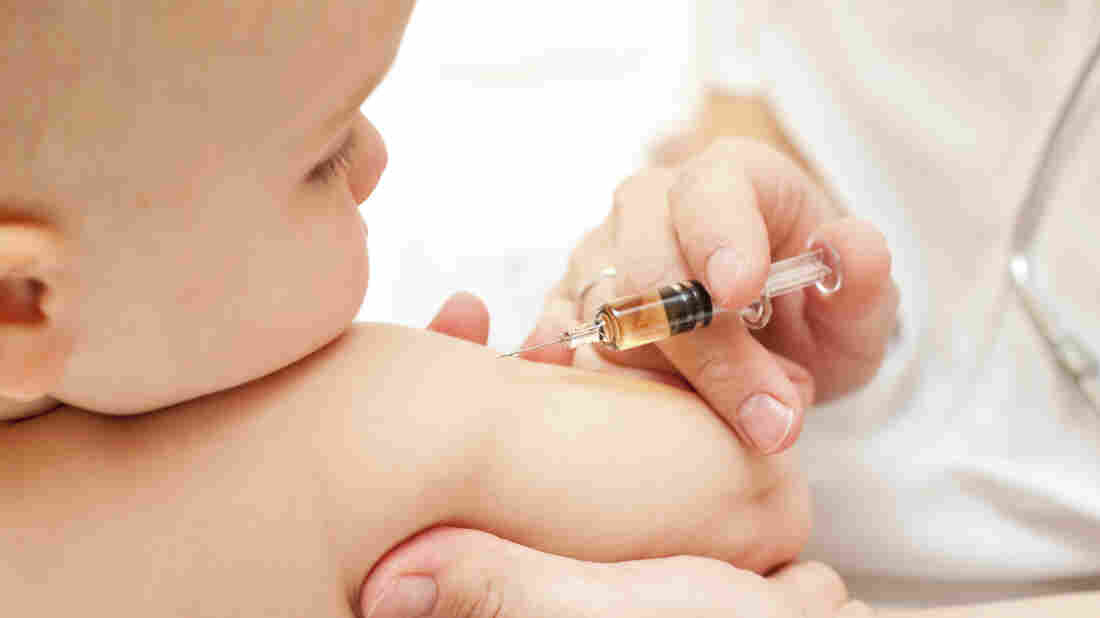 Controversy over childhood vaccines may make it too easy to embrace what appear to be new vaccine benefits. Dmitry Naumov/iStockphoto hide caption

Sometimes a story takes odd turns as you report it. Every once in while it goes off the rails. That's what happened as I reported on a new study purporting to explain how a childhood vaccine helps prevent leukemia. The experience reaffirmed the lessons I've learned in my years of reporting on vaccines and other scientific research: Be wary of grand claims, get outside perspectives on new research and never, ever rely only on the press release.

Of course, the press release headline was captivating: "Study Explains How Early Childhood Vaccination Reduces Leukemia Risk." Multiple news stories were already sharing how the Hib vaccine, which prevents a horrific, often fatal disease known as Haemophilus influenza Type b, could help prevent childhood cancer. It's always thrilling to come across a new way that existing vaccines can benefit people, such as using the tetanus vaccine to enhance immunotherapy for brain tumors. So I eagerly dove into reporting on this development.

Yet something confused me: The press release stated that "the cancer protection offered by the Hib vaccine has been well established in epidemiological studies." I had never heard that vaccines reduced leukemia risk, despite having read hundreds of studies on vaccines. But I'm also a journalist, not a researcher or clinician. My expertise is in finding the right experts to talk to me about research, not knowing the whole research base. I expected the experts would shed some light.

First I spoke to the study author, Dr. Markus Müschen, a professor at the University of California, San Francisco. The way he explained the mechanism made sense. Early exposure to slight challenges to the immune system, such as vaccines and minor infections from daycare, keep the immune system in check, he said. Without that, the immune system can kick into high gear with a major infection, such as Hib, and cause two enzymes in particular to overreact.

And it just so happens that these two enzymes also apparently play a role in the development of acute lymphoblastic lymphoma, or ALL, one of the most common childhood cancers. Müschen's experiments in mice showed that these enzymes, when activated by repeated inflammation, might cause pre-leukemic cells to develop into leukemia.

But when Müschen said it was "common knowledge that vaccines protect against cancer and leukemia," a "fact had been known for many years," alarm bells rung in my head.

I wasn't aware of any vaccine that prevented leukemia.

Further, a quote from Müschen in the press release said his "experiments help explain why the incidence of leukemia has been dramatically reduced since the advent of regular vaccinations during infancy." But I couldn't find evidence of this dramatic reduction in government health statistics.

"I think this research is very interesting and thought-provoking, but I can't connect the data they're presenting to how Hib vaccine may reduce the risk of childhood leukemia."

When I turned to outside experts, I discovered my confusion was justified.

I asked Dr. Walter Orenstein, associate director of the Emory Vaccine Center, if he could help or recommend others. He sent me to Dr. Art Reingold, head of epidemiology at the University of California, Berkeley, School of Public Health, and Dr. Martha Arellano, an oncologist specializing in leukemia at the Winship Cancer Institute of Emory University. Arellano also suggested I speak with Dr. Edmund Waller, an immunologist and oncologist also at Emory's Winship Cancer Institute.

Every one of them conveyed the same message: Nothing in this paper proves that the Hib vaccine reduces leukemia risk, much less helps prevent ALL.

In fact, the word "vaccine" appears only once in the entire paper, to cite a handful of observational studies that have shown a correlation between Hib vaccination and lower leukemia rates. But the first rule of science journalism (and science) is that correlation doesn't equal causation.

"I think this research is very interesting and thought-provoking, but I can't connect the data they're presenting to how Hib vaccine may reduce the risk of childhood leukemia," Arellano said. "I think it's a jump."

Reingold said something similar and pointed out another limitation. Müschen's experiments involved mice, and, well, mice aren't humans. "People have raised increasing doubts about whether mouse immunology, however elegant, is representative of human immunology," he told me. The study did test leukemia-infected human tissue for the gene expression caused by the two enzymes, but again, that's only an association.

Reingold also confirmed that the HPV and hepatitis B vaccines were the only vaccines known to reduce risk of specific cancers. "Those are infectious agents that we know produce chronic infection and that does result in cancer in some people," Reingold said. "But if one is making a statement beyond that, that is highly dubious and it wouldn't hold up to scrutiny among people who study vaccines. I think this is an instance where one should be more cautious in making a connection."

Waller concurred with Arellano and Reingold: "What I see from the paper does not prove a causal or protective relationship of the Hib vaccine in preventing ALL because I don't see the data that would support that." While we were on the phone, he pulled up the supplementary materials for the paper to be sure we weren't missing something. Nope.

I also asked Dr. Paul Offit, director of the Vaccine Education Center at the Children's Hospital of Philadelphia and an outspoken supporter of childhood immunizations, if he had heard of the leukemia-preventing powers of the Hib vaccine. If anyone knew of a side benefit of vaccines that might improve their public image, it would be Offit. But nope. He, too, hadn't heard that vaccines reduce leukemia risk.

So I returned to Müschen and told him of the skepticism I had heard from others. "As we had discussed," he told me, "the protective effects of the Hib vaccine were shown in many previous studies, not ours. Our study provides a potential mechanism of how the protective effect can work" — the mechanism driven by those two enzymes. But the press release contains no ambiguity on this point. It clearly suggests that Müschen's findings prove Hib vaccines prevent childhood leukemia, and he appeared to confirm this idea in our initial interview.

Most news organizations reported that the prevention occurs because a Hib infection stimulates the overreaction of these enzymes, so preventing Hib prevents that overreaction. But Reingold told me the characterization of Hib as chronic in the study is inaccurate. It's an acute infection: "You're only infected for a few days before you get better or die," he said.

In short, this study's press release greatly oversold the findings, and in my first interview with him, Müschen didn't discourage this conclusion. Was the research interesting? Yes. Does it add to our understanding about how leukemia begins? Yes. Can other researchers build on what Müschen and his colleagues demonstrated? Yes. Does it show that the Hib vaccine helps prevent cancer? Absolutely not.

Then why all the media attention? I suspect it has something to do with the huge public attention on vaccine refusal, especially after this year's measles outbreak in unvaccinated people. That might make people too eager to embrace what appear to be new vaccine benefits. "We all support vaccination, and we as physicians from various specialties believe they're one of the greatest advances of medicine in the 20th century," Waller said. "To see that being rolled back in the 21st century is very concerning."