Accessibility links
New Hearing Technology Brings Sound To A Little Girl : Shots - Health News Jiya Bavishi is one of a handful of children in the United States testing an experimental hearing device, a tiny implant in her brainstem. Jiya is now able to hear and repeat some sounds. 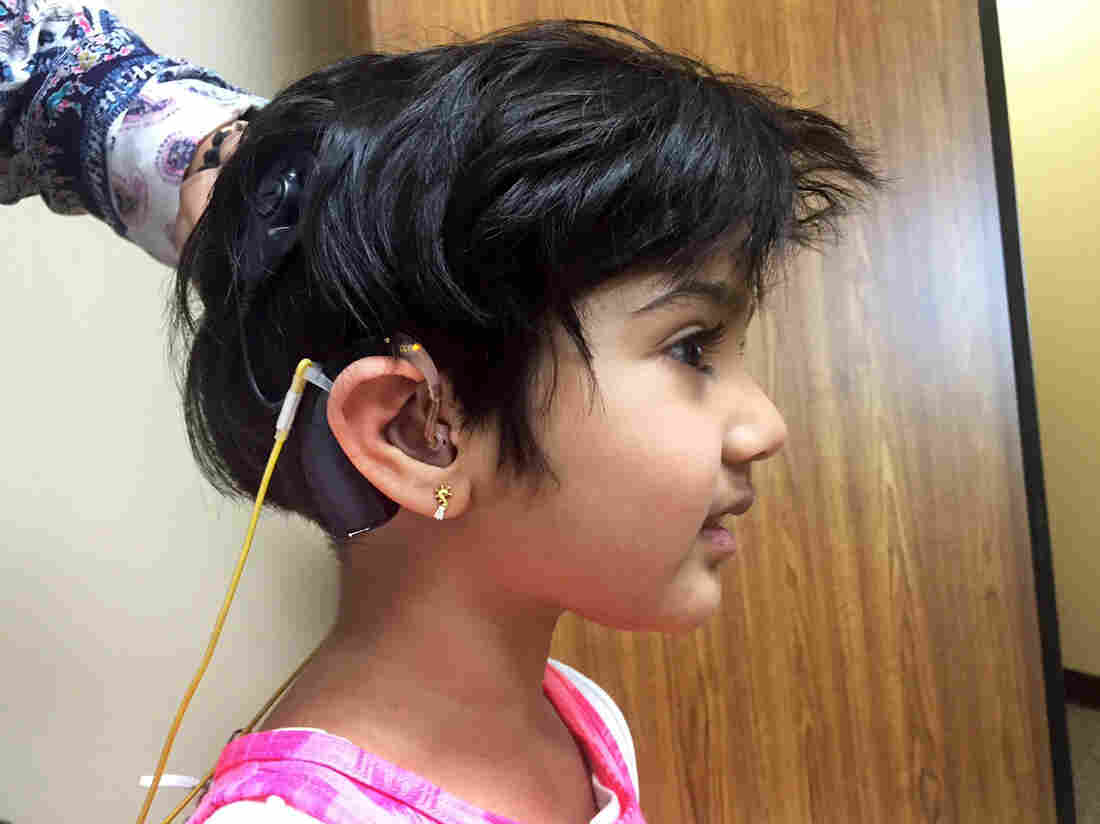 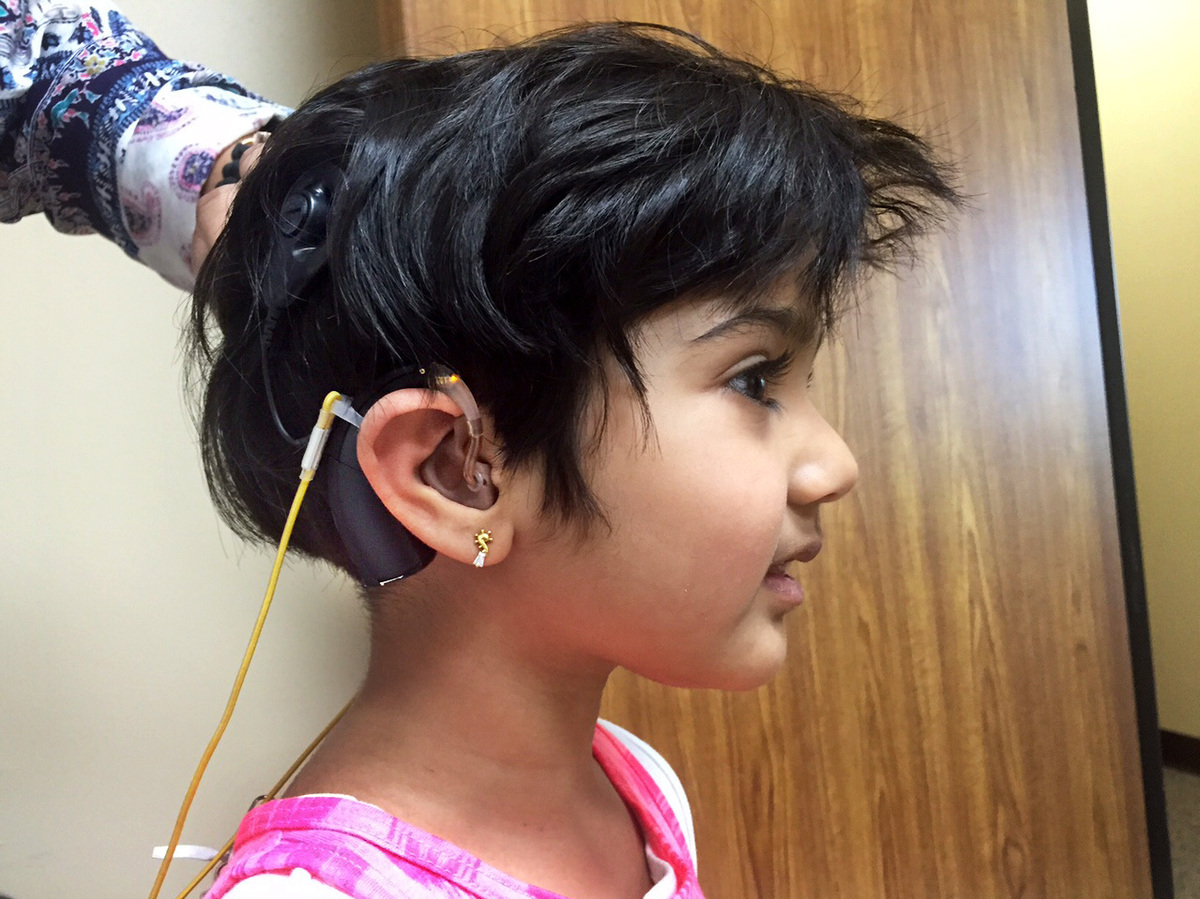 Jiya Bavishi's auditory brainstem implant is helping her hear some sounds for the first time.

Jiya Bavishi was born deaf. For five years, she couldn't hear and she couldn't speak at all. But when I first meet her, all she wants to do is say hello. The 6-year-old is bouncing around the room at her speech therapy session in Dallas. She's wearing a bright pink top; her tiny gold earrings flash as she waves her arms.

"Hi," she says, and then uses sign language to ask who I am and talk about the ice cream her father bought for her.

Jiya is taking part in a clinical trial testing a new hearing technology. At 12 months, she was given a cochlear implant. These surgically implanted devices send signals directly to the nerves used to hear. But cochlear implants don't work for everyone, and they didn't work for Jiya.

Cochlear Implants Redefine What It Means To Be Deaf

"The physician was able to get all of the electrodes into her cochlea," says Linda Daniel, a certified auditory-verbal therapist and rehabilitative audiologist with HEAR, a rehabilitation clinic in Dallas. Daniel has been working with Jiya since she was a baby. "However, you have to have a sufficient or healthy auditory nerve to connect the cochlea and the electrodes up to the brainstem."

Jiya's connection between the cochlea and the brainstem was too thin. There was no way for sounds to make that final leg of the journey and reach her brain.

A microphone behind the ear sends signals through a magnet to electrodes implanted on the brain's brainstem.

Usually, the story would end here. If cochlear implants don't work, you turn to sign language. And the Bavishis did — for years they communicated with their daughter through sign language. But then they heard about an experimental procedure called an auditory brainstem implant. 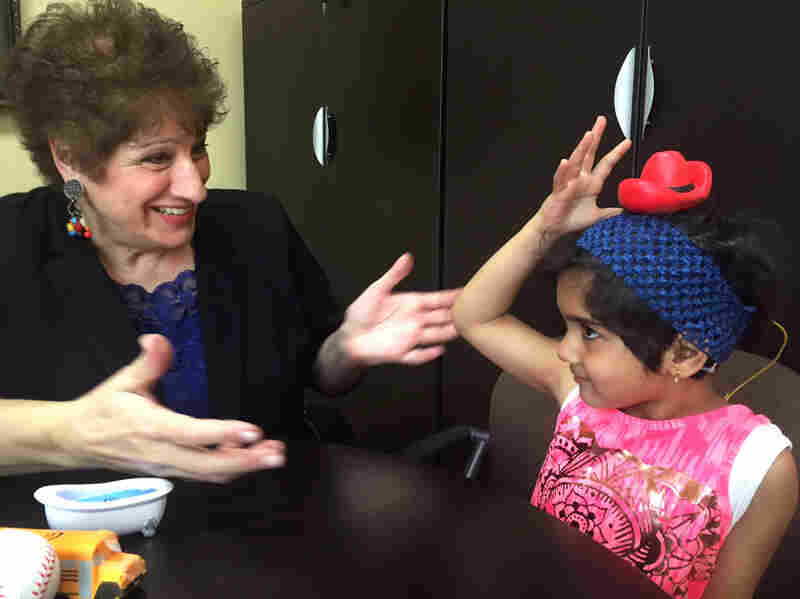 Rehabilitative audiologist Linda Daniel has been working with Jiya since she was a baby. Lauren Silverman/KERA hide caption 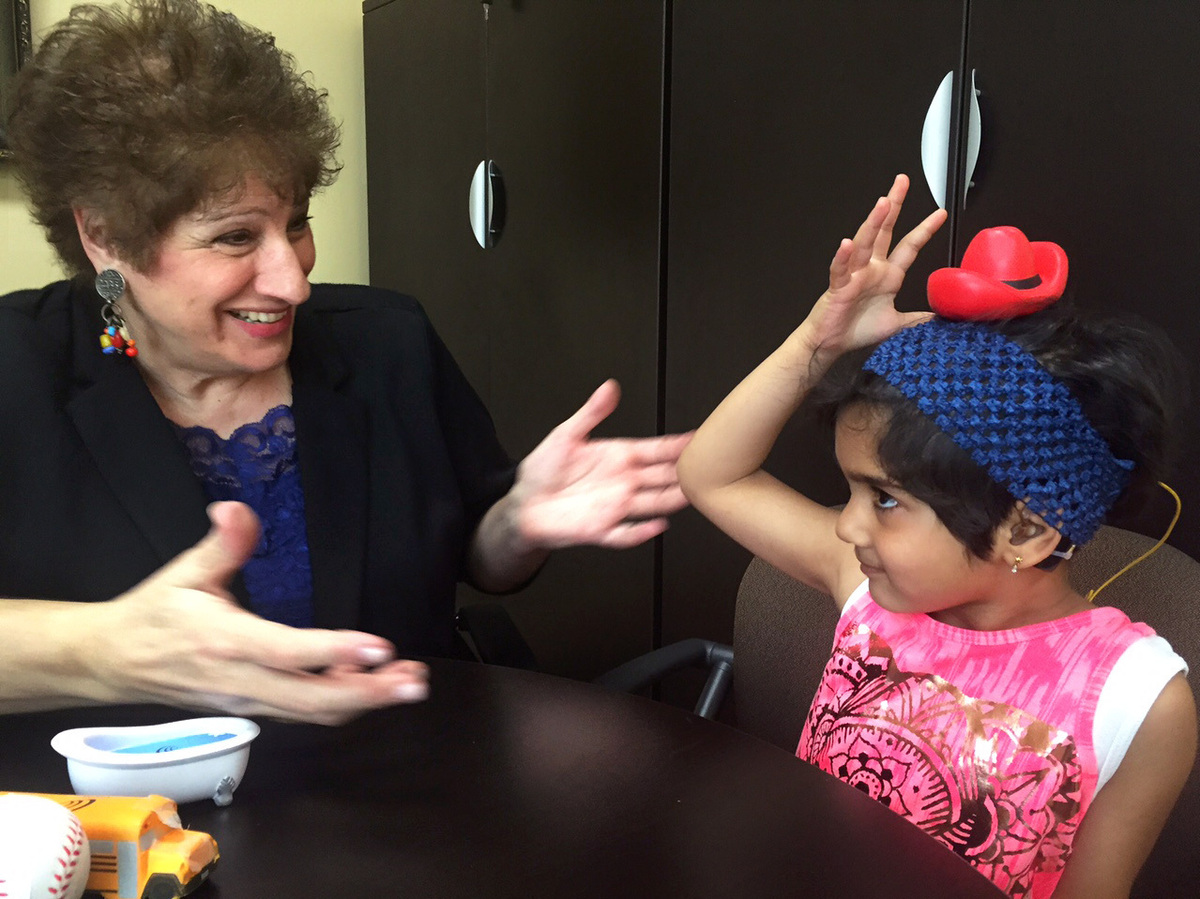 Rehabilitative audiologist Linda Daniel has been working with Jiya since she was a baby.

It is a very rare procedure, according to Dr. Daniel Lee, director of the pediatric ear, hearing and balance center at Harvard Medical School. "There have been less than 200 of these implanted worldwide in children," he says. In the U.S., auditory brainstem implants are approved by the Food and Drug Administration for adults and teenagers who have lost their hearing owing to nerve damage, but they have not been approved for use in younger children.

Surgeons in Europe have pioneered the use of the auditory brainstem implant in children who are born deaf and can't receive a cochlear implant, Lee says. "And those data look pretty encouraging."

Jiya is able to hear and repeat some sounds.

So in 2013, the FDA approved the first clinical trial in the U.S. for young children. The Bavishis decided to apply for Jiya. It wasn't an easy decision. It would involve surgery to place a tiny microchip into Jiya's brainstem.

"The family was at a crossroads," Daniel says. Did they want to take a chance on a risky, experimental procedure to give their daughter a chance to hear? They decided to try the procedure and traveled from their home in Frisco, Texas, to Chapel Hill, N.C., for the eight-hour surgery. The University of North Carolina is one of four institutions investigating the implant.

Jiya's mom, Jigna Bavishi, pulls back her daughter's purple headband to reveal two of the three parts of the device.

There's the piece that sits on her ear, which works like a microphone to pick up sounds. That microphone is attached to a small black magnet that rests on her head. What you can't see is what the magnet is connected to. And this is what makes it different from a cochlear implant. Below the skin, there's a receiver, and down in the brain stem is the microchip. The idea is that the sounds picked up from the microphone on her ear end up in the implant in the brainstem.

"It's a rectangular-shaped element," says rehabilitative audiologist Daniel. "It has two rows of electrodes and each electrode is responsible for a band of frequencies." The electrodes transmit signals directly into the brain.

"I think we could assume that it doesn't sound crisp, distinct, clearly interpretable," she says. "It would take longer to learn to interpret the sound."

Doctors told the Bavishis not to expect any changes for a year or two. But Jiya didn't take that long to start recognizing and mimicking sounds. On the day I visit, Jiya is playing with a yellow toy car. "Beep, beep," she says.

"They actually had to tell us, even though she's doing so good right now, we have to still be careful where we set our expectations," says Jigna.

Doctors will monitor Jiya, and four other children taking part in the study, for the next few years. They'll be studying how their brains develop and incorporate sounds and speech. There are two other clinical trials investigating auditory brainstem implants in children: one at Children's Hospital in Los Angeles, and the other at the New York University School of Medicine.