Accessibility links
Placenta Pills Gain Fans Among New Moms, But Benefits Are Elusive : Shots - Health News If Kourtney Kardashian and Mayim Bialik do it, is it good for you? Pills made from a woman's placenta are being promoted for postpartum depression. But there's no evidence they help, a review finds. 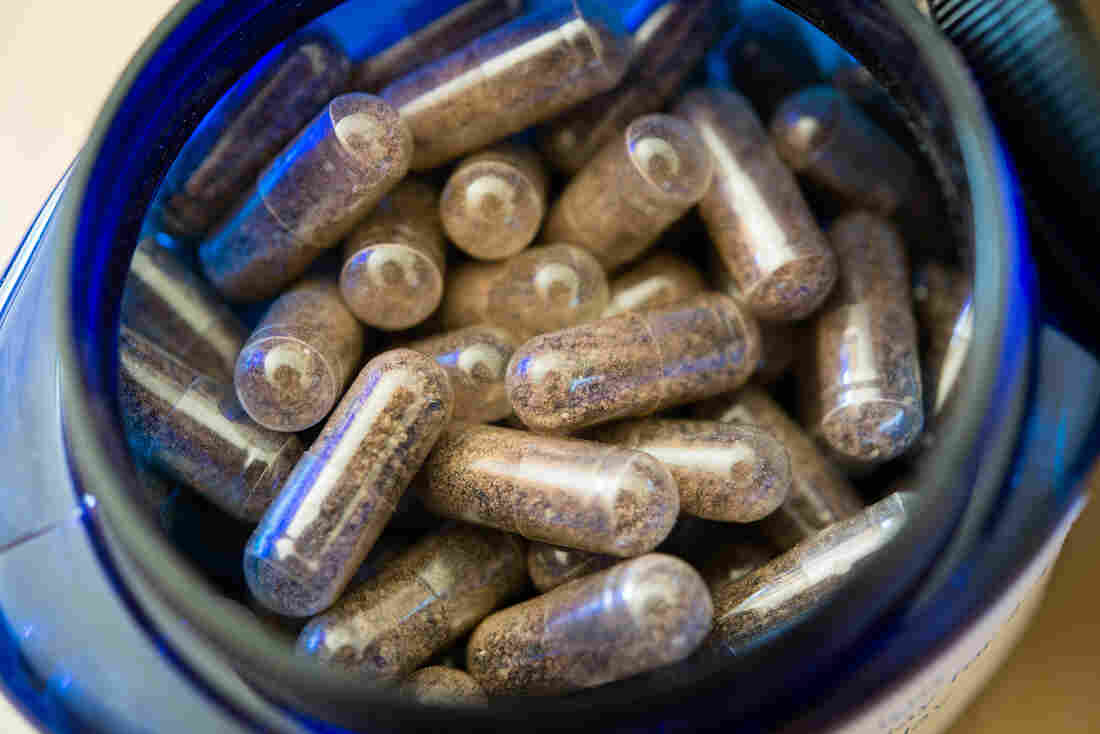 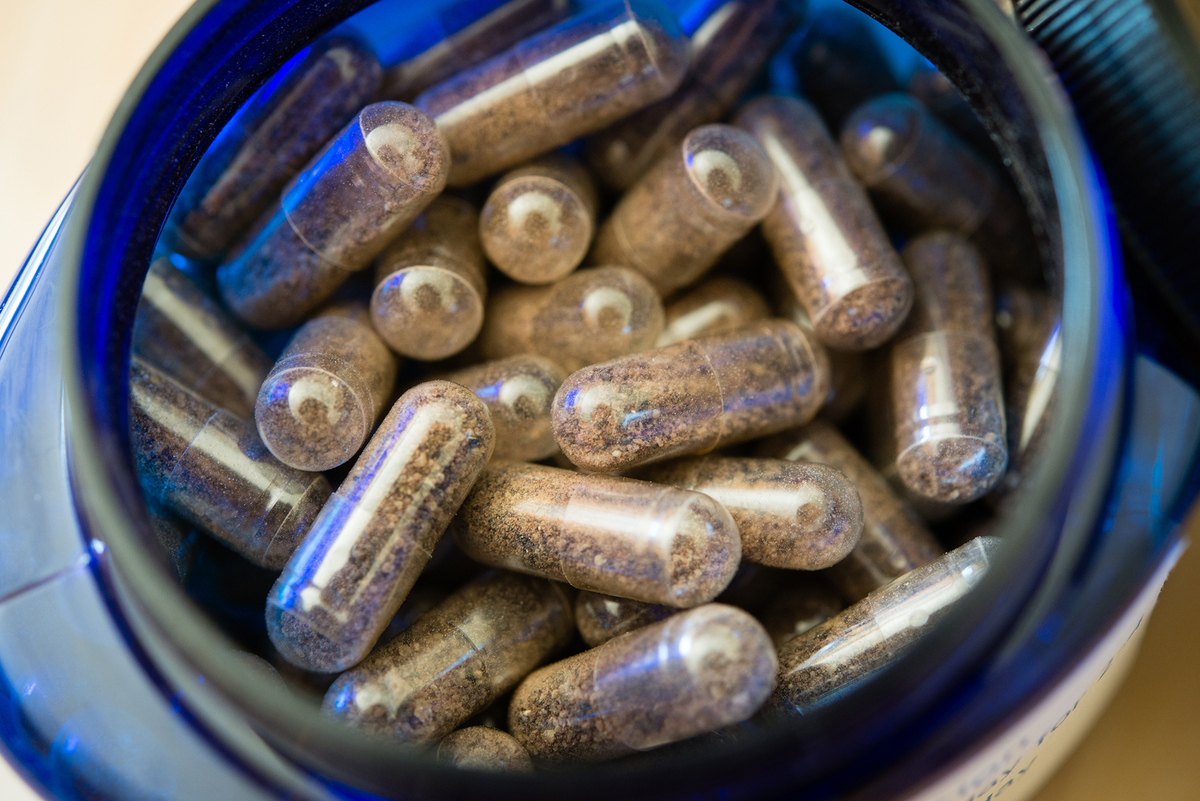 Pills are made from dehydrated placenta.

It was "life-changing" for Kourtney Kardashian. Mad Men actress January Jones touted its benefits too. Tia and Tamera Mowry of the reality show Sister Sister tried it, as did Alicia Silverstone, Big Bang Theory star Mayim Bialik, and various other celebrity moms who raved about feeling more energized, reducing their risk of depression, improving their breast milk production and a host of other supposed benefits.

But did consuming placenta in the weeks or months after birth actually have any effect?

It's not clear, according to a study out Thursday that reviewed what little scientific evidence exists on the effects of human "placentaphagy." In short, no reliable published scientific studies have adequately assessed what eating one's placenta does or doesn't do.

"We simply don't know what all the potential benefits or risks are yet," said Daniel Benyshek, an associate professor of anthropology at the University of Nevada at Las Vegas who has studied placentaphagy. "Indirect evidence suggests that it is probably a safe practice — at least in the short term — given the number of women that are likely engaged in placentaphagy in just the U.S. alone, but we don't have any good estimates based on real data about how many women are engaging in this practice."

"This paper reflects the ongoing interest and fascination with placentaphagy and that by all appearances, this is a growing trend," said Benyshek, who was not involved in the review. "This appears to be something that more and more women are deciding to do."

Many of those women are seeking protection against postpartum depression, according to a survey conducted in 2013 by Benyshek, his colleagues and Jodi Selander, founder of Placenta Benefits LTD in North Las Vegas, NV. Selander's company steams and dehydrates placentas to prepare them for encapsulation according to methods similar to those used in traditional Chinese medicine. In that tradition, placenta medications are called "zi he che" and are not limited to women for the various ailments they supposedly treat.

"I find that using the capsules tends to make things a little more palatable for women," Selander said. "I'm not particularly a proponent of raw or raw dehydration because food safety handling and standards come into that."

Costs for encapsulation range from about $200 to $350, Selander says, with local specialists setting their own prices.

Yet some women do consume their placentas raw, cooked or even in smoothies. Raw consumption poses the most obvious risks if bacteria are present, but other theoretical risks of any method include possible contamination with parasites or concentrations of toxic substances, such as different metals, that build up in the tissue. After all, one of the placenta's jobs is to act as a barrier that protects the fetus from such substances in the womb.

Longer term consequences, such as immunological or gastrointestinal ones, are not far-fetched possibilities either, said Mark Kristal, a professor emeritus of psychology at the University at Buffalo, who has likely done the most experimental research into placentaphagy.

"Most people are going to look for whopping obvious negative consequences, but evolution doesn't work that way," Kristal said. "We're not necessarily going to see that everyone who eats their placenta gets wildly sick or has major medical problems. Evolution can work on very subtle positive and negative effects over generations."

A more immediate potential harm, however, could be that women suffering symptoms of postpartum depression neglect to seek other therapies if they rely on their placenta to pick up their mood.

"Placentaphagy capsules have not been tested in a randomized controlled trial compared to antidepressants that have been," said Dr. Crystal T. Clark, author of the review published Thursday in Archives of Women's Mental Health, and an assistant professor of psychiatry at Northwestern University Feinberg School of Medicine. "The risk is that it's not an effective treatment but a placebo, and then a woman is suffering from depression and all the consequences that come with postpartum depression."

An estimated 1 in 7 mothers experiences postpartum depression, which can have adverse effects on mothers and their infants, said Dr. Nicole Cirino, a reproductive psychiatrist at Oregon Health and Science University.

"It can affect things like infant development, IQ and the overall health of the child, so we take postpartum depression seriously," Cirino said. "When we see trendy ideas about treatment that are not substantiated in the literature, we do get concerned because we don't want this condition to be undertreated, and there are well-established, appropriate treatments for postpartum depression, including preventing postpartum depression."

Selander encourages women to finish off their capsules in the first few weeks after giving birth, before most women would be diagnosed with a mood condition. Yet Clark has done preliminary research finding that almost a third of women in a sample of 139 would be as willing to try placentaphagy as they would prescription medication for postpartum depression. That means evidence is needed – and it may be coming soon.

Benyshek is wrapping up the first randomized controlled double-blind pilot study of human placentaphagy effects using capsules prepared by Selander. He expects it to be published in the next year.

"One of the intriguing things about the practice among humans is its near ubiquity among mammals," Benyshek said. "What that says to me as an anthropologist and a scientist is that gives us good reason to suspect that there may be something happening here that goes beyond placebo effects because you obviously don't have placebo effect with animals."

Aside from use in traditional Chinese medicine, the first documented instances of women consuming their placentas postpartum occurred in the 1970s. There isn't other evidence of humans engaging in placentaphagy as a cultural custom, not even cannibalistic societies, said Kristal.

Much of his research involving experiments on rodents has revealed that consuming the placenta or amniotic fluid appears to relieve labor pain. Yet "there must be a reason why humans don't do it," he said. It may be that some other feature of human birthing, such as assisted birth, outweighs the possible benefits of placentaphagy – which implies that benefits could yet be discovered. "Absence of proof is not proof of absence," he said.

Until that evidence exists, however, it seems at least part of women's experiences is likely a placebo effect.