Accessibility links
The Hard Work Of Waiting For A Hand Transplant : Shots - Health News Kevin Lopez was born missing the fingers on his right hand. Now 20, Lopez has been on a waiting list for a hand transplant since turning 18. 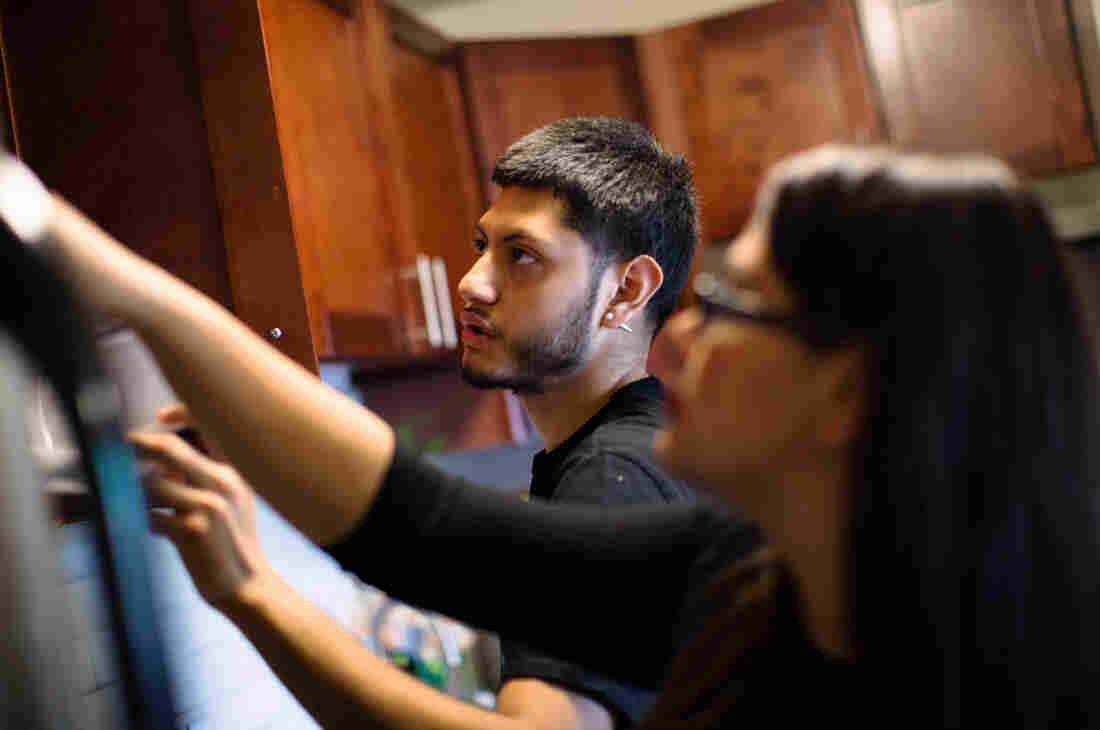 Kevin Lopez makes breakfast with his sister Jenny. He is waiting for a donor hand to remedy a genetic defect. Meredith Rizzo/NPR hide caption 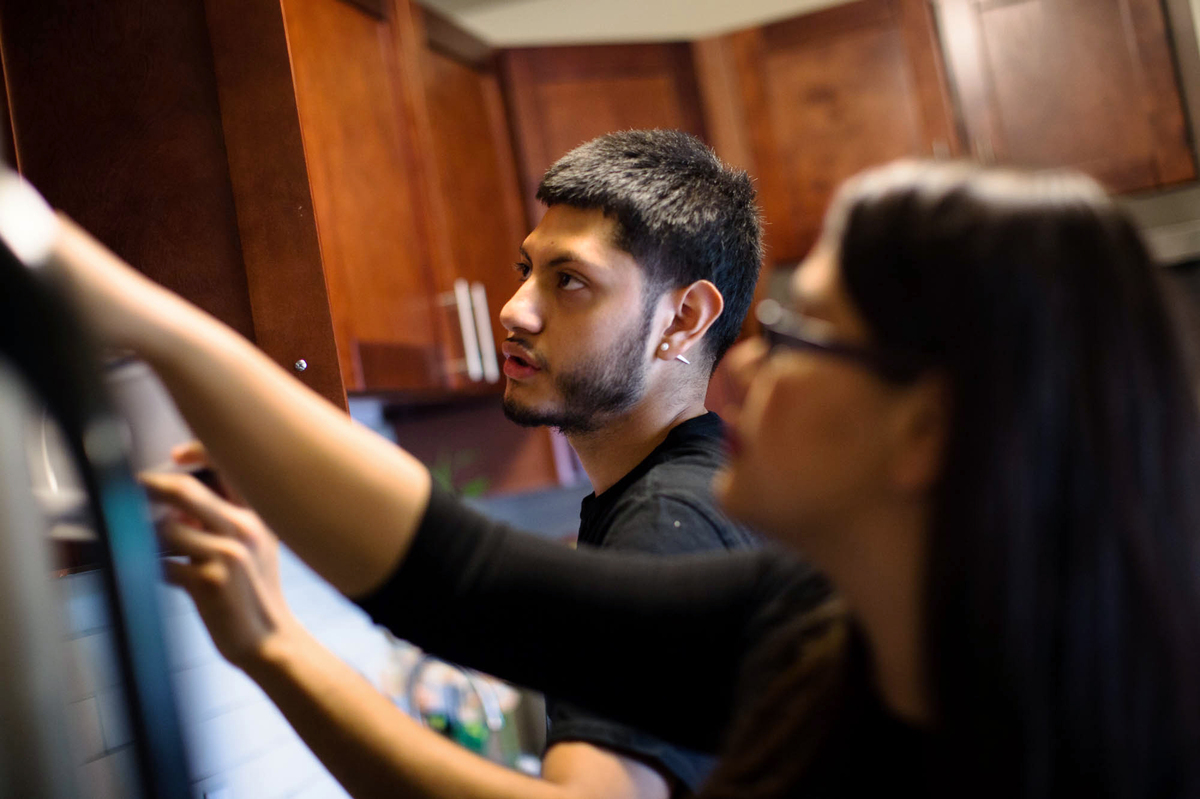 Kevin Lopez makes breakfast with his sister Jenny. He is waiting for a donor hand to remedy a genetic defect.

Kevin Lopez remembers exactly when he knew he wasn't like his friends and family.

"It just hit me one day," he says. It was the morning he was picking out a shirt to wear for his first day of sixth grade. "I just looked at myself and I realized I was different."

Kevin was born missing the fingers on his right hand. His arm and wrist are fully developed, and he has most of a regular palm. But he just has nubs where his fingers should start.

When he looked in the mirror that day, Kevin says he suddenly felt overwhelmingly self-conscious. So he took off the short-sleeved shirt he was wearing and put on a long-sleeved shirt instead. Even all these years later, he gets choked up re telling the story.

Will A Transplanted Hand Feel Like His Own? Surgery Raises Questions

"It was at that point that it became more of a problem," says Lopez, who is now 20. He's waiting to become the first person to get a hand transplant because of a birth defect.

NPR is following Lopez through the process. This story explores how he ended up on the waiting list, and what it's like for Lopez and his family as he waits.

Lopez grew up in a big, close family in Chicago. Seeing Kevin so sad was hard for his sisters. So one of his them, Jenny, thought it might help if he talked about his hand more. She suggested he write about it for a school assignment. Kevin burst into tears. 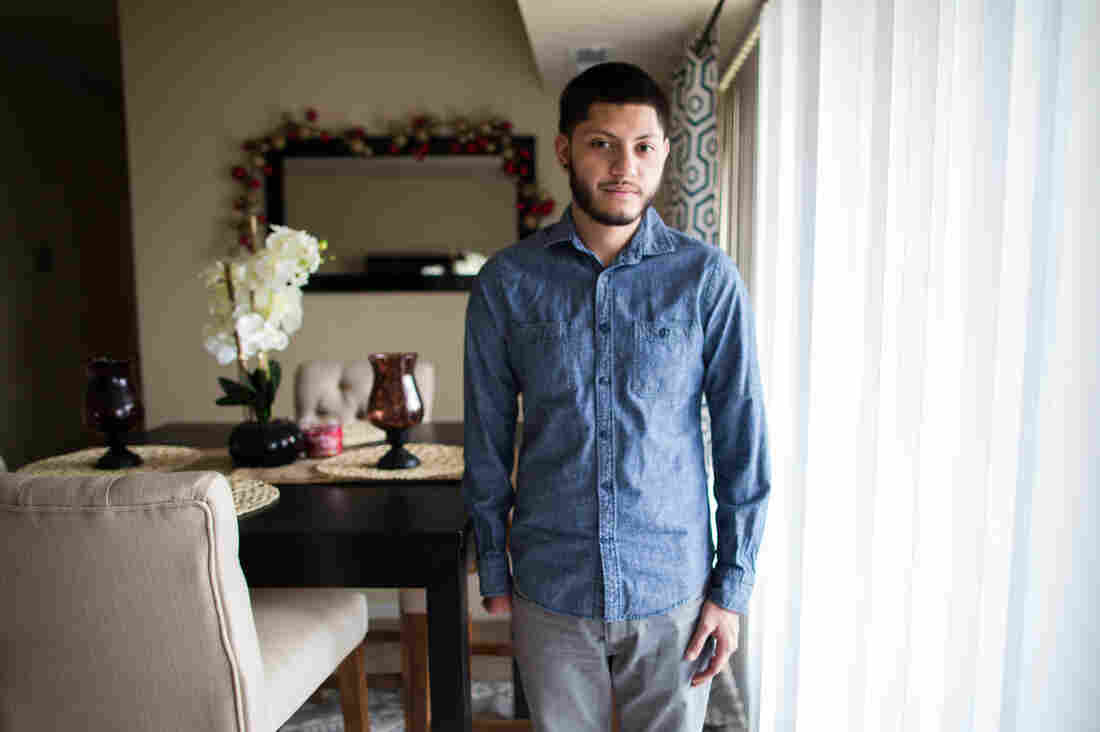 Kevin moved from Chicago to Greenbelt, Md., so he could be closer to Johns Hopkins Hospital in Baltimore. Meredith Rizzo/NPR hide caption 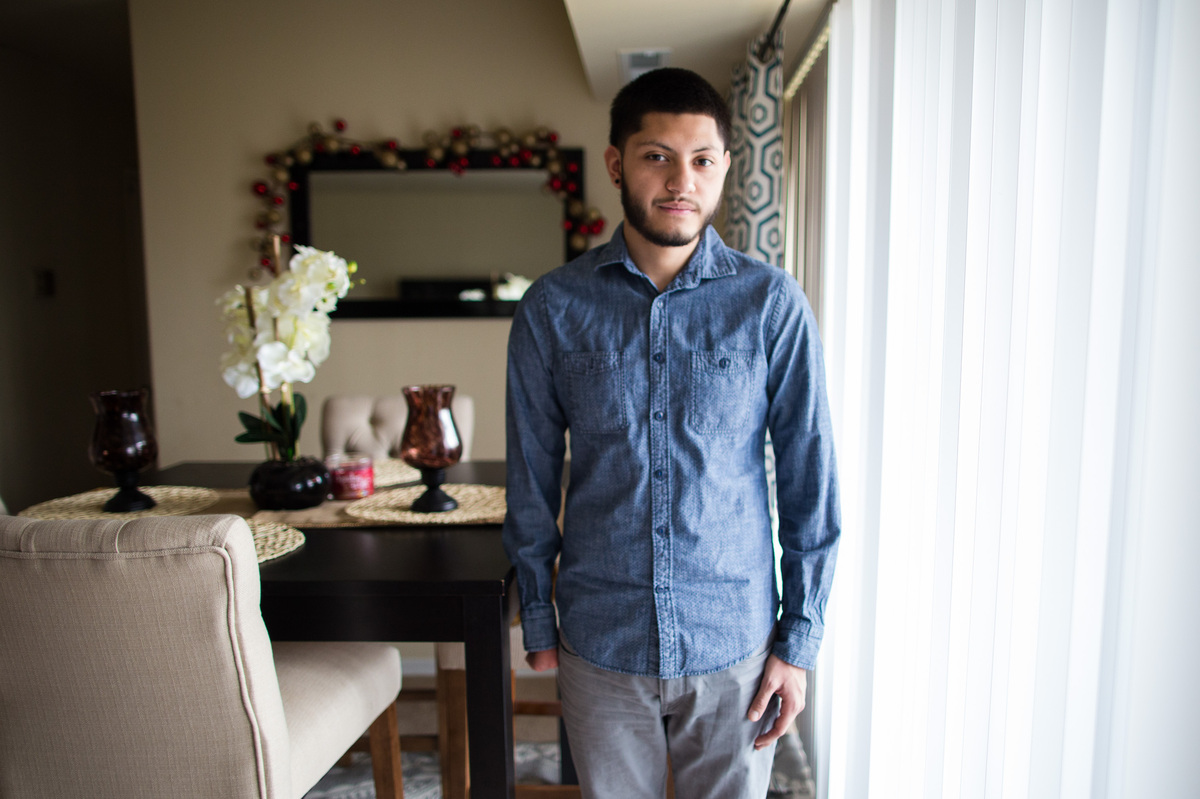 Kevin moved from Chicago to Greenbelt, Md., so he could be closer to Johns Hopkins Hospital in Baltimore.

Ever since then, Jenny's been trying to find a way. But back then, Jenny had no idea what she could.

So Kevin had to learn how to live that way. And, he did pretty well, even playing baseball all through high school by catching and throwing with his good left hand. He also worked as a lifeguard at Lake Michigan during summers.

Then one day Jenny spotted an article in a magazine about a doctor who was doing hand transplants. "I was like, 'Oh my God, that's the guy. That's the guy who's going to help us. I just have to find him,' " she says.

Jenny tracked down the surgeon, W.P. Andrew Lee, at Johns Hopkins Hospital in Baltimore. After a lot of testing and counseling, Lee and his colleagues agreed to put Kevin on the waiting list when he turned 18.

"We thought, 'Oh, they're going to call us at any time,' " Jenny says. So Kevin put off starting college and his family decided Kevin should move closer to his surgeon with one of his sisters. Jenny, who is 10 years older than Kevin, volunteered. 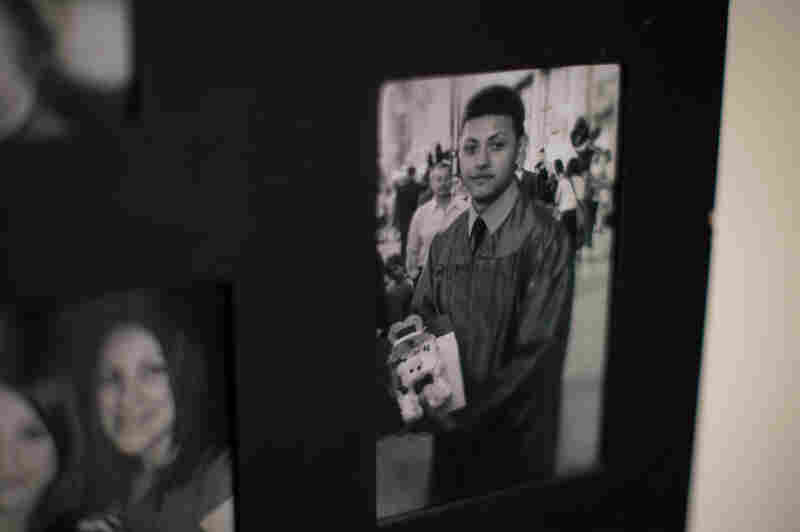 A photograph of Kevin Lopez at his high school graduation hangs on the wall at home. At 18, he was put on a waiting list to receive a hand transplant. Meredith Rizzo/NPR hide caption 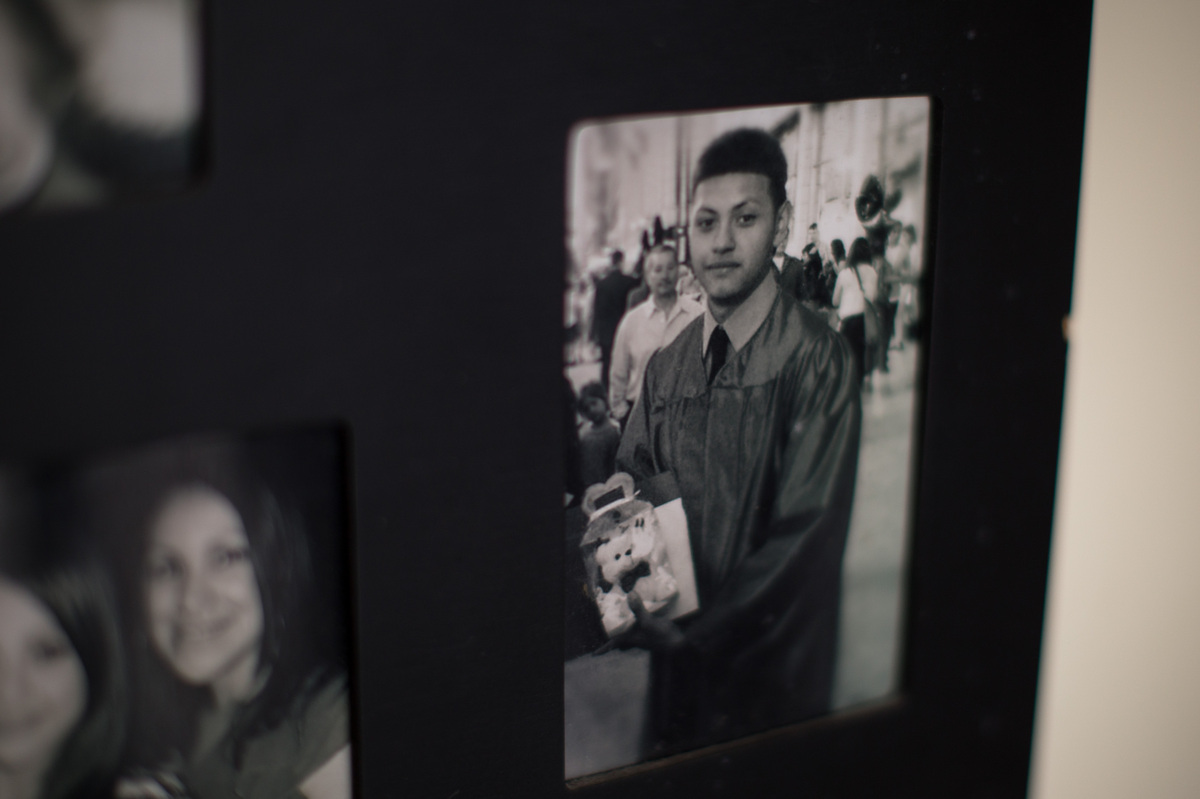 A photograph of Kevin Lopez at his high school graduation hangs on the wall at home. At 18, he was put on a waiting list to receive a hand transplant.

"I'll do it. I want to do this," she remembers sayings. She took her son out of elementary school and broke off her engagement.

Jenny remembers the rainy day her family loaded her big red sofa and the rest of her worldly belongings into the U-Haul.

"All of our stuff got wet, moving it into the truck," she says. "So it was a very gloomy day, just how we were feeling."

Jenny and Kevin drove all night and got to Maryland the next day. And then, the waiting began.

"My life changed obviously dramatically," she says, adding neither of them realized how long it would take.

Waiting for a hand is a lot more complicated than for organs like livers or kidneys. Those just have to match well enough so that the body won't reject them.

A hand has to look right, too. It has to be the right size, age and skin tone. The first person who got a hand transplant ended up asking his surgeon to remove it.

Doctors are being very careful about finding a hand that will match Kevin well. Kevin's case has been complicated by the fact that he's Latino. Latinos don't agree to donate organs as often as Caucasians, though rates of consent for donation among Latinos exceed those for blacks and Asian-Americans.

One morning in June, Kevin woke up, looked at his phone and found a bunch of missed calls and texts from Baltimore. He called his doctors.

"They told me that there was a possibility that we could have a donor," Kevin says.

Jenny was in Savannah, Ga., for a bachelorette party for one of their sisters. "I went to go talk to my sister and I told her, 'I have to leave. I have to drive back to Baltimore.' And she said, 'Why?' And I said: 'Kevin got called and it may be it.' "

The excitement didn't last long. The donor's family felt uncomfortable donating their loved one's hand. Kevin was relieved in a way, but he was also disappointed. "'Oh, wow, it didn't happen,' " he remembers thinking.

But another time, everything seemed like it was going well. This time, the donor's family consented, and the doctors texted a picture of the hand to Kevin. He took one look at it and thought to himself: "This is not the best possible match for me. So I'm not going to go through with it."

The skin tone wasn't quite right.

So Jenny and Kevin continue to wait.

They've been waiting now almost three years, which is longer than any of the other patients Kevin's doctor is caring for.

Kevin even decided he would accept a woman's hand once doctors explained that his hormones would eventually make it look more masculine.

As they wait, Kevin and Jenny are trying to get on with their lives. Kevin started taking classes at a community college. Jenny found a new job, and even recently got a big promotion. But living in limbo is hard for both of them. And sometimes Jenny lets her fears run wild. 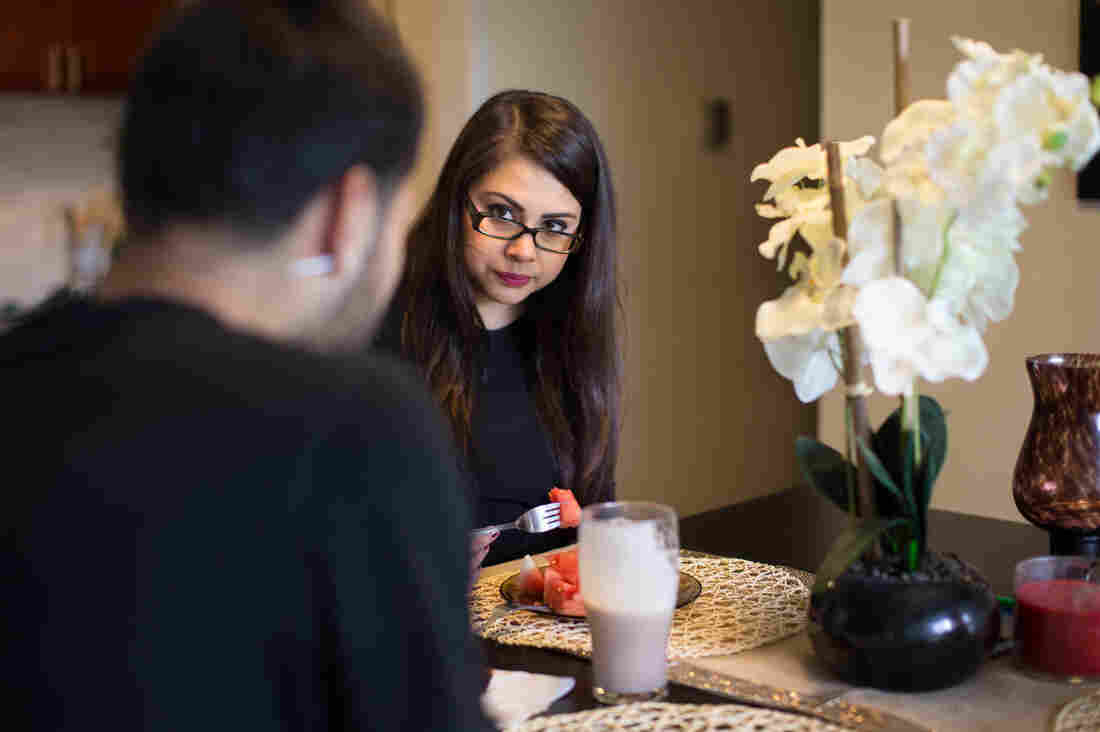 Jenny, who is 10 years older than Kevin, broke off an engagement and left her job so she could move with him to Maryland. Meredith Rizzo/NPR hide caption 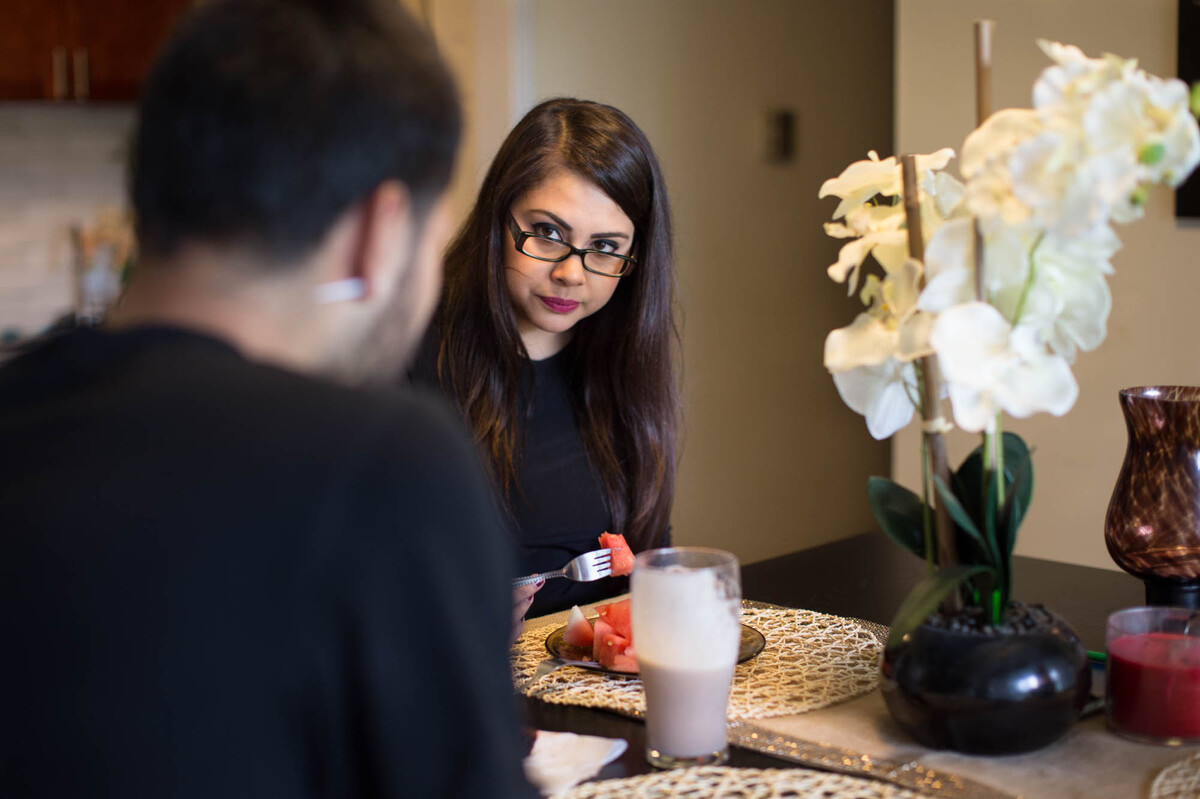 Jenny, who is 10 years older than Kevin, broke off an engagement and left her job so she could move with him to Maryland.

"Sometimes I'll even play it out in my head: 'Well, what if the surgery goes so bad and you know — God forbid — he passes away? Then it's my fault,' " she says. "It's just horrible things I start thinking. I don't want to lose my brother. ... If anything bad happened I would never forgive myself for it."

Hand transplants are really complicated. Beyond the surgery itself, Kevin could end up worse off if he never learns how to use his new fingers or his body rejects the hand. And the anti-rejection drug he'll have to take for the rest of his life comes with side effects.

But Kevin says he understands the risks.

"It's worth anything — it's worth everything. That's how bad I want it," he says. "It will give me that sense of happiness that I don't have without it — that I could only get from having the hand. And that's ultimately why it's totally worth it."

So every time a Baltimore number pops up on their phones they freeze. "My stomach sinks," Kevin says.

But so far the closest they've ever come has been in Jenny's dreams. "I dreamt that Kevin had the surgery, but I couldn't see it," she says. "For some reason they were not letting me see Kevin. I remember the feeling — I was so worried."