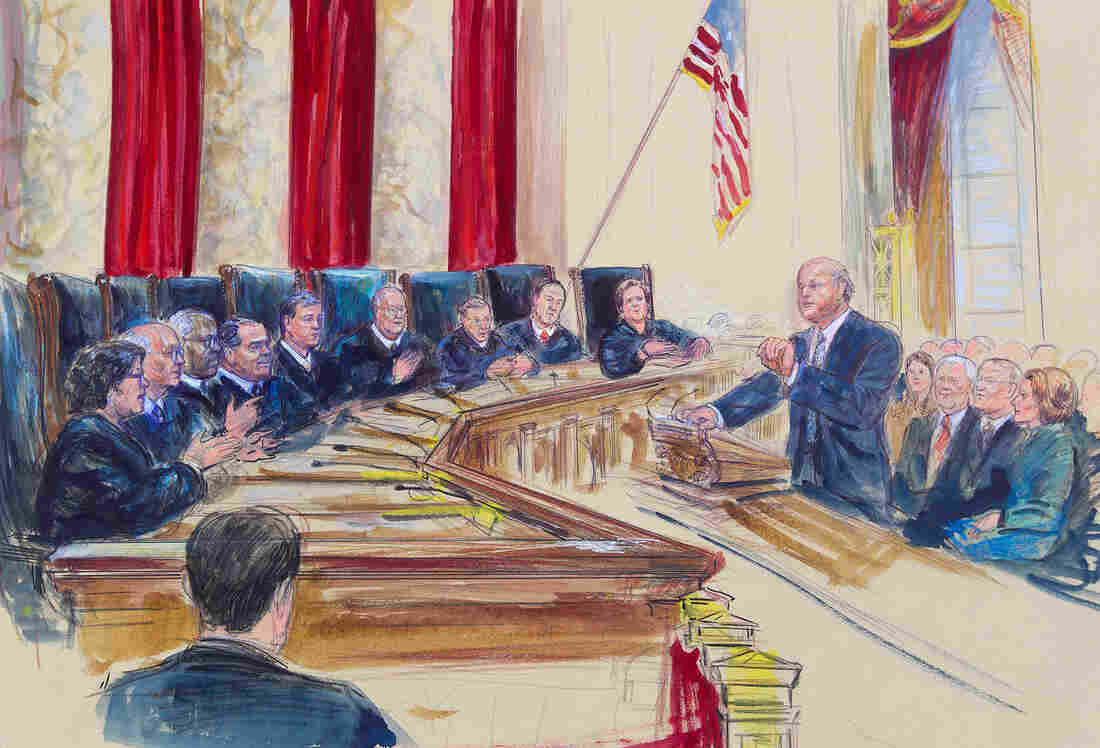 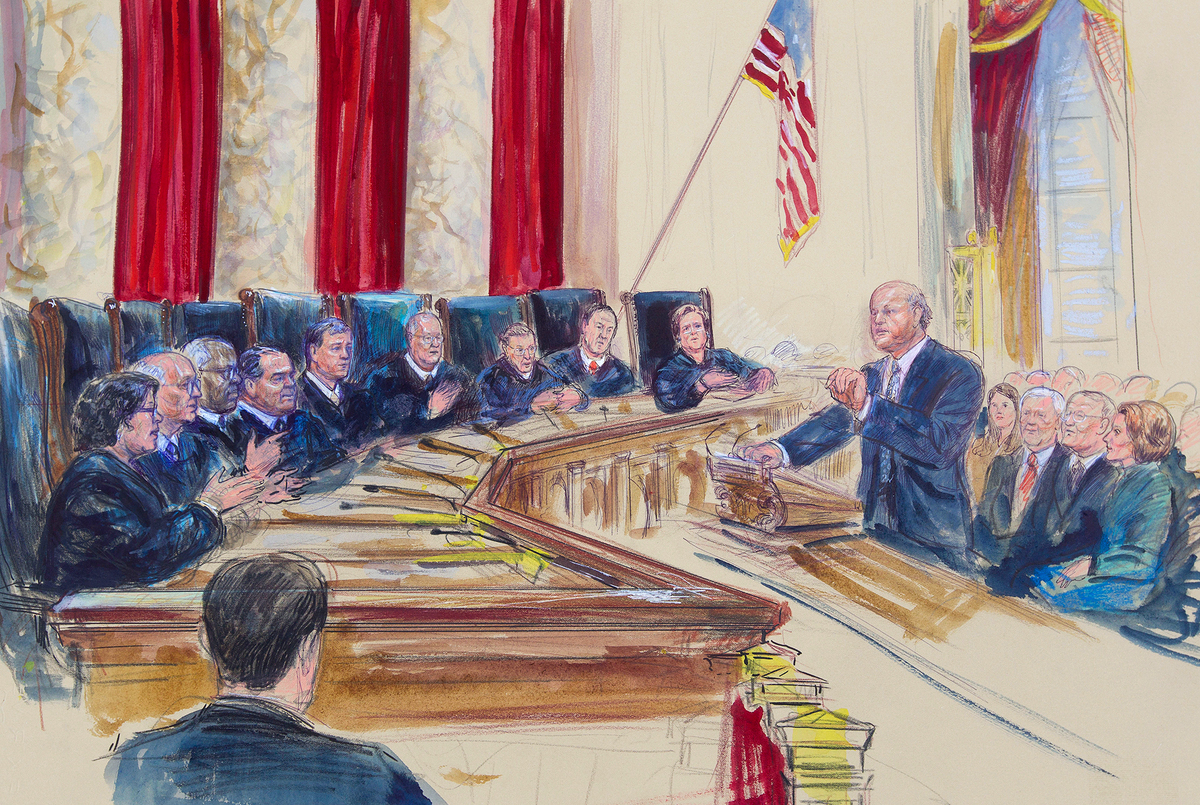 Michael Carvin (right), lead attorney for the petitioners speaking before the Supreme Court in Washington, D.C., on March 4. The justices heard arguments in King v. Burwell.

Online health insurance marketplaces are central parts of the Affordable Care Act. And HealthCare.gov, the federally run exchange, is where 27-year-old Kathryn Ryan, a restaurant server in Philadelphia, turned for health coverage, as soon as the law took effect.

"I was excited because if it weren't for Obamacare, I wouldn't be insured at all," she says. "I wouldn't have the ability to go to the doctor."

She can afford health insurance thanks to a $200 a month subsidy that brings her premium down to $60 a month.

5 Questions Answered On The Legal Challenge To Obamacare Subsidies

Ryan, who's also studying social work, is one of nearly 400,000 Pennsylvanians who have qualified for income-based financial assistance. But like a lot of people, she had no idea that a case before the Supreme Court puts at risk the subsidies in states like Pennsylvania that rely on the federally run exchange.

"You telling me this is, like my heart has sank a bit to the bottom of my stomach, because I was planning on keeping this insurance until I am gainfully employed with an agency that offers benefits," she says.

The reasons Ryan's subsidy and those going to millions of other people nationwide are in jeopardy has to do with a lawsuit before the Supreme Court.

The plaintiffs in the case argue that only those with coverage in state-based marketplaces are eligible for subsidies. If the Supreme Court agrees, Trish Riley with the National Academy for State Health Policy, says it could result in something insurance analysts refer to as a death spiral. "The whole individual market in states could collapse," she says.

Without subsidies, millions of people in the HealthCare.gov states would likely drop coverage. Those most likely to stay would be the really sick people who need expensive care. That change in customers would make insurance "premiums go through the roof," Riley says.

What's At Stake If Supreme Court Eliminates Your Obamacare Subsidy

So how are are the roughly three dozen states with federal marketplaces bracing for this? Not many states are officially declaring they have alternatives.

But Pennsylvania, for one, has a backup plan. "My biggest concern is, do we have a fallback if we need it?" asks Gov. Tom Wolf, a Democrat who took office in January after defeating an incumbent Republican. The state sent a blueprint of the contingency plan to the feds this month.

He stresses the plan is nonbinding and would only be set in motion if the court rules rules the subsidies for federally run marketplaces are illegal.

Teresa Miller, the state's insurance commissioner, says the potential legal setback is "forcing us to put together a plan that frankly most states spent years developing, and essentially we're having to do that in months," she says.

Under the plan Pennsylvania is considering, the state would transition to a model where HealthCare.gov would runs the technology but the state would oversee the funding, regulations and consumer assistance.

Tales From 3 Louisianans Who Got Subsidized Health Insurance

The steps Pennsylvania has taken aren't the norm. "Pennsylvania stands out," said Joel Ario, a consultant with Manatt Health Solutions.

He says many states may be exploring options behind the scenes. But supporting an actual plan at this point "is a political nonstarter" for at least a third of states with federal marketplaces, where the governors and state legislatures opposed the health overhaul.

That's because a backup plan means "standing up and saying, 'I want to work with this law in a public way in a state-based exchange,' " he says.

Arizona even enacted legislation prohibiting a state-based marketplace, with similar bills pending in several other states.

In New Jersey, a Department of Insurance spokesperson says it's too soon to talk about alternative plans.

But neighboring Delaware, like Pennsylvania, has submitted a contingency plan for a state-supported marketplace to the feds, says Rita Landgraf, Delaware's health and social services director.

"Eighty-four percent of those who purchased plans on the marketplace received a financial subsidy, so that is critically important to our constituency that those subsidies are available to them," Landgraf says.

She says the federal marketplace won out over a state design due to the size of the state and the cost of running its own platform. Delaware officials considered a regional marketplace with other states, but it was too complicated.

A decision by the Supreme Court is expected by the end of this month.