Accessibility links
Updated Training Of Birth Control Counselors Boosts Use Of IUDs : Shots - Health News And when the use of intrauterine devices and hormonal implants by young women goes up, the number of unplanned pregnancies sharply drops, researchers find.

Updated Training Of Birth Control Counselors Boosts Use Of IUDs

Updated Training Of Birth Control Counselors Boosts Use Of IUDs 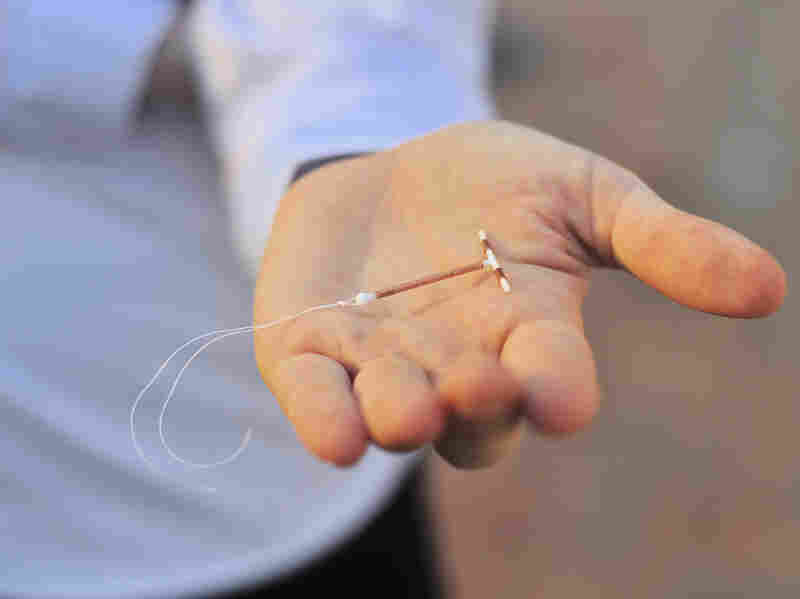 When health care providers have the latest information on various birth control methods, research suggests, more of their patients who use birth control choose a long-acting reversible method, like the IUD. iStockphoto hide caption

Just over half of all pregnancies in America are unplanned.

Yet fewer than 12 percent of women who report using birth control have an IUD or hormonal implant.

Researchers from the University of California, San Francisco had an interesting idea about how to increase that rate. Instead of directly educating women about IUDs and implants, they conducted a study to see if educating health care workers about the latest innovations and statistics regarding contraceptives would make a difference.

It did. Unintended pregnancy rates among young women in the study dropped by almost half.

"Providers were much more likely to counsel them on these highly effective methods — IUDs and implants," says Cynthia Harper, the UCSF professor and family planning researcher who led the study. "Women had demonstrated greater knowledge of these methods. They were more likely to select them." Details of the findings were published Tuesday in the Lancet.

Harper says a number of new contraceptive methods have come out in the last few years, including the hormonal IUD and the contraceptive implant. The training administered in the study helped clinicians understand technicalities of each method, including their benefits, side effects, and which method might be most appropriate for patients with various needs.

UCSF partnered with 40 Planned Parenthood clinics across 15 states in the study. Workers at half the clinics received the latest training about birth control methods; half did not.

Are Pediatricians Prepared To Help Patients Who Want IUDs?

The discussion of IUDs and implants was starkly different in clinics where counselors got the extra training compared to clinics without the training: 71 percent of providers who received training brought up these long-term birth control methods with their patients, versus 39 percent of providers in the control group.

Fifteen-hundred women, ages 18 to 25, were enrolled in the study. They were eligible only if they said they wanted birth control counseling and that they did not want to become pregnant. Those who received counseling from health care workers who had undergone the recent update training on contraceptive methods chose an IUD or implant 28 percent of the time. Only 17 percent of women at the control clinics chose those methods.

Harper says a major barrier for many women in choosing an IUD or implant was cost. IUDs can cost up to $1,000. But they actually are more cost-effective than other methods over time, since their effectiveness lasts for years.

The study was done from 2011-2013, before the Affordable Care Act — and its coverage of birth control — took full effect, and 38 percent of the women studied did not have health insurance.

"I'm hopeful that if the ACA is in place and if women are more likely to be insured for contraceptives, then they'll be able to afford these methods that have higher upfront costs," Harper says.

The pregnancy rate dropped from 15 percent to 8 percent over the course of the study. But for reasons the researchers say they can't explain, that drop only occurred among women who came to the clinic specifically seeking contraception and family planning counseling. There was no change in the pregnancy rate among women who sought birth control after an abortion.

The researchers found that fewer women who wanted to use an IUD or implant after an abortion were actually able to get them. Nearly a quarter of these women were pregnant again within a year.

Only 44 percent of the women who chose IUDs or implants after an abortion actually obtained them, Harper says.

"Now we're looking at why," she says. "What were the restrictions?" Harper notes that there are restrictions in the use of public money for birth control in clinics that provide abortions.