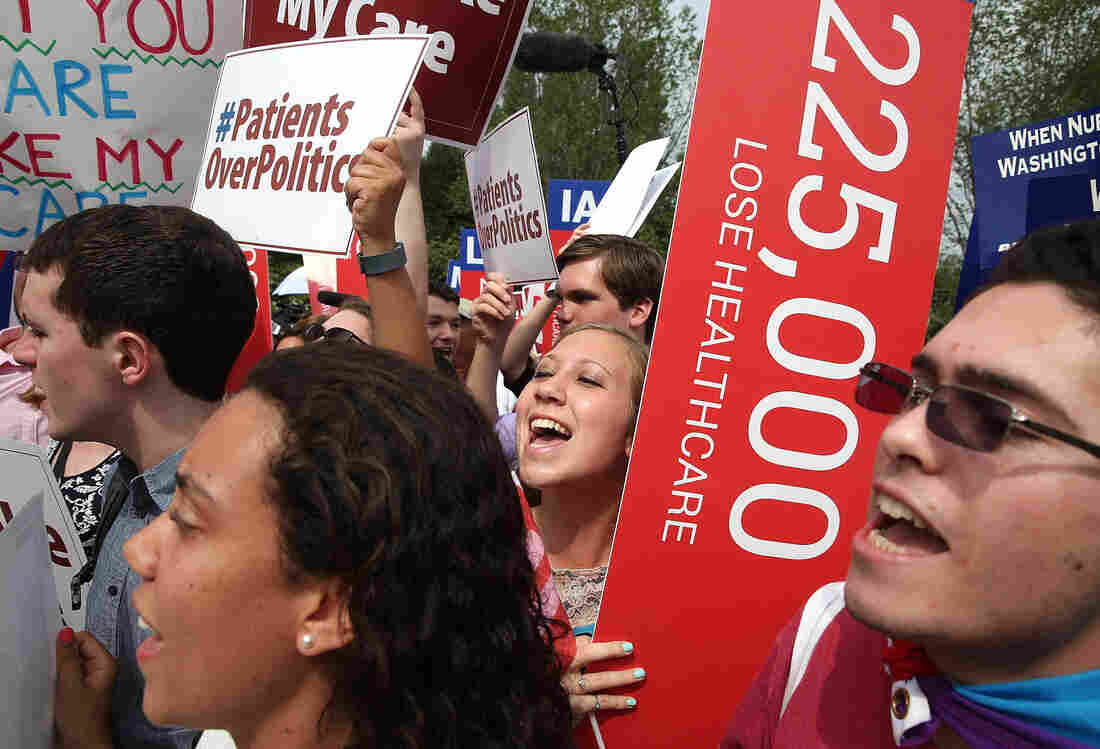 Supporters of the Affordable Care Act cheer outside the Supreme Court in Washington, D.C., after a majority on the court ruled that Obamacare tax credits can continue to go to residents of any state. Mark Wilson/Getty Images hide caption 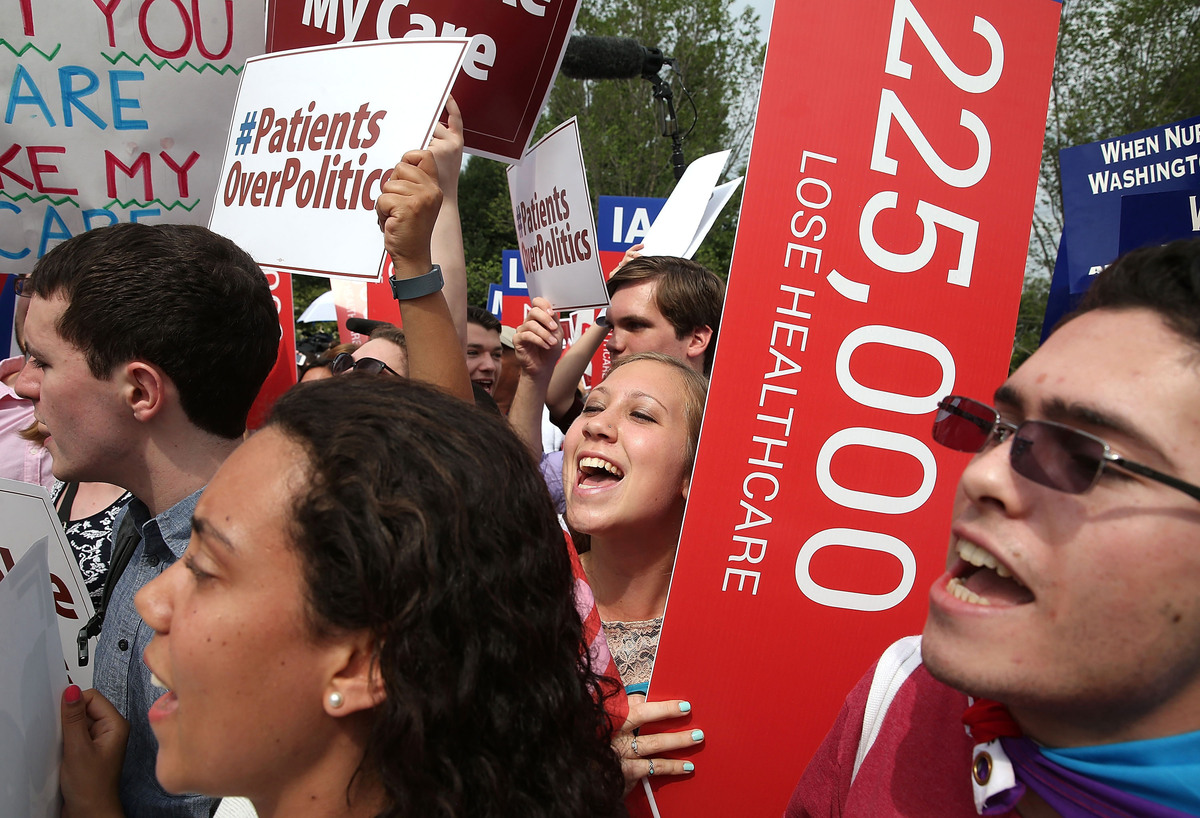 Supporters of the Affordable Care Act cheer outside the Supreme Court in Washington, D.C., after a majority on the court ruled that Obamacare tax credits can continue to go to residents of any state.

The Affordable Care Act survived its second Supreme Court test in three years, raising odds for its survival but by no means ending the legal and political assaults on it five years after it became law.

Congress passed the Affordable Care Act to improve health insurance markets, not to destroy them.

The 6-3 ruling stopped a challenge that would have eliminated subsidies in at least 34 states for individuals and families buying insurance through the federal government's online marketplace. Such a result would have made coverage unaffordable for millions and created price spirals for those who kept their policies, many experts predicted.

"Congress passed the Affordable Care Act to improve health insurance markets, not to destroy them," wrote Roberts. "The combination of no tax credits and an ineffective coverage requirement could well push a State's individual insurance market into a death spiral. It is implausible that Congress meant the Act to operate in this manner."

Consumer advocates were hopeful for this outcome.

"The first thing going on for a huge swath of people is relief that we didn't blow up the system," said Lynn Quincy, a health policy specialist at Consumers Union. "The law was never meant to work without this pillar in there," she said of the subsidies.

But even a victory for the law closely identified with President Barack Obama leaves the health system with incomplete insurance coverage, rising costs and other uncertainties. The ACA itself still faces several lawsuits, although some believe Thursday's decision will discourage judges from advancing the cases.

"It sends a message to the lower courts that they need to take a good, hard look at all the ACA litigation that's out there and probably clean up and get rid of most of it," said Timothy Jost, a law professor at Washington and Lee University and an expert on the health law.

Kaiser Health News interviewed Jost and other authorities before Thursday's decision in a case known as King v. Burwell asking them to explain the implications of upholding the law.

Republicans controlling Congress are likely to advance new legislation amending or repealing the law, although it is even more likely to be vetoed by President Barack Obama if it gets to his desk.

The high court decision sets up the 2016 presidential election as the health law's next big test, although by then it could be difficult to fully uproot even if Republicans take the White House.

"With another year and a half of business as usual under the ACA, if it's a Republican as the next president, it'll be that much more difficult to make changes," said Joseph Antos, a health care economist at the American Enterprise Institute.

The subsidies are available through an exchange "established by the state," according to the law.

Thirty-four states did not set up their own exchanges and rely instead on healthcare.gov, run by the federal government. Lawyers for the plaintiffs argued that, as a result, millions of consumers in those states should not receive tax credits to pay premiums.

Pulling the subsidies would have undermined the insurance market in those states to the point of likely failure, experts said. Unable to afford the coverage, many consumers would have dropped out. Those remaining would probably have been older and sicker, driving up premiums to unsustainable levels.

Eighty-five percent of those who bought insurance through healthcare.gov qualified for subsidies averaging $272 per month. The Department of Health and Human Services predicted 6.4 million people would have lost subsidies if the court ruled for the plaintiffs.

Those subsidies are effectively revenue for hospitals and health insurers, financing premiums and the cost of care. Both industries are relieved they were upheld.

"Providers will feel better," said Peter Strack, a consultant with the Altarum Institute, which works closely with hospitals. "They don't have to worry about this back and forth of, 'Will I have the appropriate population covered?'"

A loss for the administration would have affected employer-based coverage as well, although not nearly as much, benefits lawyers said.

For large employers not offering health insurance, penalties are triggered when workers obtain subsidies in the marketplaces. No subsidies, no penalties, so employers could have dropped coverage without fearing fines.

Although employers are focused on complicated, health-law reporting requirements that take effect this year, their situation changes little in the wake of the decision, said Edward Fensholt, a benefits lawyer with brokers Lockton Companies.

"The working assumption has been, 'We need to offer this coverage to our full-time employees or we're going to risk these penalties,'" he said. "And that's not going to change."

ACA supporters said the lack of a reference to tax credits for the federal exchange was a drafting error and that Congress intended for subsidies to be available regardless of the platform. Lawyers for the plaintiffs said the government must follow the letter of the law.

The health law faces other legal cases, including objections from religious institutions to their role in providing birth control coverage and a suit by the House of Representatives contending that Obama's delay in requiring employers to offer coverage was illegal.

But even if legal challenges to the law disappear, health insurers, doctors and hospitals face broad uncertainty.

Signups for 2015 exchange coverage were lackluster. At the end of March, a little more than 10 million people had enrolled and paid for insurance, less than the 13 million the nonpartisan Congressional Budget Office was projecting last year.

Health costs seem to be creeping up again in a system that is already the most expensive in the world.

In recent years large, self-insured employers have seen health-spending increases of 4 or 5 percent a year, said Dale Yamamoto, an independent actuary who works closely with such companies. So far this year those companies are seeing 6 or 8 percent, he said.

"Everyone I'm talking to — it sounds like they've started to go up this year," he said. "If it's going up for them, it's probably going up on the individual side as well."