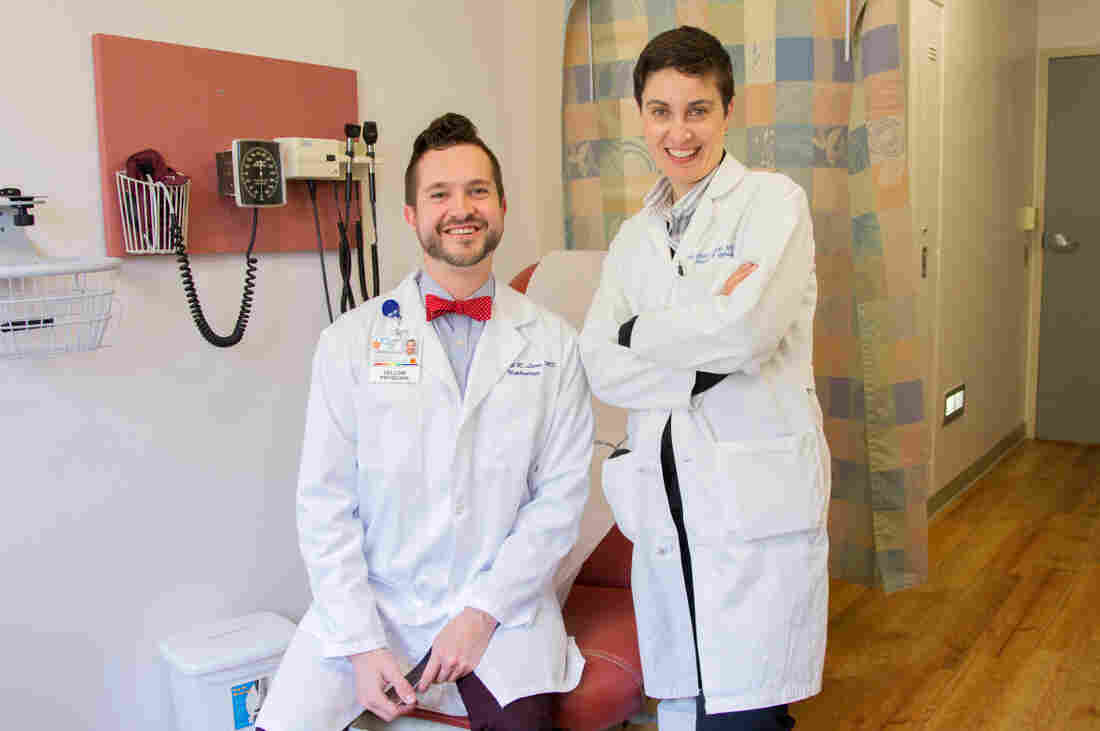 Nephrologist Mitchell Lunn (left) and OB-GYN Juno Obedin-Maliver want to hear about the health issues on the minds of members the LGBTQ community. Susan Merrell/Courtesy of UCSF hide caption 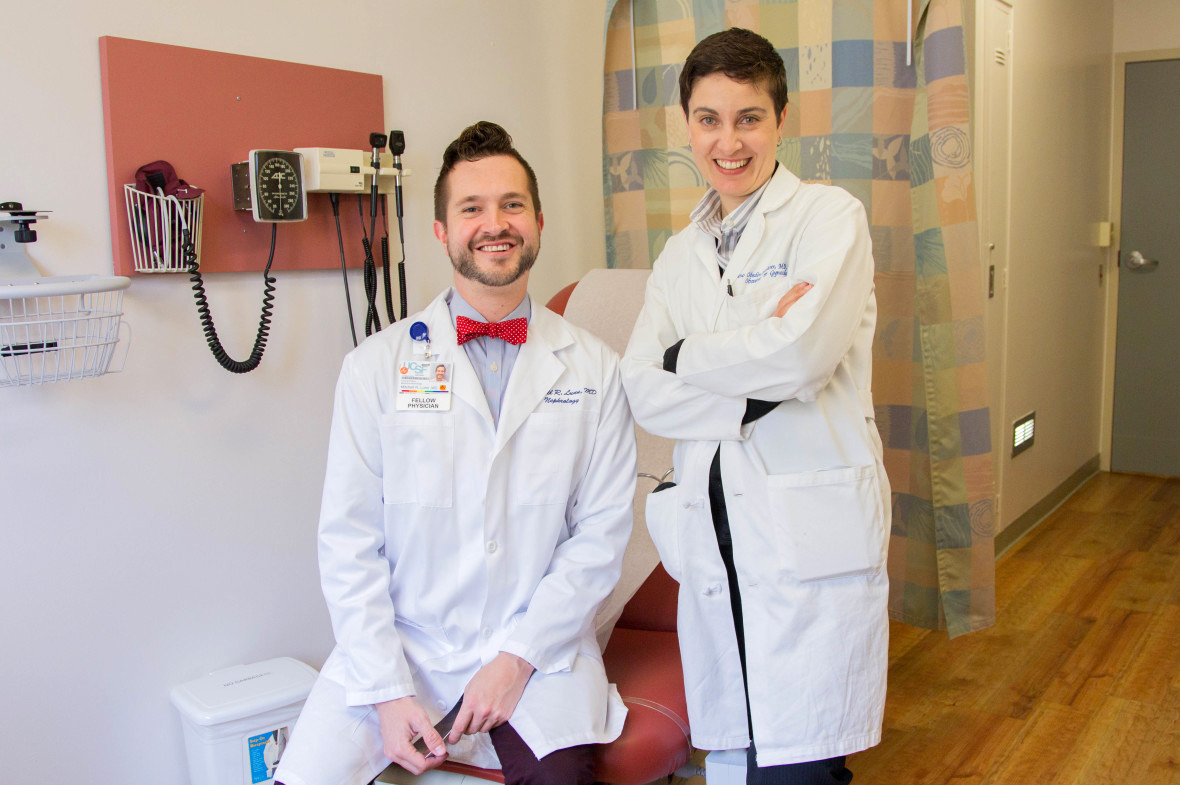 Nephrologist Mitchell Lunn (left) and OB-GYN Juno Obedin-Maliver want to hear about the health issues on the minds of members the LGBTQ community.

Drs. Mitchell Lunn and Juno Obedin-Maliver, both clinical fellows at the University of California, San Francisco, have spent the past decade studying the health problems of people who identify as lesbian, gay, bisexual, transgender and queer.

Their biggest challenge is the lack of population health data about LGBTQ people. The researchers hope that an iPhone app can change that.

The new app, called PRIDE, will ask LQBTQ participants about their health history and concerns. Their answers will inform a longer-term study, which kicks off in January 2016.

After downloading the app, participants are prompted to answer some basic demographic questions and post a topic they would like a researcher to study in the future. They can also see questions or topics that others have posed, which are tagged by category, such as "behavioral health" or "sexual health."

Lunn said he views the first year of the project as a "community listening phase." Next year, the researchers intend to kick off a more rigorous and in-depth study, which will include some of the questions posed by the community.

The app debuted in the App Store Thursday, just ahead of the much anticipated Supreme Court ruling that made same-sex marriage the law of the land.

"We know that there are health disparities, but we don't have the data to drive clinical practice and public health priorities," said Obedin-Maliver, who also practices as a resident physician in obstetrics and gynecology.

For example, about 1 in 3 people from the LGBTQ community smokes, which is a far higher rate than the average U.S. adult population. Therefore, scientists assume that a higher number of LGBTQ people die from cancer and other diseases that are linked to smoking — but they don't have a way to prove it.

Progress has been slow on that front. The Institute of Medicine in 2011 issued a report finding that LGBT people "have unique health experiences and needs, but as a nation, we do not know exactly what these experiences and needs are." It wasn't until 2013 that the Centers for Disease Control and Prevention's annual National Health Interview Survey included a question about sexual orientation.

The researchers found support for their app from Apple employees, who helped connect the team with a mobile design firm.

Apple CEO Tim Cook has emerged as an outspoken advocate of LGBTQ rights. In a Bloomberg BusinessWeek op-ed published last October, Cook said he doesn't consider himself an activist but is "proud to be gay."

The PRIDE app connects with Apple's ResearchKit service, which makes it easier for clinical researchers and developers to develop mobile apps that gather data from participants — with their consent.

The first five ResearchKit apps focused on Parkinson's disease, breast cancer, diabetes, asthma and heart disease. This is the first ResearchKit-powered app that aims to gathering data about population health, rather than a specific disease.

"When Apple launched ResearchKit [last month], we reached out to the team at Apple to ask whether we could think about modifying it to make it more of a tool to engage the community," Lunn explained. "They were very excited."

Some potential participants may be concerned about sharing their sexual orientation and gender identity with an app. Lunn said they built the app with security and privacy in mind — it is HIPAA-compliant and includes "military-grade encryption," he said.

The data will only be available to researchers from UCSF for now. But it may later be shared with researchers in an "aggregate and de-identified way," meaning first name, Social Security number and contact information won't be visible.

Lunn and Obedin-Maliver say this is the first national public health study focused on LGBTQ people.

Other researchers say this kind of data would help fill a void. National cancer registries, such as one called "SEER" for short, don't include questions about sexual orientation and gender identity.

"I really need this data," said Liz Margolies, founder and executive director of the National LGBT Cancer Network. "The federal government should be making sure this data is collected, but it takes years. In the meantime, it is very difficult to get funding."

The UCSF study will also investigate some of the discrimination that LGBTQ people face during their treatment. Recent research found that 55 percent of lesbian and gay patients and 70 percent of transgender patients felt they had experienced discrimination or substandard care.

"In order for the community to thrive — not just survive — we need to incorporate LGBTQ people into all facets of life, including health and research," said Obedin-Maliver. "We need to understand their needs in their own words and voices."