Accessibility links
Texas Defends A Woman's Right To Take Her Placenta Home : Shots - Health News Texas now explicitly allows the placenta to be taken home after giving birth in a hospital. It came about at the urging of people who feel consuming dried and encapsulated placenta helps new mothers. 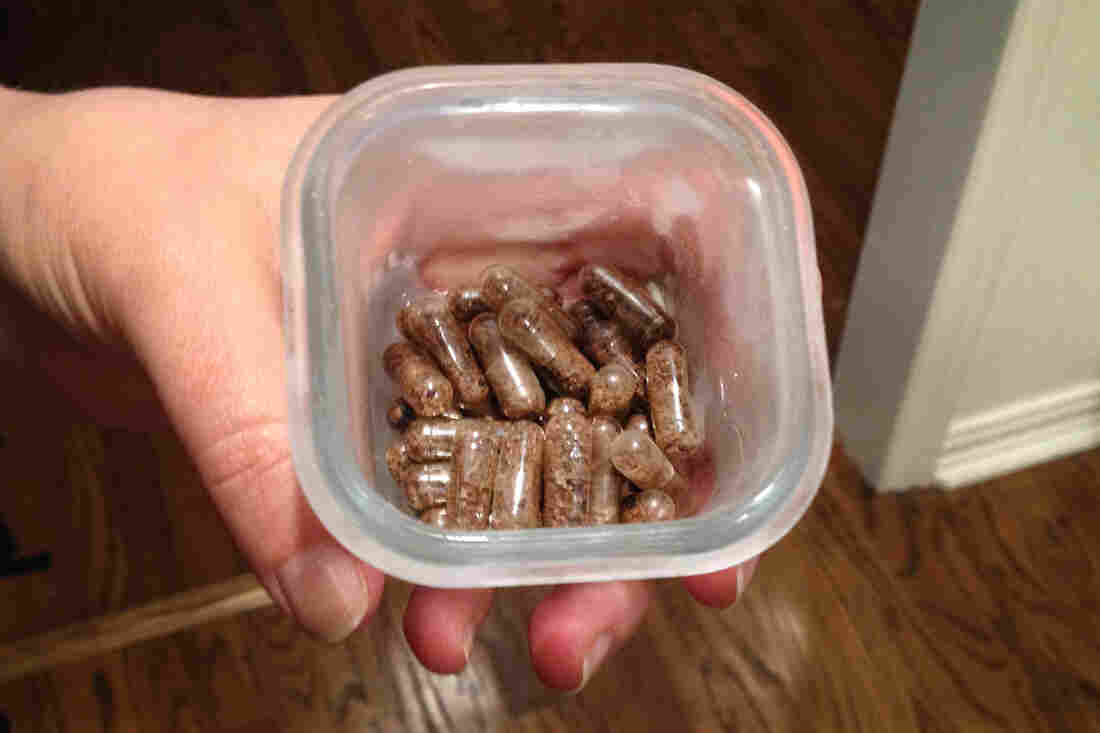 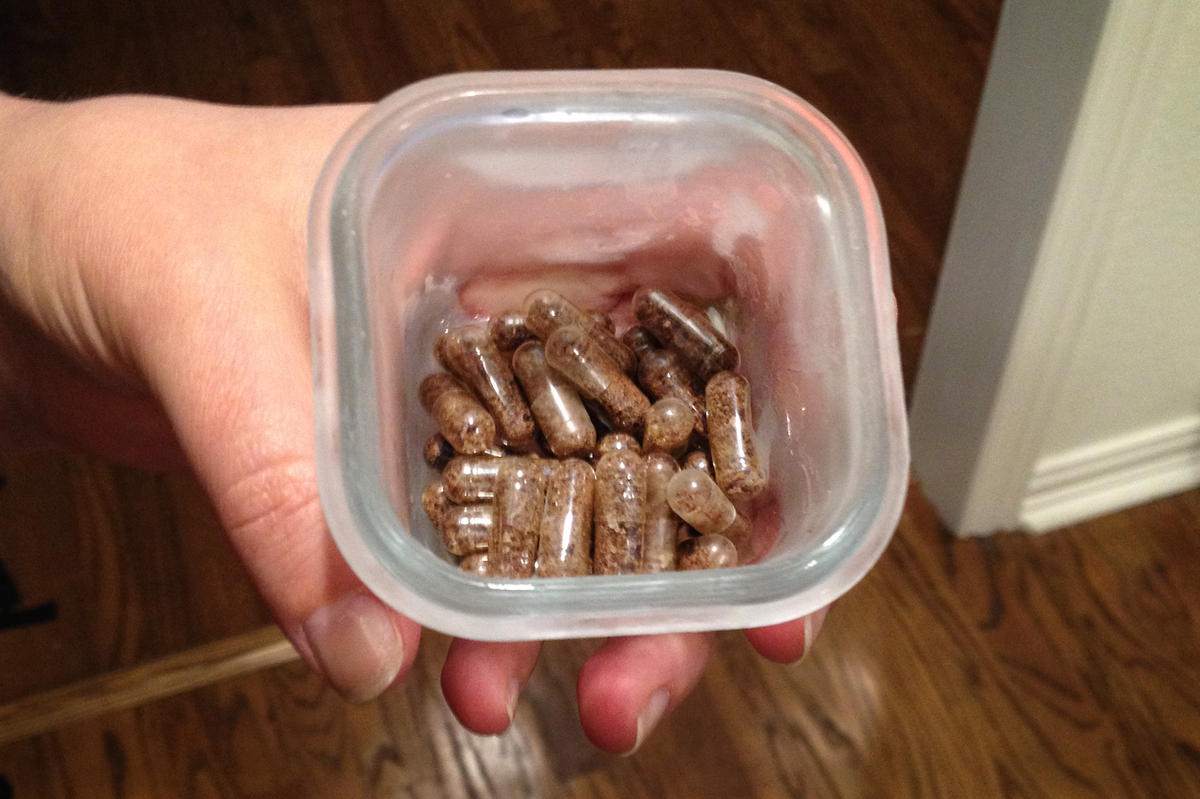 After giving birth, some women save the placenta in order to consume it in the following weeks. In fact, Texas just passed a law giving women the right to take the placenta home from the hospital, the third state to do so.

Science doesn't support a lot of the claims of its purported benefits. But for Melissa Mathis, it's about her rights. Last year she had her baby, Betsy, in a Dallas hospital. When Mathis took Betsy home, she wanted to take the placenta home, too.

"As far as I was concerned it was a part of my body that was in my body. So it wasn't like something, it didn't really feel that strange to me," Mathis says.

Like many women, Mathis had heard through friends about eating a little placenta every day in the weeks after giving birth.

The placenta, sometimes called the afterbirth, is typically dehydrated, ground up and put into edible capsules. Many midwives and doulas believe that because the placenta grows along with the fetus, it contains hormones and nutrients that can help a woman recover from childbirth.

Some say it helps women breastfeed or can prevent postpartum depression.

"It's hard for me to know what the effects were because I don't have anything to compare it to," she says, "But I had great success breastfeeding, I had no problems with emotional instability. I definitely feel that it helped me."

Mathis says the hardest part was just getting her placenta in the first place.

Texas classifies placentas as medical waste. And hospitals have liability concerns because placentas could carry infectious disease. Mathis says she spent months during her pregnancy communicating with hospital administrators about arranging custody of her placenta when the time came, but she says the answers she got were too vague. 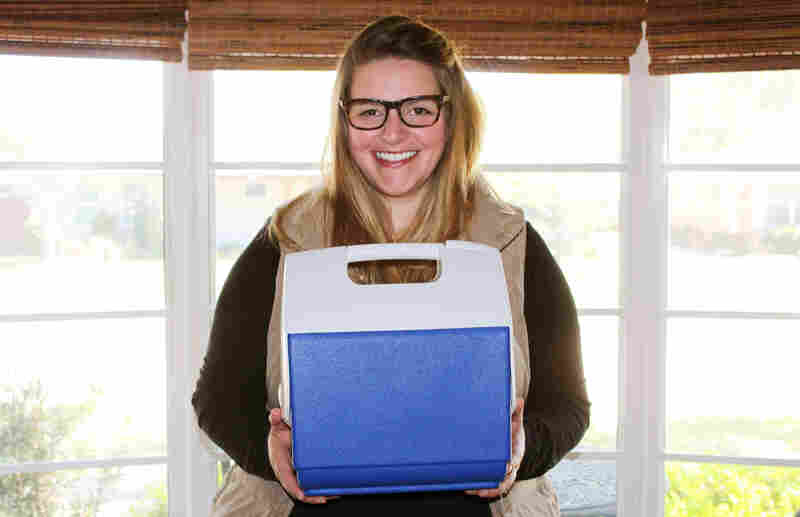 Melissa Mathis holding the cooler she used to smuggle her placenta out of the hospital. Carrie Feibel/Houston Public Media hide caption 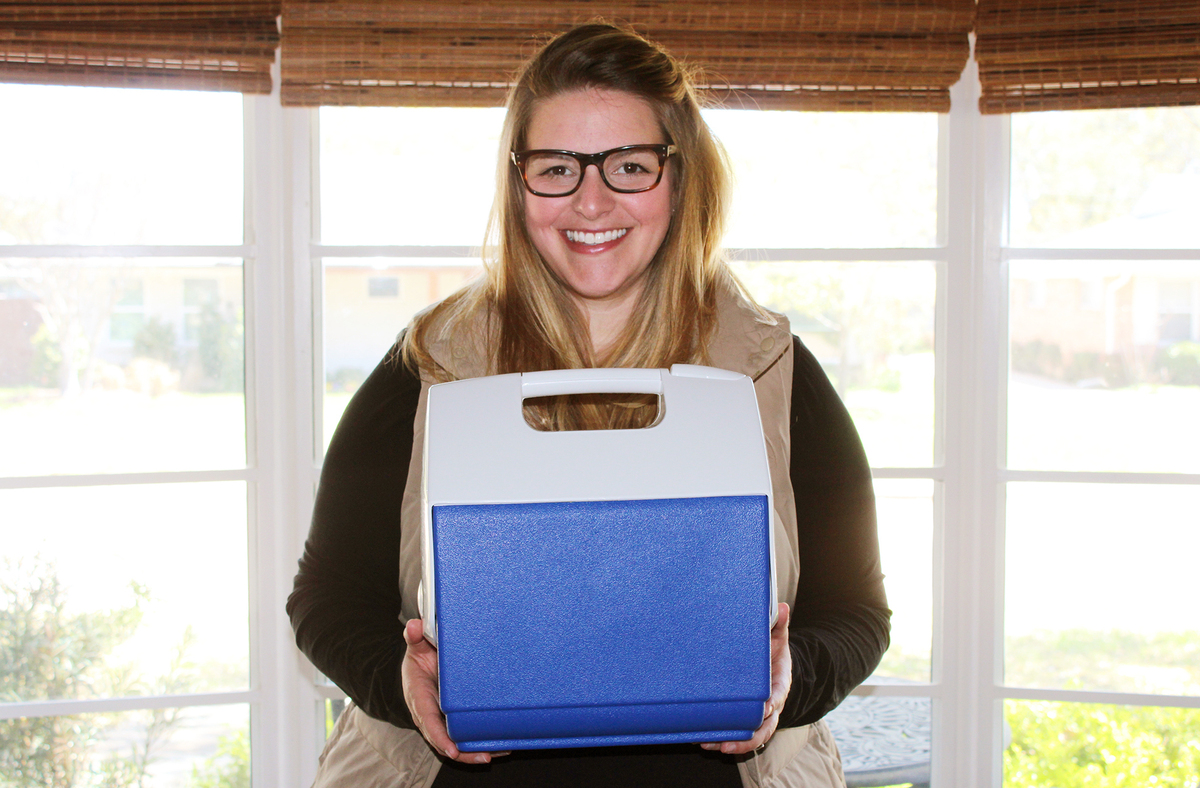 Melissa Mathis holding the cooler she used to smuggle her placenta out of the hospital.

So when Betsy arrived, Mathis and her husband waited until nobody was looking.

"And we were able to grab it, and we got it and put it in a cooler and threw it in a backpack and my husband handed it off to the placenta handler in the lobby of the hospital and that's not ideal. And, in my opinion, that's not acceptable."

Mathis talked about it with her state representative, Dallas Republican Kenneth Sheets.

"It seemed like an issue that involves freedom and liberty and just a basic right and we just decided we'd take it on," he says.

Sheets wrote the new law that allows women to keep placentas, if they sign a waiver and don't test positive for infectious disease.

Texas is the third state in less than a decade to put a placenta law on the books. The first were Hawaii and then Oregon.

And yet doctors say there's no scientific evidence behind all the health claims. Some women say the placenta helped them, but researchers say it's probably just a placebo effect.

"We don't have any studies on this," says Dr. Catherine Spong, deputy director of the National Institute of Child Health and Human Development.

Spong is much more interested in how the placenta functions during pregnancy, not after.

"The placenta is really the lifeline. It serves as the baby's lungs, the baby's kidney, it has functions of the liver, of the GI tract," Spong says. "Interestingly, it also has immune functions and endocrine functions."

Spong says her institute will spend $44 million on placenta research over the next few years. She says she doesn't feel comfortable offering an opinion on moms who eat placenta, simply reiterating that science doesn't support it.

But Mark Kristal does have an opinion.

Kristal is a behavioral neuroscientist with the State University of New York at Buffalo. He's been studying placenta eating in mammals for 43 years.

In fact, many women point to this fact as evidence that humans should do it too.

But Kristal says not so fast. The reason many mammals do it is because there's a chemical he discovered in amniotic fluid and placenta that provides pain relief during birth.

"It boosts the effectiveness specifically of opioid or opiate painkillers," he says.

So wouldn't this work in humans?

Kristal says the chemical is also in human the placenta but it's fragile. Cooking and encapsulating the placenta would actually destroy it.

Kristal says eating it raw isn't a good idea either. Since placentas are also filters, there may be waste products in our placenta that are harmful or toxic.

In fact, he believes humans have evolved away from eating placenta.

"It's not a routine human behavior. On the contrary, there are a lot of cultures that have developed taboos against doing it," he says.

Kristal speculates evolution has provided women with something else to deal with the pain of childbirth. And that's the company of other people.

Most mammals that eat placenta give birth unassisted. But humans don't.

"The advantage of socially assisted birth is not only to help the mother but also to pass information about childbirth from older more experienced women to younger less experienced women who might be helping," Kristal says. "The human data bank grows by this social experience."

Dallas mom Melissa Mathis says she's open to hearing more science about the placenta. But until then, she wants to decide for herself.

"I feel like it's a personal liberty issue. It's our freedom to choose what we're going to do with our own bodies," she says.