Accessibility links
Can Technology Ease The Burden Of Caring For People With Dementia? : Shots - Health News Things like activity trackers and sensors might make it easier to keep people with dementia safe and help caregivers. Researchers are going to test that idea in the real world. 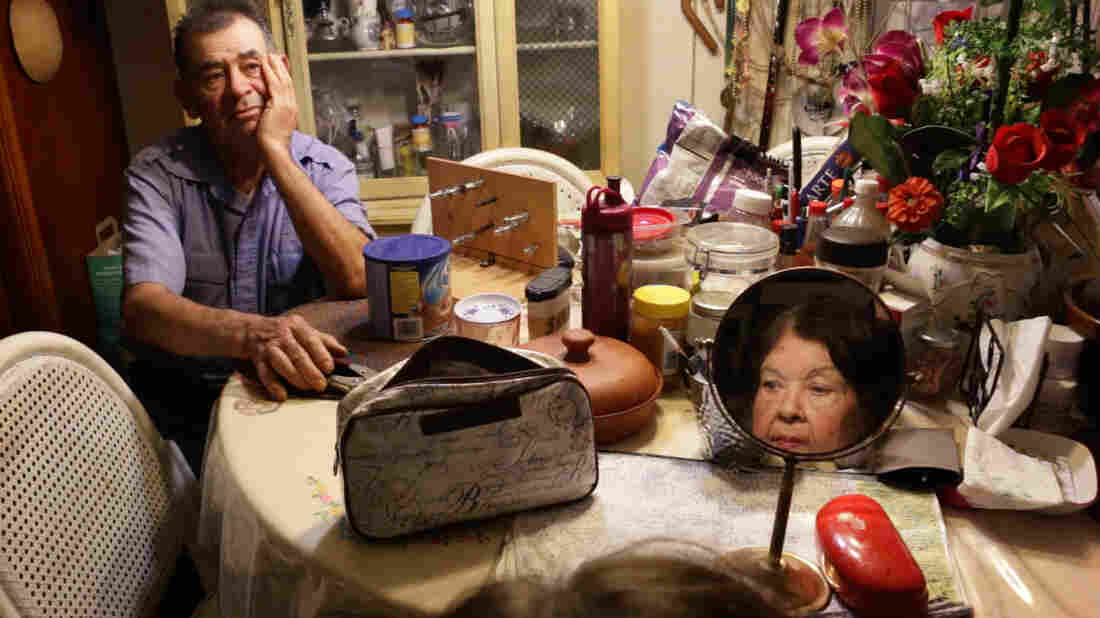 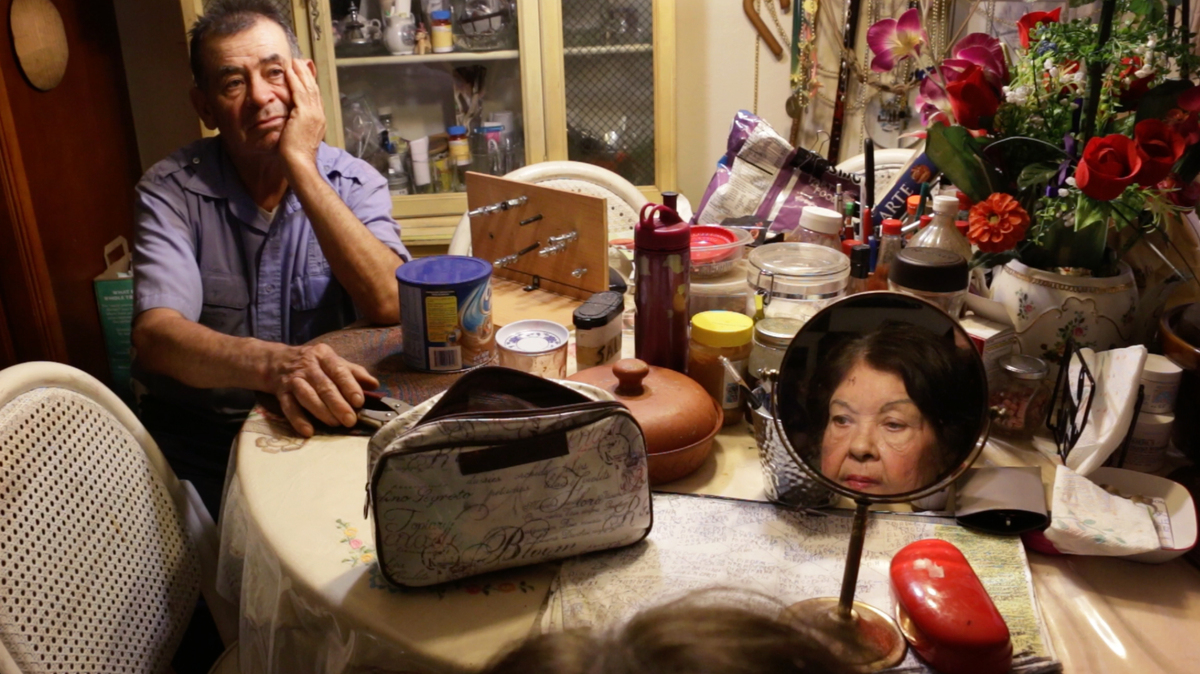 Arturo Martinez watches his wife, Aurora Martinez, put on makeup in their San Rafael, Calif., home. She has Alzheimer's.

A doctor I interviewed for this story told me something that stuck with me. He said for every person with dementia he treats, he finds himself caring for two patients. That's how hard it can be to be a caregiver for someone with dementia.

The doctor is Bruce Miller. He directs the Memory and Aging Center at the University of California, San Francisco. According to Miller, 50 percent of caregivers develop a major depressive illness because of the caregiving. "The caregiver is so overburdened that they don't know what to do next," he says. "This adds a huge burden to the medical system."

This burden is going increase dramatically in the coming decade. By 2025, 7 million Americans will have Alzheimer's disease, according to one recent estimate. Millions more will suffer from other types of dementia.

Together these diseases may become the most expensive segment of the so-called "silver tsunami" — 80 million baby boomers who are getting older and needing more medical care. The cost of caring for Alzheimer's patients alone is expected to triple by 2050, to more than $1 trillion a year.

So UCSF, along with the University of Nebraska Medical Center, is beginning a $10 million study funded by the federal Centers for Medicare & Medicaid Innovation. Researchers plan to develop a dementia "ecosystem," which aims to reduce the cost of caring for the growing number of dementia patients and to ease the strain on caregivers.

That includes caregivers like Maria Martinez, 42, who visits her parents' small apartment in San Rafael, Calif., almost daily to help care for her mom, Aurora Martinez, who has Alzheimer's.

Maria Martinez is an only child with a partner and a full-time job as an occupational therapist. But nearly every day she spends at least a couple of hours with her parents, managing a long list of responsibilities that are critical to their ability to live independently.

"Does she have a doctor's appointment?" Martinez says. "Are there enough diapers? Clothing? Laundry. Financial stuff, I manage that too."

She bathes her mother, who is 78, manages upkeep on the apartment, does much of the shopping and fills prescriptions for both of her parents.

Especially in the early stages of Aurora's illness, practical concerns loomed large. Sometimes she would wander in the middle of night. Her husband, Arturo Martinez, 75, took to sleeping on the floor in front of the door, worried Aurora might end up falling in the street and being hit by a car.

Eventually, Martinez installed a lock at the top of the door where Aurora couldn't reach it, and a wind chime to serve as an alarm.

Though the Martinezes are not part of the study, they are the kind of family that the dementia ecosystem study is designed to help.

The study will enroll 2,100 patients at the two sites. Each patient will have a navigator, a nonmedical staff person who will coordinate care and triage calls, so minor issues don't land patients in the ER.

Some patients will also receive activity trackers and sensors, which will be placed around the house or worn on the patient's wrist. Much like Martinez's wind chimes, the idea is to see whether sensors can detect when a patient is wandering off or if they've been inactive for too long.

A few weeks ago, in a sunny conference room at UCSF, techies and doctors, almost all of whom have had family members with dementia, sat around a table, brainstorming other ways technology might be applied to dementia care.

"There are safety issues like leaving the stove on," suggests Katrin Schenk, who teaches physics at Randolph College in Virginia.

"You could easily put in a temperature sensor that knows they went in there and turned on that burner," Schenk says. "It's been on for two hours — someone needs to do something."

Or, she continues, what about the roughly one third of dementia patients who also have diabetes? Could Bluetooth-enabled blood-sugar monitors allow family members and medical staff to check up on them remotely?

If this all sounds intrusive, says Kate Possin, a neuropsychologist at UCSF, consider the alternative: anxious adult children, and parents who end up in nursing homes sooner than they want to.

"This may be a compromise for them," Possin says. "'If I use this system, then my son who lives three hours away feels comfortable and safe with me living at home a little bit longer.'"

A handful of tech start-ups are making the same case. In San Francisco, Lively markets a system of networked sensors and a watch that can pick up on activity around the house and let family members or care providers know if there's a worrisome change.

These kinds of products, which let doctors and caregivers check up on patients remotely, make sense for some cases, Schenk says.

But do they help in the long run?

"I know for sure no one's gotten the data and proven that [this technology] works," Schenk says. "Proven that it improves peoples' health, improves caregiver burden."

"Delays the entrance into a nursing home," finishes Schenk.

Researchers will also want to see whether sensors and other technologies are helpful for people in later stages of dementia like Aurora Martinez or whether they just create more hassle.

Possin says they hope to have some preliminary results next January.