Accessibility links
Supreme Court's Decision On Same-Sex Marriage Expected To Boost Health Coverage : Shots - Health News Many companies are expected to expand coverage to same-sex spouses if they already offer benefits to opposite-sex spouses. But the recent Supreme Court decision doesn't require them to do so. 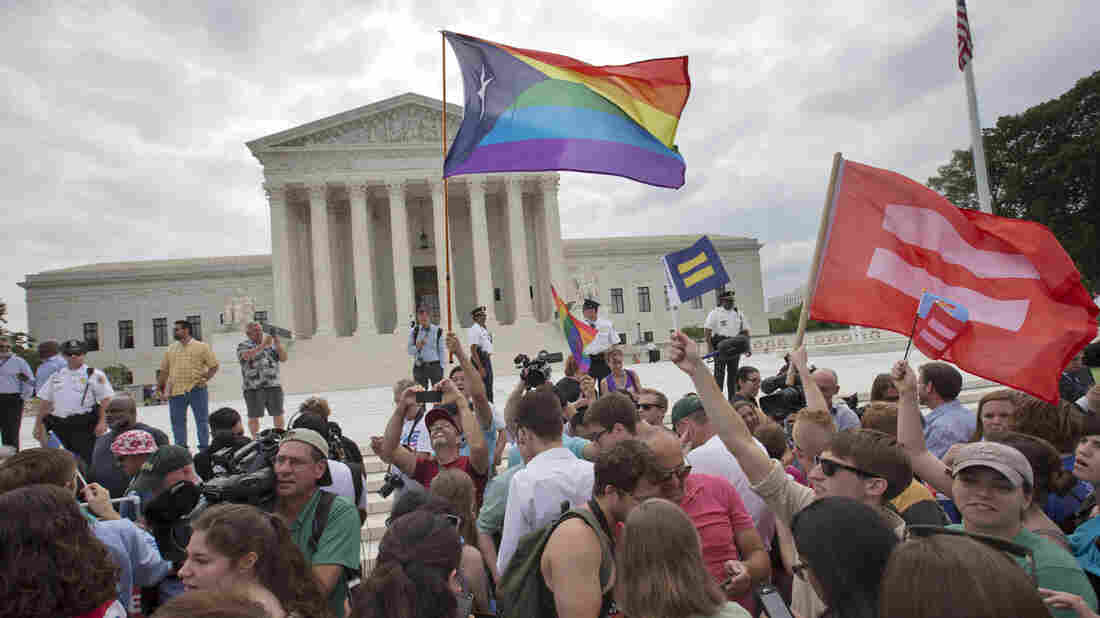 The crowd reacts as the ruling on same-sex marriage was announced outside of the Supreme Court in Washington, D.C., Friday. Jacquelyn Martin/AP hide caption 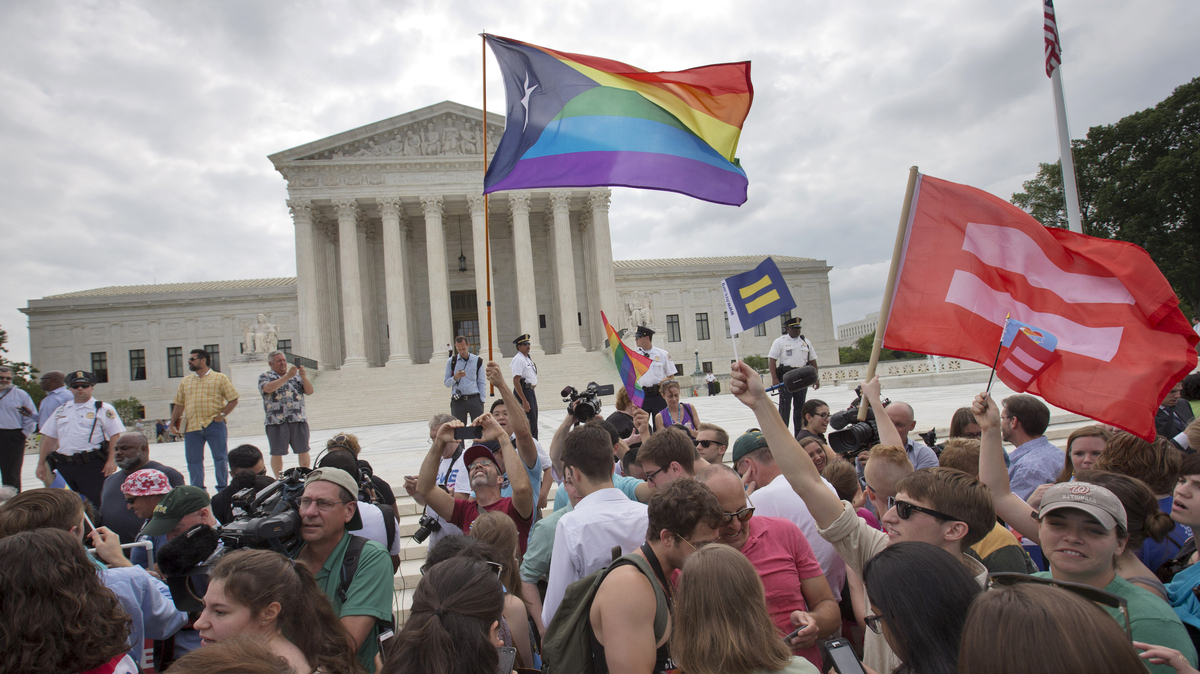 The crowd reacts as the ruling on same-sex marriage was announced outside of the Supreme Court in Washington, D.C., Friday.

The right to marry in any state won't be the only gain for gay couples from last week's Supreme Court ruling. The decision will likely boost health insurance among gay couples as same-sex spouses get access to employer plans.

The logic is simple. Fewer than half of employers that offer health benefits make the insurance available to same-sex partners who aren't married. Virtually all of them offer coverage to spouses.

By marrying partners with employer health plans, people in same-sex relationships are likely to get coverage in states that banned gay marriage until now, as well as in those that welcomed it. Thanks to rapidly shifting legal ground, 37 states recognized gay marriage before last week's ruling, up from nine in 2012.

New York legalized gay marriage in 2011. The next year, there was a big increase in same-sex couples covered by employer-sponsored health insurance, according to a study published Friday by JAMA, a journal of the American Medical Association.

Although the court found a constitutional right to same-sex marriage, lawyers gave mixed messages on whether employers must now offer health insurance to same-sex spouses if they offer it to opposite-sex spouses.

Edward Fensholt, a benefits lawyer with brokers Lockton Companies, expects most companies to cover same-sex spouses if they already offer benefits to opposite-sex spouses. But the decision doesn't require them to, he said.

"Employers get confused about this," he said. "They'll see that ruling and they'll start to think they have to offer coverage to same-sex spouses."

"You should be able to add your [same-sex] spouse to your health insurance," Lamba Legal and other civil rights groups wrote in an online FAQ.

Big companies also like the simplification the ruling brings to their human resources departments.

"We're relieved because this basically means you won't have to do a state-by-state analysis" of how the law applies to same-sex couples, said Gretchen Young, senior vice president of health policy at the ERISA Industry Committee, which represents very large employers. "We always want uniform treatment."

Weirdly, a constitutional right to same-sex marriage may harm some same-sex couples: those with domestic-partner benefits who don't want to get married.

Last year Verizon told same-sex partners in states where gay marriage is legal they had to wed if they wanted to qualify for benefits. Now that the high court has placed same-sex and opposite-sex marriage on the same level, other companies are likely to follow, say benefits specialists.

"We would certainly expect to see a falloff in domestic partner benefits," said J.D. Piro, a health benefits lawyer with Aon Hewitt, a consulting firm. "Given the decision, employers might want to be asking, do we still need to do that?"