Accessibility links
Buy A Meth House Unawares And Pay The Health Consequences : Shots - Health News The residue from meth labs can cause health problems, but people aren't always told that the house they're buying is contaminated. An Indiana law requires disclosure but not mandatory testing. 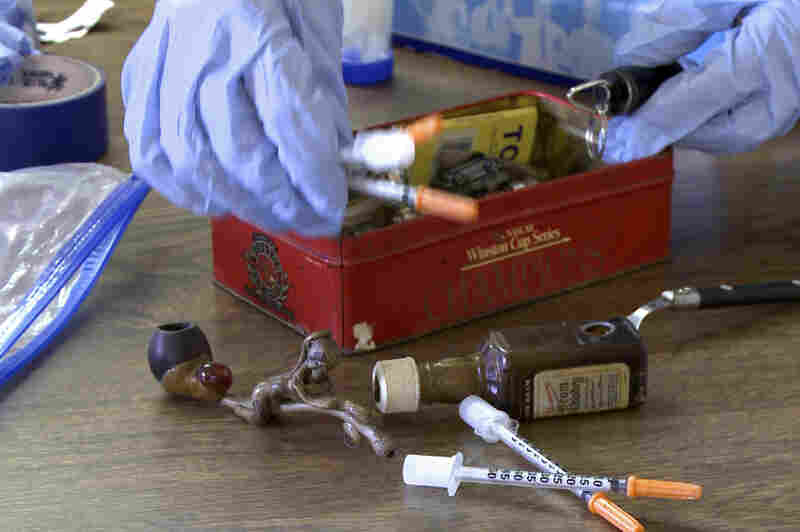 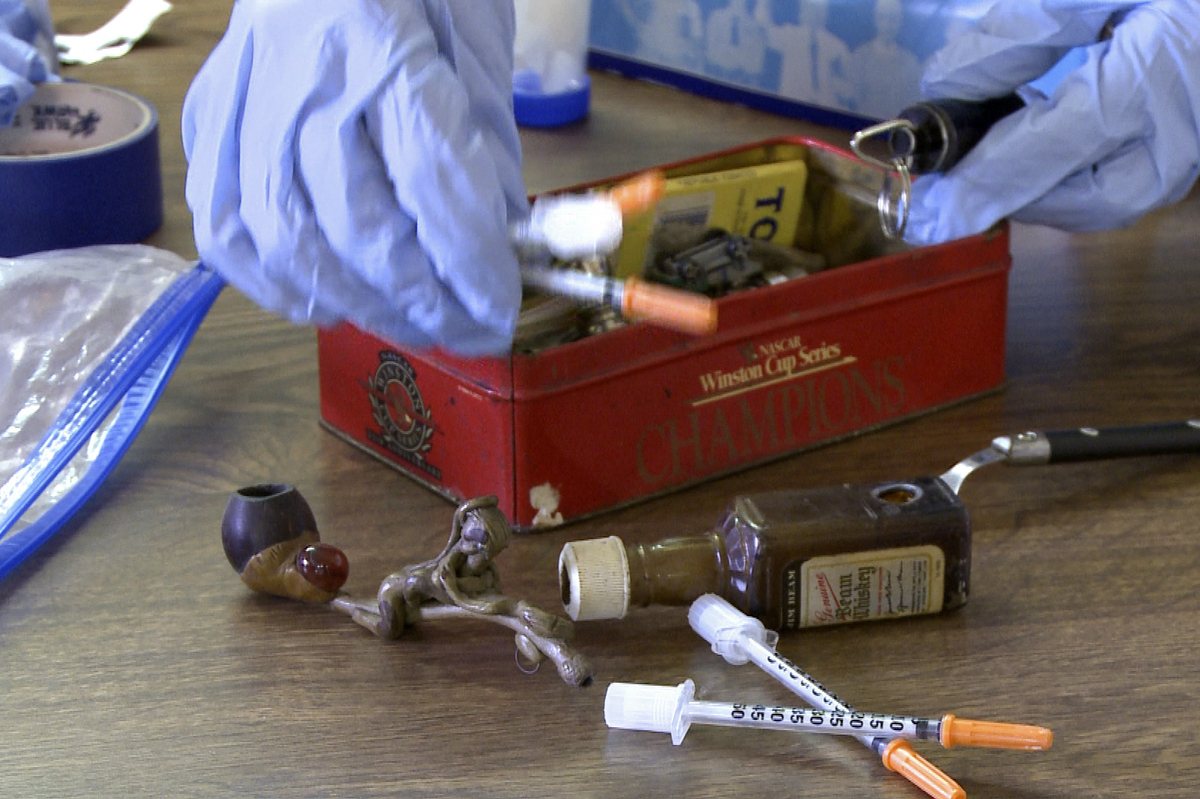 Donetta Held unloads needles and pipes confiscated from a contaminated meth home. She owns an environmental decontamination company and says meth tests are their most demanded service.

Jennifer Nugent and her three kids are throwing a big, blue ball around in the small living room of their rental home.

The kids are happy, but Nugent isn't. She planned to raise them in a place with much more room to play.

And she was. That is, until she learned that home was uninhabitable.

Two years ago, she and her husband bought a country home in the small central Indiana town of Mooresville.

"It was blue and it had a lot of potential for us to add on," she says. "We really, really wanted that house."

But shortly after the Nugent family moved in, their dream home became a nightmare. 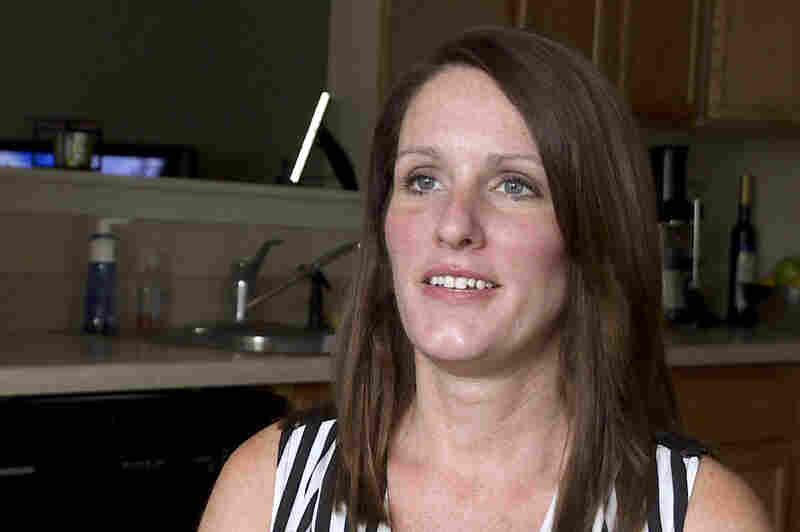 Jennifer Nugent, who discovered the house she bought in Mooresville, Ind., had been used as a meth lab, wants the state to require methamphetamine tests on all houses for sale. Barbara Brosher/WFIU hide caption 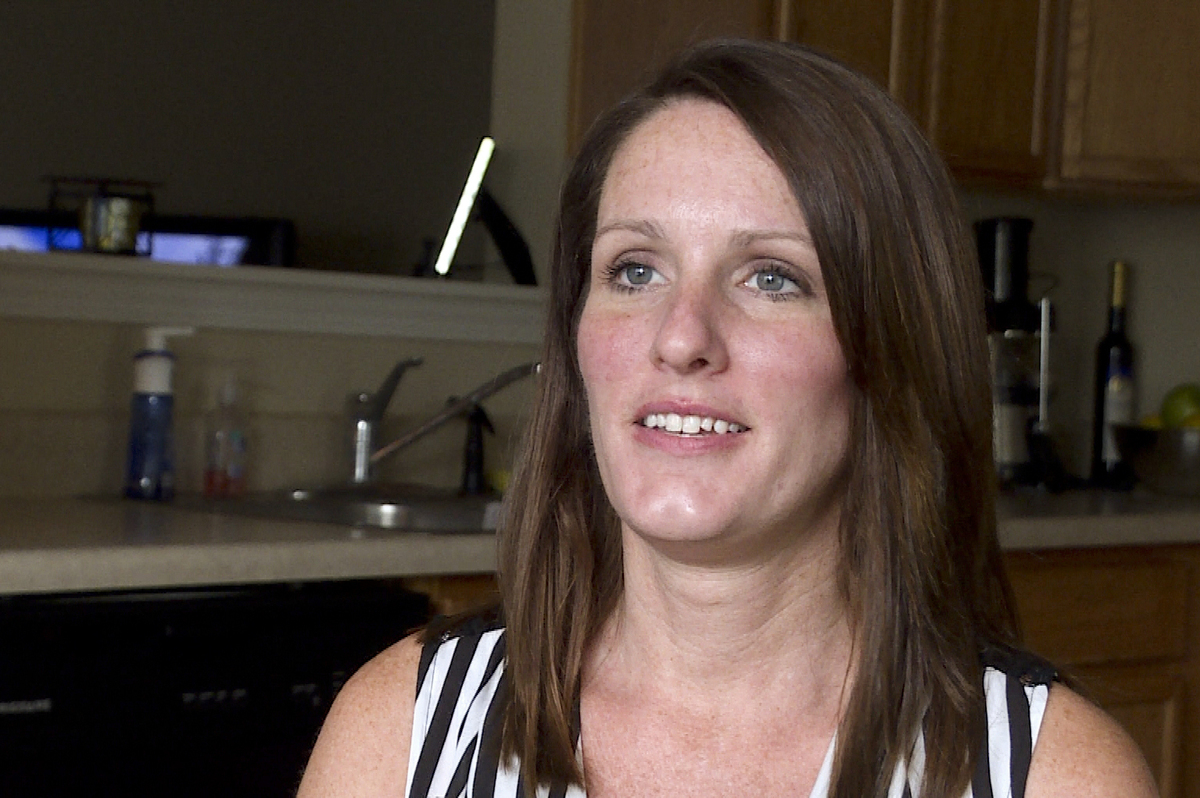 Jennifer Nugent, who discovered the house she bought in Mooresville, Ind., had been used as a meth lab, wants the state to require methamphetamine tests on all houses for sale.

The kids were constantly sick and struggling to sleep. The Nugents puzzled over their children's health problems until a neighbor mentioned that the previous homeowner referred to the bathroom as his "smoke shop."

That's when Nugent paid $50 for a methamphetamine test. The first test revealed meth levels three times the legal limit. When meth is smoked, dangerous chemicals are released into the air that can cling to clothing, carpets and walls.

State police here have busted more than 11,000 meth labs since 2007. Indiana leads the nation in the number of meth lab seizures, causing hundreds of homes to be contaminated with dangerous chemicals each year.

Contaminated houses are listed on the state's public online database and properties are removed from the list only after they've been cleaned by a qualified inspector. The Drug Enforcement Administration keeps a national registry that logs the locations of known contaminated homes as reported by law enforcement.

Lori Endris, who heads a drug testing lab for the state of Indiana, says that doesn't mean people can still end up living in a contaminated house without realizing it.

"If you look at the numbers of properties versus the numbers that have been properly cleared by a qualified inspector, you're talking an [8,000-] to 9,000-house difference and I don't believe that all of those are sitting empty," she says.

Just like checking a box to indicate if there's lead or asbestos on a property, homeowners must disclose whether meth was manufactured there. Just over half of states have similar disclosure laws.

But, of course, they depend on the seller's honesty.

"I field a lot of calls from Realtors wanting to know if a property has been cleaned or cleared because people aren't wanting to tell the truth," Endris adds.

Meth tests are the company's most in-demand service, according to Donetta Held, the firm's owner.

"We'll do a floor, a ceiling and two walls. And we'll take a pre-wetted alcohol wipe and we'll wipe within that square, put that in the jar. We label that 'came from the kitchen' and we do that in each room and we overnight that to the lab," she says. "They analyze how much meth, if any, is in that."

It can cost tens of thousands of dollars to decontaminate a property.

That means some people just don't bother, leaving behind dozens of toxic chemicals that can contribute to lasting health problems.

In her case, she says the previous homeowner didn't disclose that meth was in the home.

"You're relying on a criminal to disclose his criminal acts to a buyer and lose the sale," she says. "So I don't think that's enough."

Nugent wants the state to require homeowners or real estate agents to have methamphetamine tests performed on all listed properties.

Even after having it decontaminated, the Nugent family decided to sell their dream house. As a result, they took a significant financial loss.