Accessibility links
'No One Should Have The Right To Prolong My Death' : Shots - Health News Jennifer Glass was a newlywed when she was diagnosed with inoperable lung cancer. "I'm doing everything I can to extend my life," she says, while advocating for a right-to-die law in California. 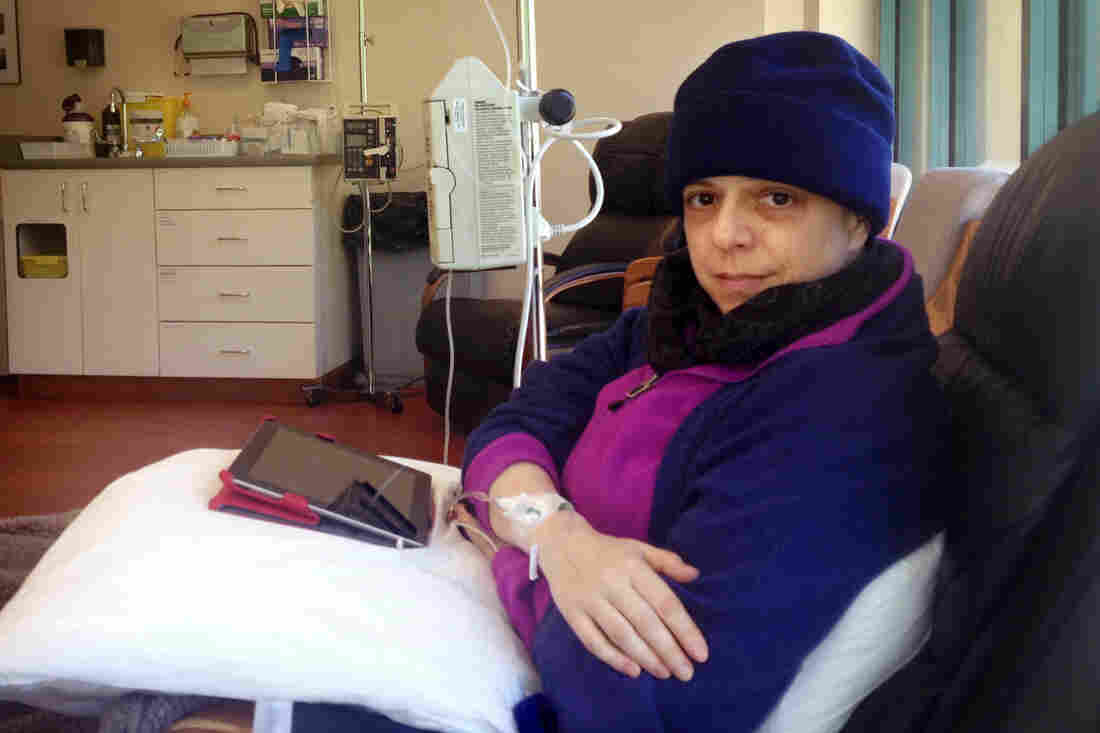 Jennifer Glass found out she had lung cancer four months after she got married. Here, her first round of chemo in February 2013. Courtesy of Jennifer Glass hide caption 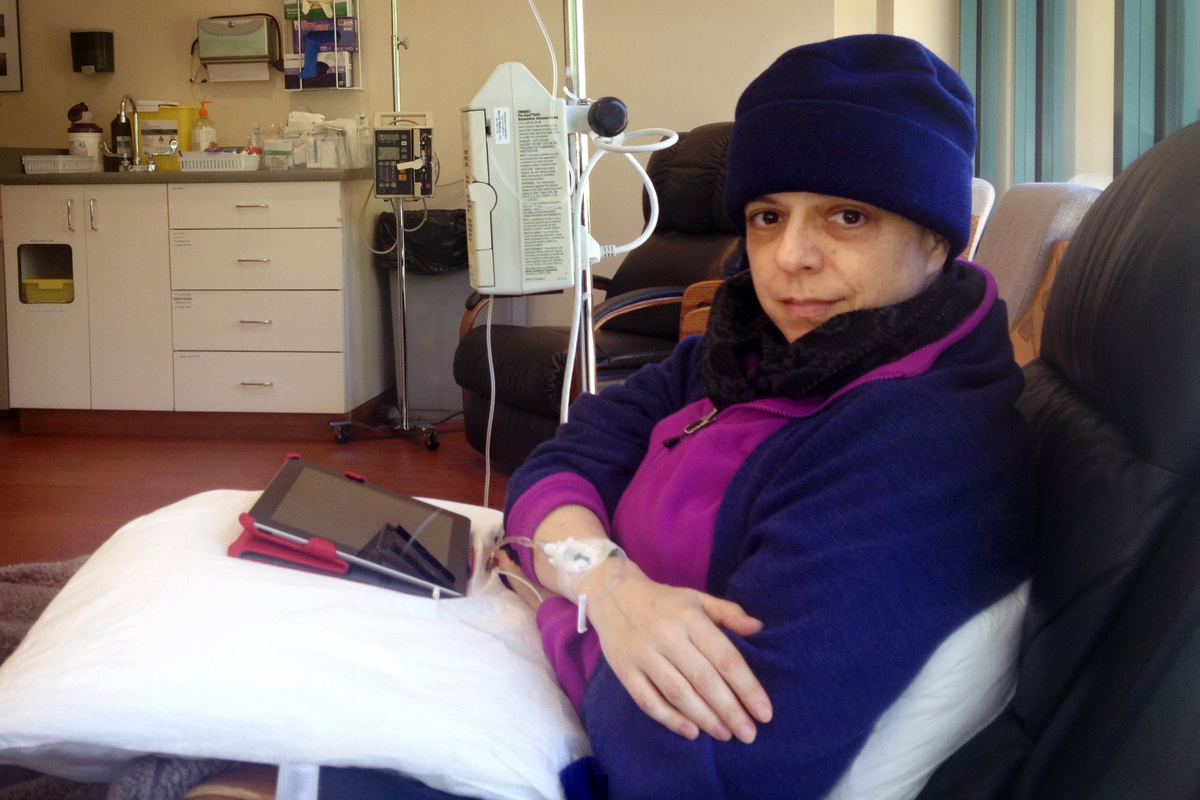 Jennifer Glass found out she had lung cancer four months after she got married. Here, her first round of chemo in February 2013.

When Jennifer Glass goes to Sacramento on Tuesday to deliver testimony in favor of the California End-of-Life-Options Act, the trip will require some complex logistics.

Her 17-year-old stepson, Tristan, will bundle her into her car and get behind the wheel to drive the two hours from her home in San Mateo, just south of San Francisco. Glass, 52, hopes she's up to the physical challenge. These days even going downstairs for a glass of orange juice means, as she put it the other day, that "I have to plan for that, I have to rally for that, and then I gotta go up and rest from that."

Glass's testimony in support of the right to die is an intensely personal one. She was diagnosed with lung cancer in 2013, and last month she learned it had become resistant to the oral Tarceva she was taking; the cancer is now in both lungs and in her liver, abdomen, pelvis, cervix and brain.

She is now on a new drug regimen including carboplatin, a big-guns chemotherapeutic agent that has really set her back: she says she feels profound exhaustion, has a constant, debilitating headache and is aware of poison "permeating" her body — the poison of the chemo and the poison of the cancer itself.

So her work on behalf of the bill, SB-128, has taken on a new urgency.

The bill, the most recent in a long line of such bills that have been introduced in California since 1995, passed the state Senate in early June by a vote of 23 to 15. The Assembly's health committee is scheduled to vote on it Tuesday after hearing testimony from Glass and a few others, including the mother of Brittany Maynard, the 29-year-old California woman with brain cancer who moved to Oregon so she could end her life on her own schedule. She died last November.

If the bill passes the committee, it moves to the Assembly's judiciary and appropriations committees, after which the whole Assembly has until Sept. 11 to vote on it. From there it would it go to Gov. Jerry Brown's desk for his signature; neither the bill's supporters nor its opponents seem to know how he leans on the issue.

Glass's cancer interrupted her life as a newlywed. She'd had an active career in corporate communications and was an inveterate traveler and a devoted Aunt Jen to her sisters' kids when she met Harlan Seymour, a software engineer, on Match.com in 2010. They had no intention of marrying, but after they moved in together, everything was so "natural and wonderful," Glass recalls, that she suddenly realized "I wanted to be his wife." She was 49 years old, and had never felt that way before. She and Seymour married in August 2012.

Four months later, just as she was getting used to being a wife — and to being a stepmother to Tristan, then 14, who lived with them half time, and Eloise, then 4 and living primarily with her mother in Chicago — Glass was diagnosed with inoperable lung cancer. "Seriously, who's writing these punch lines?" she wondered aloud. "The cosmic irony of it all did strike me."

As 2013 began, her days became consumed with chemotherapy, radiation, marshaling her declining energy, living the best life she could in the time she had left, and finding a way to avoid a painful and debilitating ending.

"I'm not afraid of death," she told me. "I have been comfortable with the concept of my own mortality for a long time, long before my diagnosis."

But what she is afraid of, she said, is the particular brutality of a cancer death, "drowning in my own lung fluids with my family watching me suffer." Her husband knows about such death first hand, having watched both his parents die from cancer — something he and Glass talked about on their very first date.

The couple did a lot of Googling looking for "what our options might be, looking for a peaceful exit that would be a pill or cocktail I could take that would allow me to go to sleep at the time of my choosing." But no such pill or cocktail existed legally in California. "I felt like it was up to me to jerry-rig this, to find my way around the system because I didn't find the system acceptable."

Glass remembered the advocacy group Compassion & Choices from having watched a documentary a few years earlier called How to Die in Oregon. She contacted them to see if they could help her find a way to die on her own schedule. Later, when her cancer had stabilized, she became an unpaid volunteer for the organization. This has included speaking publicly on behalf of SB-128.

With her husband, Glass created "One Year With Lung Cancer," a video composed of one photograph a day of Glass going through her treatments, with musical accompaniment from Glass's brother, Lawrence. She also blogs about cancer for The Huffington Post, and started a second career as a motivational speaker, giving talks at spas in Arizona and Mexico.

Seymour took early retirement from his tech job and the couple settled into a routine, as far as the treatment schedule would allow. They worked in their shared home office in the morning, met for lunch, went together to the gym where Glass swam and Seymour lifted weights, and returned home for dinner with Tristan. Many evenings they took an after-dinner walk.

"The days are really lovely," she said at the time, "except for this part where I have cancer."

Getting the right-to-die law passed "means I would have the rest of my life when I would be able to live in peace."

Now her focus is on getting SB-128 passed. "I'm doing everything I can to extend my life," she said at a press conference from the state capitol building last January, when the bill was introduced. "No one should have the right to prolong my death."

Glass is already suffering a good deal, but she said it's too soon to decide how much suffering would be enough to make her start thinking about hastening her death. Her plan now is to tough it out through the grueling chemotherapy, which usually takes four to six months. "Then we'll see where I am," she said.

"But regardless of whatever happens to my cancer," she added, "it would be an enormous relief to me if this bill passes in September and the governor signs it."

The earliest the law could go into effect is January 1, 2016, which might turn out to be too late to help her directly. But even if she doesn't live to see it implemented, Glass said, knowing it was on the horizon "means I would have the rest of my life when I would be able to live in peace."