Accessibility links
Administration Proposes Rules To Modernize Nursing Home Safety : Shots - Health News If nursing homes want to be paid by Medicare and Medicaid, they'll likely have to meet a range of new requirements for quality and safety, including more training of nurses in dementia care. 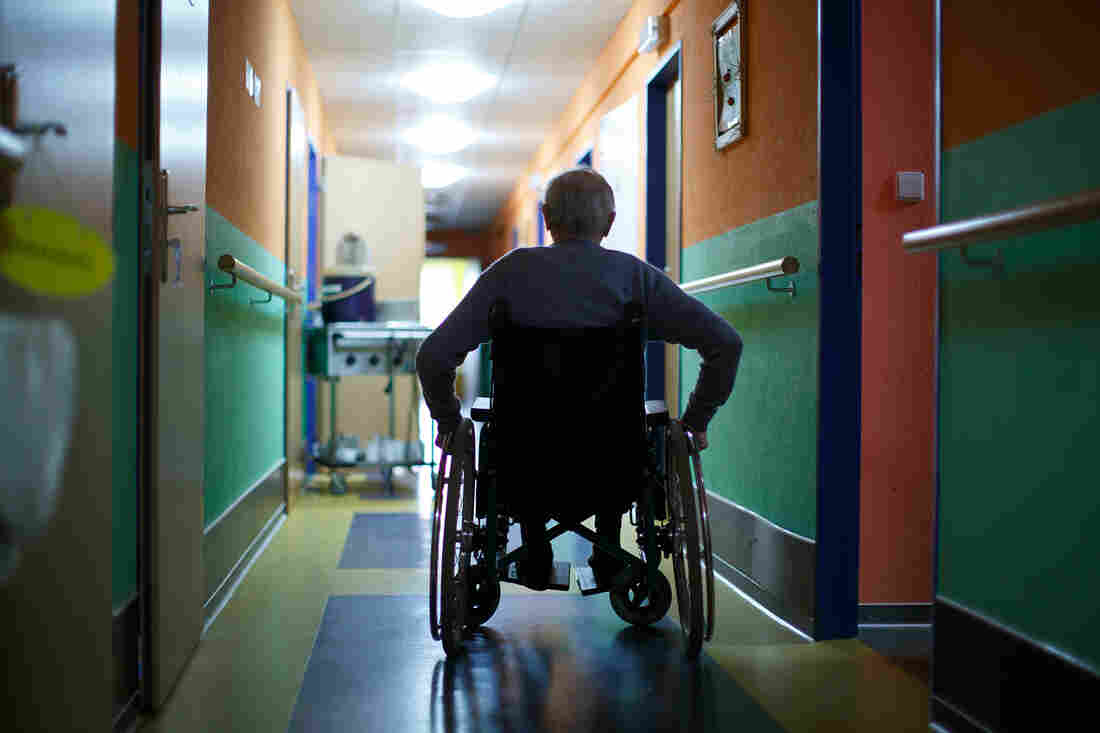 Proposed federal rules would aim to minimize the use of antipsychotic drugs and increase training for nurses in dementia care. Jiri Hubatka/imageBroker/Corbis hide caption 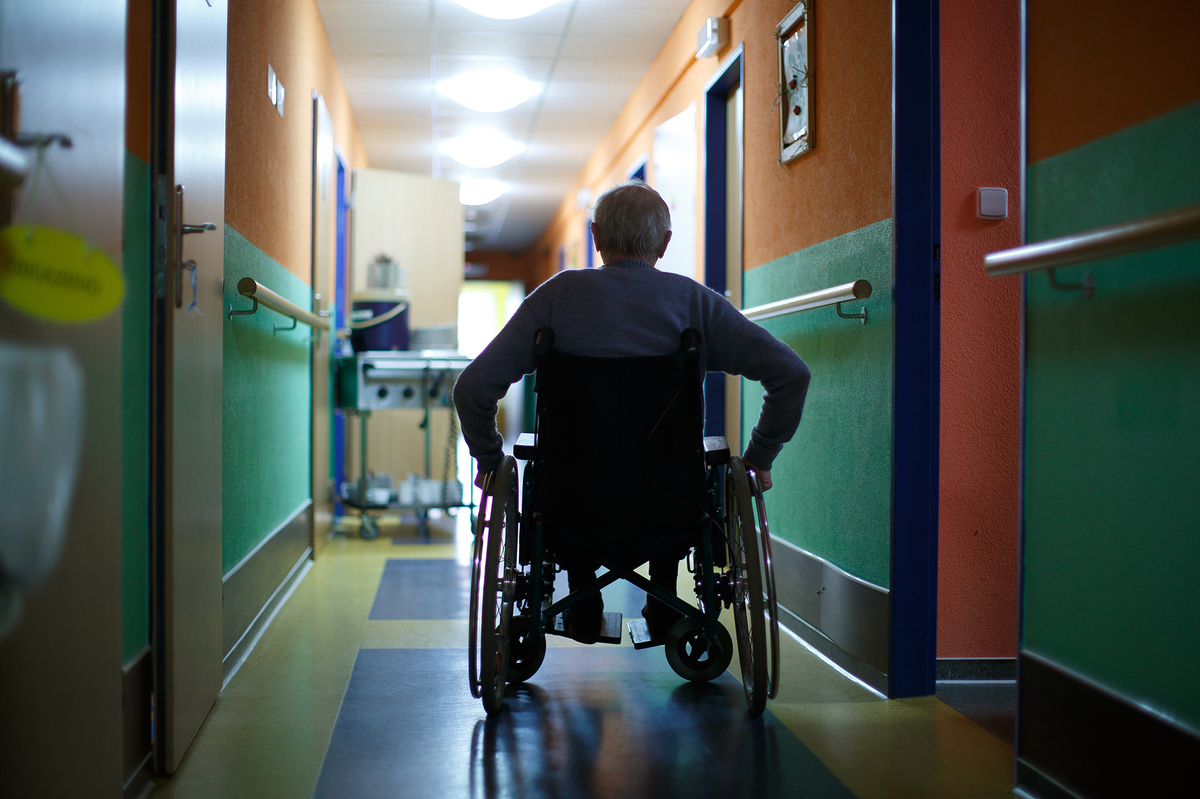 Proposed federal rules would aim to minimize the use of antipsychotic drugs and increase training for nurses in dementia care.

After nearly 30 years, the Obama administration wants to modernize the rules nursing homes must follow to qualify for Medicare and Medicaid payments.

The hundreds of pages of proposed changes cover everything from meal times to use of antipsychotic drugs to staffing. Some are required by the Affordable Care Act and other recent federal laws, as well as the president's executive order directing agencies to simplify regulations and minimize the costs of compliance.

Officials unveiled the update as the White House Conference on Aging convenes Monday. The once-a-decade conclave sets the agenda for meeting the diverse needs of older Americans, including long-term care options. This month also marks the 50th anniversary of the Medicare and Medicaid programs, which cover almost 125 million older, disabled or low-income Americans. Medicare and Medicaid beneficiaries make up the majority of residents in the country's more than 15,000 long-term care facilities.

"The existing regulations don't even conceive of electronic communications the way they exist today," said Dr. Shari Ling, Medicare's deputy chief medical officer. "Also there have been significant advances in the science and delivery of health care that just weren't imagined at the time the rules were originally written. For example, the risks of antipsychotic medications and overuse of antibiotics are now clearly known, when previously they were thought to be harmless."

The proposed regulations include a section on electronic health records and measures to better ensure that patients or their families are involved in care planning and in the discharge process. The rules also would strengthen infection control, minimize the use of antibiotic and antipsychotic drugs and reduce hospital readmissions.

Revised rules would also promote more individualized care and help make nursing homes feel more like home. For example, facilities would be required to provide "suitable and nourishing alternative meals and snacks for residents who want to eat at non-traditional times or outside of scheduled meal times."

Residents should also be able to choose their roommates. "Nursing facilities not only provide medical care, but may also serve as a resident's home," the proposed rules say. "Our proposed provision would provide for a rooming arrangement that could include a same-sex couple, siblings, other relatives, long term friends or any other combination" as long as nursing home administrators "can reasonably accommodate the arrangement."

Consumer advocates are likely to be disappointed that officials are not including recommendations to set a federal nurse-to-resident ratio.

However, the proposed changes would require that nurses be trained in dementia care and preventing elder abuse to better meet residents' needs.

"We believe that the focus should be on the skill sets and specific competencies of assigned staff," officials wrote in the proposed rules, "to provide the nursing care a resident needs rather than a static number of staff or hours of nursing care that does not consider resident characteristics."

Nursing homes will be required to report staffing levels, which Medicare officials said they will review for adequacy.

"It's a competency approach that goes beyond a game of numbers," said Ling. "If residents appear agitated, figure out why, get at the cause of the problem," she said, instead of resorting to drugs to sedate residents.

Advocates for nursing home residents argue that because of inadequate staffing, residents with dementia are often inappropriately given antipsychotic drugs, even though that can be dangerous for them. The new rules would help control the use of these drugs by requiring the facility's pharmacist to monitor drugs that are prescribed for excessive periods of time or other irregularities and require the resident's physician to address the problem or explain in the resident's medical record why the medication is necessary.

"We don't have enough nursing staff," Toby Edelman, a senior policy attorney at the Center for Medicare Advocacy, said before the rules were released. Federal law requires only one registered nurse on the day shift for a 20-bed facility or as much as a 500-bed facility, licensed practical nurses around the clock and sufficient staff to meet residents' needs, she said.

"We don't look at the specific staffing positions per se," said Greg Crist, a spokesman for the American Health Care Association, which represents 11,000 skilled nursing facilities. "We look at the needs of the individuals when determining staff levels, and that is best addressed in the resident's care plan."

Although there are also no provisions addressing enforcement in the proposed rule, Ling said it "will permit detection of violations to enable enforcement by lessening the noise."

"The biggest problem is that the rules we have now are not enforced," said Edelman. "We have a very weak and timid enforcement system that does everything it can to cajole facilities into compliance instead of imposing penalties for noncompliance."

A report by the Center for Medicare Advocacy last year found that some serious violations often were not penalized.

"Once the new rules are finalized, they will be added to the items nursing home inspectors check," Ling said.