Accessibility links
Would Banning Headers In Soccer Solve The Concussion Problem? : Shots - Health News Most concussions in youth soccer happen during heading the ball. But it isn't the ball's fault, researchers say. Rather, it's player collisions. Avoiding aggressive play would help reduce injuries. 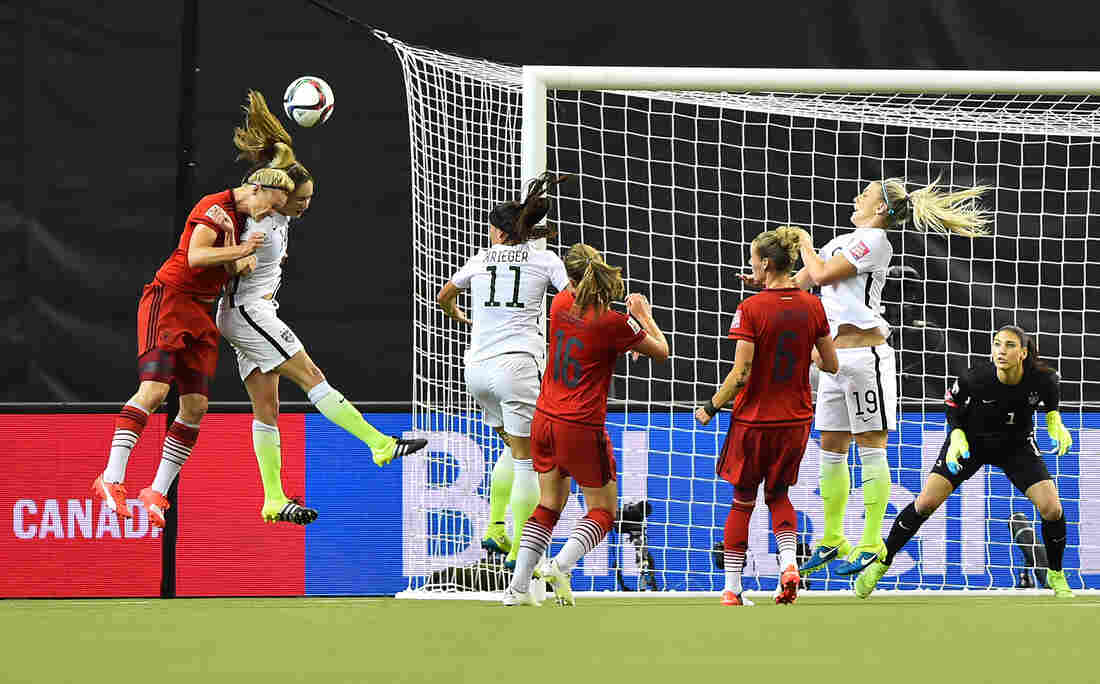 Germany's Alexandra Popp and the U.S.'s Morgan Brian collide during a World Cup semifinal in June. Both were injured, but continued to play. Brad Smith//ISI/Corbis hide caption 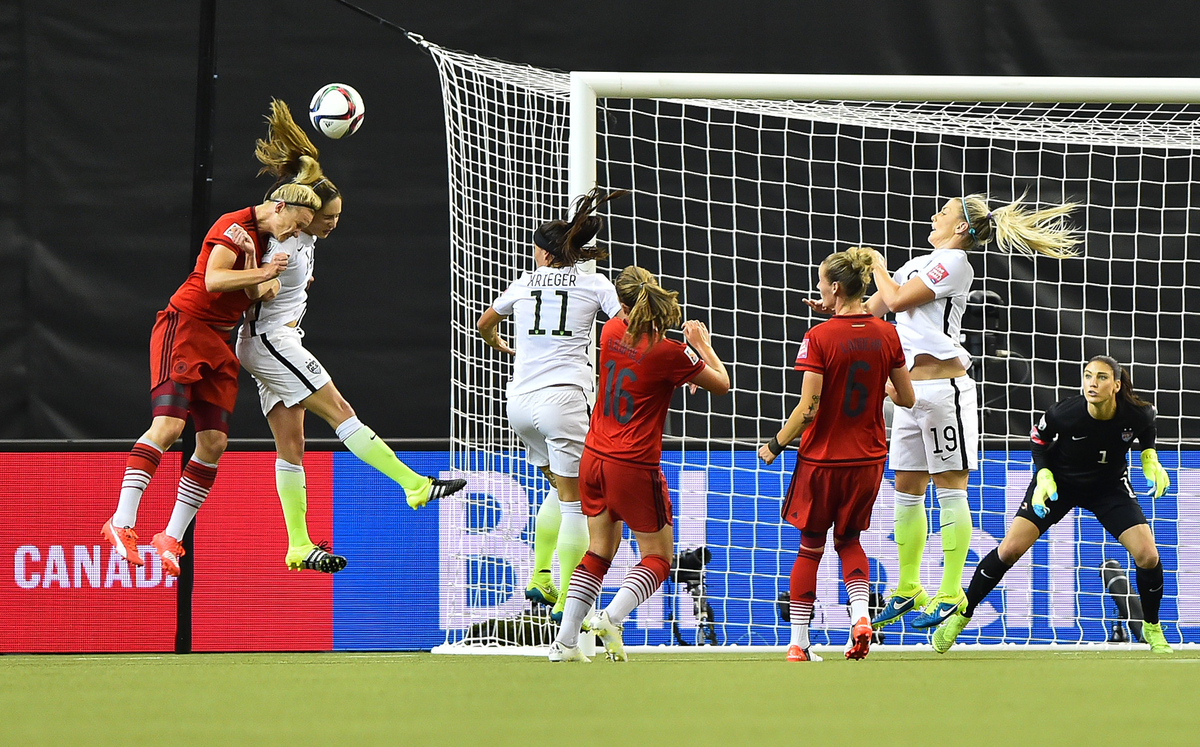 Germany's Alexandra Popp and the U.S.'s Morgan Brian collide during a World Cup semifinal in June. Both were injured, but continued to play.

Heading the ball in soccer has been accused of causing most concussions. But the hazard may be more due to rough play than to one particular technique, researchers say.

The risks involved in heading — when a player uses their head to keep the ball in play — are not new. But Dawn Comstock, an injury epidemiologist at the University of Colorado's School of Public Health, wanted to know if headers are indeed the chief cause of concussions.

She became curious after learning of the Safer Soccer Campaign, a collaboration between the Sports Legacy Institute and several former U.S. Women's soccer stars that was formed to try to ban heading in youth players under age 14. Though she respected their motives, Comstock wanted to be sure the changes the group proposed would really make a difference. "I like to see kids kept safe," she says, "but I like to see that the evidence is data-driven."

To find out the cause and frequency of concussions in youth soccer, Comstock and her colleagues looked at nine years of data on high school soccer players. They found that although heading is the phase of play most frequently associated with concussions, accounting for 30 percent of concussions in boys and 25 percent in girls, many concussions weren't coming from the impact of the player's head with the ball. Instead, most concussions, including those that happened while heading the ball, resulted from athletes colliding.

Concussions Can Be More Likely In Practices Than In Games

"Our takeaway from that," Comstock says, "is yes, if you ban heading in soccer, you would prevent some concussions." But, she says, enforcing the rules of the game might make a bigger difference. "They're willing to completely eliminate a phase of play," she says, "But nobody is willing to address the elephant in the room, which is rough play."

A lot of the athlete-athlete contact is unnecessary and illegal, Comstock says, and can be controlled by playing by the rules. "Coach fair play, coach technique," she says, "And ensure officials enforce the rules of the game."

One problem is that this aggression plays out on the world stage—and on our TVs at home. Like that heart-stopping moment in the Women's World Cup semifinal game when Morgan Brian and Alexandra Popp collided in mid-air. Both women were attempting to head the ball; their heads cracked together and both crumpled to the ground. "Our children emulate what they see their sports stars do," Comstock says. "If they see the women in the World Cup playing so aggressively, they will translate that to the field." But we have the ability to stop it, she says. "We control the level of aggressiveness we see."

And if we are permissive about athlete-athlete contact, if we look the other way when the rules are broken, we foster an environment where players can get hurt, she says. In that case, a ban on heading would be better than nothing. "If we're not going to control the aggressive play, if we keep letting soccer evolve into a game that's starting to look like football, by all means ban heading," she says. "We will keep some kids safe."

Other studies have found similar results, including one by John O'Kane, a sports physician and professor at the University of Washington Medical Center who was not involved in the study. He, too, thinks that banning heading might not solve the whole problem. "Heading is part of the sport and while there is risk involved, no sport is completely safe," he says via email. "The question is how to make heading and soccer in general safer, especially for kids."

O'Kane agrees with the call to reduce contact between players. "I believe that we place an emphasis on winning over learning proper technique at too young an age," he says, "The result is teams with big, fast aggressive players that win by running over people instead of playing good soccer."

One concern O'Kane has with Comstock's study is that it relies on the players to report their own injuries to an athletic trainer, and not all players do. Comstock acknowledges that this is a limitation, but says concussions are tricky to diagnose conclusively. It's not like a broken bone, where a doctor can order an X-ray; most concussions are diagnosed based on self-reported symptoms. "This [study], we feel, is a reliable snapshot of what's actually happening to athletes in a high school setting across the U.S.," she says.

One thing Comstock doesn't want, she says, is for parents to see the results of her work and pull their kids out of sports. "I want more kids to play sports more often," she says. "I just want all adults around youth sports to keep them safe." And she thinks that controlling aggression might be the best way to do that.

"Every kid just wants to play," she says. "They'll play by whatever rules you tell them they have to."