Accessibility links
Early Push To Require The HPV Vaccine May Have Backfired : Shots - Health News The HPV vaccine has failed to gain market share compared to other new vaccines, even though it's great at preventing cancer. Concerns about teen promiscuity and attempts to require it may be why.

Early Push To Require The HPV Vaccine May Have Backfired

Early Push To Require The HPV Vaccine May Have Backfired 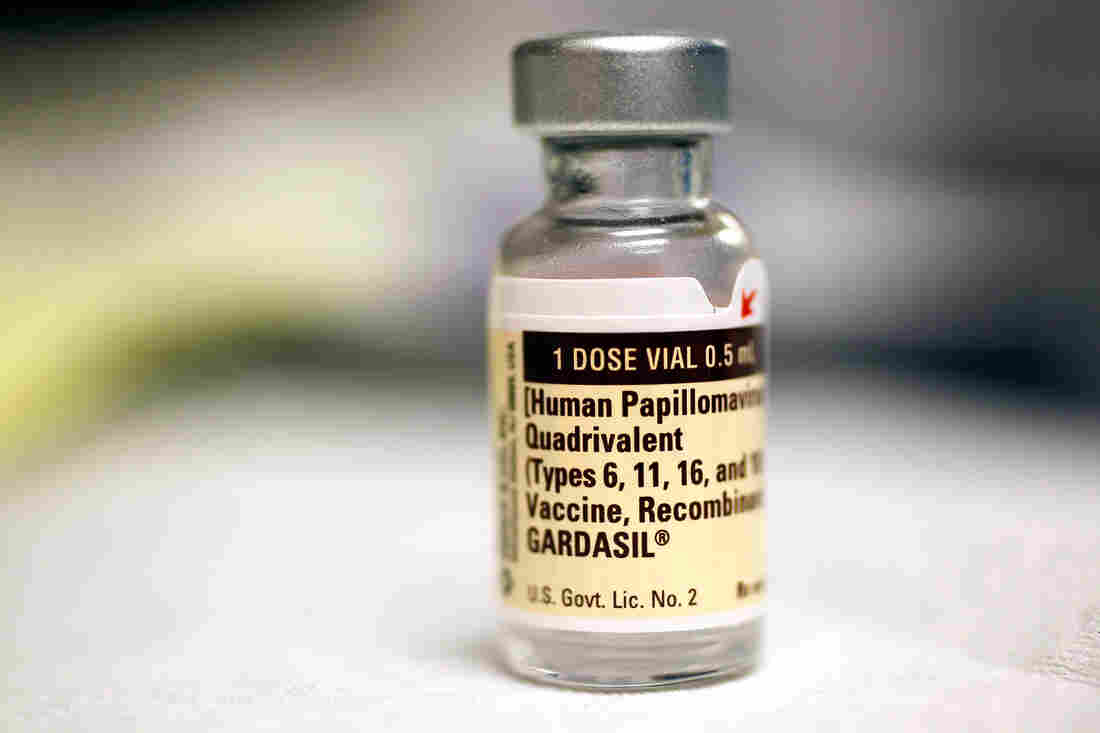 HPV vaccine prevents cervical cancer and other cancers by fending off the virus that causes them. But it's been a tough sell with doctors and parents. Joe Raedle/Getty Images hide caption 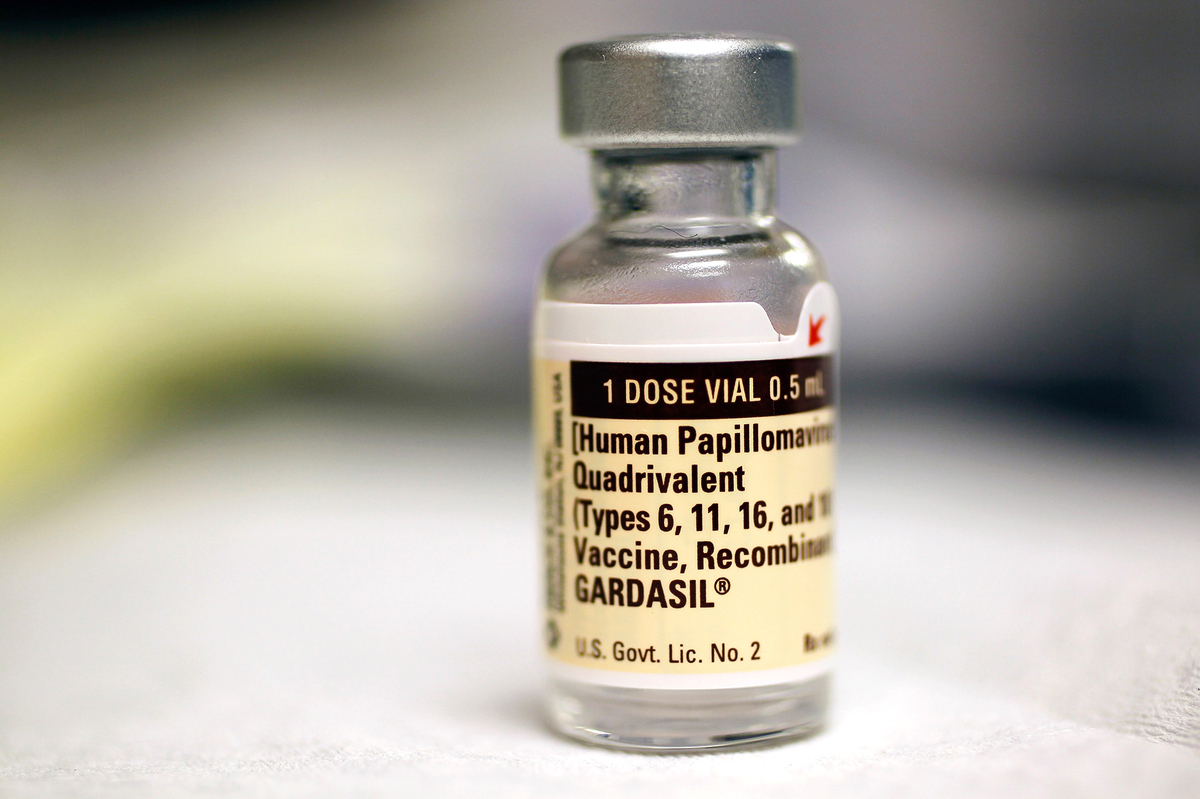 HPV vaccine prevents cervical cancer and other cancers by fending off the virus that causes them. But it's been a tough sell with doctors and parents.

Nine years after it was first approved in June 2006, the HPV vaccine has had a far more sluggish entree into medical practice than other vaccines at a similar point in their history, according to a report in Tuesday's JAMA.

This might not surprise those who remember the early days of the human papillomavirus vaccine, which was targeted at girls aged 11 and 12 to prevent a sexually transmitted infection that causes cancer — but which opponents quickly branded as a vaccine that would promote teenage promiscuity.

Jason Schwartz, a health policy researcher at Princeton University's Center for Human Values, and his undergraduate research assistant Laurel Easterling compared state requirements for the HPV vaccine with those for three other vaccines introduced since 1990. That includes another used to prevent a sexually transmitted infection that causes cancer.

Eight years after the meningococcal vaccine was introduced, according to the JAMA report, it was required for middle school admission in 21 states and the District of Columbia. At the same point in its history, the vaccine against varicella, the virus that causes chickenpox, was required in 38 states and D.C. And 36 states and D.C. required the vaccine against hepatitis B — which, like HPV, is a sexually transmitted infection linked to cancer, in this case liver cancer (though, unlike HPV, it is given to infants, not preadolescents).

By comparison, eight years after it was introduced, just one state, Virginia, and D.C. required the HPV vaccine for middle school enrollment. And both have easy opt-out clauses for parents. Next month, it will also be required in Rhode Island.

Why such dismal acceptance rates for HPV? Part of the problem is that the original testing on the vaccine was done only on girls, and its 2006 approval was for girls only; approval for boys didn't come until 2009, and it wasn't added to the list of recommended vaccines for boys until 2011.

So early lobbying for state mandates was easily twisted to language that cast the HPV vaccine as "a vaccine that would introduce sexual activity in young women, that would inappropriately introduce promiscuity," says Sarah Gollust, an assistant professor of health policy and management at the University of Minnesota School of Public Health.

"If they had waited until it was recommended for both boys and girls, that would have made a big difference," says Gollust, who was not involved in the study. "No other vaccine is required for just one gender, so it felt like there was something different about this one."

Another reason may be the early push to require the HPV vaccine, Schwartz says. "There was such an outcry for requirements, just days and weeks after [the HPV vaccine] was introduced," he says. "I think it backfired. Even if well intentioned, it wasn't the right time to talk about requirements. That should come at a particular time in a vaccination program, when all the foundational work has been in place" — work that he says includes making sure that questions of safety, supply and financing have been addressed, and that mechanisms of public health education are in place.

Instead, what HPV got was a rapid, possibly premature push toward legislation to mandate its use — an effort that turned out to be largely promoted by the manufacturer of Gardasil, the pharmaceutical giant Merck. "For state legislators and state health departments, there may be a reluctance to return to that heated and contentious atmosphere," Schwartz says.

The sense that the vaccine is controversial has stuck in the American mindset, Gollust says — even if the exact particulars of the controversy are forgotten. As a result, even pediatricians are hesitant to recommend the vaccine for 11-year-olds, fearful of bringing up a conversation with parents that could involve adolescent sexuality.

"I think the biggest place to push here now is on the provider conversation, having providers discuss the vaccine with their patients as they would discuss any other vaccine," she says. According to Gollust, the single most important factor in whether a young person is vaccinated against HPV is whether his or her doctor recommends it.

The CDC is trying to do some catch-up to reframe the debate, focusing on that provider-initiated conversation. It has given grants to public health agencies in seven states to conduct campaigns targeting what Schwartz calls "HPV exceptionalism."

As Minneapolis physician Jon Hallberg, the narrator of the CDC-supported video from Minnesota's Department of Health, tells his peers: "We now have a way to prevent today's adolescents from developing certain forms of cancer tomorrow, and all we have to do is treat the HPV vaccine just like any other: take every opportunity to recommend it, give the doses on schedule and be prepared to answer any question, just as you would for any other vaccine. No drama needed."

Science writer Robin Marantz Henig is a contributing writer for The New York Times Magazine and the author of nine books.