Accessibility links
Siren Song Of Tech Lures New Doctors Away From Medicine : Shots - Health News Medical school graduates around San Francisco Bay are far less likely to pursue medical residencies than those in other parts of the country. Instead, many are heading to health technology ventures.

Siren Song Of Tech Lures New Doctors Away From Medicine

Siren Song Of Tech Lures New Doctors Away From Medicine 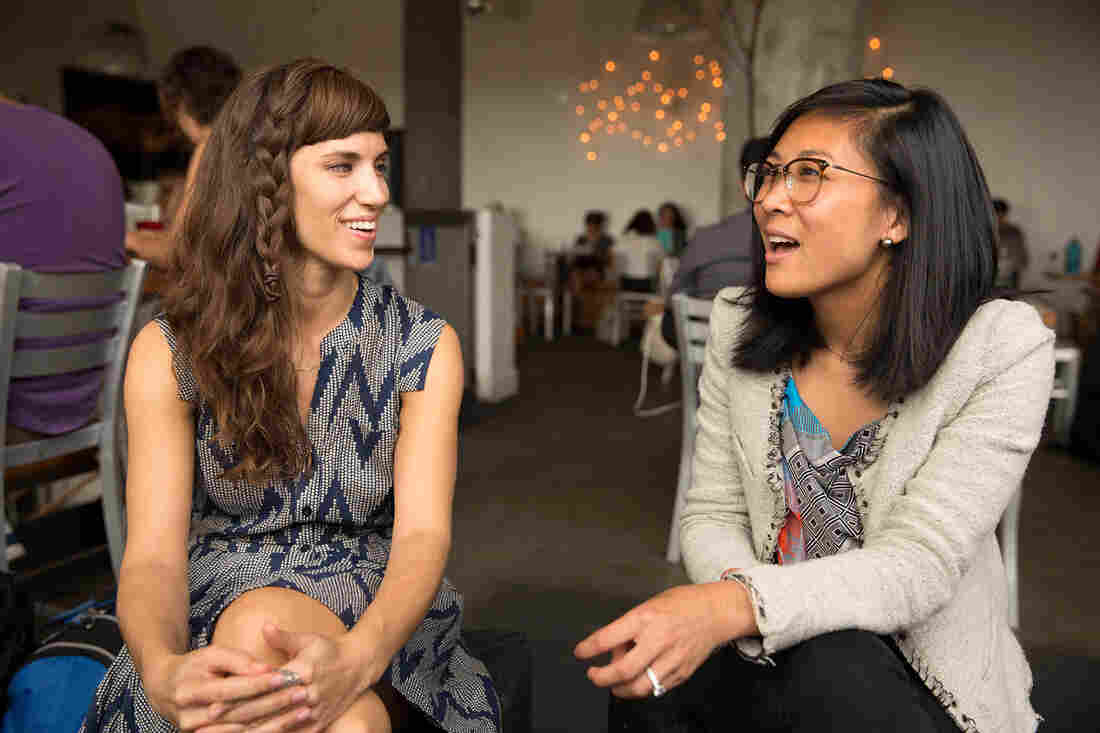 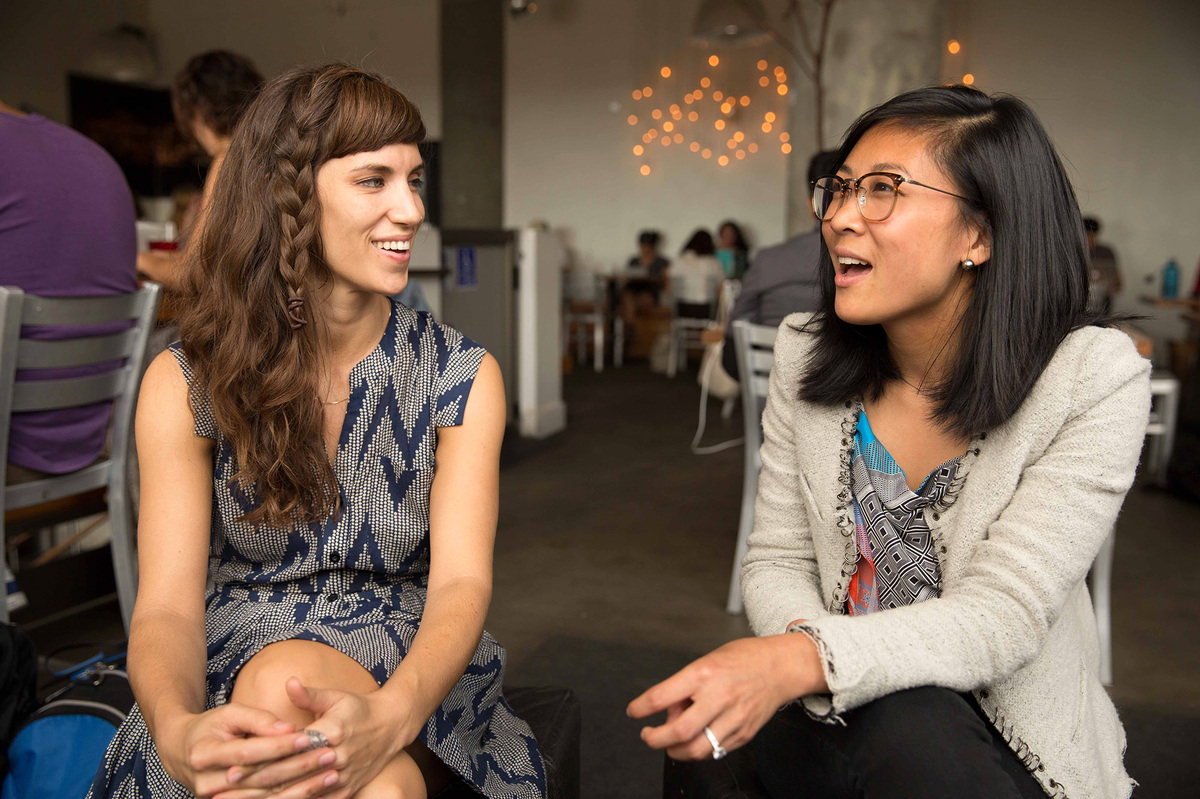 Even as a young child, Amanda Angelotti dreamed about becoming a doctor.

But by her third year at the University of California, San Francisco medical school. Angelotti couldn't shake the feeling that something was missing.

During a routine shift at the hospital, making rounds with her fellow students, Angelotti said her thoughts kept drifting.

"I was supposed to be focused on the patient's vital signs and presenting a summary, but I was consumed with thoughts about how to improve the process of rounds," she said. Most striking to her was the patient's absence from the discussion. "I kept asking myself, 'How could we change things to involve the patient more?'"

Just a stone's throw from UCSF Medical Center, a small group of entrepreneurs at Rock Health, a business accelerator program that is now a venture firm, were thinking about how to shake up the health care process with technology. These startups were developing new wearable devices and mobile apps to help patients take more control of their own health.

The timing was right to bring new ideas to the sector. By 2012, hospitals around the country were rapidly moving away from paper-based medical records to electronic systems, a first step to moving health care into the digital age.

Angelotti graduated the following year, but she didn't apply for any residency programs. Instead, she went to work at Rock Health as a researcher and writer and later joined the medical review site Iodine, one of an exploding number of digital health startups in San Francisco.

By the end of that year, Rock Health projected that venture funding for digital health funding had exceeded $1.9 billion, a 39 percent jump from the prior year.

Angelotti is far from alone in making the leap from medical school to digital health.

Bay Area-based medical students from Stanford and UCSF have among the very lowest rates of pursuing residency programs after graduation compared to the rest of the country, according to Doximity, a physician-network that generates data for the U.S. News Best Hospitals rankings.

For its part, UCSF said that between 2011 and 2015, it graduated 816 medical students. Among them, 803 matched into residencies (98.4 percent match rate). Six more matched after taking a gap year, bringing the match rate to 99.1 percent, UCSF said.

"We've seen that many of these Bay Area-based medical students are drawn to startup opportunities," said Jeff Tangney, CEO of Doximity. "It used to be biotech, and now it's more often digital health."

Many of the top digital health companies are eager to hire new grads straight out of medical school, even though they lack years of clinical experience.

As Sean Duffy, the CEO of Omada Health and a Harvard Medical School dropout put it: "I wanted to understand what's in the trenches, so I could redefine the trenches." Omada Health offers an online help for people looking to change their behavior to avoid developing diabetes.

Duffy is part of a private Facebook group called "dropout doctors," which includes some of the biggest names in digital health. It functions as a support group, of sorts, and meets every few months for dinner or drinks. Some members, like Angelotti, said they find solace in the group as it can be difficult and lonely to opt out of clinical medicine for a different path.

'I Never Thought I Would Leave Medicine'

There's both a push and a pull motivating young doctors to seek opportunities in technology.

Many of the students at the top Bay Area medical schools, Stanford and UCSF, are exposed to entrepreneurial thinking during their education, which can be a major draw.

"I never thought I would leave medicine," said Eichstadt, who now works at Grand Rounds Health, a San Francisco-based startup that helps patients access second opinions from top medical experts online. "But there's such a rich opportunity at companies here."

Eichstadt graduated from Stanford and pursued several years of residency, specializing in plastic and reconstructive surgery.

"I realized that the system isn't designed for doctors to make the real change you would like to for the patient." Eichstadt concluded that she could make a bigger impact elsewhere.

Many of the dropout docs say they want to improve the doctor-patient experience. Several said they spent very little time administering care during medical school, and they felt that patients were too often kept out of the loop.

A recent study found that doctors-in-training spend an average of just eight minutes with each patient. This is a drastic decrease from previous generations and is linked to more record-keeping requirements and restricted on-duty hours.

Connie Chen still practices medicine a half-day each week. But shortly after medical school, Chen co-founded an app called Vida, which connects people who have chronic diseases with virtual health coaches, like nutritionists and nurses.

Chen said learned very little about nutrition at medical school. But digital health opened up opportunities for Chen to educate herself about wellness.

"Traditional health care is really oriented to make the life of the provider easier," she said. "Your patients cycle in and out of the hospital, and very often, no one makes enough of an effort to communicate with them."

Other dropout docs said they felt pushed out of medicine, due to the lack of career opportunities or earning potential. Family practitioners, who serve on the front lines of health care, are paid the least.

"I loved working with patients but I looked around me and realized that I didn't want the jobs of anybody who had 'succeeded' as a clinician," said Rebecca Coelius, who graduated with a medical degree from UCSF.

Coelius now advises a number of health-tech startups, including Doximity and previously worked for HealthLoop, which was founded by Jordan Shlain, another entrepreneurial doctor. She's also worked for the government as a medical innovation officer.

"Tech culture is very appealing when juxtaposed against the hierarchy and myriad hoops to be jumped through in clinical medicine," she said.

Update 7/23 at 4:45 p.m.: Doximity updated data on the percentage of Stanford medical students applying to residency programs in 2011 after this post was first published. The original version of the post stated it was 65 percent. The updated information put it at 68 percent.

Update 12/4 at 3:45 p.m.: The post was updated to reflect data provided by UCSF. Between 2011 and 2015, 816 medical students graduated from the school. Among them, 803 matched into residencies (98.4 percent match rate). An additional six students matched after taking a gap year, bringing the match rate for the period to 99.1 percent.