Accessibility links
Women Want To Stay In The Game, But Life Intervenes : Shots - Health News Basketball is the most popular sport among both boys and girls, but many women end up dropping the game in adulthood, even though they still love it. Injuries, work and family are three reasons why.

Sports And Health In America 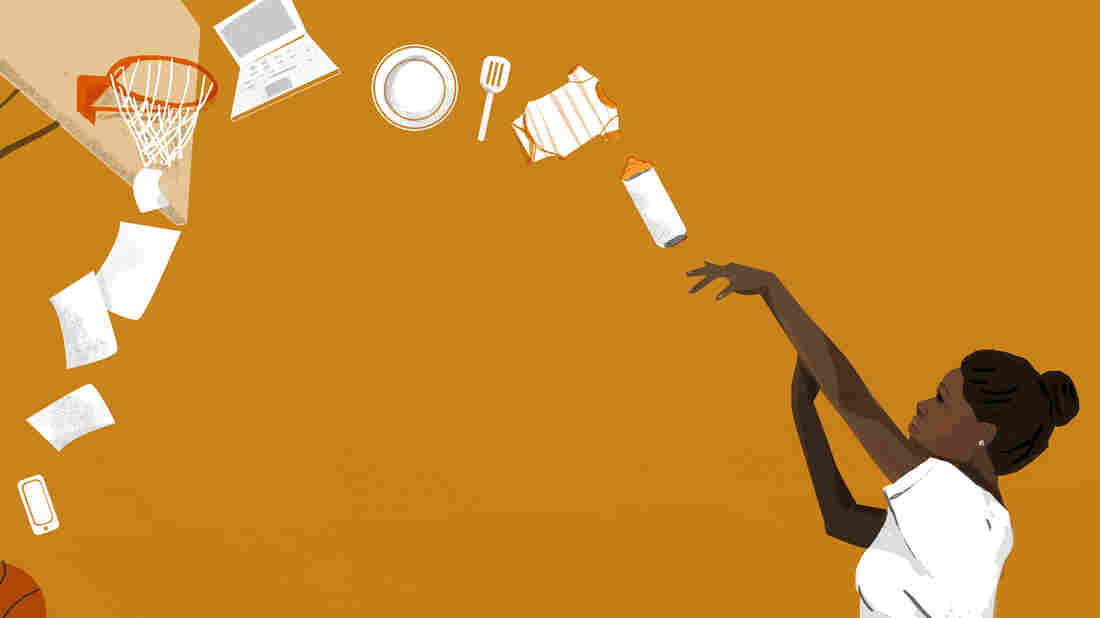 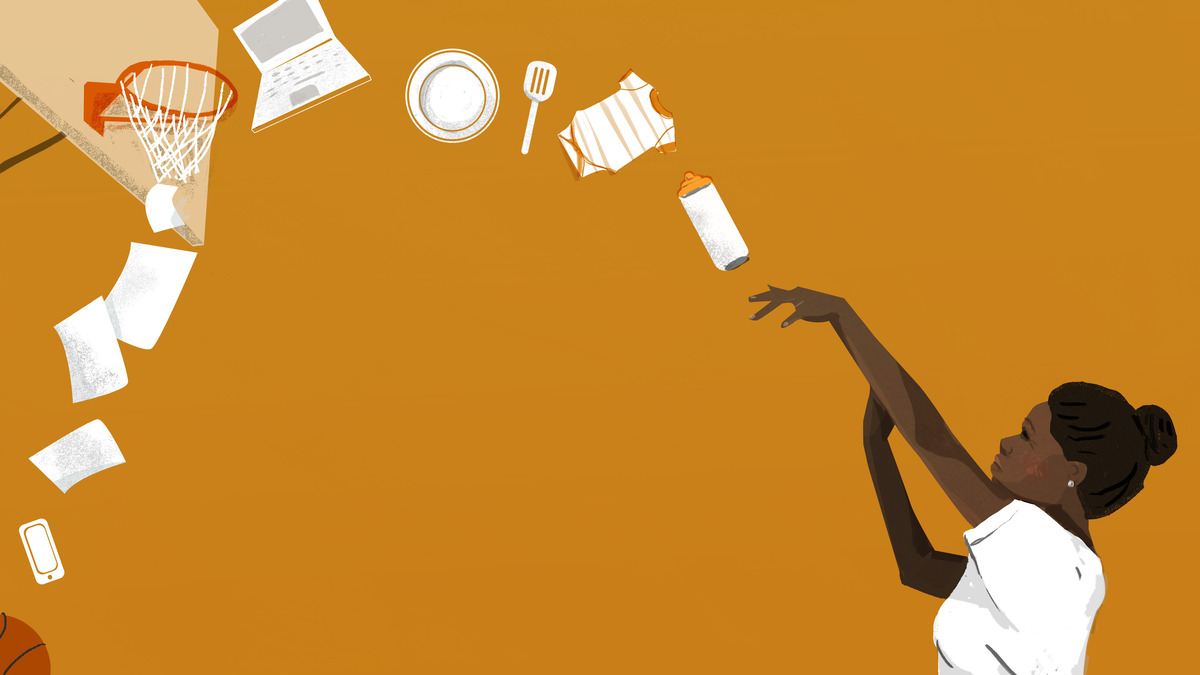 The United States is basketball crazy.

For boys and girls who play sports, basketball is the most popular choice.

But as Americans age, a new poll by NPR, the Robert Wood Johnson Foundation and the Harvard T.H. Chan School of Public Health reveals, there's a widening gender gap when it comes to hoops. Why are adult female basketball players giving up the game they once loved?

Certainly not all women are giving up the sport.

On a hot summer evening in Portland, Ore., Tanya Martin is running with the men. The scene is Portland's Hillside Community Center, another Monday night of basketball league games. Martin, a 30-year-old mother who works for Child Protective Services in nearby Vancouver, Wash., is wearing her favorite non-work clothes: white tank top, baggy black shorts, electric blue Nikes. She darts on defense; on offense, she sets solid screens and then pops open, calling for the ball.

When she does, it's probably a good idea for her male teammates to get it to her — Martin averages more than 20 points a game playing with the men in and around Portland. She's really good at volleyball, too. But the basketball court is Martin's place to escape.

"It's kind of like my beach," she says. "It's the one time that my mind can actually just not think about anything else but ... but playing."

Martin gets this mental and physical boost about four days a week, playing games with both men and women. But even if she played only one day, that would put her ahead of many of the women included in the NPR/Robert Wood Johnson Foundation/Harvard poll.

According to the poll, nearly equal proportions of men and women age 30 and over who played sports when they were younger said basketball was the sport they played most often in their youth — 19 percent of these men and 20 percent of these women. But the poll shows that by the time they became adults, there's a big difference. Among adults who played sports in the past year, 14 percent of men, but only 5 percent of women, said basketball is what they played most often.

Basketball is among the top five sports played most often by men in every age group. It only breaks the top five in the youngest age group of women polled (ages 18-29). In all the other age groups of women, basketball drops off the list of top five sports — a list that includes softball, volleyball, golf and tennis.

To find out why the drop in hoops, we asked adult women on NPR's Facebook page to explain their decision to quit after being heavily involved in the game when they were younger.

They say career, parental responsibilities and injuries have made it harder to play.

Numerous scientific studies confirm that female athletes are more likely than men to suffer knee injuries, including ACL tears, and basketball can be ruthless with its jumping, pivoting and pounding. For 36-year-old Jodi Ostlund, that painful reality began after she got a basketball scholarship to Bethel College in Kansas.

"My freshman year I didn't play much," says Ostlund, who lives in McPherson, Kan. "I was anticipating more playing time my sophomore year, but tore my ACL the day before practice started."

Ostlund rehabbed all year long, came back the next year and got hit by more bad luck. "I tore my other ACL, like three days into practice," she says. "So that was kind of the end of competitive sports for me." Oh, and Ostlund tore an ACL for the third time, after college, playing pickup volleyball.

Correen Schall from Columbus, Ohio, avoided major injury while playing basketball in high school and in college at the University of Mount Union in Alliance, Ohio. After college, she played rec basketball. Schall, now 35, stopped playing for other reasons. The main one? She had three kids in four years. And she says even in the most equal of marriages, like hers, mothers still, often, are the default parent.

"Because we're so involved in the day-to-day care when [the kids] are little," she says, adding: "When I was nursing, I couldn't not be home."

Schall's kids are older now. She'd love to find her way back into basketball. The sport, she says, gave her a real sense of self.

"I like the team, the sense of camaraderie, the sense of working together," Schall says. "I like being able to be full-out aggressive and have it be welcomed instead of criticized to some degree."

That's a feeling shared by Nikia Smith Robert. Aggressiveness was mandatory when she was a kid; she grew up playing street ball with the boys, in Harlem. She played a year in college and then played in lots of tournaments into young adulthood. Smith Robert stopped playing when she was pregnant with her first child, then returned to the game after the baby was born in 2009. 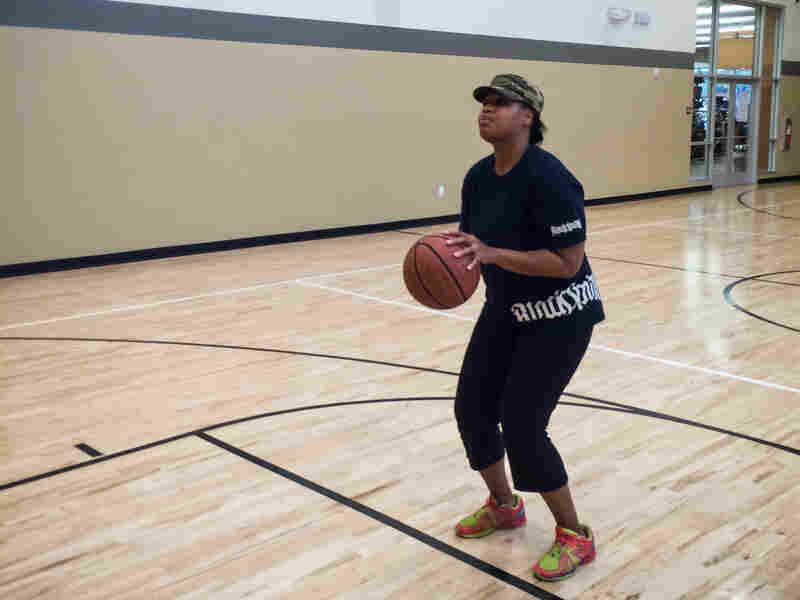 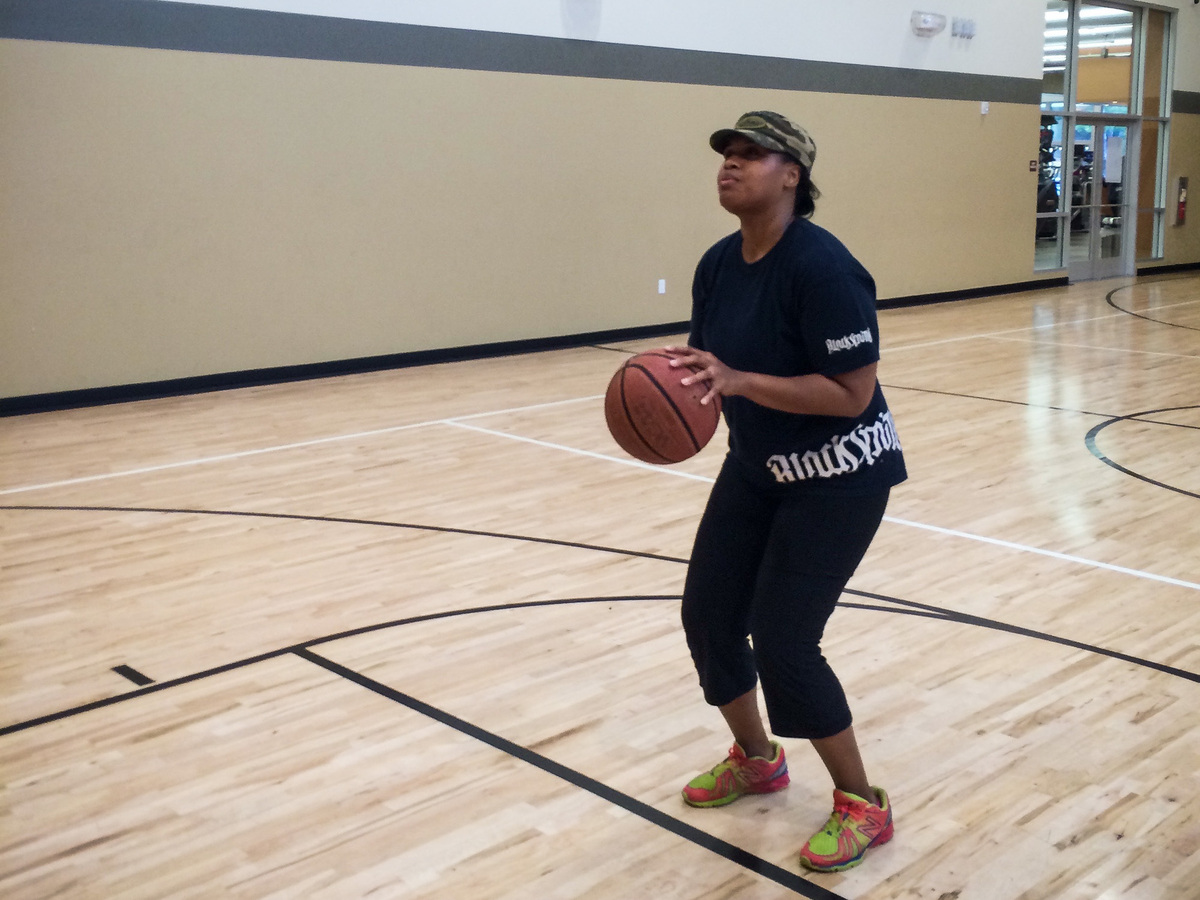 Nikia Smith Robert stopped playing basketball when she was pregnant with her first child, then returned to the game after the baby was born in 2009.

She was stunned when she got back onto the court.

"I lost my nerve," Smith Robert says. "There was more at risk, so I didn't want to risk injury if that meant being out of a job or losing a job or not being able to properly care for my child."

And so, Smith Robert says, when she did play, she played "reserved."

"I didn't dive for balls. I didn't jump for rebounds if that meant colliding with other players. To me that was unacceptable, because I saw how that affected and even frustrated my teammates."

Now 36, Smith Robert is a chaplain and Ph.D. theology student living in La Crescenta, Calif. She's out of the game but taking baby steps back through her kids.

"I'm starting to teach my very dainty daughter how to be more comfortable with a basketball," Smith Robert says, laughing. "And I'm playing with my son. Because I want them to still see me as a baller. That's important to me. It's a part of my history and identity."

For many adult women, the key to getting back to basketball is finding the right game, the right group. That can be tough because the opportunity isn't often there.

Courtney Weigand was a scrappy shooting guard growing up and playing ball in rural Missouri. "I always won the hustle award," she laughs. Now 32 and an economist at the Treasury Department in Washington, D.C., Weigand would like to play regularly again. But she isn't having much luck.

"People are just way recreational or very, very competitive," she says. "I really haven't found a league that [matches] my skill level."

A Look At Sports And Health In America

Are opportunities limited because there aren't enough players? Or are there not enough players because opportunities are limited? Many of the women we contacted said pickup basketball, often dominated by men, isn't an option. Some said it was dangerous, with the men often bigger and more physical. Other women said pickup is an affront to the fundamentally sound basketball they learned as girls.

"The selfishness in a pickup game, the suppressed sexist decisions, and the sloppy fundamentals can borderline ruin it!" says 28-year-old Julia Hartsell Chisholm, from Asheville, N.C. 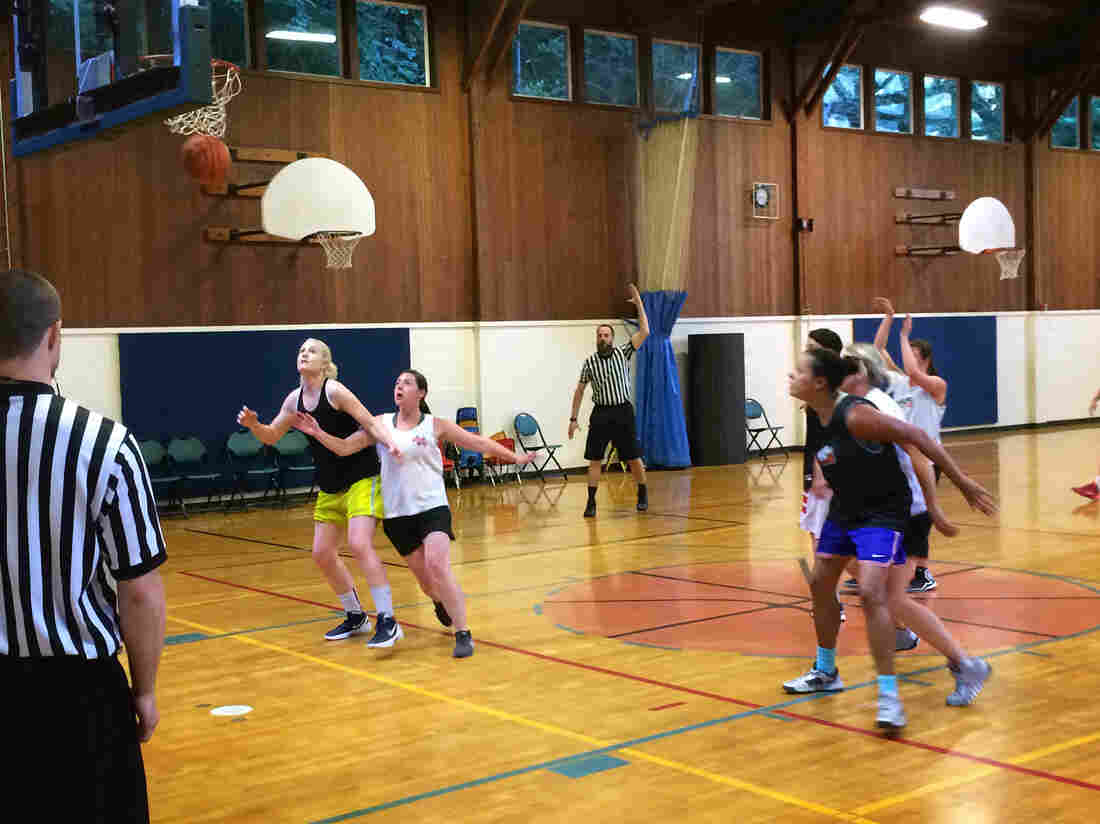 The scene at Portland's Hillside Center seems to be an antidote to what ails adult women's basketball. Women of varying abilities are playing a pretty crisp, officiated game. There are working mothers out on the court — like Tanya Martin. And like Lei Hart. She played college basketball at George Washington University in Washington, D.C. Hart is a 41-year-old lawyer who has carved out the time to play, even with two kids.

"I bring one with me," Hart laughs during a break in the action. "And Monday night is just my regular thing [for basketball]. I don't schedule anything else for Monday night, and if I don't have to work, then I'm able to be here."

But Portland is not immune to the national trend. Hart's team, Bonnie's Ballers, is one of roughly 20 women's teams in this city league. That's compared with more than 200 for men. That's not good enough for Mikal Duilio. He started the league 23 years ago.

"Portland, Ore., should be producing 30 to 35 women's teams at least, before I can feel good," Duilio says.

He says home life is the biggest deterrent to more women playing, and he's trying to figure out a solution.

Of course the nature of basketball, requiring a high level of fitness, a durable body and specific skills, weeds out women and men as they age. But if the people we talked to are an indication, many more adult women are leaving the game before they're ready.

Which is why Julia Hartsell Chisholm emailed us this call to arms:

Ladies, where have you gone? There are CERTAINLY more than just me — there have to be women who love the sport ... who probably gave significant parts of their lives to the sport that have a desire to keep playing. Can't we all band together and make it happen? Can't we bring women's basketball to a place where it's not only the elite who continue to play? Can't we make room for us on the court, who spent hours sprinting, sliding and lifting? Can't we peel ourselves away from what our futures have brought us — motherhood or careers — to play the sport we once did everything in our power to play?