Accessibility links
Younger Adults With Alzheimer's Are Key To Drug Search : Shots - Health News A very rare genetic mutation causes some people to develop Alzheimer's in their 30s. It also makes these people the ideal candidates for tests of potential Alzheimer's drugs. 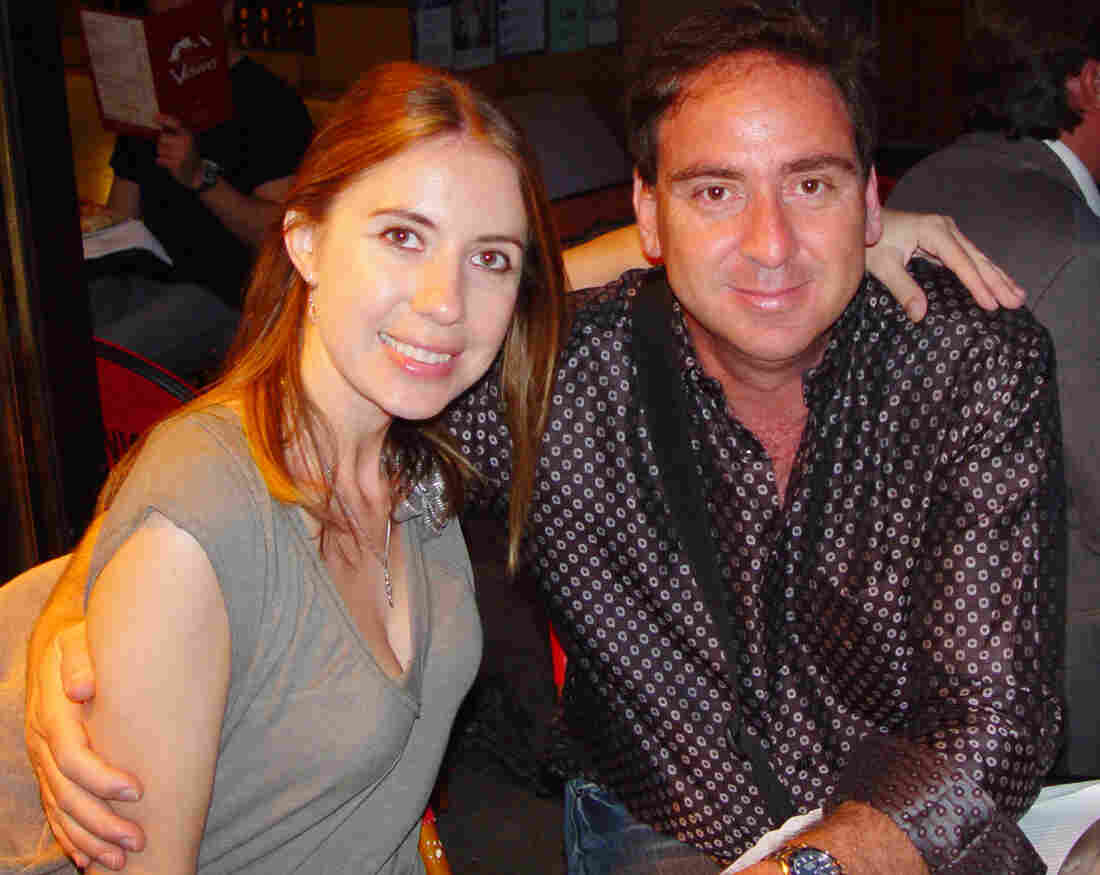 Giedre (left) and Tal Cohen in March 2013, while Giedre was still healthy. Since then, she's begun having symptoms of Alzheimer's disease. In Giedre's case, the illness is tied to a rare genetic mutation she inherited. Courtesy of Tal Cohen hide caption 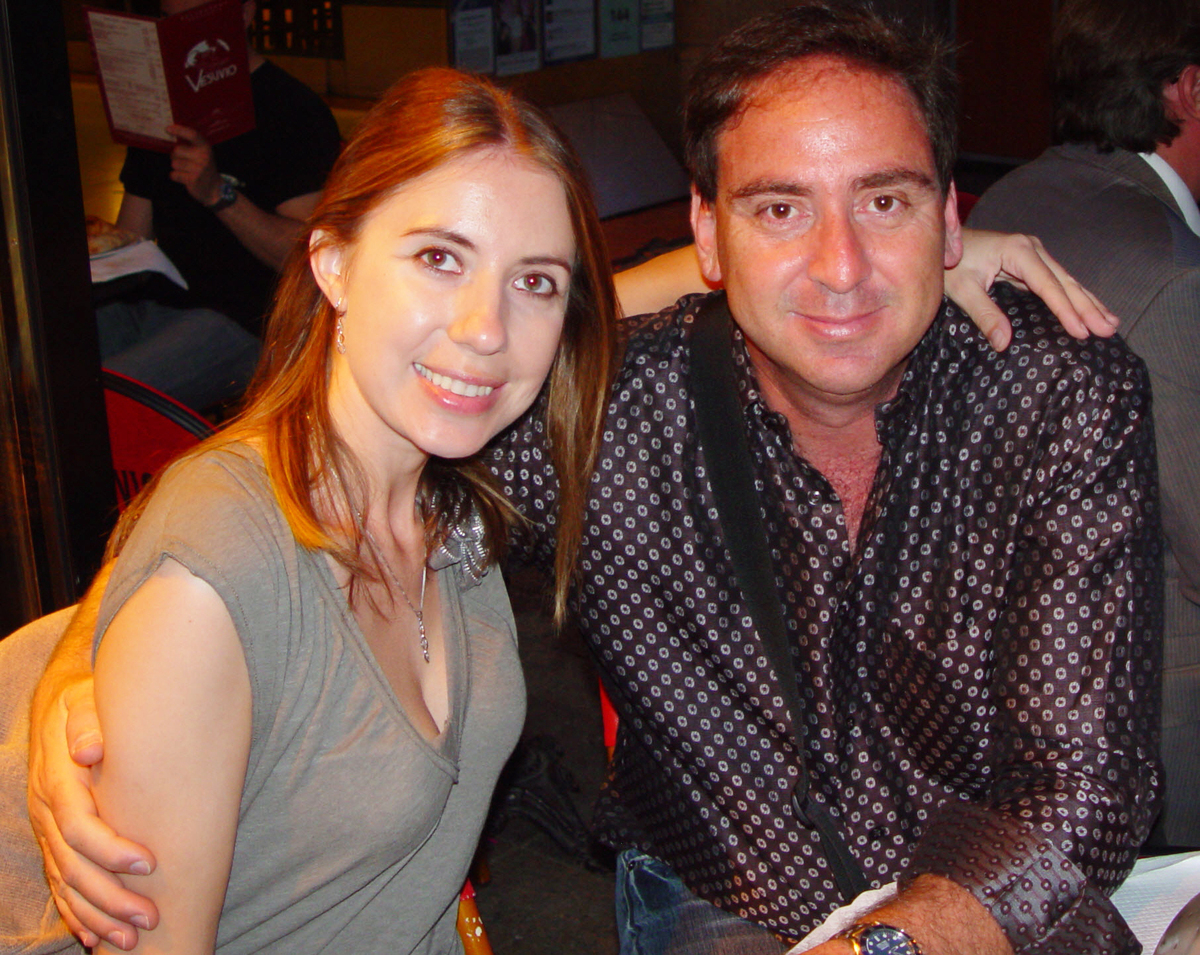 Giedre (left) and Tal Cohen in March 2013, while Giedre was still healthy. Since then, she's begun having symptoms of Alzheimer's disease. In Giedre's case, the illness is tied to a rare genetic mutation she inherited.

The face of Alzheimer's isn't always old. Sometimes it belongs to someone like Giedre Cohen, who is 37, yet struggles to remember her own name.

Until about a year ago, Giedre was a "young, healthy, beautiful" woman just starting her life, says her husband, Tal Cohen, a real estate developer in Los Angeles. Now, he says, "her mind is slowly wasting away."

People like Giedre have a rare gene mutation that causes symptoms of Alzheimer's to appear before they turn 60.

Until recently, people who inherited this gene had no hope of avoiding dementia and an early death. Now there is a glimmer of hope, thanks to a project called DIAN TU that is allowing them to take part in a study of experimental Alzheimer's drugs.

The project also could have a huge payoff for society, says Dr. Randall Bateman, a professor of neurology at Washington University in St. Louis. "It's highly likely," he says, that the first drug able to prevent or delay Alzheimer's will emerge from studies of people genetically destined to get the disease.

Giedre Cohen enrolled in the DIAN TU study in 2013, when she still had no symptoms of Alzheimer's, her husband says. Their story began more than a decade earlier.

In 2002, Tal Cohen was on a trip to Miami to attend a wedding. He met Giedre, who was born in Lithuania, and the two fell in love.

"I spent the next, basically, two years, flying back and forth every two weeks or so in a long-distance relationship, until I finally convinced her to come out to Los Angeles," Cohen says.

"Life was going great," he says, until Giedre's older sister came out for a visit and seemed to be having memory problems. "She forgot that she lives in Connecticut," he says, "and I said, 'Something is fundamentally wrong here.' "

What was wrong was that Giedre's sister had the gene mutation that causes Alzheimer's to develop very early. Cohen says he consulted a neurologist who told him the odds were 50-50 that his wife also had the mutation.

Tal and Giedre decided they had to do something. And pretty soon they found DIAN, the Dominantly Inherited Alzheimer Network, an international research project based at Washington University in St. Louis.

The network was created specifically for members of families affected by the mutation that causes early Alzheimer's. "Virtually 100 percent of the mutation carriers, even if they're asymptomatic now, are going to become symptomatic," says Dr. John Morris, DIAN's principal investigator and a professor of neurology at Washington University.

At first, DIAN's purpose was to study participants to learn more about Alzheimer's. But when potential drugs for Alzheimer's were ready to be tested in people, the network created DIAN TU (the TU stands for Trials Unit) to help participants get access to experimental drugs.

That effort now includes drug companies, the National Institute on Aging, the Alzheimer's Association and more than 400 members of families with the mutation. 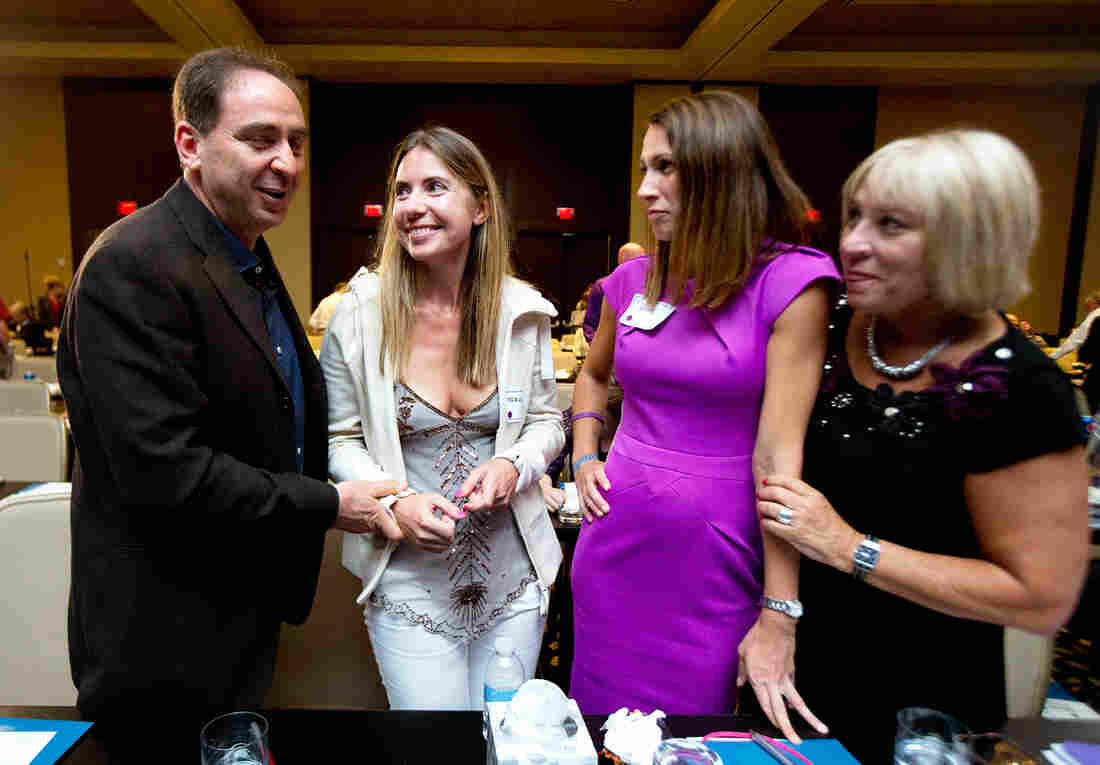 (From left) Tal and Giedre Cohen chat with Carrie Richardson and Mary Salter during a break at the Alzheimer's Association International Conference in Washington, D.C., on Saturday. Manuel Balce Ceneta/AP hide caption 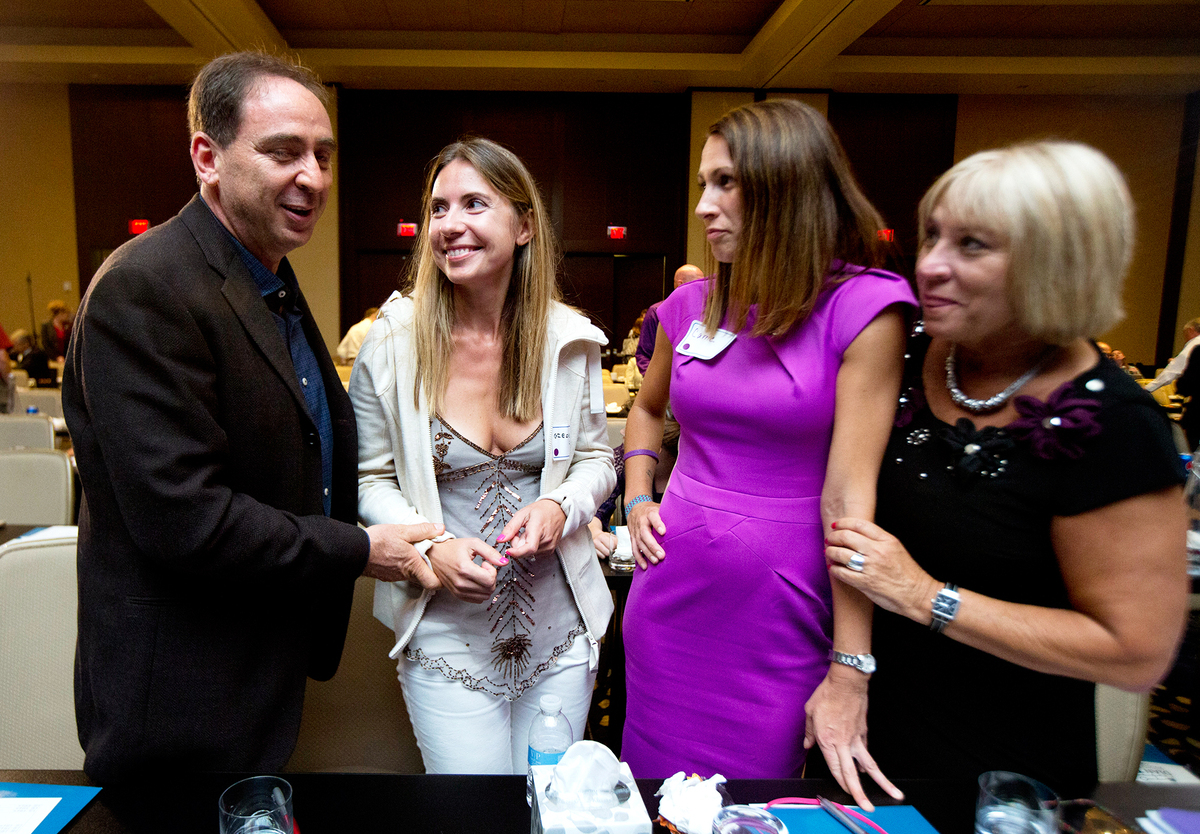 (From left) Tal and Giedre Cohen chat with Carrie Richardson and Mary Salter during a break at the Alzheimer's Association International Conference in Washington, D.C., on Saturday.

When drug companies began to focus on preventing Alzheimer's a few years ago, they became very interested in people who had no symptoms but were certain to develop the disease. And DIAN TU gave them a way to reach these people.

Alzheimer's prevention trials would be very hard to carry out in the general population because Alzheimer's can take decades to develop, and many people never get it. People with this mutation, however, are virtually certain to develop Alzheimer's around the same age that one of their parents did.

Alzheimer's Drugs In The Works Might Treat Other Diseases, Too

This type of genetically targeted drug testing has been done before: Several decades ago, for example, drug companies tested the first cholesterol-lowering drugs in a population of people who had a huge genetic risk for heart disease.

"These families had mutations that caused them to have heart attacks and strokes in their 30s, 40s and 50s," Bateman says. But the cholesterol drugs were able to "melt away cholesterol deposits" in these people and extend their lives by decades.

"Time is running out for these families," he says. "As they and their siblings and their children advance in age, they're marching toward that inevitable certainty of Alzheimer's disease and death."

So far, the DIAN TU study has included two different drugs intended to reduce amyloid, the sticky substance that builds up in the brains of people with Alzheimer's.

Because of the way the study is structured, 75 percent of people participating are getting one of the candidate drugs, while 25 percent are getting a placebo. The study is "blinded," which means that Giedre and Tal Cohen don't yet know which of the drug candidates she's getting, if any.

They do know that Giedre's symptoms have continued to progress, her husband says.

"Every time Giedre gets dosed, I anguish," Tal says, "wondering if she is getting something that will help her — or just a saline solution that will do nothing, and I'm putting her through this needlessly."

Last weekend, the couple traveled to Washington, D.C., to attend the first ever meeting of DIAN families. It was held just before the annual Alzheimer's Association International Conference, which took place this week.

Cohen says it was comforting to meet families with the same tragic problem he and his wife are facing. But the meeting also gave him a forum to make an impassioned plea for better access to the latest experimental Alzheimer's drugs — drugs that might yet help his wife.

"We had the FDA there, the regulators; we had the pharma guys, we had the researchers," he says. "They heard me loud and clear."