Accessibility links
Innovative Brain Imaging Combines Sound And Light : Shots - Health News Try to look inside the brain, and you're not going to get very far. But photoacoustic imaging may be a solution for the shortcomings of conventional imaging. It uses lasers to make the brain sing. 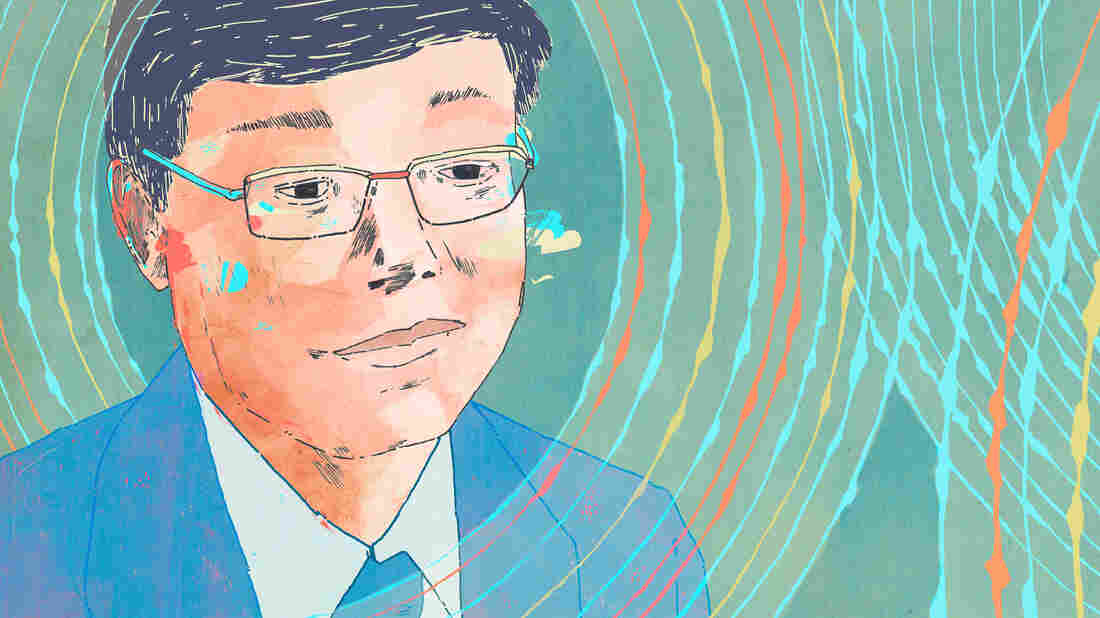 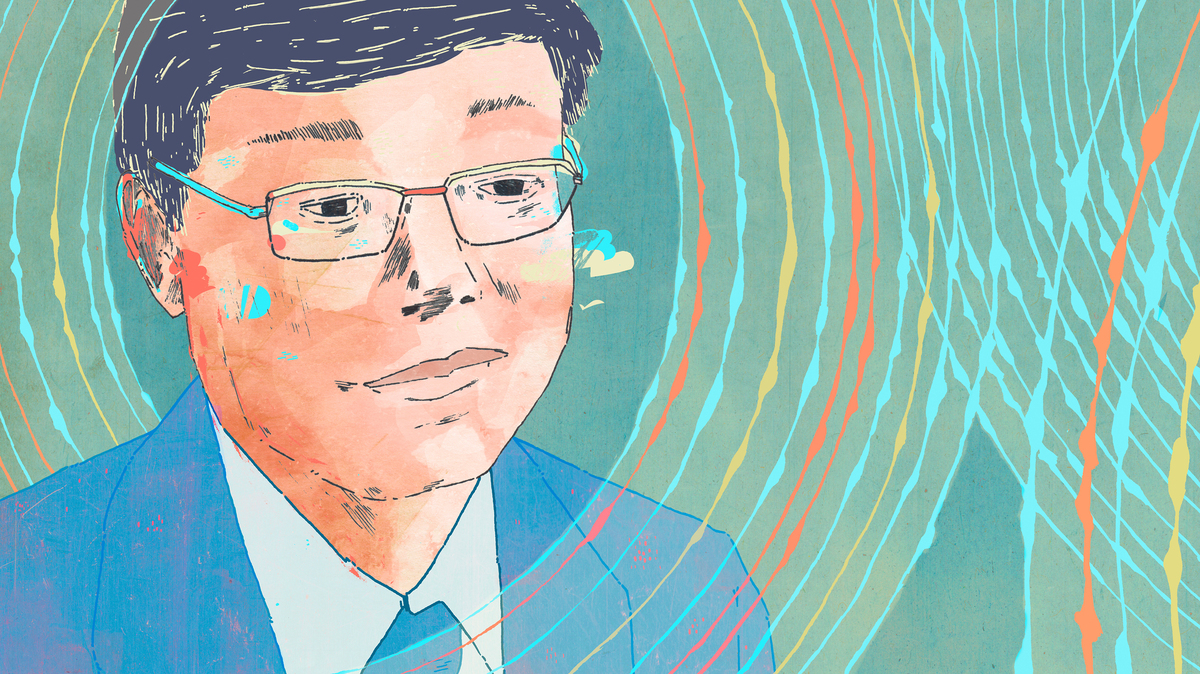 Lihong Wang creates the sort of medical technology you'd expect to find on the starship Enterprise.

Wang, a professor of biomedical engineering at Washington University in St. Louis, has already helped develop instruments that can detect individual cancer cells in the bloodstream and oxygen consumption deep within the body. He has also created a camera that shoots at 100 billion frames a second, fast enough to freeze an object traveling at the speed of light.

"It's really about turning some of these ideas that we thought were science fiction into fact," says Richard Conroy, who directs the Division of Applied Science & Technology at the National Institute of Biomedical Imaging and Bioengineering.

Wang's ultimate goal is to use a combination of light and sound to solve the mysteries of the human brain. The brain is a "magical black box we still don't understand," he says.

Wang describes himself as a toolmaker. And when President Obama unveiled his BRAIN initiative a couple of years ago to accelerate efforts to understand how we think and learn and remember, Wang realized that brain researchers really needed a tool he'd been working on for years.

"We want to conquer the brain," Wang says. "But even for a mouse brain, which is only a few millimeters thick, we really don't have a technique that allows us to see throughout the whole brain."

Current brain-imaging techniques such as functional MRI or PET scans all have drawbacks. They're slow, or not sharp enough, or they can only see things near the surface.

So Wang has been developing another approach, one he believes will be fast enough to monitor brain activity in real time and sharp enough to reveal an individual brain cell.

Wang's initial idea was to use light. There was a problem, though — one that's obvious if you hold your hand up to a light bulb. When light enters the body, it starts bouncing around.

"This is why we can't even see our own bone in the hands," Wang says. "Because light, after, like, a millimeter, it becomes hopeless to get a very good sharp image."

Wang thought he had a solution. It involved sound. Sound waves don't bounce around much in the body, which is why an ultrasound can show a growing fetus.

A photoacoustic image of a mouse's eye shows tiny blood vessels in the iris.

But ultrasound images are blurry, sometimes so blurry it's hard to tell a boy from a girl. So Wang began experimenting with a technique that blends the speed and precision of light with the penetrating ability of sound. It's called photoacoustic imaging.

"We're combining the strengths of two forms of energy, light and sound, in a single form of imaging," Wang says.

In the past few years, photoacoustic imaging has become a very big deal in the scientific world. And so has Wang.

Last year, he published more than 50 scientific papers. So far his research has attracted nearly $50 million in grant funding. And Caltech was impressed enough to lure him away from Washington University. His lab will be moved from St. Louis to Pasadena over the next year.

In the meantime, Wang seems to be everywhere, delivering speeches, leading meetings and sitting on scientific advisory boards. "It's really nonstop, right? You have to sleep, but then, other than that, you try to work all the time," he says.

Wang has so many projects going that his lab now has teams working on four different floors of one research building at Washington University.

One of those projects is Wang's latest photoacoustic microscope, which occupies much of a metal workbench the size of a pingpong table. Jinyang Liang, a postdoc, shows me how the device turns light into sound and sound into images of a living brain.

"So that big guy, metal box there, is a laser," Liang tells me. During an experiment, the laser generates pulses of light that travel through a maze of mirrors and filters before reaching an anesthetized mouse on the other side of the table. 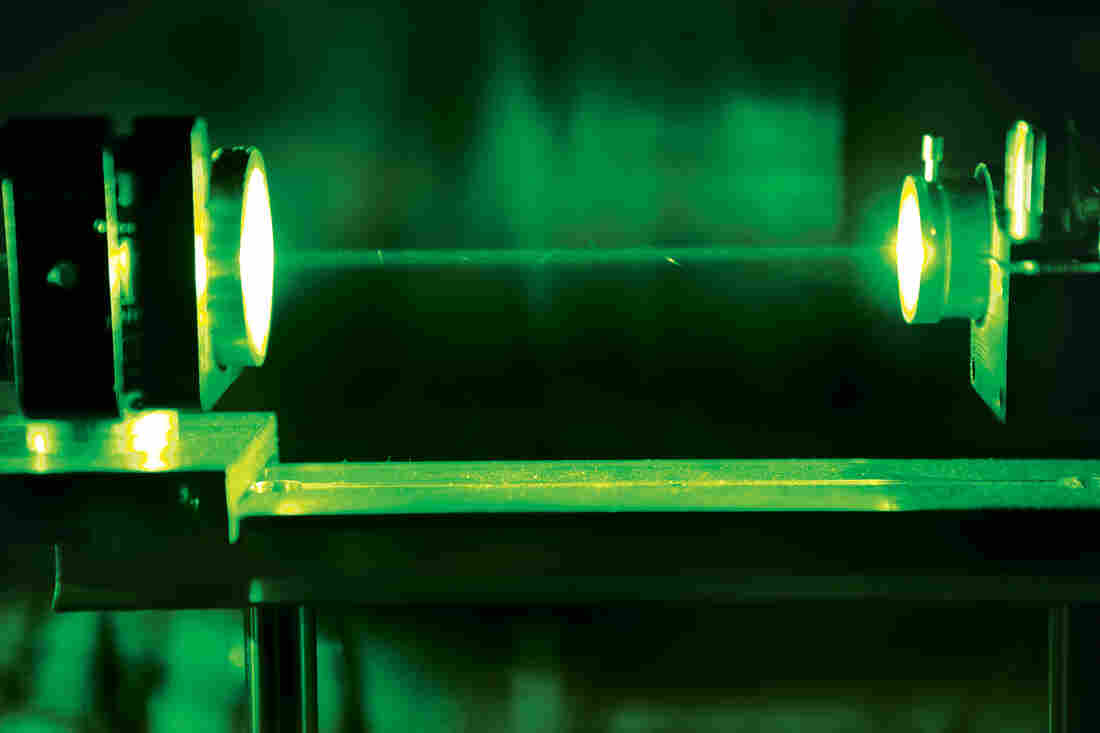 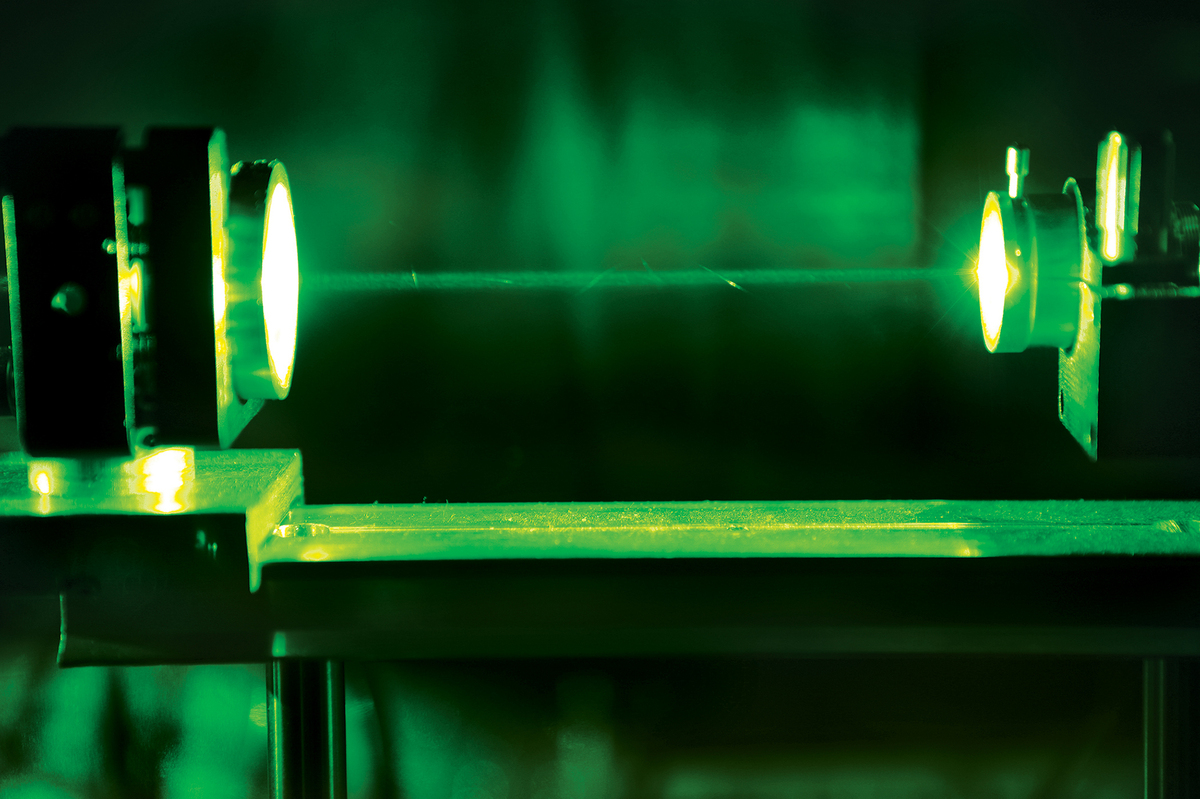 Once the pulses of light enter the mouse's skull and brain, they start to bounce around. But enough light energy gets through to cause molecules of brain tissue to vibrate. And those vibrations produce distinctive sound waves.

So light goes into the brain, and sounds come out. And just a few months ago, those sounds allowed a lab team to create high-speed, highly detailed, three-dimensional images of a mouse brain at work. "When I first saw that, I was amazed," Liang says.

So was Richard Conroy at the National Institute of Biomedical Imaging and Bioengineering. He says he's often amazed by Wang, who has been funded by the institute for more than a decade.

"He's one of these unique people who's able to take technologies and ideas from one field and apply them to a different field," Conroy says. "So, for example, his work trying to target light at individual cells within the body — that's really borrowing ideas from astronomy."

Photoacoustic imaging can do more than reveal the brain, Conroy says. Wang's lab has helped develop systems that use the technique to show tumors of the breast and skin, and even detect individual cancer cells in the bloodstream.

And Conroy says that's just the beginning. "It's research that really pushes the limits of our understanding of how to image in space and time," he says.

And that could eventually lead to devices as futuristic as the medical tricorder on the starship Enterprise, Conroy says. "It would be great to have a device like they had in Star Trek. You could just lie there, the beam of light would pass over you, it would be able to tell everything that was wrong with you."

Photoacoustic imaging can't do that yet. It still hasn't been used on a human brain. But Wang says he follows a simple rule in his lab: "Never say impossible."

And for Wang, that approach seems to work. A couple of years ago, he got some very special funding from the National Institutes of Health. "This is a grant that gives you unbridled funds for you to do anything you see fit, essentially," he says. "So we were really emboldened to explore very new directions."

One of those directions involved a camera. The goal was to build the fastest camera ever — a camera so fast it could take pictures of light itself.

Wang picked a small team that included Jinyang Liang, an expert in optics. "We thought, man, I mean, it sounds crazy, but can we see the propagation of light? Because that's literally the fastest object in the universe," Liang says.

Wang suggested an approach to achieve this seemingly impossible feat. And about six months later, the team was showing their boss the first movie ever of a pulse of light reflecting off a mirror.

"At the moment, I feel like he is speechless because, you know, no one has ever seen this before," Liang says.

Wang recalls being awed, but not exactly surprised. "Science really has no limit, you know," he says. "The minute that you reach one limit, you are trying to break it, trying to reach the next limit."

And for Wang, that next limit lies somewhere inside the black box that is the human brain.