Accessibility links
Gay Latinos Have Concern About PrEP HIV Prevention : Shots - Health News Lack of knowledge about the drug, and stigmas attached to sleeping with men and to perceived promiscuity, are major barriers to PrEP treatment. The costs and side effects are also concerns for many. 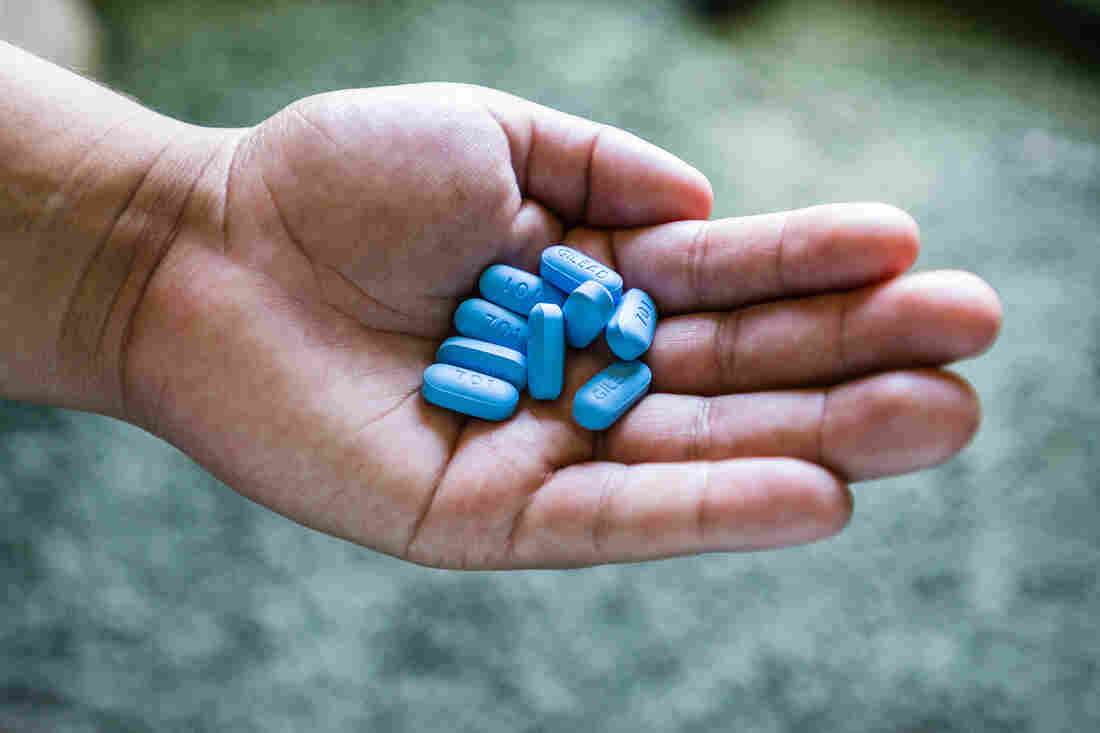 Louis Arevalo holds his Truvada pills at his home in Los Angeles. The drug can be over 90 percent effective at preventing spread of HIV. Heidi de Marco/Kaiser Health News hide caption 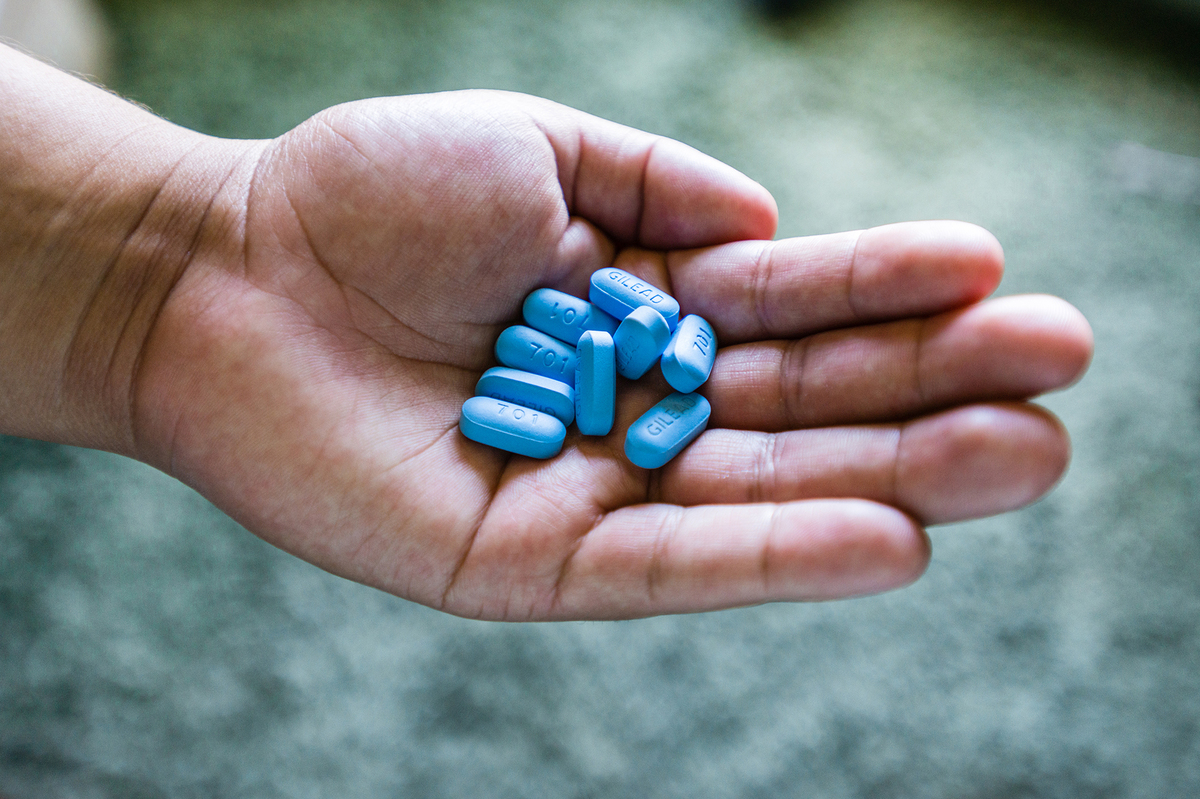 Louis Arevalo holds his Truvada pills at his home in Los Angeles. The drug can be over 90 percent effective at preventing spread of HIV.

At the New Jalisco Bar in downtown Los Angeles, a drag show featuring dancers dressed in sequined leotards and feathered headdresses draws a crowd on a Friday night, most of them gay Latino men.

Inside the bar and out, three health workers chat with customers, casually asking questions: Do you know about the HIV prevention pill? Would you consider taking it? A few men say they have never heard of it. Others simply say it isn't for them.

"It hasn't really hit the Latino community yet," Jesse Hinostroza, an HIV prevention specialist with AltaMed health clinics, says while sitting at a table with a bowl of condoms and a stack of bilingual pamphlets about the pill. "They aren't educated about it."

In California, New York, Texas and elsewhere, health workers are trying to get more high-risk Latino men to use the drug, Truvada. AltaMed's efforts are being paid for by Gilead, the pharmaceutical company that makes Truvada.

The medication, which is used for "pre-exposure prophylaxis," or PrEP, was approved by the FDA in 2012 for HIV prevention and has been shown to be more than 90 percent effective when used correctly. But health workers are encountering barriers among Latinos.

Those barriers include a lack of knowledge about the drug, and the stigmas attached to sleeping with men and to perceived promiscuity. Many Latinos also have concerns about costs and side effects.

"Even for people who have heard about it, [these concerns make] them reluctant to use, or hesitant to even inquire about, it," says Phillip Schnarrs, assistant professor of health promotion at the University of Texas at San Antonio and research director for the Austin PrEP Access Project.

Schnarrs, who is conducting a study with gay and bisexual Latino men in Texas, says 58 percent of those surveyed see themselves as good candidates for PrEP, compared with 82 percent of non-Hispanic whites, according to preliminary data.

In an ongoing study of 20 Latino gay couples in New York City, 37 of the 40 people had never heard about PrEP when interviewed last year, says Omar Martinez, assistant professor of social work at the Temple University College of Public Health.

Martinez says doctors and health workers need to focus on reaching young minority men at highest risk of getting HIV and transmitting it to others, including those who don't regularly use condoms.

"We need to do something," he says. "And PrEP may be the solution."

Latinos are disproportionately affected by HIV. They make up about 21 percent of new infections nationally, though they represent about 17 percent of the population, according to the Centers for Disease Control and Prevention. Latinos are also more likely than non-Hispanic whites and blacks to get diagnosed later in the course of their illness, raising the risks to their health and the likelihood of transmission to others.

At the same time, Latinos are less likely than non-Hispanic whites to be insured or have a regular doctor, although the Affordable Care Act has helped reduce that gap.

Truvada can cost up to $1,300 a month. Most insurance companies and Medicaid programs are covering at least part of that, and many local governments are also covering the pill for uninsured residents. But the high sticker price can dampen interest among patients.

Truvada, which blocks the virus from spreading in the body, is helping to significantly reduce new infections, says Robert Grant, a professor at the University of California, San Francisco School of Medicine who leads research on PrEP's effectiveness.

But the pill does not protect against other sexually transmitted diseases, requires daily use and can cause side effects in some patients, including kidney problems.

"It is a very valuable option, but it is only one option," Grant says. "Condoms are still a very important part of a sexual health strategy."

Back at the New Jalisco Bar, while customers dance to traditional Mexican music beneath a disco ball and rainbow lights, Jaime Cardenas conducts HIV tests in a mobile unit parked in front. Anyone who tests on the spot receives a free drink coupon, courtesy of AltaMed and the bar.

One of the first to agree is Erik Quezada, 35, a counselor at a Los Angeles high school. Cardenas draws a few drops of blood and within minutes gives Quezada the good news: He doesn't have HIV. Cardenas quickly follows up with information about the HIV prevention pill. Quezada says he has heard it's like a birth control pill for gay people. He agrees to be contacted by phone but quickly adds, "I don't know I would ever sign up for it." 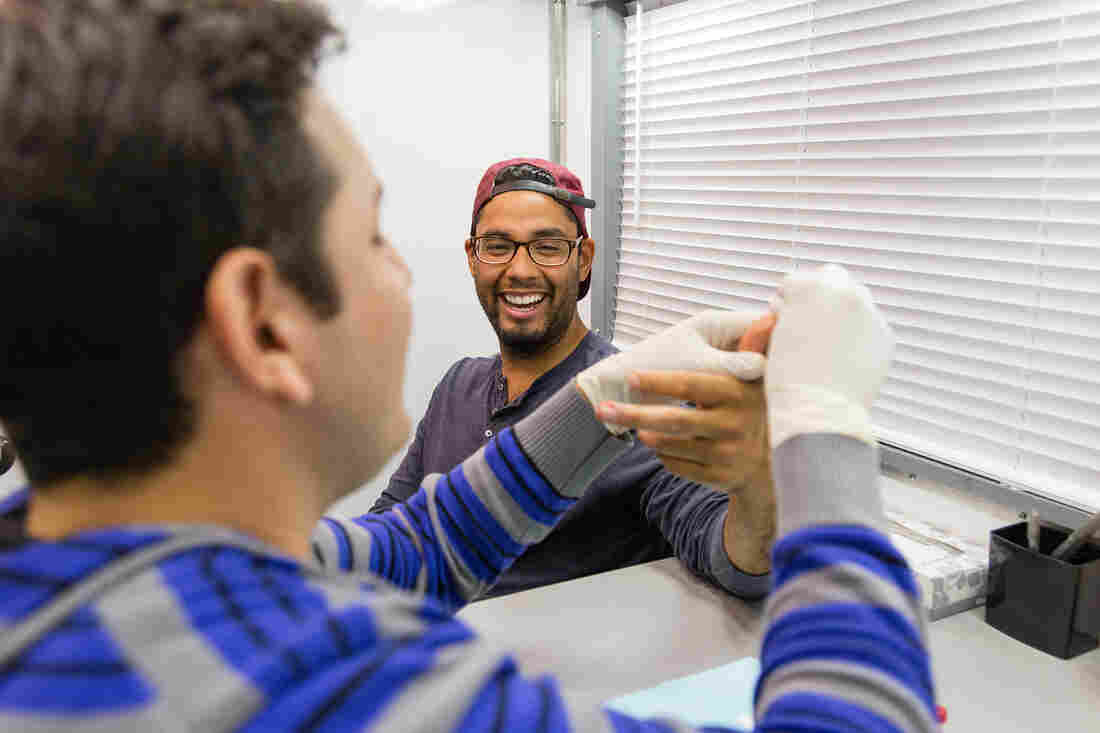 Erik Quezada, 35, says he has heard Truvada is like the birth-control pill for gay people. Quezada, a counselor at a Los Angeles high school, says he's not sure he would sign up for it. Heidi de Marco/Kaiser Health News hide caption 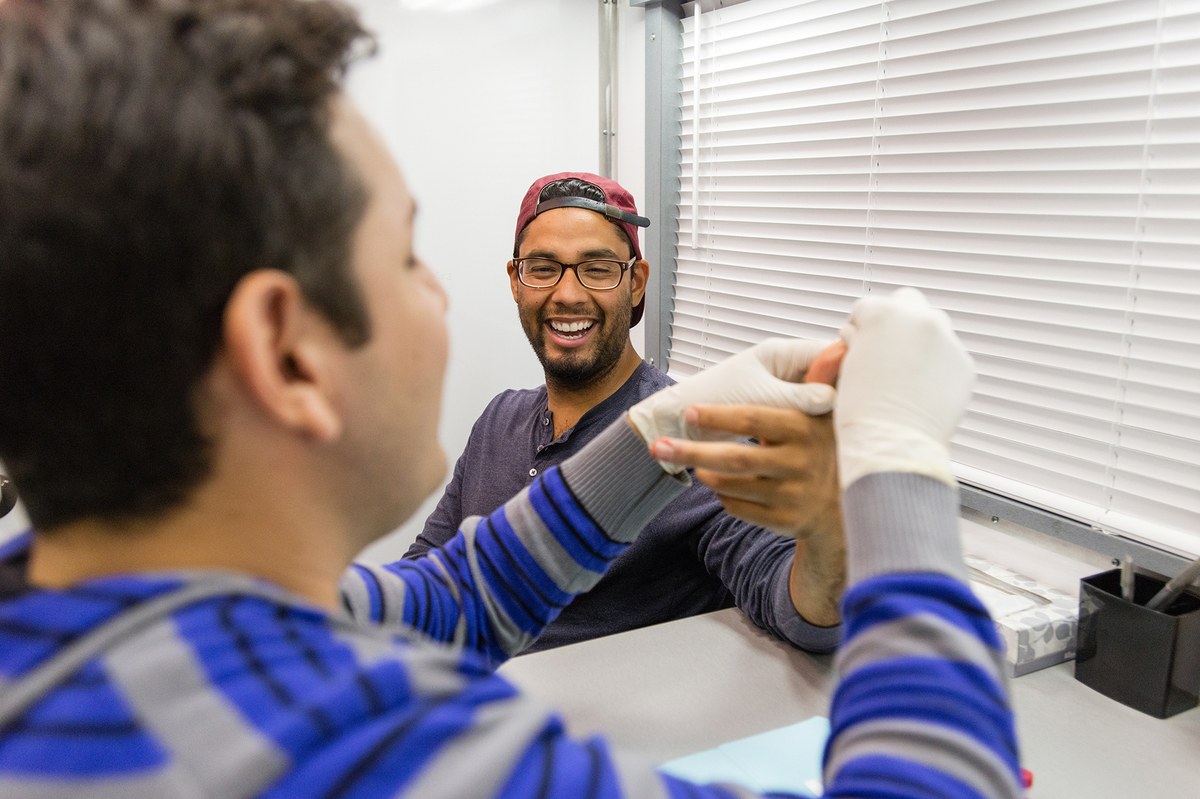 Erik Quezada, 35, says he has heard Truvada is like the birth-control pill for gay people. Quezada, a counselor at a Los Angeles high school, says he's not sure he would sign up for it.

Others are even less interested. Jose Arriola, 25, a self-described "diva," says he doesn't want to take any medication. "It's better to use condoms," he says, sitting by his boyfriend at the bar.

A short video produced by AltaMed plays between acts at the bar. The video features different Latino men getting dressed: a cowboy for a night out, a day laborer for work, a buff young man for the gym. Each takes the HIV-prevention pill as part of their routine.

"We are really trying to project the message that taking PrEP can be a normal part of your everyday life," says Dr. Scott Kim, medical director of HIV Services for AltaMed, which runs more than 40 health clinics in Southern California.

That, he hopes, will reduce stigma. Kim says health workers need to be more creative in places like East Los Angeles, where many gay and bisexual Latinos are still in the closet and aren't getting information through traditional health-care sources. Talking about PrEP at a doctor's office may not be as effective as doing so on social media, by text message or in a bar, he says.

"There are a lot of social obstacles and challenges we have to negotiate here because it's harder to be out," Kim says.

The goal of Gilead's $80,000 grant to AltaMed is to help 100 high-risk gay Latino men throughout Los Angeles County get prescriptions for PrEP. The grant pays for the outreach but does not cover the cost of the medication.

Since the project began late last month, about half a dozen patients have received prescriptions. Hinostroza of AltaMed says there is more interest and more knowledge in gay-friendly Hollywood and West Hollywood.

"But for East Los Angeles, where we are, it's a struggle," she says.

Louis Arevalo, 27, a college student and AltaMed patient who lives in Los Angeles, says he decided to go on the medication last month after getting scared when a condom broke. But Arevalo says he understands the stigma that might prevent others from taking the drug. For years, he says, he has hidden his boyfriends from his mother, an immigrant from El Salvador. Arevalo says her church pastor repeatedly says that homosexuality is a sin. 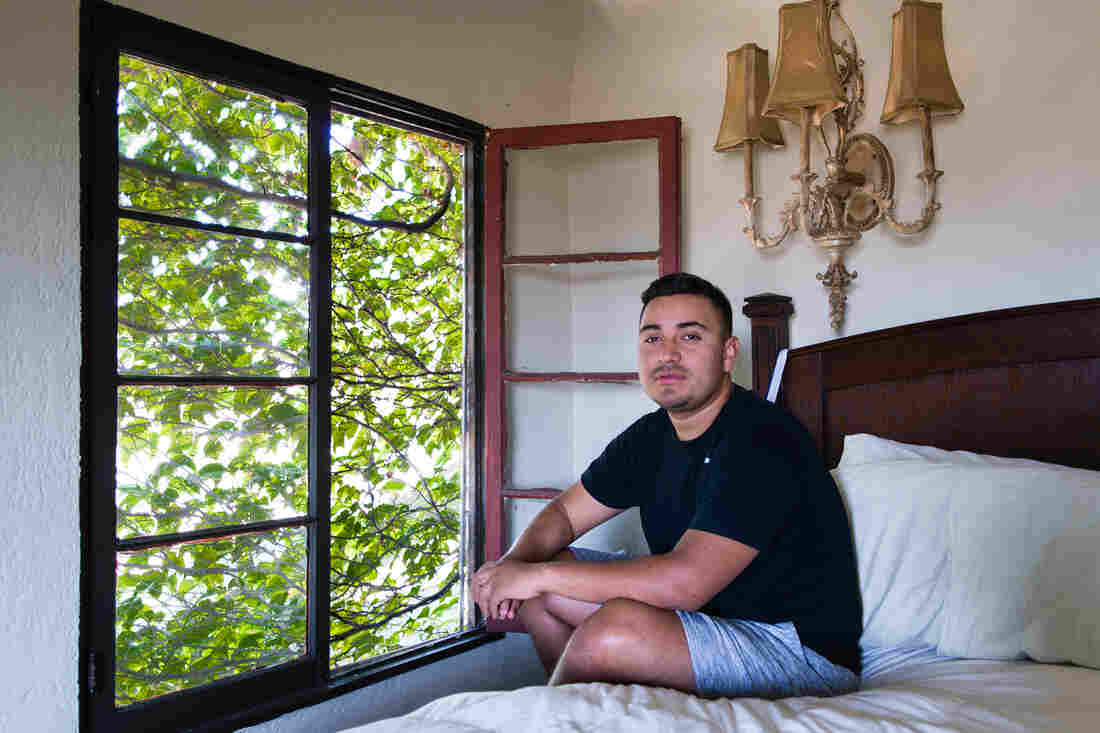 Louis Arevalo, 27, says he decided to go on the medication last month after getting scared when a condom broke. The college student from Los Angeles says he uses the pill as an extra layer of protection. Heidi de Marco/Kaiser Health News hide caption 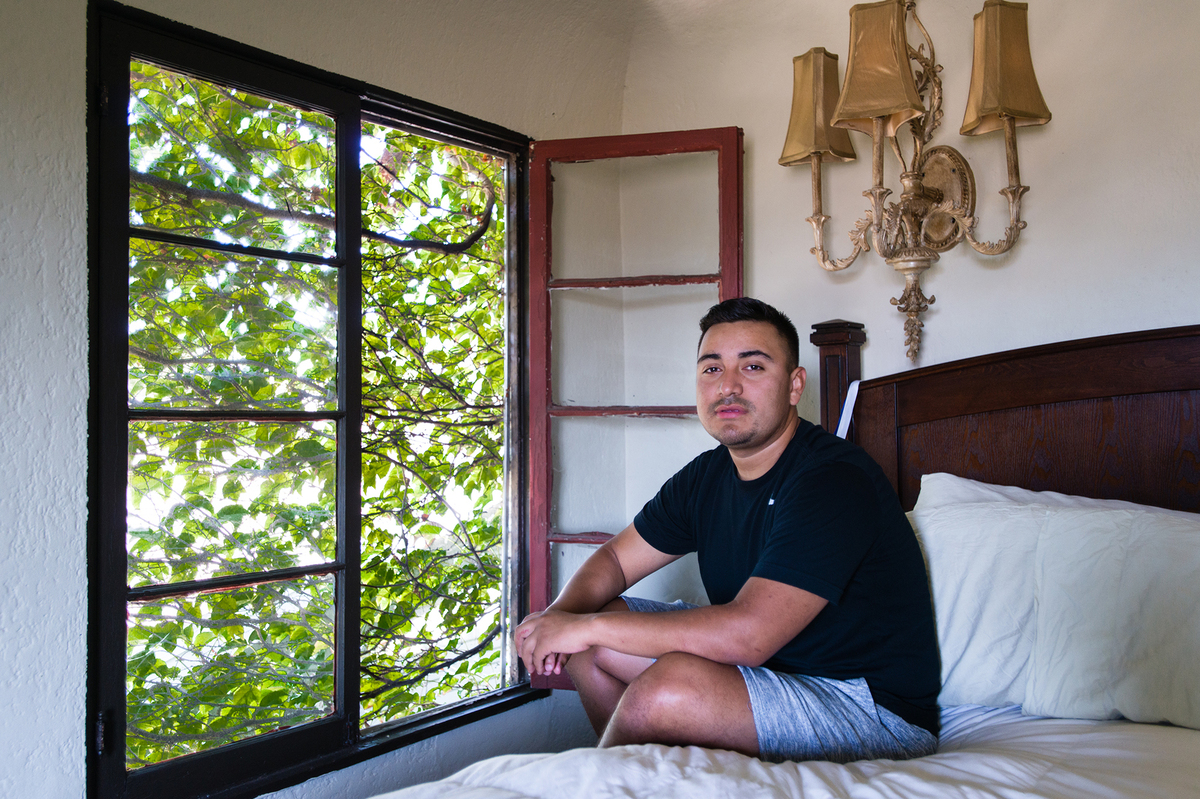 Louis Arevalo, 27, says he decided to go on the medication last month after getting scared when a condom broke. The college student from Los Angeles says he uses the pill as an extra layer of protection.

"It's just part of the culture, and it's the religion," he says.

AltaMed's efforts are just one part of a larger effort to get the word out about Truvada. The nonprofit Latino Commission on AIDS, based in New York, also recently started a campaign in five cities — Long Beach, Calif.; New York City; Chicago; Miami; and San Juan, Puerto Rico.

Gustavo Morales, the commission's director of access to care services, says now is the time to educate people about PrEP, lest too many people form negative opinions about it and health workers become "like salmon swimming against the current."

Morales says patients aren't the only ones who need more information. When he decided to go on PrEP late last year, he went to two different doctors who didn't know about Truvada. A third asked him why he wanted to poison himself. Finally, he got a prescription from an HIV specialist.

"I was definitely disappointed," says Morales. "There is a lot of work that still has to be done."