Accessibility links
Katrina's Emotional Legacy Includes Pain, Grief And Resilience : Shots - Health News Ten years after the storm some residents have found healing — in the arts, family and new opportunities. Others suffer lingering grief and other difficulties they trace to Katrina. 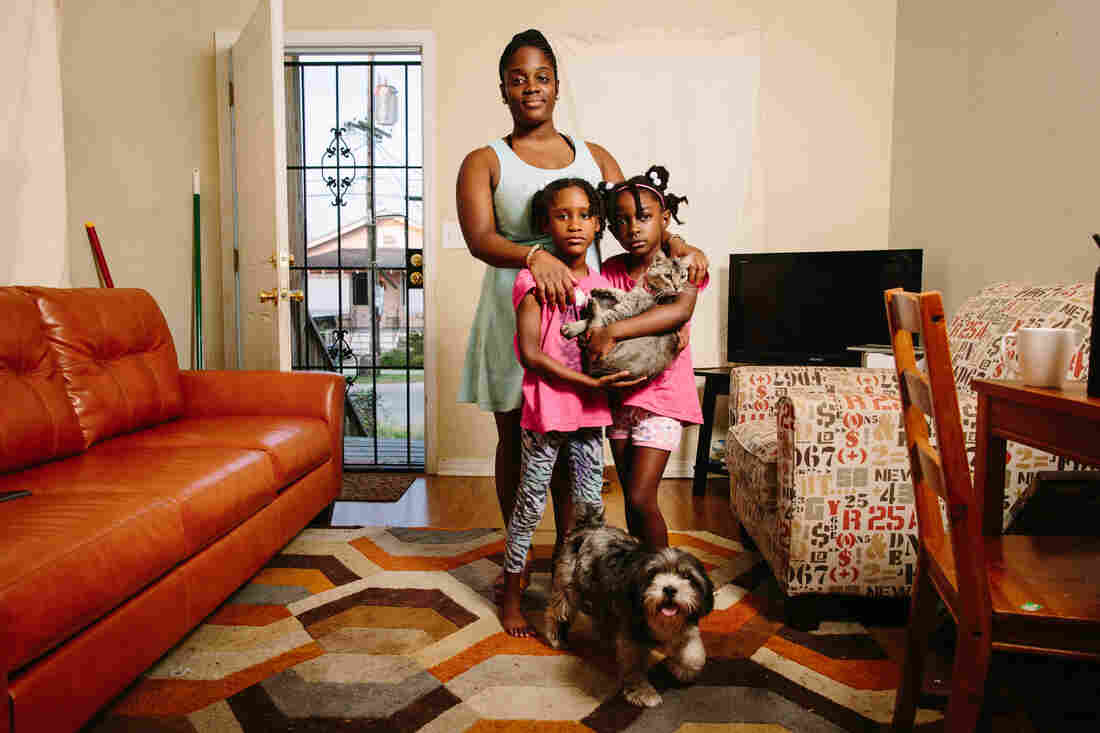 Dyha Gresham (front, left), her older sister Briceshanay (in back) and Briceshanay's daughter Uri stand in their New Orleans home with the family's cat Sugar-Pepper and dog Selena. After Katrina, Briceshanay says, she relied on theater and the arts to help her "move through terrible and difficult times." Edmund D. Fountain for NPR hide caption 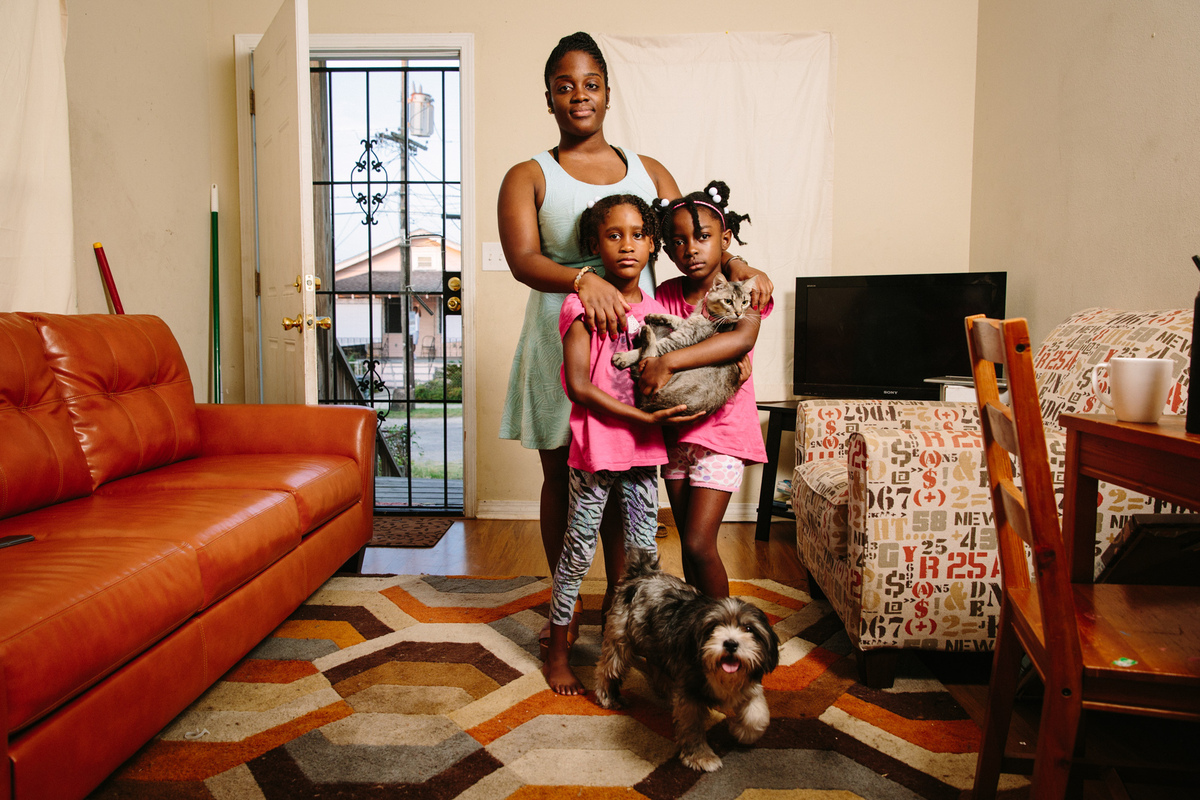 Dyha Gresham (front, left), her older sister Briceshanay (in back) and Briceshanay's daughter Uri stand in their New Orleans home with the family's cat Sugar-Pepper and dog Selena. After Katrina, Briceshanay says, she relied on theater and the arts to help her "move through terrible and difficult times."

When hurricane Katrina hit New Orleans in 2005 most residents evacuated safely. But thousands lost homes, careers, and the lives they had known. Since then, many seem to have recovered emotionally from the trauma. But some have not.

A recent poll from NPR and the Kaiser Family Foundation finds that today some people who survived Katrina say they still have difficulty sleeping and controlling emotion. Others have suffered strains on their marriage or had trouble with drugs or alcohol. Many trace the lingering difficulties to their experiences during Katrina.

Ermence Parent, for example, is a self-assured outgoing New Orleans attorney, and mother of two grown daughters. But today, 10 years after the storm, she's still grieving.

"I still have depression — major," she says.

When Katrina came crashing into the city 10 years ago, Parent was frantic over the whereabouts of her 87-year-old mother. The nursing home where her mother lived had told her before the storm that they had an evacuation plan. But then communication went down.

"I found out on CNN that my mother's nursing home had not evacuated," Parent remembers. "Several did not. And at one all the residents drowned — and we didn't know which one."

She called officials from the city, state and nursing home to see if her mother had survived. There was no word. Days passed. Finally, she turned to the Red Cross, who told her, "they had some lady who fit my mother's description — they didn't know her name."

The nursing home patients had been quickly transported with no identification documents, Parent learned.

"So they faxed me a photograph," she says. "And it wasn't my mother."

Later that day, Parent learned that the nursing home hadn't evacuated its residents after all, and 22 patients died. Her mother survived the immediate flooding; she'd been moved to the second floor to escape the water.

"They had been there all that week with no water," Parent says. "No air conditioning, no electricity, no food, no medicine — the whole week."

Eventually her mother was airlifted to a nursing home in Tennessee. When Parent and her siblings arrived at that facility, their mother's condition shocked them. The older woman wasn't speaking, and didn't recognize any of them. 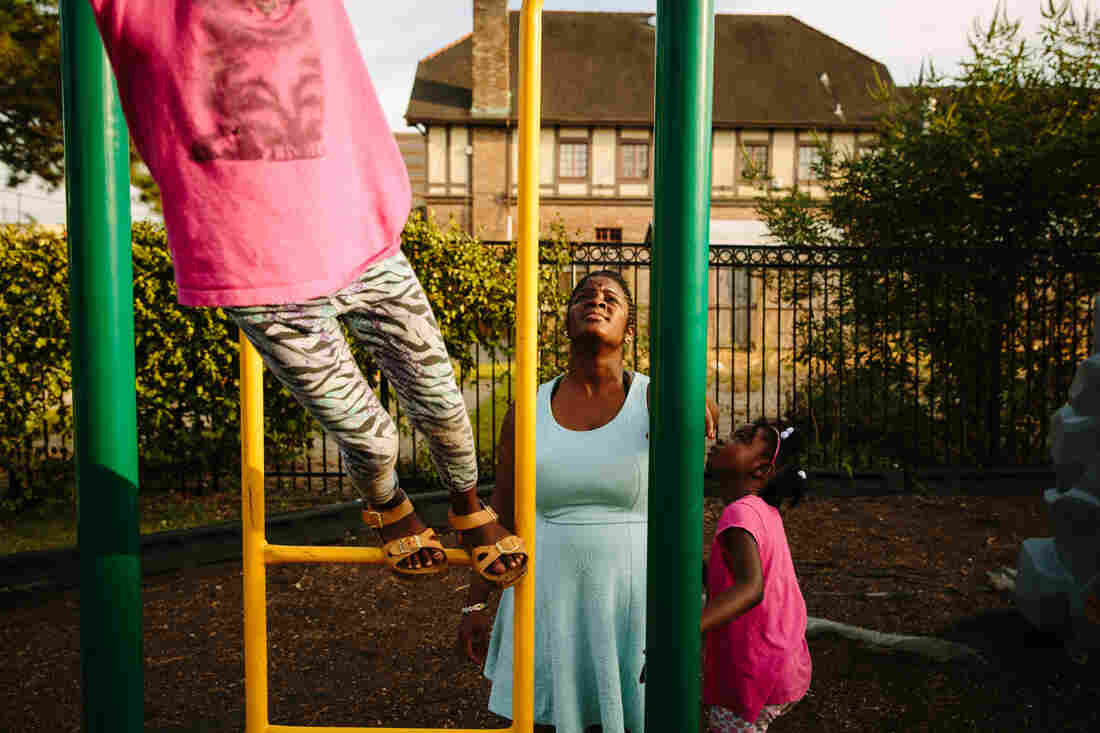 Briceshanay Gresham (center) takes her daughter Uri (right) and sister Dyha to their neighborhood playground in New Orleans. Briceshanay was in college during Katrina and escaped swirling, waist-high water with only the clothes she was wearing that day. Edmund D. Fountain for NPR hide caption 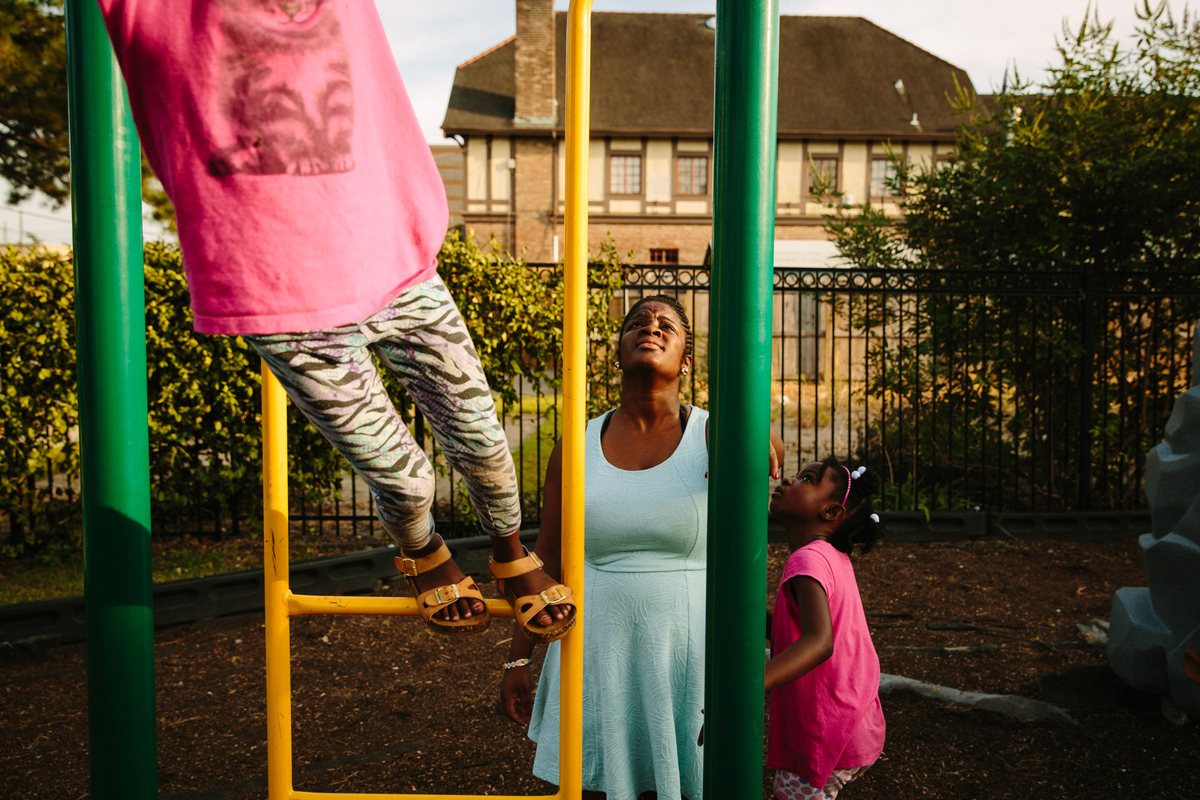 Briceshanay Gresham (center) takes her daughter Uri (right) and sister Dyha to their neighborhood playground in New Orleans. Briceshanay was in college during Katrina and escaped swirling, waist-high water with only the clothes she was wearing that day.

"She just wasn't there anymore — mentally or emotionally,' Parent says. "She was just so frail."

Parent's mother never recovered, and died within months. When Parent returned to her own home — which had been flooded with nearly 8 feet of water — it was destroyed.

Her law office downtown was also ruined. She and her husband Israel struggled to get insurance claims paid and get loans to rebuild. But they had no luck.

For her husband, Parent says, the stress was huge. Just months after her mother died, Israel Parent died of a massive heart attack. He was just 58 years old.

Ermence Parent has struggled with depression and grief ever since.

"The problem with mental health issues is they don't go away," she says. "You can try to bury them if you like, but they only get worse."

New Orleans health officials worry that the 10th anniversary, with all its media attention, will provoke terrible pain with the memories. So they've set up a city campaign of PSAs and hotlines to help residents find counseling. And therapists and psychologists, including Kim Vangeffen, are running workshops to help residents cope.

"My friends and I have been talking," Vangeffen says. "How much do we really want to pay attention to the anniversary — watch the news shows or not? Do we want to do something totally unrelated to the hurricane?"

She sees in her patients, her friends and herself a desire to escape every aspect of the commemoration.

"Particularly when so many things can bring back feelings of panic and grief," she says. Images, sounds — even smells.

"There's a smell we call the 'Katrina smell,' that was related to mold and mildew that grew on things," Vangeffen says. "I still have things in my garage that I have never fully gone through. And if I open those boxes you can still smell those smells — and it just brings you back to those times."

Still, overall, according to federal statistics, mental health problems aren't greater in New Orleans today than elsewhere in the country.

And the NPR-Kaiser poll of New Orleans residents includes some positive findings. Seventy-two percent of African American adults surveyed, and 79 percent of white adults, say they're better able to cope with stress today because of their experiences with Katrina.

Briceshanay Gresham, a New Orleans elementary school teacher, considers herself someone who emerged from the storm even stronger.

Ten years ago, Gresham was a freshman at the University of New Orleans. With the city's history of surviving hurricanes, she wasn't worried about Katrina — until school officials forced Gresham and her fellow students to evacuate.

Gresham recalls walking with her roommate down the street as the water started rushing — first around her ankles, then her knees, then her waist.

"I had the shirt on my back and the shoes, pants on my body," Gresham remembers. "That's all I had."

With help from her roommate's father, Gresham enrolled at a college in the state of Washington that offered scholarships to students evacuated from New Orleans.

Once there, she focused on the arts, and wrote a one-woman play. Writing and performing it helped her work through what had happened, Gresham says.

In her play, every character had a different pair of shoes. Gresham would switch from character to character by stepping into the different shoes.

And when it came to the question of returning to New Orleans, every character had their say.

"I had lined all the shoes up," Gresham says, "and the audience really didn't know if each character was going to come back. And then, I finally said, 'I am all these people — these are me, and these are my feelings. And I decided to come back because this is my city.' "

Gresham says she returned to New Orleans because she wanted "to be the person that's going to help rebuild, using the arts."

Alongside her work as a teacher today, Gresham is also studying — music therapy. 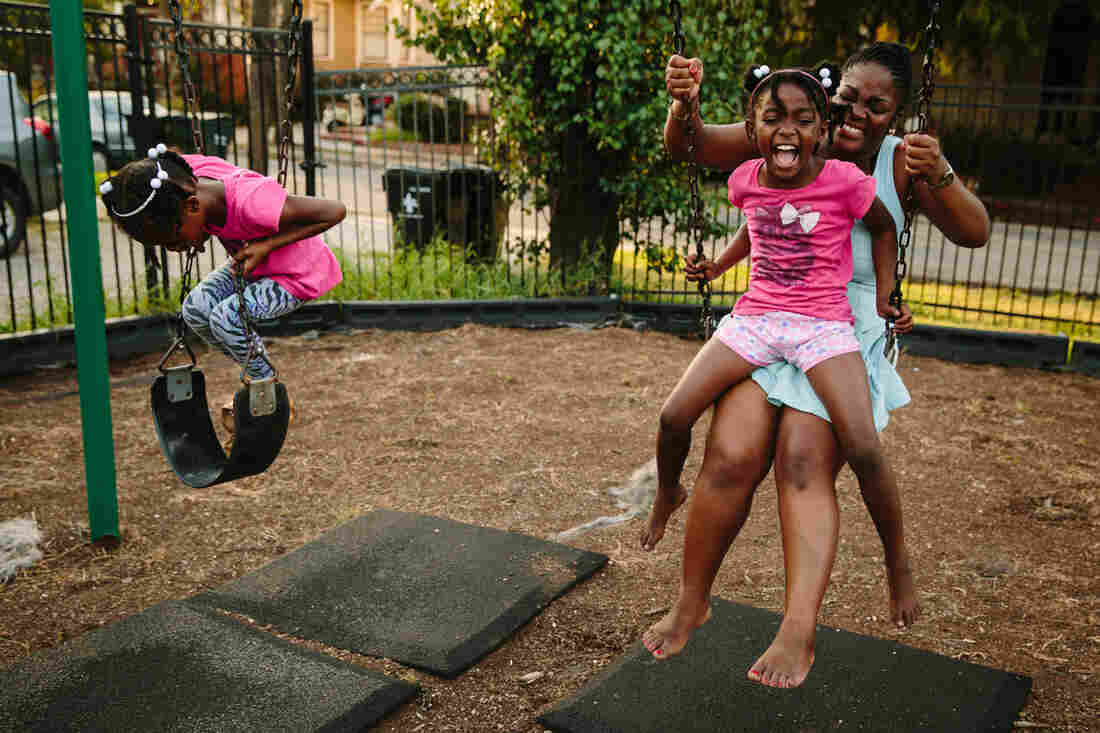 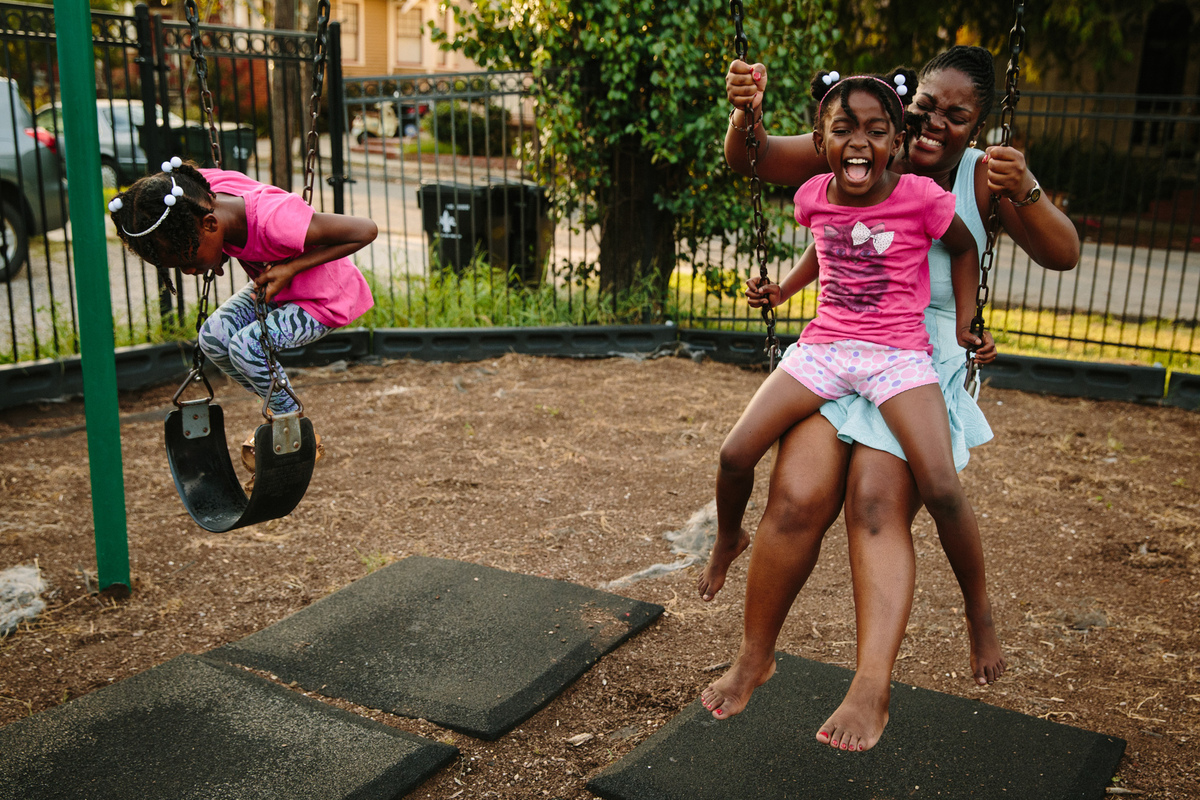 "I want to help kids to be able to do the same thing Katrina helped me to do," she says. "To use the arts to move through terrible and difficult times — use the arts to heal."

Recent research suggests that trauma can build strength. When Katrina hit, psychologist Jean Rhodes, at the University of Massachusetts and Harvard sociologist Mary Waters happened to be in the middle of a national study looking at social support and mental health issues among low-income single mothers.

The researchers were able to track down 334 of the study participants who had been living in New Orleans at the study's start. They found that 10 years after the storm, more than 60 percent of the women in the study had bounced back emotionally to where they were before Katrina. And more than half of these survivors of the storm had gone on to experience significant emotional growth — making positive life changes.

Before Katrina, "many of them had never expected to leave New Orleans or the relationships they were in," Rhodes says. But many did end up making those big changes after the storm — "because they lived through it," she says.

"And because they were able to be strong for themselves, their mothers, their children — they have a greater sense of their own strength, heightened spirituality and a stronger sense of new possibilities," says Rhodes. "An appreciation for life."