Accessibility links
When Rehab Might Help An Addict — But Insurance Won't Cover It : Shots - Health News Federal law requires insurance firms to cover treatment for addiction as they do treatment for other diseases. But some families say many drug users aren't getting the inpatient care they need. 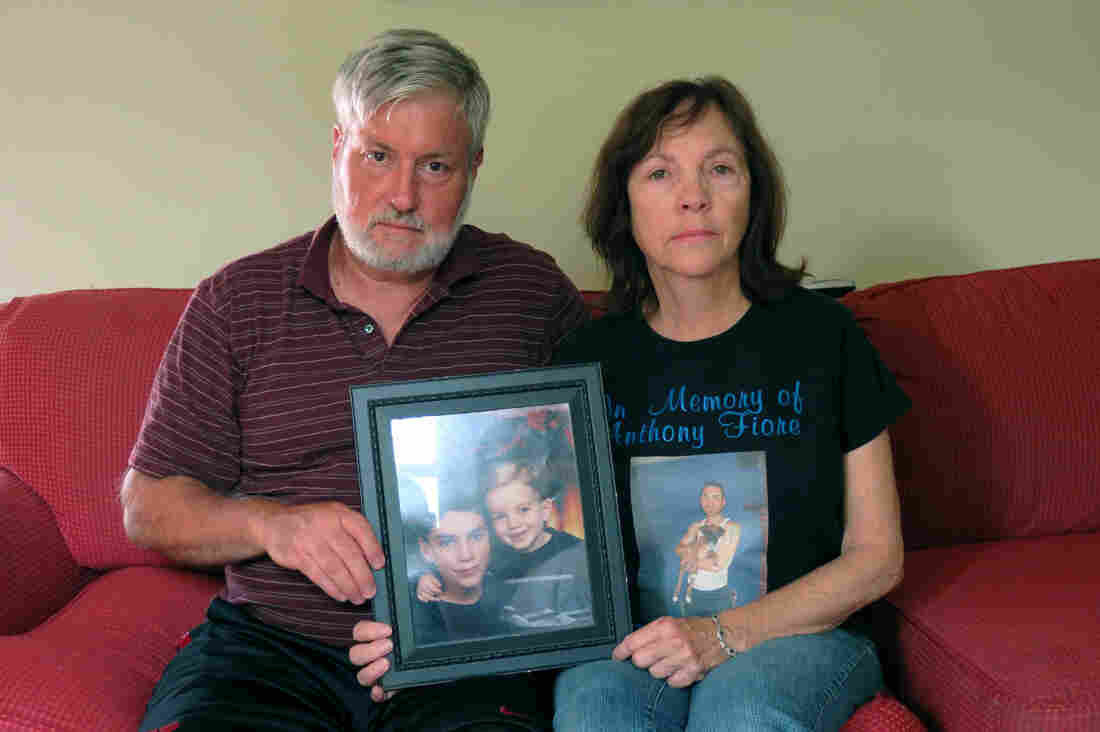 Cris and Valerie Fiore hold one of their favorite pictures of their sons Anthony (with the dark hair) and Nick. Anthony died from a heroin overdose in May 2014 at the age of 24. Cris Fiore's eulogy described his son's death as a shock, but "not a surprise." Anthony had been addicted to heroin for years. Ben Allen/WITF hide caption 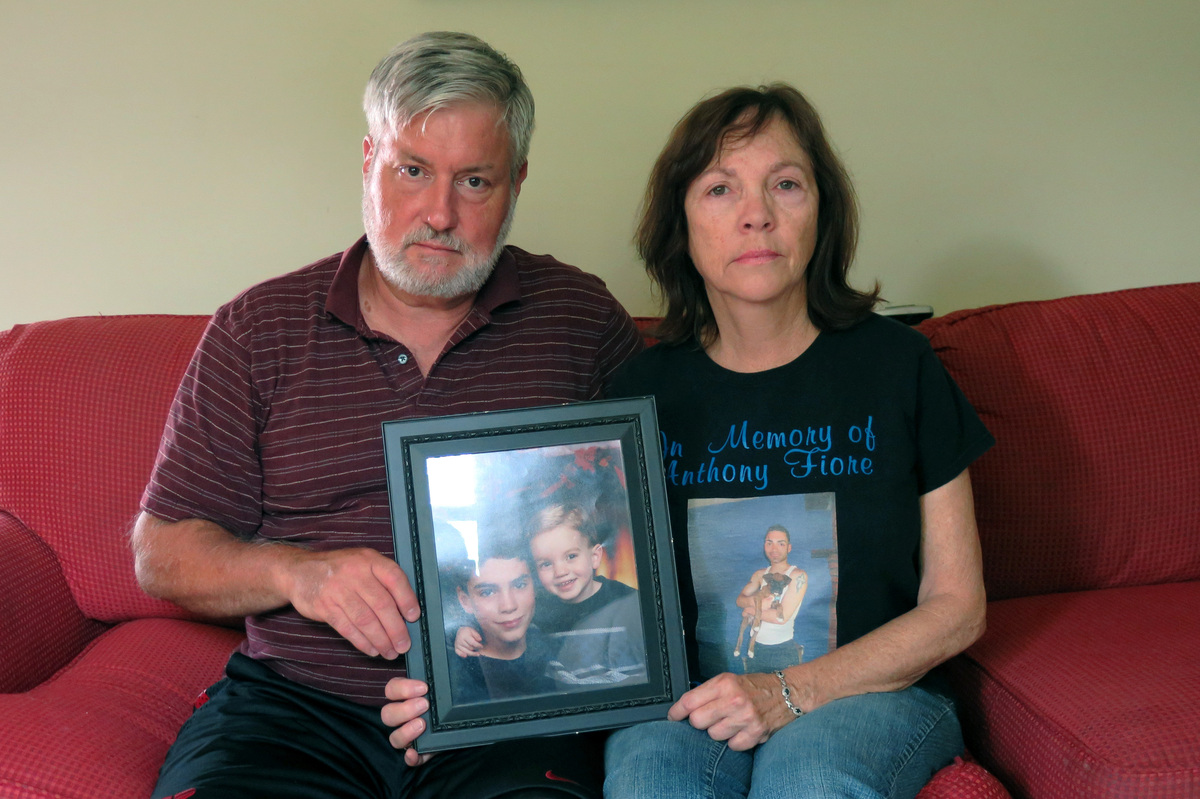 Cris and Valerie Fiore hold one of their favorite pictures of their sons Anthony (with the dark hair) and Nick. Anthony died from a heroin overdose in May 2014 at the age of 24. Cris Fiore's eulogy described his son's death as a shock, but "not a surprise." Anthony had been addicted to heroin for years.

Proposed solutions nationally include more government funding for treatment, tougher penalties for dealers, and proactive interventions to stop people before they start.

Now, a couple of parents who lost their son to a heroin overdose are pointing out that drug addiction doesn't tend to be treated like a disease in the United States — which means that when drug users want to get treatment, health insurance coverage often comes up short.

And until the prevailing thinking changes, these parents say, progress will only be made on the edges.

'Your Insurance Will Not Cover Any More'

Growing up in the Philadelphia suburb of Warrington, Anthony Fiore checked all the boxes for a typical American guy. He'd go to the gym, play video games and watch football — in his case, the Eagles. His mom, Valerie Fiore, was proud of him.

"Anthony was very intelligent," she says. "He breezed through his high school, Central Bucks South — he never studied. He aced his SATs. He got right into Penn State's main campus."

But before he could get to Penn State, the powerful painkiller Oxycontin got hold of him. Soon afterward, he moved on to heroin.

In May 2011, Anthony tried a 21-day rehabilitation stint in Florida. About a year later, he checked in to another facility, but only for 11 days. By the third attempt at inpatient rehab, Anthony said he really wanted to get help and would stick it out.

"That was a 21-day treatment. And that's when I had Premera Blue Cross," Fiore says. She begged the staff at the rehab-center to keep treating her son at their facility for longer than 21 days. "And that gentleman said to me, 'Your insurance will not cover any more.' "

The family couldn't afford to foot the bill for a longer stay, Valerie Fiore says. So Anthony left that facility in November 2013. Six months later, he was dead of a heroin overdose.

In a written response to the case, Premera Blue Cross said that its medical policies are informed by national experts.

Every case is different, but for most severe addiction problems, many treatment professionals recommend a sober inpatient stay of three to six weeks, plus intensive outpatient treatment that can include drugs like suboxone or methadone to ease the effects of cravings.

Clare Krusing with the trade group America's Health Insurance Plans says that when making a decision about whether or not to pay for a particular treatment, insurance plans are looking at effectiveness.

"It's taking into account the patient's health and how they respond to those treatments," she says. "There are many cases where, if patients need additional care and support, that is provided to them."

Valerie Fiore is skeptical; she says Anthony met the criteria for a longer stay.

Do Insurers Treat Addiction Like Other Illnesses, As Required?

Deb Beck, who represents the Drug and Alcohol Service Providers Organization of Pennsylvania, says she hears stories like Anthony's all the time. Facilities battle insurers to cover longer stays for patients, she says.

"The whole thing about who is worthy to have insurance coverage gets tangled into this," Beck says. "But if I had a heart problem, and I didn't do everything I was supposed to, I would not be denied coverage. In fact, if I got sicker, you would increase the coverage for me."

Under a 2008 federal law, insurers have to consider drug and alcohol addiction the same as any other medical problem, as far as access to treatment goes. The Department of Labor says it has investigated at least 140 claims in which a patient's parity rights were violated. All those claims have been resolved through discussions with the insurers, the agency says.

But advocates say the information isn't public, and no fines have been issued.

Krusing, with the insurance industry's trade group, says when treatment for addiction is so different from treatments for medical issues, it's hard to figure out exactly what parity looks like.

"When you're comparing those treatment plans, it's essentially comparing apples and oranges," she says. "And that's an inherent challenge for health plans, and for patients and for their providers."

But Sam Ball, the CEO of CASAColumbia, a substance abuse and addiction research organization, says insurance companies should recognize a longer inpatient stay that allows people to break away from bad influences.

What Heroin Addiction Tells Us About Changing Bad Habits

"[It] ... gives more time for planning about where they should be living after they get out of treatment," he says. "It also gives more time to be doing more extensive training on coping skills that they'll need once they leave the hospital or the program."

Meanwhile, Valerie Fiore is trying to cope with her son's death from overdose. She says she cries herself to sleep every night. Sometimes she sleeps in his bed. "I don't know," she says. "It maybe just makes me feel closer to him."

She says she's pushing for a change to the Affordable Care Act that would require insurance firms to offer at least 90 days of inpatient treatment in similar cases of drug addiction.

So far, Fiore has collected more than 30,000 signatures online. Many of the petitioners say they're endorsing the change on behalf of a relative, or a friend or themselves.