Accessibility links
Egg Freezing May Reduce Success Rate For IVF Births : Shots - Health News Women who used frozen donor eggs instead of fresh for IVF had lower odds of having a baby, a study finds. But doctors say frozen eggs remain a good option for many women. 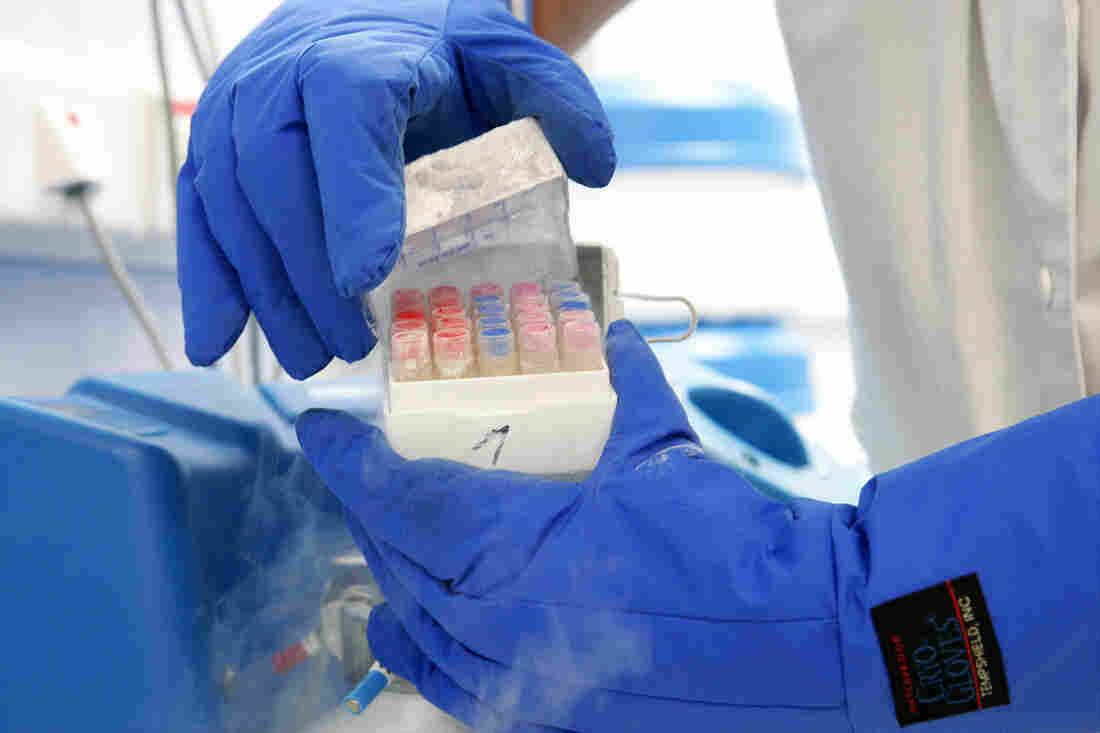 Eggs may be more vulnerable to freezing than embryos, but that's just one factor that affects the odds of having a baby with frozen eggs. Jean-Paul Chassenet/Science Source hide caption 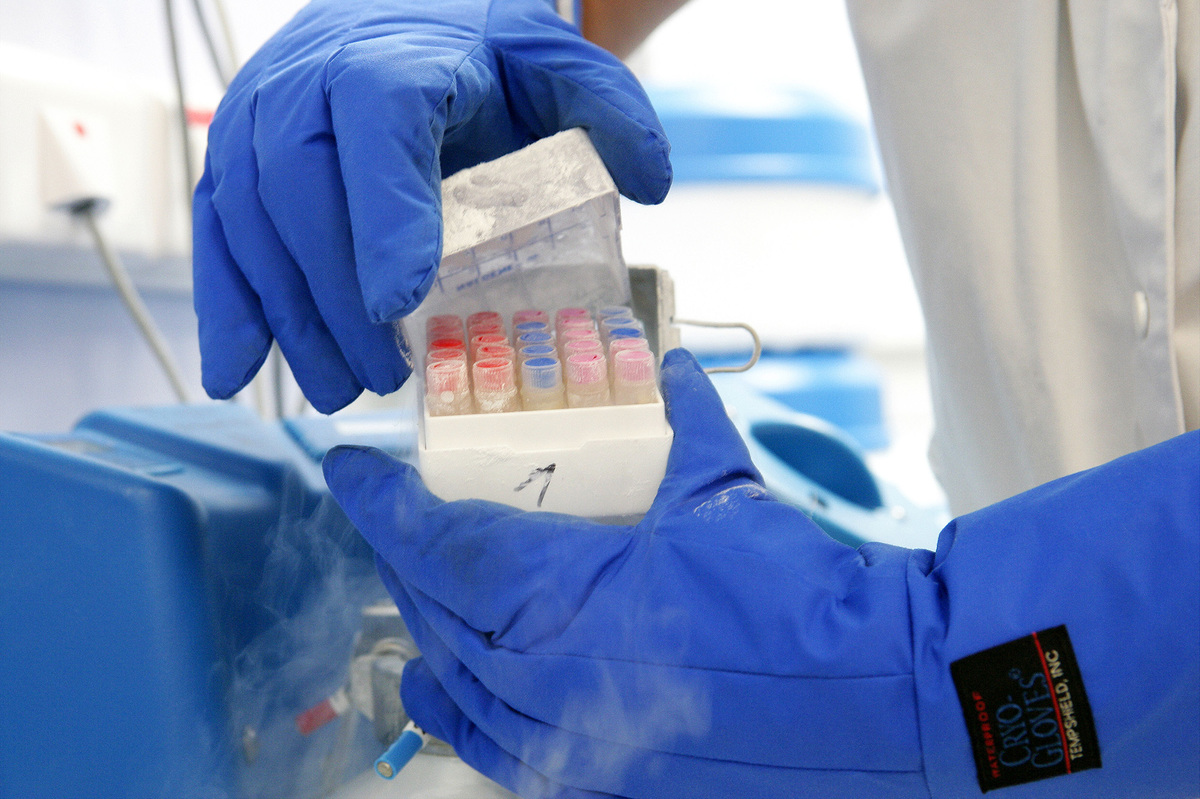 Eggs may be more vulnerable to freezing than embryos, but that's just one factor that affects the odds of having a baby with frozen eggs.

With egg freezing being touted as a way for women to potentially expand future childbearing options, the viability of those eggs when they're defrosted is still relatively unknown. The latest bit of guardedly good news is a short report in JAMA indicating that frozen eggs do indeed lead to live births after IVF nearly half the time — but that the odds of a live birth are almost 20 percent higher for IVF using fresh eggs.

The report, by Vitaly Kushnir and his colleagues at the Center for Human Reproduction in New York, is based on a retrospective analysis of success rates that U.S. fertility clinics send to the Society for Assisted Reproductive Technology. In 2013, donated eggs (as opposed to eggs from the would-be mother herself) were used in 11,148 IVF cycles. Most were fertilized and implanted as soon as they were retrieved, while 20 percent had been frozen after donation and were then thawed and fertilized. Kushnir and his colleagues looked at IVF success rates in terms of eventual live births and compared the rates for those using fresh donor eggs with those using frozen donor eggs.

It's hard to say what might account for this difference, Kushnir said. "The quality of the eggs could be somehow diminished by freezing and thawing." Or it could be explained by the fact that women who use frozen donor eggs get fewer eggs altogether, since they're split among a couple of recipients — and fewer eggs means fewer potential embryos.

In most clinics, a woman who uses a donor gets all the fresh eggs the donor produces — which, according to Dr. James Toner, president of SART, is usually about 15 to 20 mature eggs. But if she has to turn to frozen eggs from the egg bank, which he said are typically sold in batches of about half a dozen, she will usually have to share that batch with another woman.

Since fertility clinics these days implant just one or two embryos per cycle, "I think the difference in initial egg numbers in fresh versus frozen largely explains the difference in pregnancy rate," said Toner, who works at the Center for Reproductive Medicine in Atlanta.

So if you're using donor eggs, why opt for frozen instead of fresh? Two reasons, according to SART and the American Society of Reproductive Medicine, which issued a joint statement in response to the JAMA report. The first is cost: A cycle of IVF using donor eggs costs roughly half as much if the eggs are frozen — generally about $15,000 to $17,000 for frozen donor eggs, compared with $25,000 to $30,000 for fresh.

The second is convenience. As the SART/ASRM statement points out, using frozen donor eggs gives women "access to a wider field of donors and provides greater flexibility for both donors' and recipients' scheduling and coordination." These considerations, the group said, "may outweigh slightly lower success rates for some patients."

Unfortunately, it's hard to draw too many conclusions from this study about egg freezing as it's most commonly used these days: on eggs that are about a decade older than typical donor eggs, frozen by women in their late 30s who want to extend their fertility by a few more years.

Currently, though, the typical cryopreserver is much older — a single woman in her late 30s (one study put the average age of elective egg freezing at 37.4). Does the JAMA report say anything about how likely it is for that woman to have a child once she decides she's ready — which might not be until her 40s?

"That's the same question every other journalist asks," Kushnir told me.

And what do you tell them?

"Well, we can extrapolate from the data," he said, "but there's no direct evidence in this study" of how older eggs will fare when they are frozen and then thawed. All he can really say is that the odds of success are lower for frozen eggs than they are for fresh, which is probably as true for older eggs as it is for younger.

Older women can improve their chances of getting pregnant post-freezing, Kushnir added, by freezing an embryo instead of an egg, since embryos allow for a greater margin of error when they're defrosted.

"They're approximately the same size," he said, "but an egg is just one big huge cell. If you thaw it and it doesn't thaw well, you lose the whole cell." But an embryo is a group of cells, usually eight. "When you thaw the embryo, if some of those cells die — say, if only six of the eight survive the thaw — those cells are pluripotent and can continue to divide and grow and still produce a pregnancy."

But while freezing embryos might be a better option biologically, socially it's pretty much a nonstarter. A 37-year-old woman considering egg freezing generally doesn't have a partner whose sperm she wants to use to create an embryo; if she did, she might be choosing to get pregnant instead. And once you start thinking about using donor sperm to make an embryo to put in the deep freeze, thinking about using a donor egg when you're finally ready to have a baby might not be that far a leap.